Building Habitat Nests – For Wildlife and For Me

Over the last two winters, I’ve been engaged in a curious pursuit which has baffled some visitors but thrilled others – precisely the way I love to garden.  I’m building habitat nests – and it’s one of the most satisfying and artistically fulfilling projects I’ve worked on in some time. 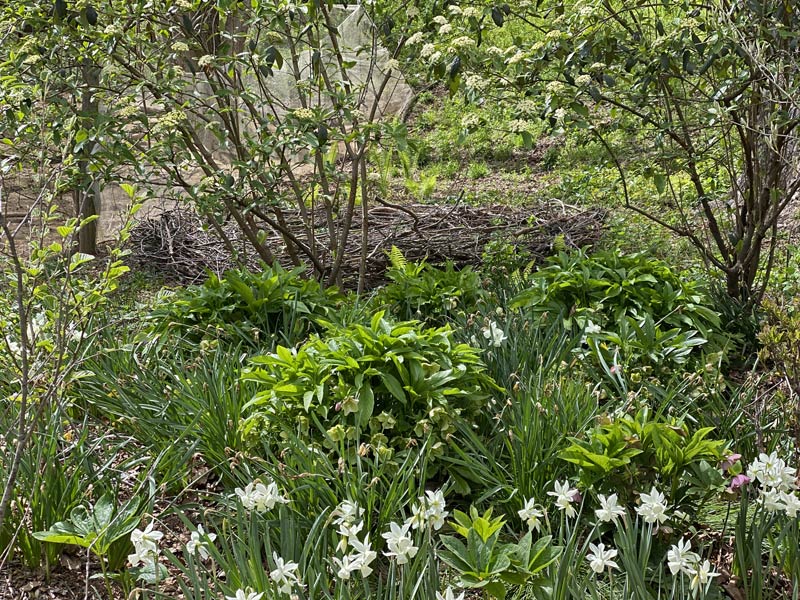 The newest nest (still under construction) near the barn garden.

Satisfying – as it utilizes the incredible amount of twigs and branches shed by an Eastern deciduous woodland onto lawns, beds, roofs and driveways…right along with the carcasses of various invasive brambles and aggressive natives. It does so without erasing their importance to the surrounding ecosystem by burning them or hauling them offsite; and creates habitat for insects and birds.

Artistically fulfilling – as carefully siting and building the nests within my woodland garden allows me to dabble in naturalistic and casual sculpture without set limits or rules.  They are one-of-a-kind and they are wonderful.

They are also large. Large enough to arrest the plodding of joggers out for a bit of fresh air as they try to figure out what species on earth is big enough to make nests this size — and why they’d choose residency in a rural corner of Northern Virginia when there are so many less people pretty much anywhere else.

At 12-15’ across, they’re enough to make you look over your shoulder when you first see them. At least that’s what my daughter’s boyfriend did, panicked by my husband who asked him if he knew where “something like that could even come from.” 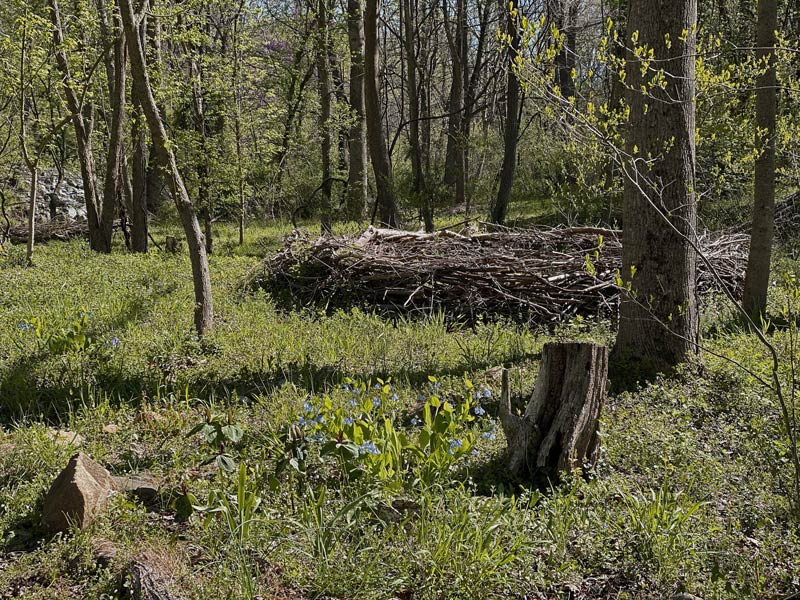 The first nest built in the woodland garden on an early spring morning.

Almost three years ago I visited the relatively new Delaware Botanic Gardens (DBG) in Dagsboro with a group of garden writers anxious to experience and photograph its main draw – the Piet Oudouf meadow gardens.

On a mid-fall day, it couldn’t have shown itself any better. Mature grasses and perennials covered in a russeting mix of seed heads and late bloom created a rich but subdued color palette that remains forever embedded in my memory. 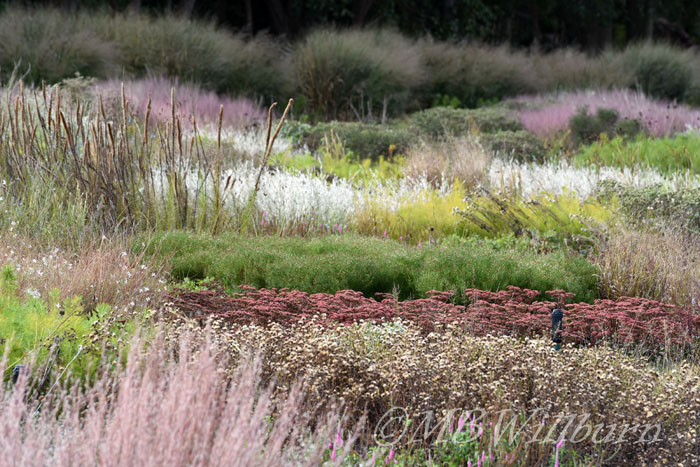 But The DBG had also begun a woodland garden, which reached down to the edge of the tidal waterfront at Pepper Creek and beckoned the visitor in with mulched paths edged in fallen logs. It too was a very new project, and as such, the clearing of invasive brambles and vines reflected a stark canvas that felt somewhat unnatural, but which in time would no doubt fill in as new native plantings took hold (watched carefully by a large team of invasive-hunting volunteers).

In contrast to my own woods – infested with those same impenetrable brambles and vines – the undertaking was inspiring.

And then it got even better.

Turning a corner early on in the walk, we came across a massive round nest built from twigs, vines and branches – probably twenty feet across and perhaps three feet high. Though it was completely unexpected – and quite obviously fantastical – it felt completely at home in its environment.

There was an opening on one side, and we all piled in and took a photo.  Throughout the walk, there were more nests to be found, all built by teams of volunteers originally headed by Gregg Tepper, Director of Horticulture at The DBG from 2013-2019. It was human artistry building upon the inherent artistry of nature and I was instantly smitten by the scale of the project and its quiet simplicity. 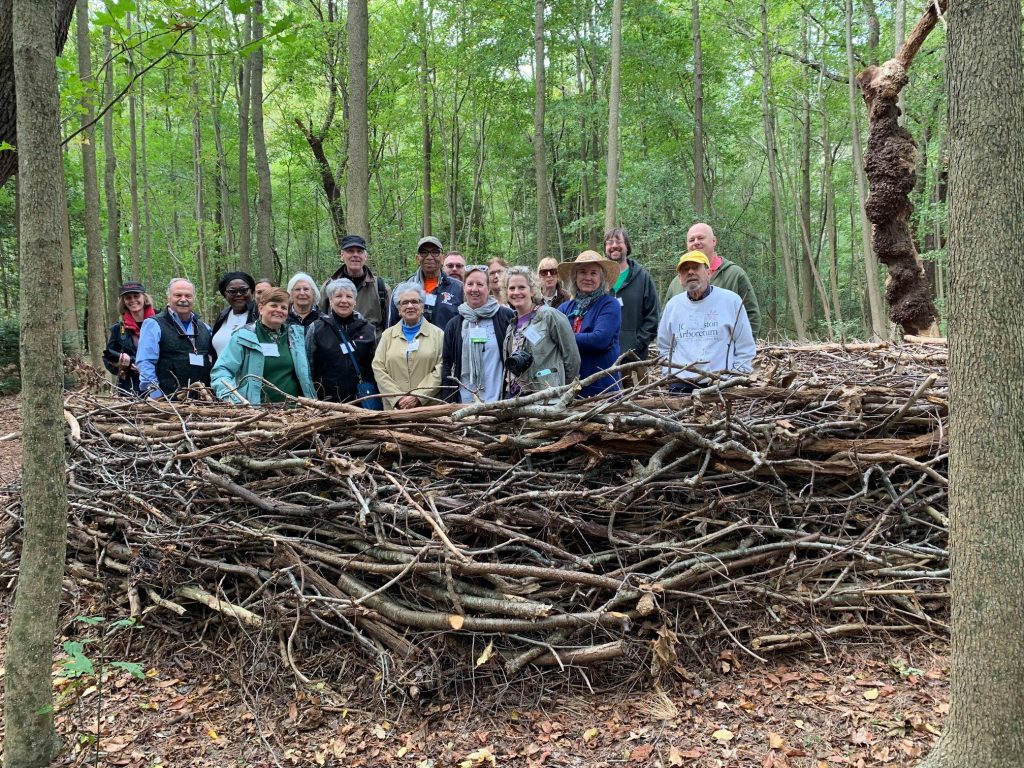 Garden writers nestle together at the DGB. Yours truly on far left. Photo credit: Kathy Jentz

I immediately went home and started my own nests in a small area of sunken woods originally carved out by an ancient creek meander. Compared to the acres of woods that surround me and consistently swallow precious plants the moment I turn my back, this half-acre is bordered by a creek and mown grass. Creating a woodland garden here has always felt finite and achievable.

After eight years on ten acres, I’m really into finite and achievable.

Over the previous two years I’d already begun to clear invasive brush and plant large amounts of mertensia, snowdrops, trillium and cyclamen throughout, but the idea of using something structural yet natural to accentuate a sense of place made perfect sense.

The concept of building a human-sized nest is not an original one. I have seen them in display gardens at shows such as The Philadelphia Flower Show and at Chelsea, as well as in other public gardens.  However, what I found unique at The DGB was the repetition of the nests throughout the woodland.  It wasn’t a one-off installation for a novelty photo-opp.  They felt completely and perfectly at home – linked together with purpose.

Much later I tracked down Gregg Tepper and spoke to him about these wonderful structures and what he hoped to accomplish with their installation. For Tepper, it’s more than just the nests. It’s about the perception and experience of walking through a woodland – a celebration of that sacred space.

Adding habitat nests to that experience:

In addition, many of The DBG nests are used as compost ‘bins’ for more herbaceous biomass.

In time, Tepper and his team began to copy nest-building techniques for different species; and looked forward to programs at The DBG where children might be instructed on different bird species through careful examination and hands on demonstrations. “Classrooms you can walk into.” he told me. 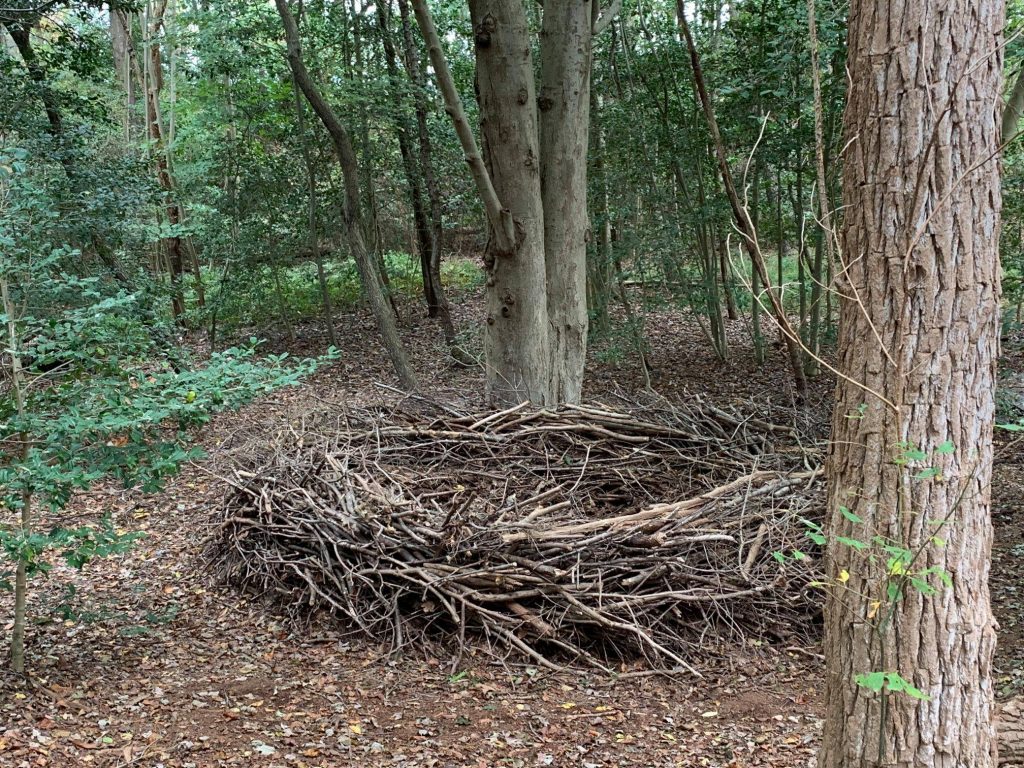 A smaller nest at the DGB. Photo credit: Kathy Jentz

How To Build a Habitat Nest

Since sharing the photos of my own habitat nests on Instagram @smalltowngardener, I’ve had people ask how to build them and I’ve promised videos that quite frankly take far longer to film and produce than to build the nest itself.  (Dammit Jim, I’m a writer and a gardener, not a YouTuber.)

I’ve got lots of footage on my phone needing attention, but until an intern shows up on my doorstep begging to work for pennies, it may take a while. So here are a few tips in the meantime:

Bottom line, it’s not rocket science. Start there, with confidence.  Then:

Again, this is your own creation.  Have fun and be aware that as the habitat nest ‘settles,’ you will need to come back and add material.   You’re working towards a height of 2 ½ to 3 feet.  “Ask yourself,” says Tepper, “Is it convincing, or is it contrived?”

You can work on your habitat nests all year round. The winter makes it easy to see twigs and fallen branches and cut down invasive saplings and vines. Summer leaves help you wedge material in tighter. Spring just feels like nest building season.  And who doesn’t want to work in the woods on a beautiful day in October? 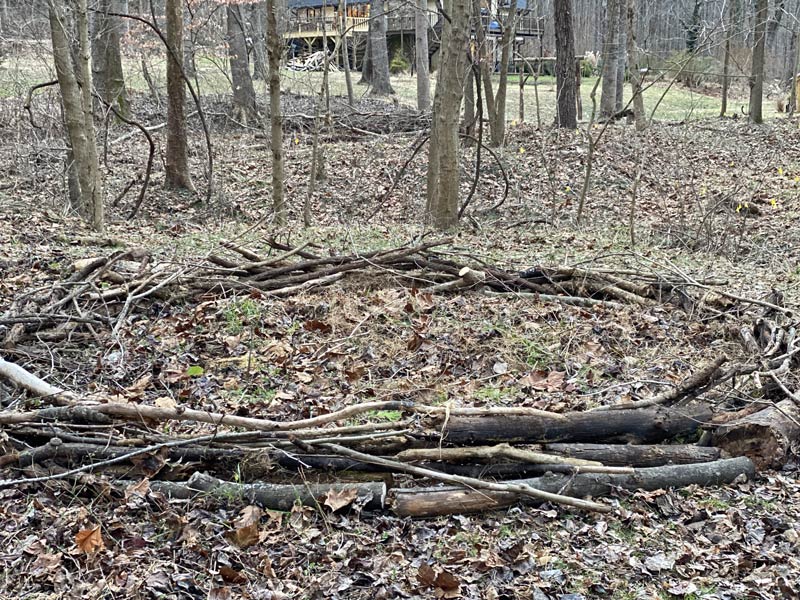 Putting together the outline of the second woodland nest last winter.

There’s one more aspect to nest building that goes beyond the art and the ecology of it all.  On difficult days – days when I’m feeling overwhelmed and more than a little ratty, and where even a little rough weeding will only make me think of all the weeding I can’t get to – I go to the nests.

Quietly and methodically inserting twigs lowers my blood pressure and concentrates my mind on thoughts I’m not giving myself time to sit with. And when I’m finished, I’ve built something.

This was Tepper’s experience too.  One volunteer who had recently lost her husband would often come and ask if she “could just work on a nest today.” They became unexpected places of healing for her. 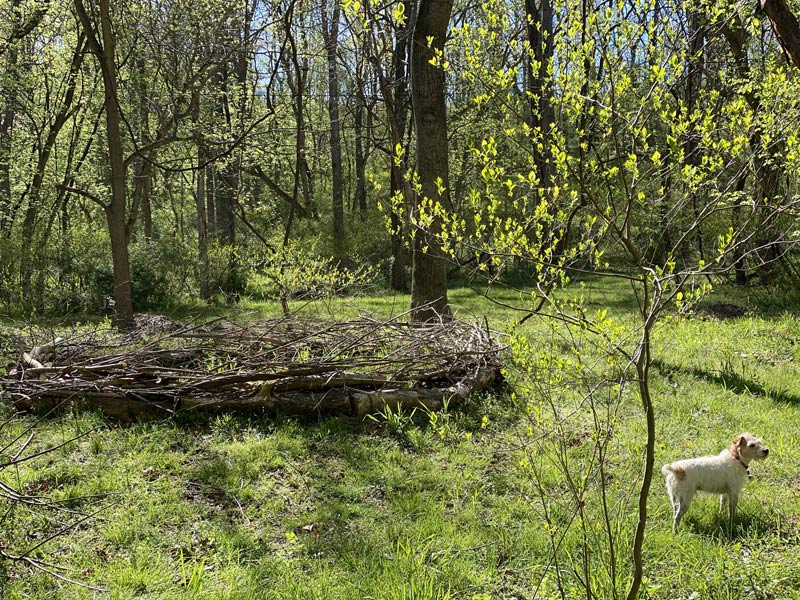 Habitat nest #2 under construction this spring. And my Jack Russell Mungo.

Are habitat nests a project for you?

I have to admit that not everyone’s a convert to habitat nest building 101.

Dee Nash, on the Gardenangelists podcast this week admitted that they “creeped [her] out.”  That perspective had simply never occurred to me, but I instantly forgave her heresy because she and fellow co-host Carol Michel had just finished enthusing about my new book Tropical Plants and How To Love Them, and it would be folly to think that garden features affect everyone the same way.

For instance, I’ve got some pretty heretical thoughts of my own about Chanticleer’s ruin I might share some time.

Over a couple drinks.

Room for just one? 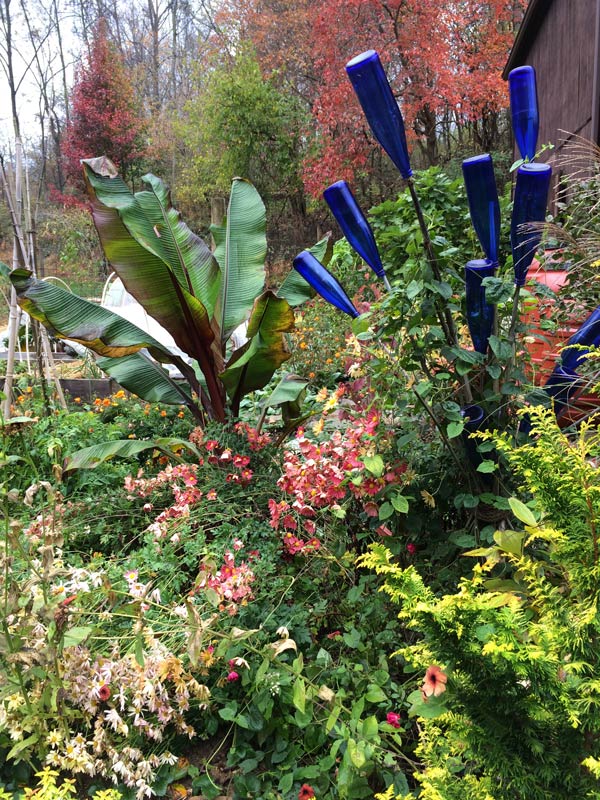 Okay so it’s not Chihuly…but I like to think it’s got a certain something.

I now have three habitat nests under construction in the woodland garden, and three more mapped out.  I might even say ‘professionally mapped out’ as Dan Scott, the new Associate Director at Meadowbrook in Philadelphia, visited last fall to walk around, examine lines of sight and set out markers with me. (And, at the same time take some cheap shots at my highly sophisticated bottle tree.)

With any luck I’m hoping that when I return the visit, I’ll be seeing some nests under construction in the woodland garden there, where I’m pretty sure visitors will love them as much as I do.  I’m also hoping to tempt Gregg Tepper down to see my efforts later this spring, counsel me on some good woodland natives for the site, and help me strategically add a nest or two.

It’s an easy project and an intensely fulfilling one.  Perhaps there’s room for one or two in your garden? – MW