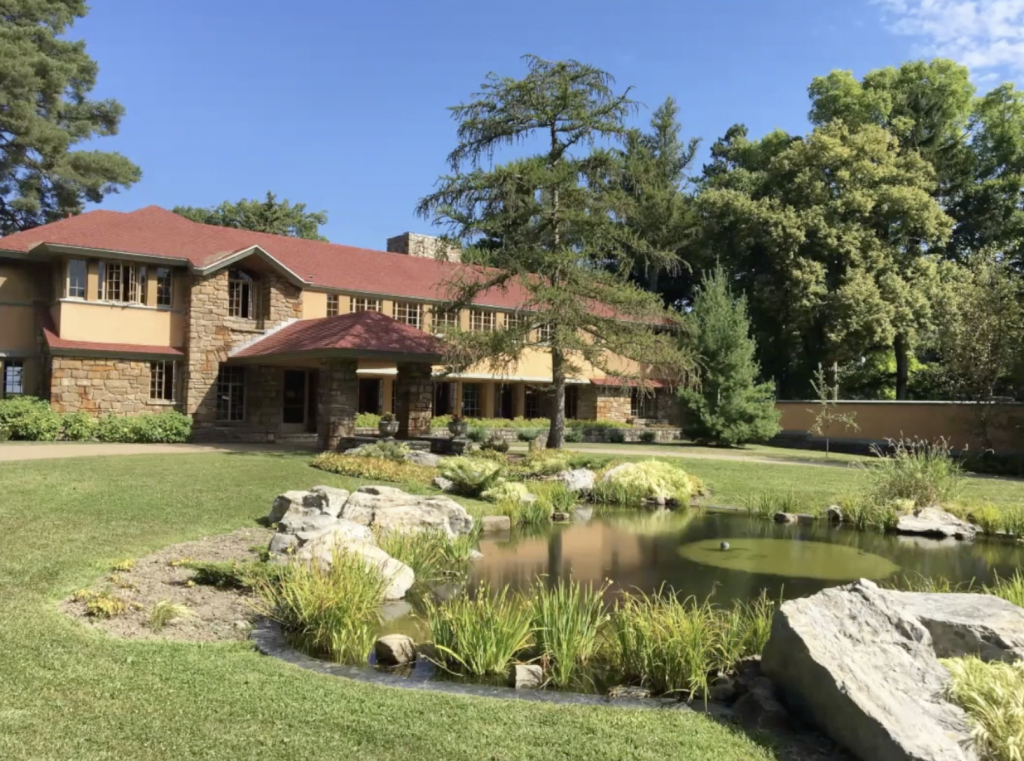 For decades, it was an overgrown tangle of weed trees and buckthorn, with its few original plantings nearly strangled by years of neglect. When attention was finally paid to Graycliff, Buffalo’s formerly magnificent lakeside structure by Frank Lloyd Wright, built as a summer home in 1926 for Darwin and Isabelle Martin, restoration of the residence had to come first. When that was finally done—ill-advised additions covering porches and more had to be eradicated and fixed—restoration of the landscape could begin. It was completed in 2013–2019.

It is a special landscape, one of several, most long gone, that Ellen Biddle Shipman completed in Buffalo.  In a recent online presentation by Graycliff Conservancy and Women in Horticulture, painter/horticulturalist Rebecca Allen, who commented, and horticulturalist Nellie Gardener, who led the restoration of the Graycliff landscape, talked about what was there, why it was there, and how it was brought back. 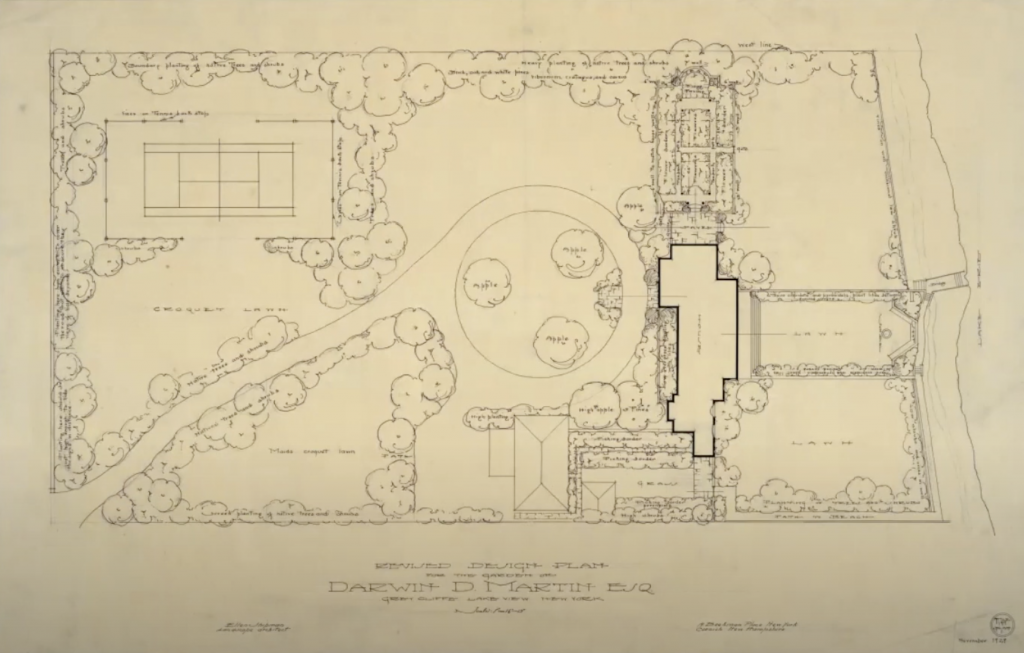 Shipman’s plan; Wright’s pond was restored where she has a circular planted area.

Shipman came to Buffalo in 1929, having already looked at Wright’s plans and sketched out her own. The major elements of her design included a long border, not too different from others she did throughout the US, including the Ladies Border at the New York Botanical Gardens, which was completed at about the same time as Graycliff. She also planted deciduous and evergreen trees in groups all over the property. In the restoration, these numbers were reduced—where Shipman had planted a group of 12 birches, Gardener planted 3, hoping to avoid the unmanageable density that would call for constant maintenance. 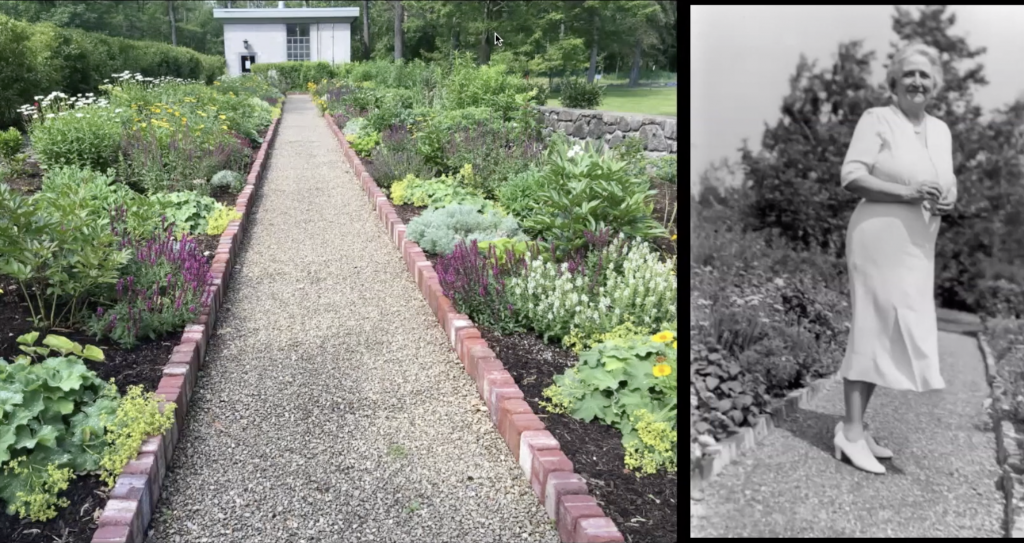 The border garden (shown above with archival image) was restored exactly as Shipman had planted with all 40 original plants. The restoration process required 2,000 yards of compost and 100 trees had to be removed, either because they were weed trees or species not in the original landscape. The original privet hedge was found and trimmed. A croquet lawn was restored. In a compromise, Wright’s pond, which Shipman had filled in, was brought back (as seen at top), so the garden would look exactly as it did in 1931, with elements from Shipman and Wright. 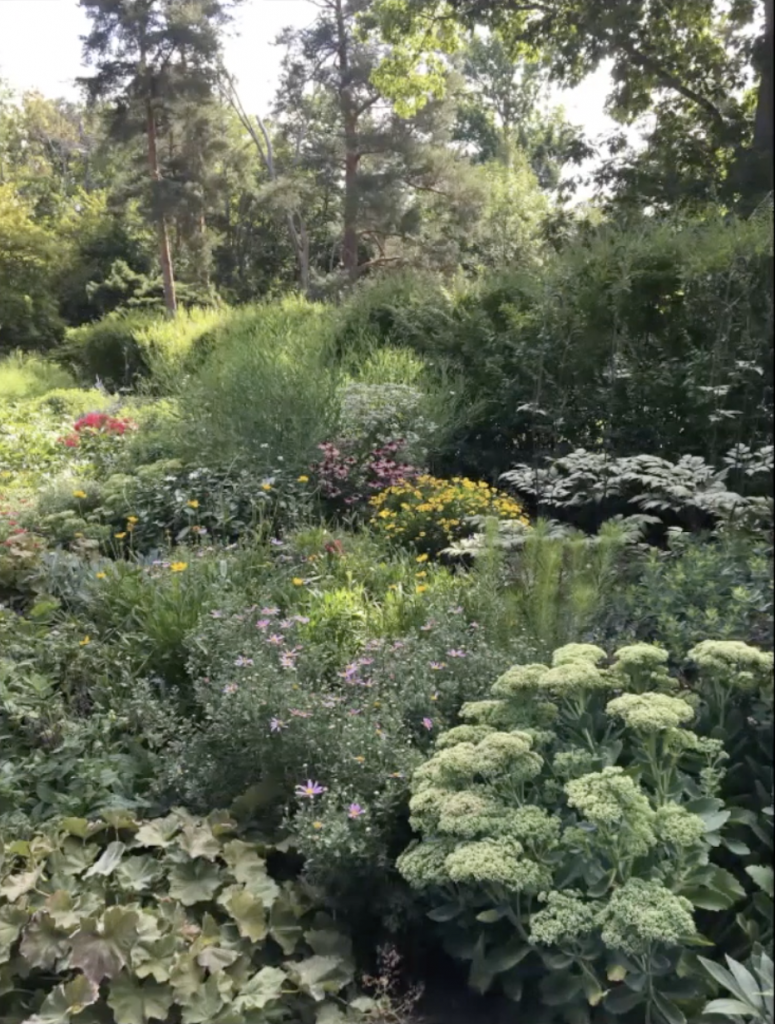 Now Buffalo has two original FLW-era landscapes on Frank Lloyd Wright properties. It’s interesting to consider the alternatives. What if Piet Oudolf had been brought in? Surely his sweeping vistas of natives would have fit in with prairie houses. Deborah Nevins, who’s created similar controlled chaos, comes to mind as well. Wild looks, within reason, would complement the drama of Graycliff’s Lake Erie perch pretty well and would work even better with the sleeker lines of the Martin Estate in town.

But I think the strict adherence to history that was followed here is cool as well. Paradoxically, the idea is to imagine these places as they looked when they were filled with family life.  And with Isabelle Martin’s exquisite floral arrangements—straight from her garden—in every room.

All images here are screenshots from the Ellen Biddle Shipman webinar, presented by Graycliff and Women in Horticulture. That explains the blurriness of the images, but there is no way this landscape would look like this now. Better pictures to come later in the season.