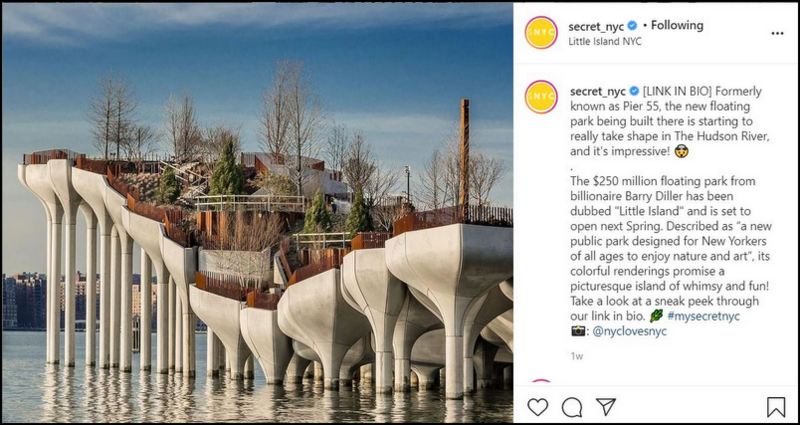 When a friend spotted this image in the Secret NYCC Instagram feed, she alerted me immediately because – I mean my God! What IS it?

Well, it’s a 2.4-acre floating island in the Hudson River off the west side of Manhattan that is sure to be the next BIG thing in gardeny tourist attractions after its opening this spring. It’ll be helped by proximity to the OTHER hot gardeny place to go – The High Line. That wildly popular elevated garden and the new one – called Little Island – were both instigated by billionaire Barry Diller and his wife Diane von Furstenberg. Diller may say that Little Island is “for New Yorkers of all ages to enjoy nature and art,” but thankfully there’s no residency requirement and I’ll be visiting as soon as possible! Safely, of course. I’m not stupid.

Little Island will be home to “35 species of trees, 65 species of shrubs, and 270 varieties of grasses, perennials, vines and bulbs. Essentially, it will be like going to the Brooklyn Botanic Garden where you don’t have to be a horticulturist to enjoy being there,” according to the designer. Source.

In choosing the species, 70 percent of which are native, the designers consulted with the Hudson River Park Trust to find species with a “high survival rate.” That windy site surrounded by water must be a challenge!

Enjoy some more images from the design presentation, and a fascinating video by the landscape designer. What impresses me most is the designers’ focus on creating wonderful experiences OF nature and IN nature for US HUMANS.

That experience starts with a dramatic first look.

Once visitors walk through the vaulted opening of Little Island, they’ll walk into an open lawn and get a 360-degree view of the park, where they’ll see a gradient of colors and plantings that change as the elevation changes, from shrubs and vines to 40-foot trees, Nielsen said.

Visitors can opt to walk up to Little Island’s highest points via walkways, or they can do a bit of light scrambling up boulders, much like at The Hills on Governors Island. Along the way, Nielsen and her team have planted a variety of perennials and grasses, 70 percent of which are native to New York and many of which are pollinators to help the bee population thrive. Some plants were chosen to flop over the top of industrial sheet piles that divide the space into curvilinear paths and mimic the round shape of the huge piles holding up the park, creating a cascade of greenery. The overall effect is to have people feel “engulfed in plants,” said Nielsen.

There will also be three main lawns that visitors can sunbathe on (because let’s face it, New Yorkers love to catch some rays), and a secret garden full of only white blooms—from birch trees and crepe myrtles to roses and anemones that you can get to by walking through an arched trellis.

Next to the secret garden, a small amphitheater called The Glade will host shows and other events with the river and neighboring pier as its backdrop. Similarly, the main amphitheater will hold bigger performances right on the water.

Below, Signe Nielsen, landscape architect and founding member of the firm MNLA, describes the project.

Visiting Little Island will be the perfect addition to a day trip to NYC, like my 2018 trip via Bolt Bus. It’s close to not only The High Line but also the apartment of a former garden-coaching client of mine, so we meet for lunch. She left Maryland to move into the same West Village building that her son lives in.