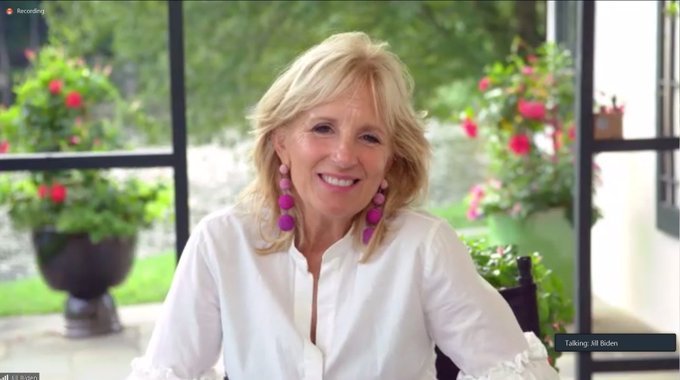 Now that almost everyone concedes that the Bidens will be moving into the White House soon (hopefully, soon enough!), local garden writers like me are pondering what admittedly is the least important question about the transition – will it affect the White House gardens?

First, let’s go to the photos, like the one above of Dr. Biden doing a campaign video from their home in Wilmington. Whether she gardens or not, she clearly HAS a garden, and it looks lovely. 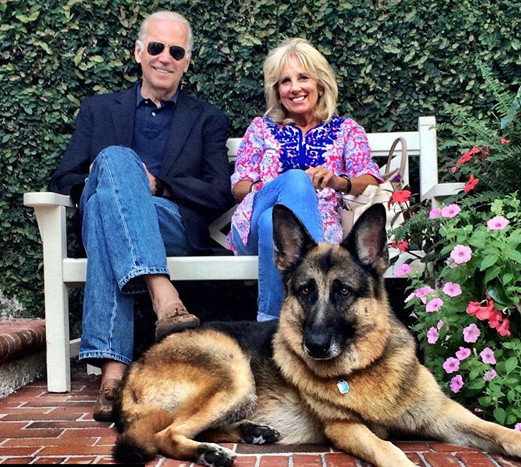 Here’s another photo, presumably in their Wilmington garden, with Champ.

That doesn’t tell us whether she (or her husband) actually gardens, of course, so I tried googling their names with “garden” and “gardening” and the results were slim and unhelpful. 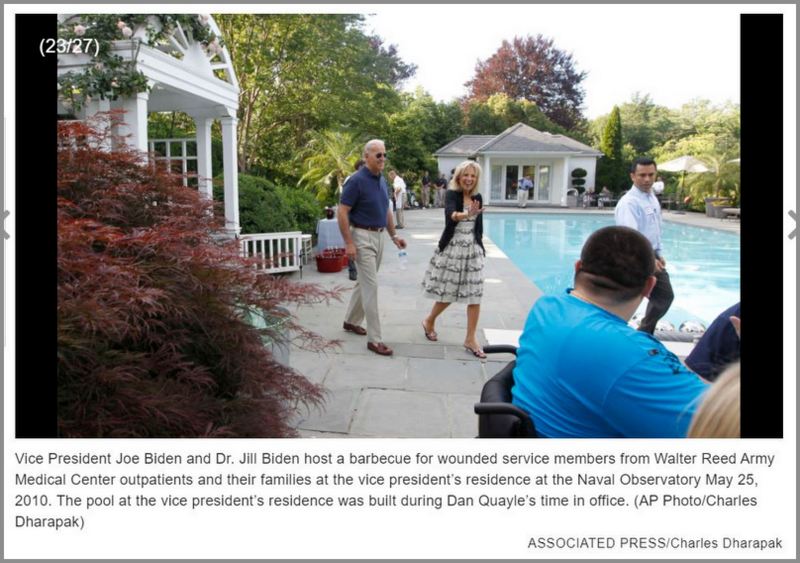 This one shows the Bidens during a party at the official VP home in DC – the Naval Observatory. I’ve never been there and don’t believe it’s ever open to the public. 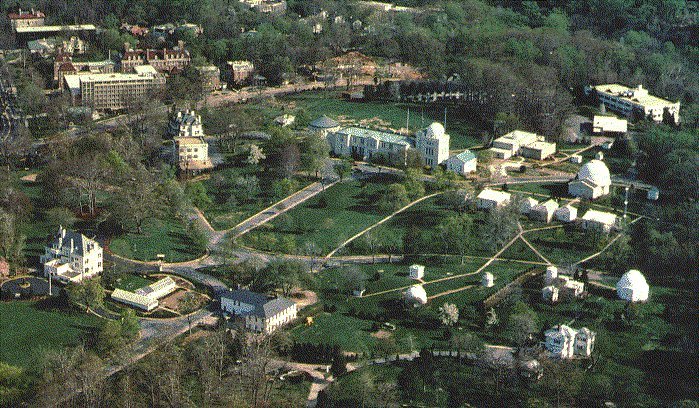 Above, grounds of the Naval Observatory cover about 10 acres. The mansion in the lower left is where Kamala and Doug will be living soon. 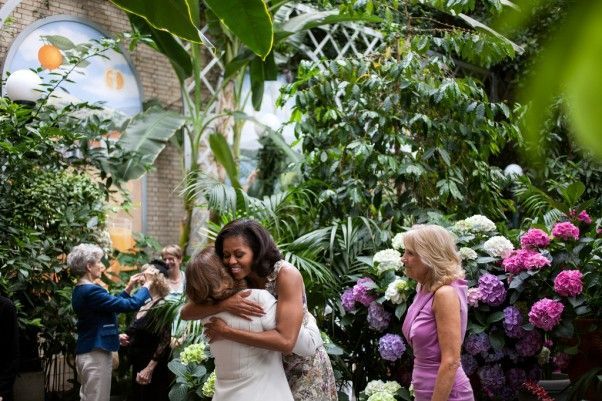 I found one of Dr. Biden with Michelle Obama at the U.S. Botanic Garden. 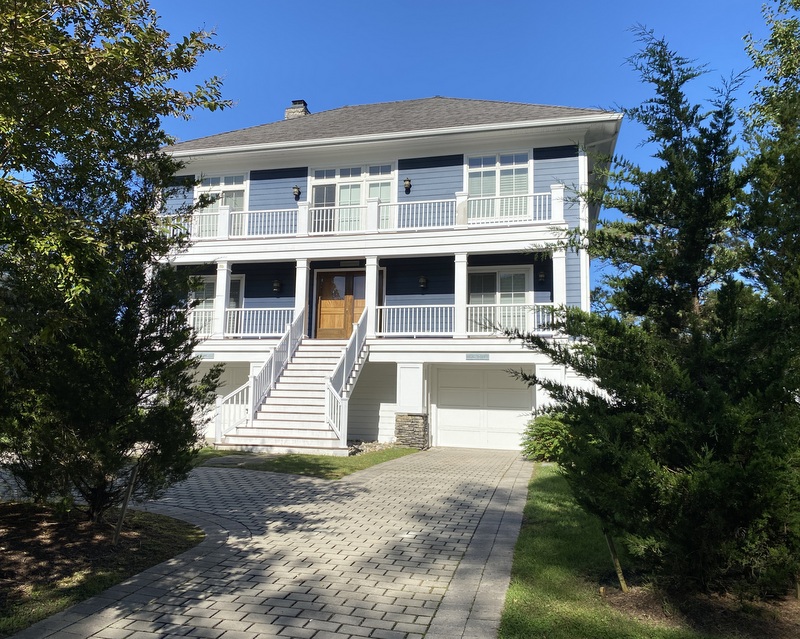 I did a little more research when I visited Rehoboth Beach, Delaware last month and looked for the Bidens’ vacation home there. It was surprisingly easy to find – “Just ask Google!,” a neighbor told me. In anticipation of selling their Wilmington home and moving to the beach full-time in retirement, the Bidens had sold their smaller beach house and upgraded to this 6-bedroom home with an ocean view. (Shown here, with lots of interior photos.) But admittedly, there’s scant evidence here of what might be called gardening.

So maybe she’s not a gardener herself, and I’m guessing that with First Lady duties on top of her teaching schedule, we may not see her harvesting vegetables with middle schoolers. 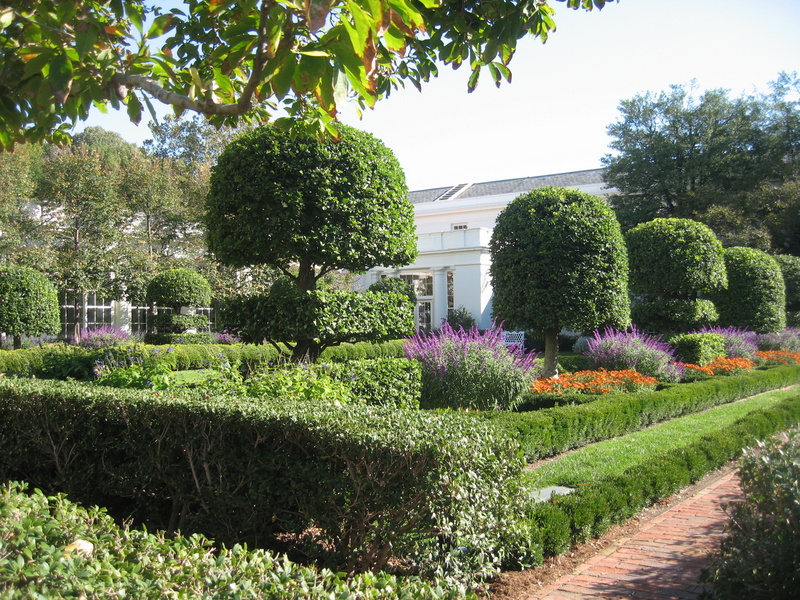 But I’m still hopeful that the new administration will bring changes to the White House gardens and grounds, shown here in my October 2010 post. Maybe she’ll change the Jackie Kennedy Garden seen above; it’s just outside the East Wing where the First Lady’s offices are located.

Time for the White House grounds to green-up?

Big picture, the White House sits on 18 acres, you know, and although Michelle Obama’s kitchen garden was a great addition and essential to her campaign for children’s health, there’s lots more that could be done. 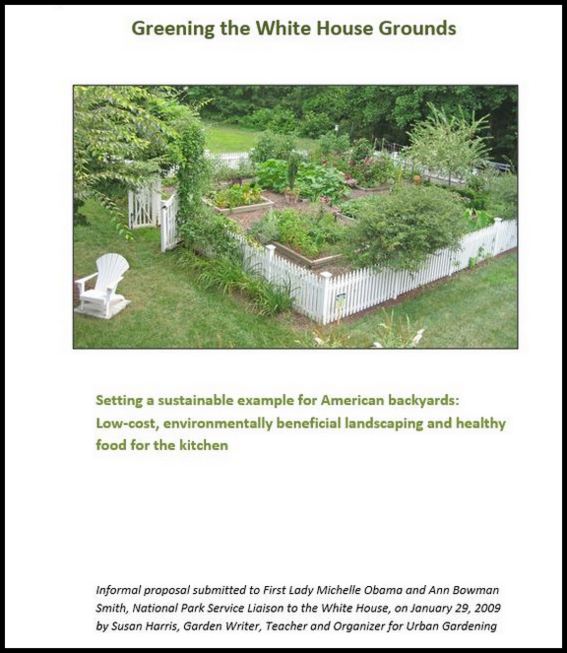 Way back in November of 2008, soon after the election, Michelle Obama’s staff contacted me for advice about a possible White House kitchen garden, which was so thrilling! I know nothing about growing food so I promised to get back to them with an answer. I consulted over 30 local experts and compiled their suggestions in this proposal, which went way beyond what I’d been asked, recommending improvements in lawn care, stormwater management, provisions for wildlife – all facets of sustainable landscaping.

The very disappointing result? I never got a response! I told myself it was because my answers went waaay off-message. I did have some back-channel communications with Sam Kass, their Food Initiative Coordinator, and was at least able to connect him with some local food-growing and school-garden people. But my dreams of becoming new-best-friends with Michelle herself were dashed, as well as the more modest dream of being invited to the press event for the new food garden.

This time, I’m not expecting to be contacted but I’ll do my best to get that proposal seen again. And I’ll definitely be there for the spring 2021 White House Garden and Grounds Tour, after which I’ll respond to the Rant commenters demanding that I condemn the recent changes to the Rose Garden. Any real gardener knows not to judge a redesign immediately after installation – in August, no less, and after its abuse during the convention.