Almost no traffic on Pennsylvania Avenue.

I hadn’t been downtown DC since last year, so with glorious September weather upon us, I was determined to go. But I’m not using public transportation unless I absolutely have to, so taking the usual subway right is not an option – until further notice.

Then a friend who’d driven downtown for a BLM rally told me how easy it is to pay and reserve a parking spot. Driving is actually faster from my house – just under 30 minutes, off-rush, which barely exists anyway. One problem solved. And there are now some accessible rest rooms in the area – a big concern for many, including me.

If you happen to be local or visiting, check out my other version of this post with visitor details, like how to reserve parking and where those critical rest rooms are. Most of the museums have opened up – with timed reservations – but I’m sticking with the abundant outdoor attractions for now because they’re safer and I want to take advantage of this weather! 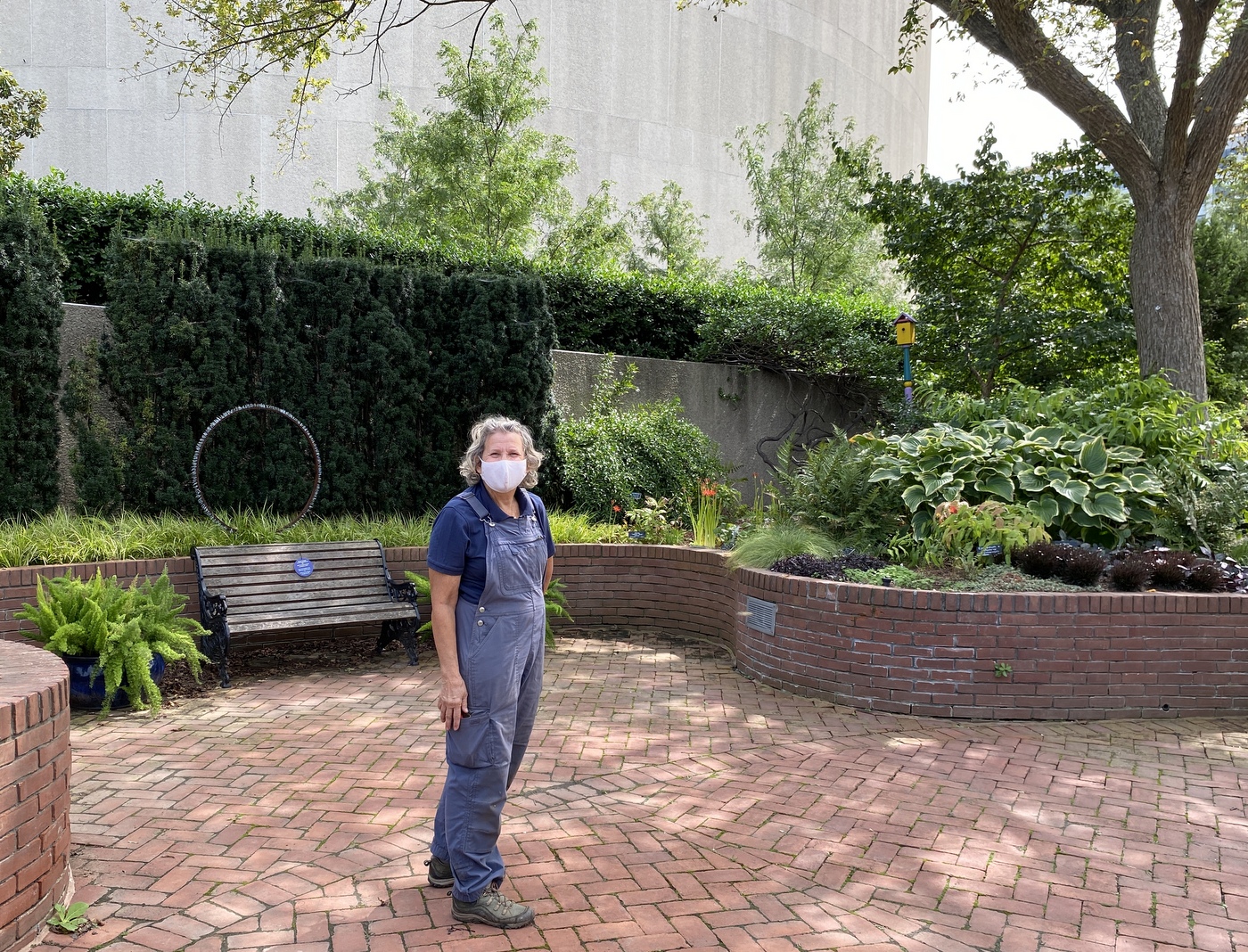 Janet Draper at work in the Smithsonian’s Ripley Garden

On my first trip downtown I was lucky to run into Janet Draper tending her Ripley Garden next to the Smithsonian Castle. You may have heard of Janet. She’s a real force in the hort world, especially as leaer of the Perennial Plant Association. That’s the go-to group of gardening professionals – also the fun people you want to hang out with.

So Janet, what’s it like working in a Smithsonian garden these days? She responded that “strange” is word of the year. While normally there would be “chaotic bus loads of tour groups,” this year there are very few visitors. She found it eerie at first but has gotten used to it. “It’s going to be hard when masses are back!”

This year it’s been mainly locals who’ve been “exploring their own back yards,” some mentioning to her that “they would never venture to the National Mall during ‘normal’ times due to traffic/ crowds and no time. So it’s a silver lining for them.”

There’s been a silver lining for the garden, too. “Currently I’ve taken the opportunity to gut and overhaul areas I would never dare to when crowds are present.” 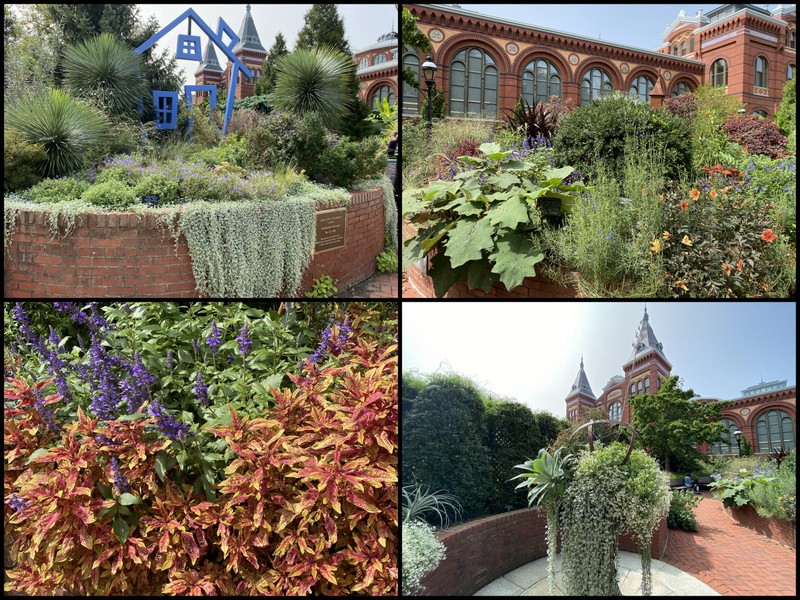 In the beginning, she and the other Smithsonian gardeners were “told to stay away from the garden – during spring! – and that was really, really hard.”

Thankfully, at least some watering was being done, but if that’s all the care her garden was getting, she could well imagine the weeds she’d be dealing with later on, and she wasn’t letting that happen.

“Isn’t it awesome that I love my job so much I would do some ‘covert’ gardening?!” Of course she did! who among us would be able to stay away?

Oh, and no volunteer gardeners have been allowed this year, which is a big loss for the gardens.

Janet added by email that “I’m so fortunate to work for Smithsonian. Our Secretary (Lonnie Bunch) has been amazing and has kept us all safe and informed of what is happening. He’s made it clear that the employees at Smithsonian are just as important as the artifacts.” 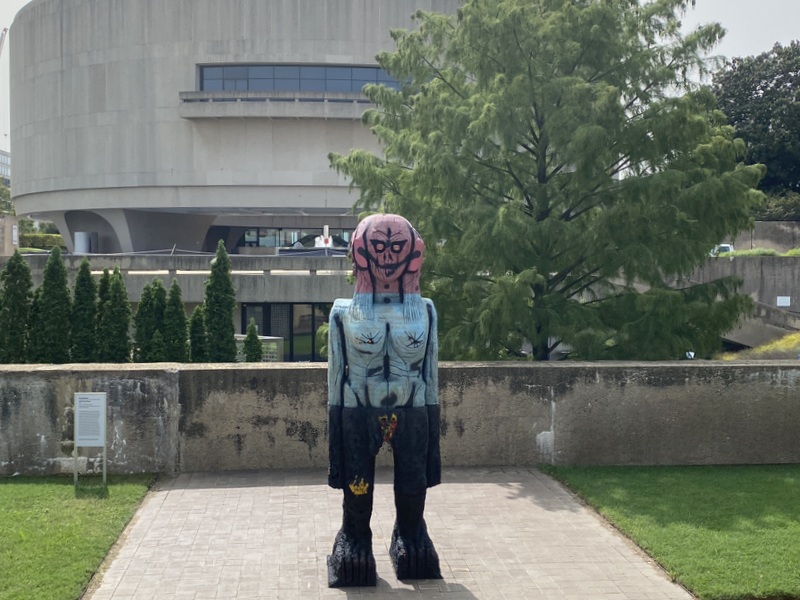 Another Smithsonian Garden I visited is the Hirshhorn Museum’s Sculpture Garden, which recently unveiled “We Come in Peace,” above. I like it but can’t explain why.

I was sorry to see that my favorite sculpture there – Miro’s “Lunar Bird” in a sea of Stipa grasses – is gone, and its replacement now sits on a bed of turfgrass. Oh, well! 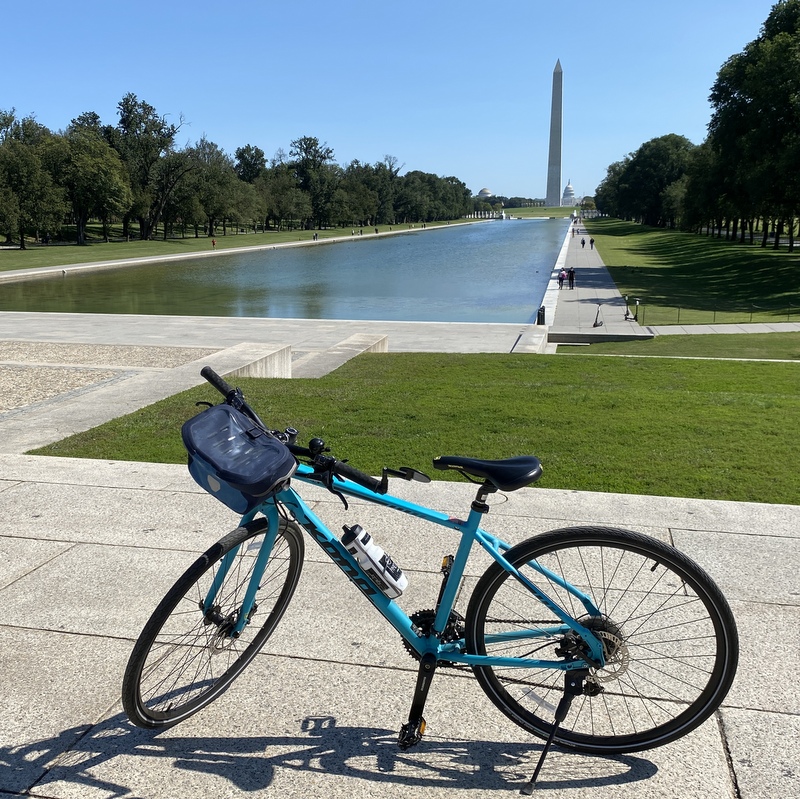 I made a second trip down to the Mall this week, taking my bike this time and seeing SO much more. It’s never been easier to ride around this city – now relatively car-free and totally crowd-free.

I wanted to see the Eisenhower Memorial that opened last Friday, having followed it over the 20 years of its design and approval process. It covers 3 whole acres of prime real estate facing the Air and Space Museum along Independence Avenue. 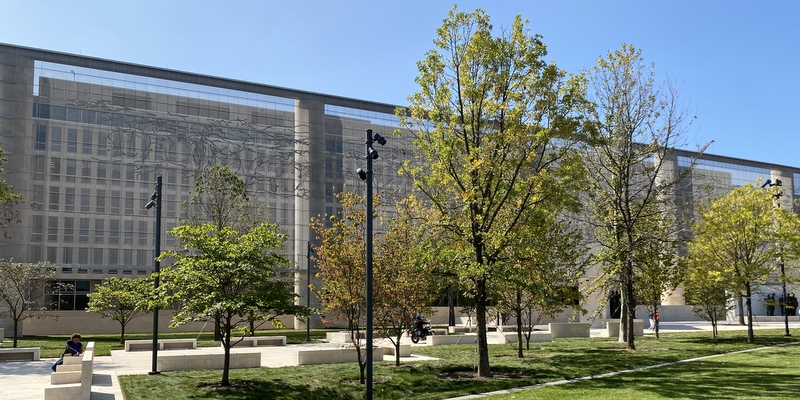 Now we all know not to judge brand-new landscapes on their opening day appearance, or to at least put on our future eyes before making any pronouncements. In this case starchitect Frank Gehry designed this entire space, including its landscape, dominated by rows of trees along open turf panels that allow for an unobstructed view of the Capitol. So let’s imagine it years from now providing shade and other urban canopy benefits.

The largest feature in the memorial is a humongous scrim attached to giant pillars, visible here behind the trees but seen much better in this night photo. (And night is when the  Washington Post’s critic recommends seeing it.) The scrim features a drawing of the cliffs over Normandy Beach but in the daytime it resembles nothing. That’s too bad because the original design used a photo of the cliffs, rather than a drawing, and they were recognizable even in daylight.

Eisenhower as a farm boy, and a general.

This memorial took forever to be agreed on and the greatest disagreement between Gehry and the Eisenhower family was over his focus on Eisenhower’s youth, portraying him solely as a Kansas farm boy.  I’m glad the family demanded his presidency and military career be portrayed, as well. D’oh! 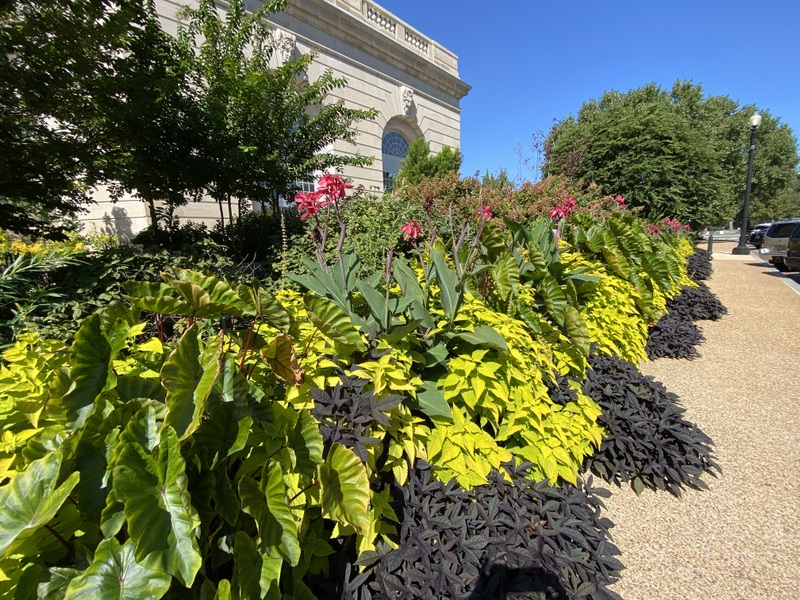 Cycling on down the Mall, I stopped at the USBG and was surprised to find even its outdoor gardens mostly still closed. At least this streetside view of the conservatory here is glorious.

The USBG’s renovated Bartholdi Park across the street IS open and looking filled in after its renovation four years ago. Sorry I neglected to get a photo, so here’s a couple from their Facebook page.

I love this garden. I used to have lunch in it whenever I was working in the Rayburn House Office Building across the street. I needed the garden to mellow me out from what I saw happening indoors. 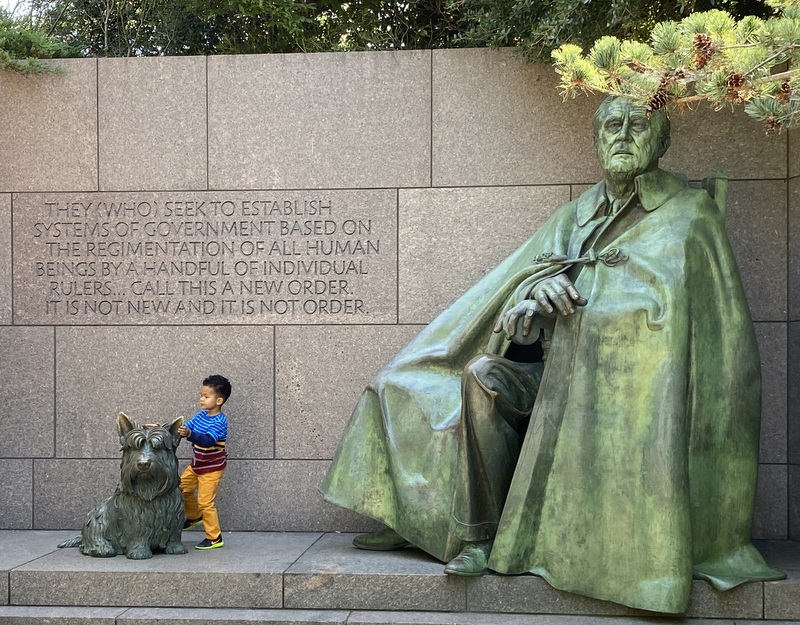 With my speedy bike I cruised down to the more distant memorials, including the FDR. This particular sculpture of the president caused a stir because it hides his disability but I still love it, and the statue of Fala is beloved by kids. (A second statue of FDR in a replica of his homemade wheelchair was added later.)

Now seeing the photo, I read the quote and wonder what in particular he meant by the “regimentation of all human beings.” The memorial is packed with great FDR quotes, many of which are as relevant as ever – or even more so now.