Louisville’s Big Rock in Cherokee Park – So What if it’s Not the Biggest Rock in the World? 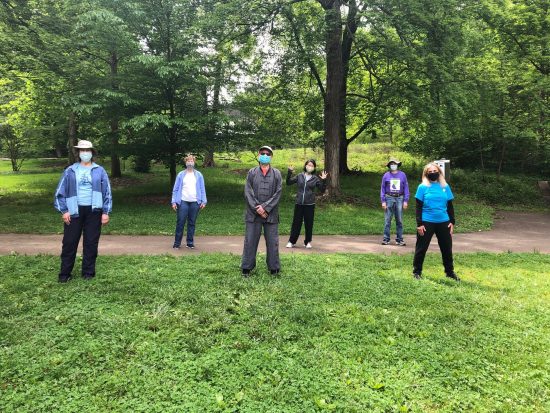 I have spent nearly 20 years at the Big Rock corner of Louisville’s Cherokee Park. I meet here regularly with my Big Rock Tai Chi Club to practice Yang Family-Style Tai Chi. Big Rock is not our exclusive Shangri-La, as it is open to families, picnickers, plein air painters, guitar pickers, skulking teenagers, nature lovers and us. 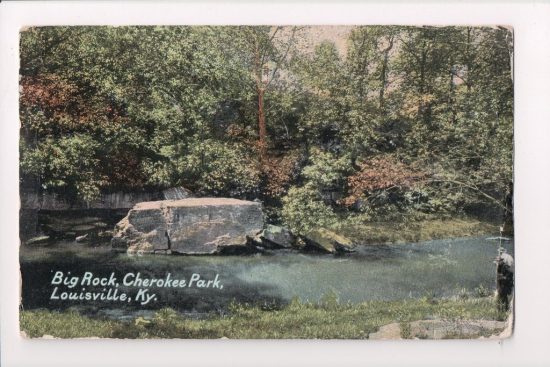 The Big Rockers (my tai chi group) has grown smaller in the last few years, but our energy (chi) is undiminished. Nine or fewer of us meet now with Yong You, our friend and teacher. 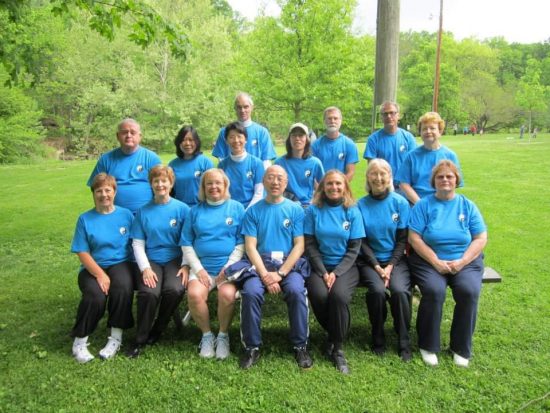 Here at Big Rock, I have made close friends, improved my health and found a deep sense of belonging.

Lloyd Kelly, a member of our group, demonstrates the 16-posture Tai Chi form, next to a twisting white mulberry, along the banks of Beargrass Creek.

People who truly inhabit a place are culturally adapted to that particular region or ecosystem. They know the plants, animals, weather, waters, soils—and draw their identity, lifeways and material culture—individual and collective—from that place.

Big Rock, along the middle fork of Beargrass Creek, at the eastern fringe of the Olmsted-designed Cherokee Park, connects Louisvilleans to nature and to one another.

Our group sways in a choreography of slow, elegant moves with magical names like Brush Knee Push, Part the Wild Horse’s Mane and Repulse the Monkey. Bicyclists, joggers, parks employees, moms, dads and little kids stare at us curiously. Big Rock is full of eye-openers.

The geologic underpinnings of Big Rock began in the Silurian period. Thick slabs of Louisville limestone and Waldron shale were laid down 400 million years ago. John James Audubon admired Beargrass Creek; Shawnees depended on it. 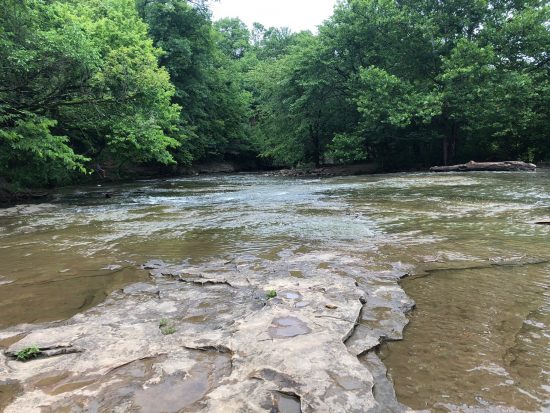 Frederick Law Olmsted was hired to design and build a series of parks and parkways in Louisville, including Cherokee Park and Big Rock in the late 19th century. ”I never saw a park in my life which has as many natural advantages as the property just purchased,” Olmsted wrote in 1891. 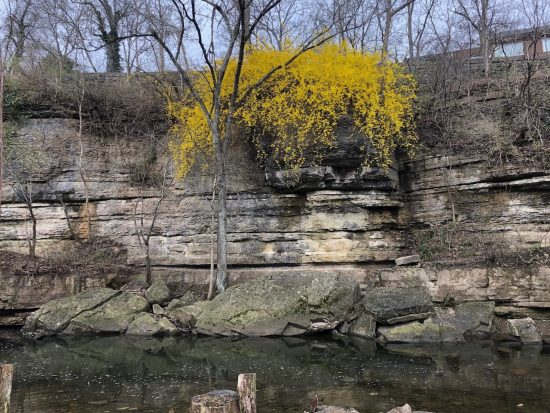 Walk the well-traveled trail, adjacent to the pavilion, and you’ll find the Big Rock that was dislodged from the steep cliff long before anyone was taking notes. It is nowhere close in size to massive boulders, two-stories high, on Yunnan’s Jinsha River near Tiger Leaping Gorge, but this is our little Beargrass Big Rock. 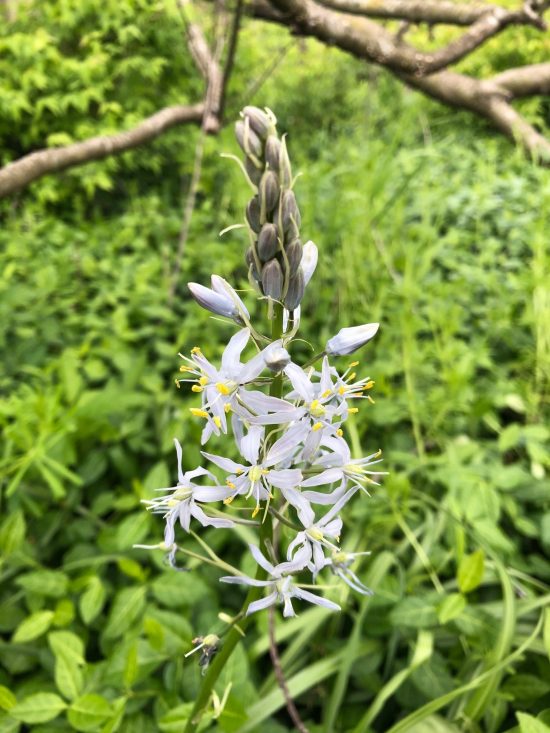 Botanist Julian Campbell unraveled the origins of the name beargrass in a fascinating story called Beargrass in the Bluegrass: Rediscovery of Ecological Meaning for Wild Hyacinth (Camassia scilloides):

“Until now, the origin of the name of Beargrass Creek in has been mysterious. The first written record was as ‘Rotten Cr. Or Bear Grass C.’ on Lewis Evans map of 1755. There is no evidence that ‘beargrass’ was a corruption of the French ‘La Barre Grosse Crique’ for ‘The Big Bar Creek,’ which has been suggested since the creek’s mouth is just above the Falls of the Ohio River. Instead, Otto Rothert theorized in1927 that the name was based on the plant Yucca filamentosa, often known as beargrass, which he stated was plentiful in the Virginia colonies. However, there is no botanical evidence that Yucca is native to Kentucky…During the 18th century, ‘beargrass’ throughout the central Ohio Valley was probably Camassia scilloides, eaten by bears and humans alike. “

Yucca filamentosa and the southern Appalachian Xerophyllum asphodeloides (beartongue) were less edible or even toxic, according to Campbell. 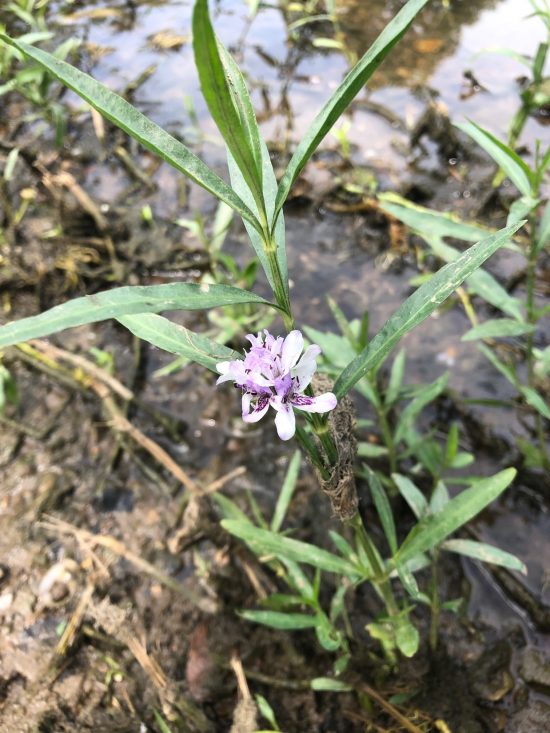 The botanist Pat Haragan, who is a collaborator with Julian Campbell, met me near Big Rock a few weeks ago. Pat is the author of The Olmsted Parks of Louisville: A Botanical Field Guide and Weeds of Kentucky and Adjacent States. She has a sharp eye and notices plants I easily overlook. I can spot cigar trees, elderberries, common milkweed and even an occasional devil’s-dipstick mushroom, but she sees so much more on a short walk that I have either ignored or not seen. 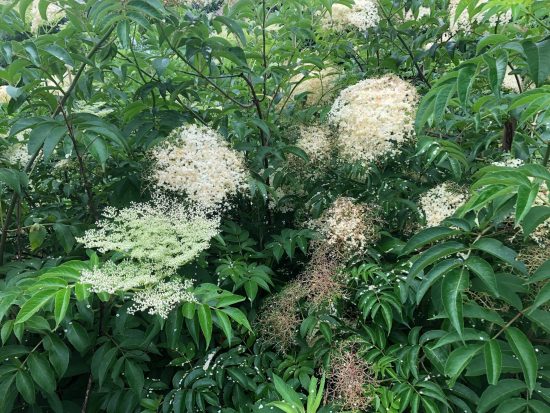 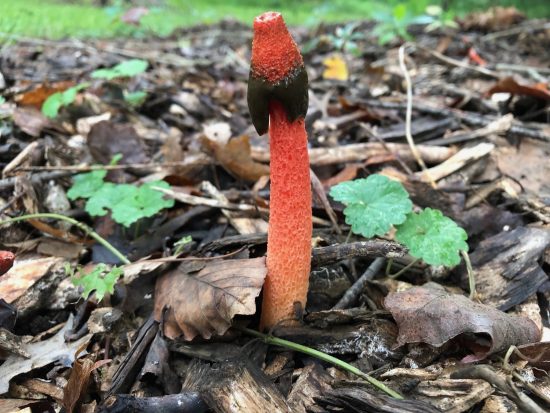 Pat tells me about the herbaceous water willows (Justicia americana) and points to bottle brush grass (Elymus hystrix), and the diminutive and indestructible path rush (Juncus tenuis). She knows where there is a Cherokee Park hillside, nearby, carpeted with spring-flowering beargrass (Camassia scilloides).

Note to Allen: Keep your eyes peeled next spring.

There have been mornings when my conscience nags at me to tend the garden instead of practicing tai chi at Big Rock. The garden needs perpetual care, but I have habitually slowed down, in order to be with friends and enjoy the natural beauty at Big Rock for a little while. I quiet my mind, move slowly and try to avert sideways glances to see what other park visitors are doing. 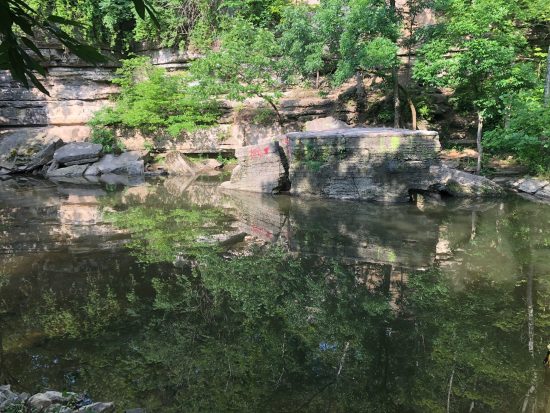 Tai chi works wonders. On the drive home, with my body and soul soothed, and cocktail hour in the offing, I am startled when I look into the rear-view mirror and find four cars stacked up behind me. I am going 15 mph. I hit the gas and zoom on.