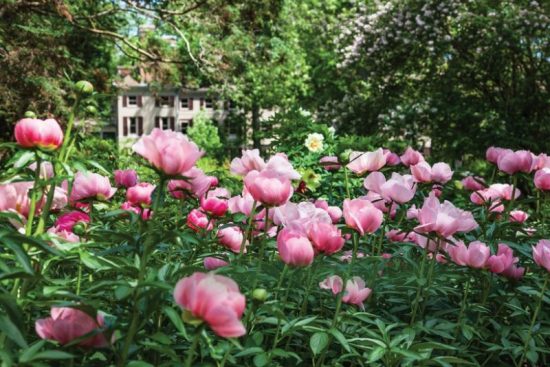 In this burdened, budding springtime, we are all looking for something to do. I suggest falling in love — rollicking, floating on a marshmallow cloud, I’m-not-even-hungry love.

To be honest, my paramour and I have been carrying on since 2016 and this year we are as star-crossed as any two have ever been. Confession: I’m married. But the real problem is my heart’s desire lives behind the gates of an Eden-like public garden called Winterthur. The place draws a crowd, so the pandemic forced it shut for all of April and May. No visitors allowed.

Among the lush woodlands and rolling meadows of Delaware’s Winterthur, something is always in bloom. In May, it was my Paeonia and I was sick with longing. I imagined barreling through the single orange cone ahead of the guard shack. Or maybe I’d drop in, like a botanical paratrooper, surgically landing between the upper and lower jardins des pivoines. Could I pilot a drone over the walls of this former du Pont estate for just a glimpse?

Reader, my love is a peony.

Oh, I wish at least I knew its name! But I’ve come to find that identifying a singular peony is like trying to track down Cinderella after she fled the ball single-shoed. The registry maintained by the American Peony Society lists a cast of thousands – from “A La Mode” to “Zori” and many doozies in between: 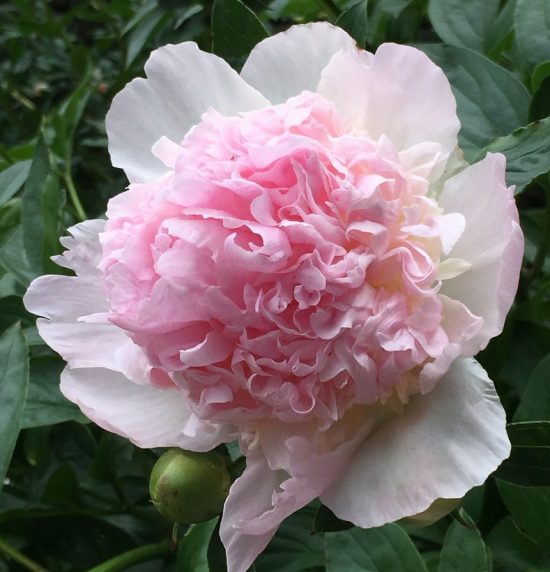 I could love any one of these monikers were it attached to the achingly pale pink peony of my heart’s desire. I’ve scanned dozens of photos and, to my eye, it’s close to a Shirley Temple, a bit like Angel’s Cheeks, in the neighborhood of Sarah Bernhardt, but with more of a snowball confection at its center. Ensconced among hundreds of other peonies at Winterthur, this flower shimmered and vibrated before me like Daisy to Gatsby on a steamy Louisville afternoon. As Fitzgerald wrote, “She blossomed for him like a flower.” Sigh. Same.

In early May, with no indication when Winterthur would re-open, I suppose I could have tilted my petal-wilting passion toward my husband. But wow, no thank you. We’ve been penned up together since March and his name is merely Dave.

Time was running out for me and my mystery flower. Peonies bloom gloriously, glamorously and oh-so briefly. Within days, these ruffled beauties, these hundred-petal bombs, wilt and flop over like debutantes after a boozy party. They swiftly mature into leathery seed pods and the year-long wait begins again.

Before you suggest I grow my own peony, do you know that peonies must be planted in the fall and are often without blooms for the first two or three years? Hence the peony grower’s adage “We sleep the first year, we creep the second and we leap the third.”

I can’t wait three years and, anyway, the flower I long for is no garden center special from Lowe’s. The Winterthur peonies — many planted in the 1950s and 1960s — carry a pedigree. This echelon of peonies announce their weddings in the New York Times. They bloom on the grounds of this Delaware chateau because they were chosen by Henry Francis du Pont, born in 1888 and heir to the industrialist family.

Mr. du Pont eventually turned over Winterthur’s immense, naturalistic garden — and his 175-room home — as a public space and museum. Connoisseurs of gardens flock there to ride open-air trams that survey its vistas. If you need more convincing, I crossed paths with Diane Keaton there last April and the U.S. Postal Service just emblazoned Winterthur on a garden series of Forever stamps. I have the stamps — would that I could send a letter to my cherished peony! I would scent it with perfume and close with a line from a Mary Oliver poem: “This morning the green fists of the peonies are getting ready to break my heart.”

Like a lightning-bolt love affair, the visible life cycle of a peony is astonishingly brief. Winterthur cuts back its peonies so that when I visited on March 13, the gardens were mostly just a flat expanse of soil with a few tiny shoots breaking through at ground level. A close inspection of the spot where my treasured peony blooms revealed only a hollow, woody reed barely poking up through the mulch.

A lot happens in a few weeks. With velocity, peonies go straight vertical in the early spring. Then, atop the stem, two leaves extend themselves as open-armed as a ballerina in second position. Those graceful arms, that sturdy stem, will soon hold aloft an improbably large peony bud, like Atlas shouldering the heavens. The buds emerge closed tight and often the color of cherry cola, sticky with nectar, pure ambrosia for ants. Peony buds then metamorphize into a firm packet of petals known as the “marshmallow” stage. It’s all I can do not to pop one into my mouth.

That is slightly less crazy than it sounds because peonies are used in salads and jams. But please don’t eat the peonies! That would rob you of what happens next. Finally released from its leafy cocoon, the marshmallow bud yawns open and the peony spirals wide into full flower. Nothing to see here but the annual miracle. Swoon. Two million #peonies photos on Instagram prove I’m not alone. 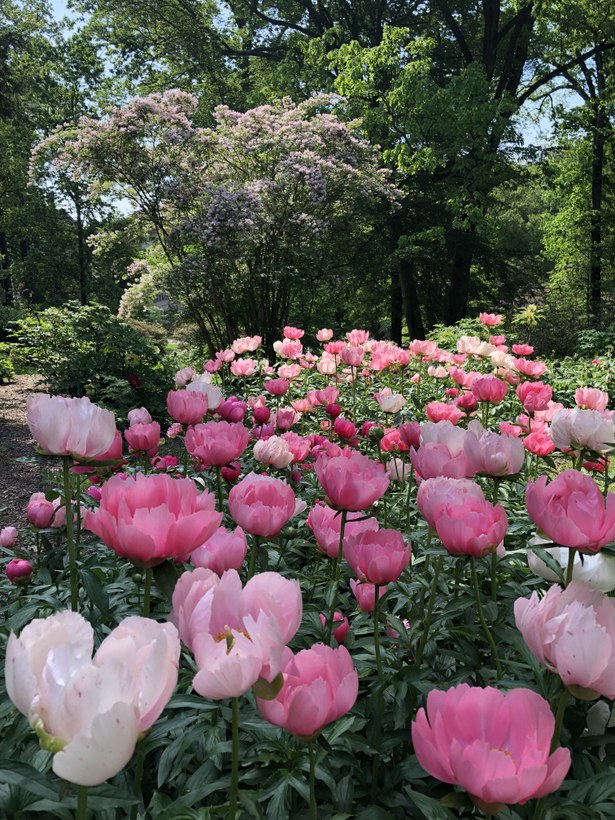 By mid-May I knew I was running out of options. My peony would soon bloom without me. Delaware’s quarantine rules were relaxing at the beach and the boardwalk, but no word on the gardens. I tried giving other peonies a whirl and even sauntered by a neighbor’s yard to visit their quite nice Festiva Maxima. I dropped in on a tumbledown estate called Gibraltar where some charming peonies ring an Italianate garden. But it turns out I don’t have the kind of heart that can accommodate a side peony. Like real love, my floral ardor is painfully specific.

Fortunately, the heartsick writer always has one trick up her sleeve. She can find out a lot, even during a pandemic, under the premise of “research.” I contacted Winterthur, whose staff confirmed the peonies were all well and had been champs even through a cold snap. Cards on the table, I told the director of horticulture I wanted to know everything about the peonies at Winterthur.

This returned to me the wincing memory of how I once wanted to know everything about a cad (not Dave) who I loved during freshman year. I had even wondered: What kind of toothpaste does this magnificent creature use? Without getting into the details, let’s just say my peony has already been far more loyal and worthy of my sincere interest than the unmagnificent gent from Kappa Sigma.

The staff at Winterthur answered my inquiry by graciously opening their digital archives and sending me the kind of source matter that makes the heart pound. Though I wasn’t able to divine my peony’s name, I did learn a lot more about how the Winterthur peony gardens came to be.

The peony garden almost wasn’t: Du Pont initially planned to grow irises, but the archives hint at some sort of flapdoodle with the Iris Society, which visited in 1937. The visitors shared iced tea and cookies, the records show, but perhaps not du Pont’s inclination to plant his garden strictly “from the point of view of color.”

Du Pont collaborated with two talented women on the gardens: Landscape architect Marian Coffin and Silvia Saunders, daughter of the most well known peony hybridizer in the world, Arthur Percy Saunders.  Professor Saunders crossed variety after variety and du Pont is credited with having the foresight to acquire many of his cultivars, which he grew in upstate New York.

Du Pont wrote to Saunders, a year before the professor died: “I expect to have a yearly thrill during the remainder of my life from the Saunders garden.” 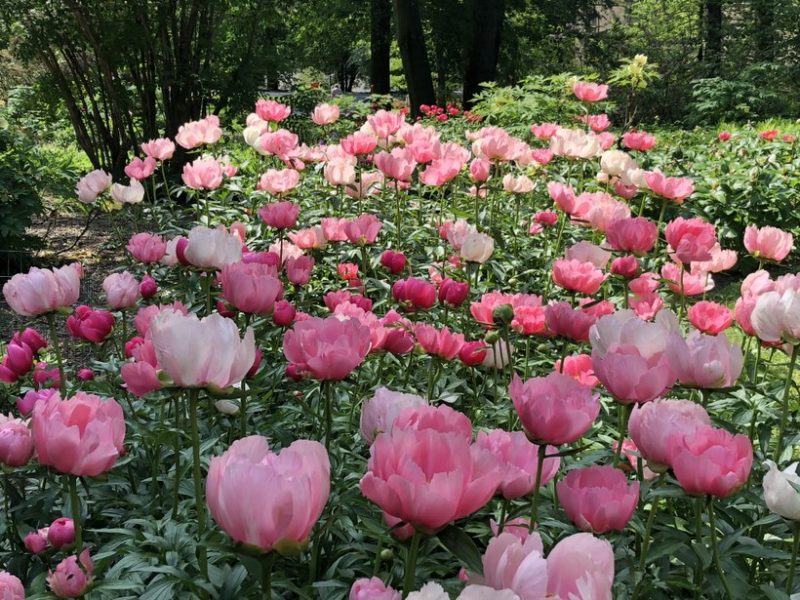 That time the Winterthur peonies traveled to London: Du Pont encouraged Silvia Saunders to travel to the 1962 Chelsea Flower Show with 300 Winterthur peonies. There, before a silver coromandel screen, and assisted by two famous British horticulturalists, she displayed the well-traveled beauties. The Winterthur blooms garnered five awards including the Lindley Silver Medal. Du Pont, who was among the judges that year, left Silvia Saunders a note on the peony table that read, “Good work, lass!”

It must have been a glorious, celebratory moment, but I like to rewind the tape to six days earlier, when the buds had to be collected in Delaware for the trans-Atlantic trip ahead. I’ve heard tell that they picked the peonies in the rain holding umbrellas over the buds to protect them. Is this not like every romantic movie ever made? And I wonder if my pink peony was in that winning bunch. I feel certain, yes.

How good it feels to be part of an audience that heaps public praise and recognition on those we love and who most surely deserve it. But this year, the Chelsea Flower Show “went digital” just like my son’s college graduation. The staff at Winterthur did all they could for me. They shared photos and videos of the blooming garden on social media That, plus all the archival information, soothed me, but in the partial way of a Zoom call for a momentous occasion.

We had such a call with my graduating son and it was something. But I wanted all 360 degrees, full immersion for my senses. At this moment in our sad year, one feels compelled to say these little griefs — over missed peonies and commencement exercises — are not such a big deal. But they’re not nothing.

Perhaps my joy will double when my son’s postponed graduation celebration finally happens. And I’m sure my heart will swell next May, when the peonies, those “silent, numb nudgers,” emerge from the cold soil to give us all the yearly thrill. Maybe I’ll bring Dave.

Until then, something is always abloom at Winterthur, whose gardens, I’m thrilled to say, have reopened. Summer is just getting started. We can still have purple rhododendron, blue hydrangea and orange day lillies — flowers for when the day is new. I’ll be looking at those blooms, but peony, I’ll be seeing you. 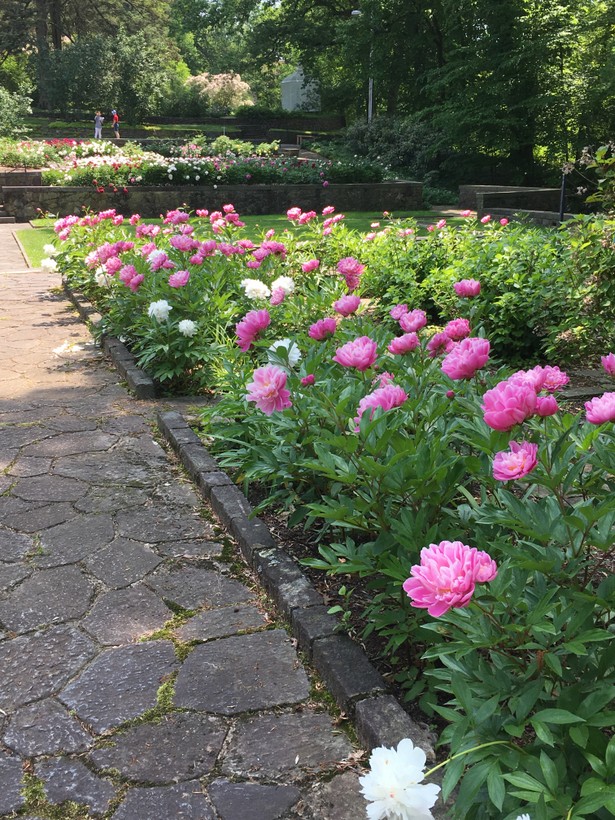 Debra Moffitt is a Delaware writer and author of a middle grade book series with St. Martin’s Press. Her essays have been published in Slate, the Miami Herald and the Washington Post. Photos courtesy of the author and Winterthur.
By GardenRant Guest|2021-02-10T11:23:36-05:00June 9, 2020|8 Comments