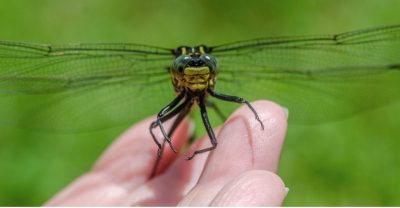 In recent years I’ve learned to re-define “garden wildlife” to include not only butterflies and bees, but also the host of other pollinating insects.  Recently, Christine Cook of Mossaics Ecological Landscape Design took me a step further.  She introduced me to dragonfly gardening. 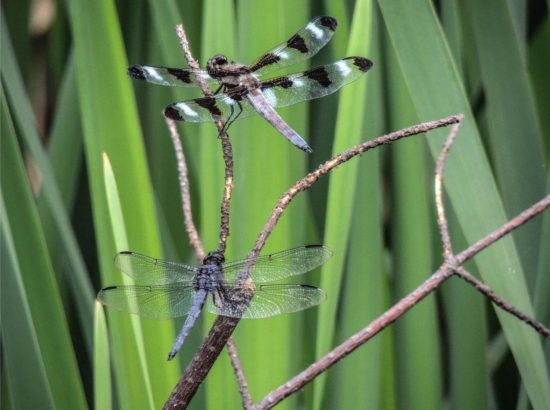 Christine has been admiring and studying these intriguing insects ever since they would come and roost beside her when she was a girl working in her grandmother’s garden.  She was fascinated then by dragonflies’ brilliant colors, and their prehistoric appearance.  She’d watch as one of these creatures soared into flight and then returned to its perch to devour some flying insect it had seized – dragonflies, Christine told me, particularly favor mosquitoes, eating as many as 100 per day.   That alone would make them worth cultivating, in my opinion, especially as, according to Christine, attracting them to the garden is relatively easy.

The principal requirement is a pond, even a small one assembled from a kit purchased at a garden center or on-line.  Install this, and before filling it with water, line the bottom with separate zones of sand, mud, and gravel: this diversity of habitats will support the greatest range of immature dragonflies, or nymphs, which may inhabit the pond for just a couple of months or up to 12 years before emerging and flying off as adults.  Provide floating aquatic plants such as the native waterlily (Nymphaea odorata) and emergent ones such as pickerel weed (Pontederia cordata) and broadleaved arrowhead (Sagitaria latifolia).  These plants furnish opportunities for dragonflies to lay their eggs, and the plants’ sub-surface parts create havens for the dragonfly larvae.  Later the larvae may crawl up the leaves and stalks when they are ready to emerge as adults.

Encircle the pond, Christine advises, with large rocks that furnish roosting spots,  and a shallow ditch planted with moisture-loving species such as sedges and rushes, as some dragonflies prefer that habitat. 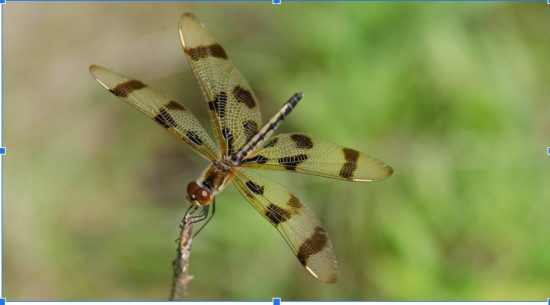 If you furnish these things, Christine affirms, your garden will soon be popular with dragonflies.  Which can spark a major spectacle: I remember one afternoon when the parking area at the edge of my yard became the locus for a kind of behavior Christine defined as “hill-topping,” a preparation for migrating to warmer climes in late summer or early fall.  Hundreds of dragonflies gathered to fill the air with flashing colors and glittering wings; I never seen a more fascinating display.

If you want to find out more about dragonfly gardening, you can listen to a free podcast I’ve posted of a conversation with Christine Cook at thomaschristophergardens.com/podcast.