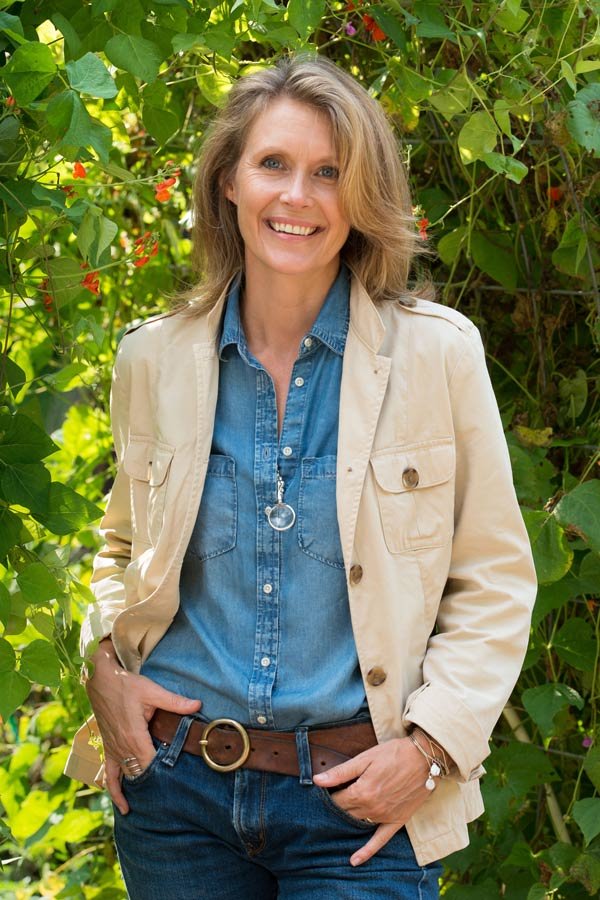 “There are peaches to be eaten warm from the brick of the wall they are grown against, peas picked off the tendrily plant and shucked straight from pod to mouth…tomatoes waiting to release their own musty muskiness as teeth break their skin.”

This, I was informed by my friend Marianne Willburn in her brutal rebuttal to my good-natured, innocent, lighthearted, little column, Time for a Grexit, (published in the July/August issue of Horticulture Magazine)[i], is the high prose of English garden writer, Monty Don. It is her first of many examples of English garden writing superiority over that roughshod American lot. A citation so lovely, she more or less admits, that it compels her (and, apparently, a clique of Facebook Friends and other supporters) to sigh, swoon, and otherwise behave in a manner that works best in a room in a house down a long lane that offers plenty of privacy. Despite trying hard not to “go there,” given this reaction to “peas shucked straight from pod to mouth,” I couldn’t help but wonder how over the top her pleasure would be if Mr. Monty Don were to, oh I don’t know, perhaps eat an apple on the other end of a telephone call? Assuming, of course, that the call came from England. Conceivably from the Walled Garden at Wisely. Monty Don wearing wellies. Monty Don perhaps wearing only wellies.[ii] Eating an apple. Again, trying hard not to “go there” mainly because it might be a sin, but I can’t help but imagine something along the lines of Jamie Lee Curtis responding to John Cleese barking Russian at her in A Fish Called Wanda. 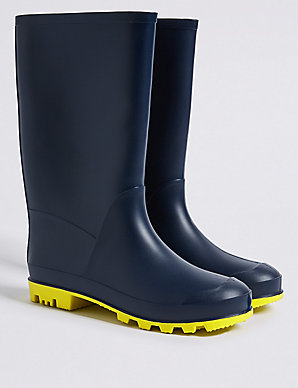 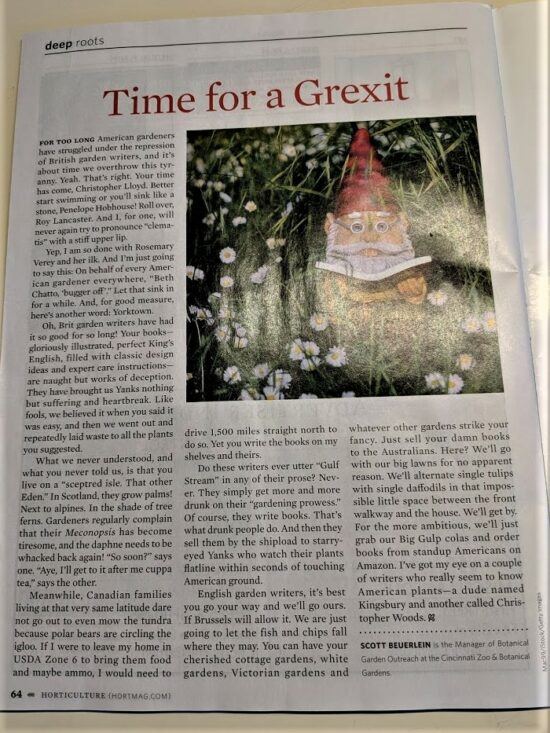 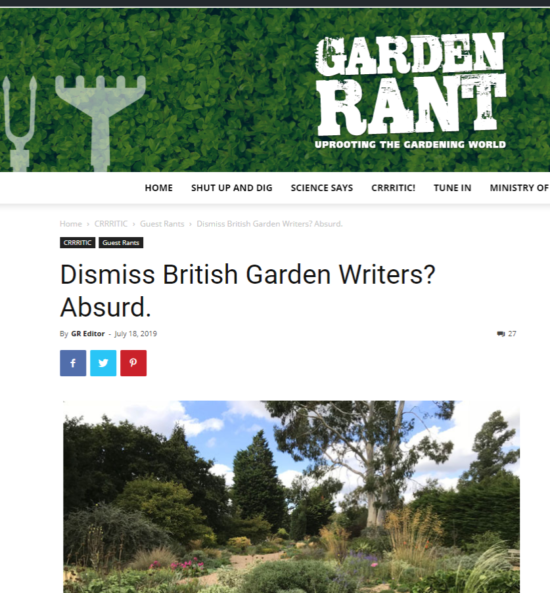 The rebuttal that broke me. https://www.google.com/search?q=the+gulf+stream&source=lnms&tbm=isch&sa=X&ved=0ahUKEwil7p2q9IDkAhUbCM0KHUj3CYQQ_AUIESgB&biw=1006&bih=563#imgrc=zk5ACnjGVOKjYM:

I must admit I was rocked by Marianne’s withering rebuttal, Dismiss British Garden Writers? Absurd. (Guest Rant, July 18, 2019, https://www.gardenrant.com/2019/07/dismiss-british-garden-writers-absurd.html). Came out of nowhere, appearing, even, right here on Garden Rant, my home turf. For I, too, had enjoyed our visits, including a lovely dinner (thankfully one without peaches or peas), and delighted in good-natured repartee at a speaking engagement. But her piece landed some pretty heavy punches and, sadly, derailed whatever confidence and momentum I had managed to patch together since being bullied in my childhood. Oh, and after the loss of our beloved little black dog, Basil.[iii] Oh, and since surviving cancer.[iv] 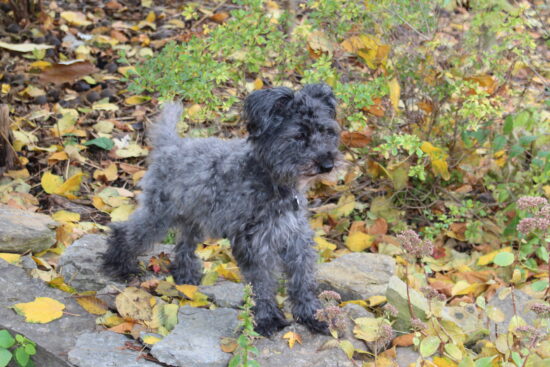 I suppose, as my therapist pointed out, I should take some solace in the fact that my 500 word column inspired such a heartfelt, well-documented,[v] erudite (“Lloyd was as caustic and clever as Dorothy Parker, but as loveable as Ogden Nash.”), revealing (“When he starts undressing figs with his fingers, I need a moment to compose myself.”), occasionally pretentious (“went to university there”) sometimes profane (“he has his head right up his smart ass”), opportunistic (stealthily inserted plug for her British garden tour business), and masterfully scathing 5000 word screed.

Frankly, dammit, I’ve been outclassed. Forced to admit I’ve never heard of Ogden Nash. Nor Monty Don. Whatever I thought I had become, I was again reminded that I’m just another troglodyte American from the hinterlands, bumbling along, thinking most of the time only about my next Big Gulp. Worse, post-rebuttal, I’m too afraid to even Google “Monty Don.” From Marianne’s drooling description, I fear one mistaken click and, damn, I’ve downloaded one of those nasty Ukrainian viruses again. Or, even worse, my dear wife, Michele, will see “Monty Don” in my search history, click out of curiosity, and scarper off on the first aeroplane to London. You see, like Marianne, she too is an Anglophile. Always watching English dramas, documentaries on the Queen’s corgis, and other crap like that, and, therefore, vulnerable to suave, sophisticated, Monty Don-like, Englishmen. 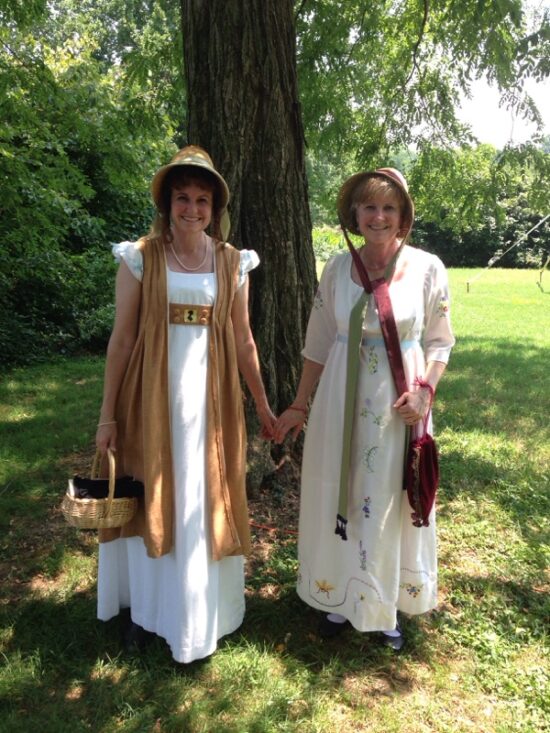 My Anglophile Wife, Michele (right) and her twin sinister, Kathy, at a Jane Austen festival. All dressed up and ready to be married off (to men of good fortune).

But I have heard of Christopher Lloyd. In fact, I’ve got a few of his books. But somehow in the busy life I live, I managed to miss this brilliant bit of prose, gleefully quoted by Marianne, in which Lloyd calls out snobs:

“There are some gardeners in whose company I feel vulgar. They will expect you to fall on your knees with a magnifying glass to worship before the shrine of a spikelet of tiny green flowers… yet will themselves turn away disgusted from a huge, opulent quilt of hortensia hydrangeas.” 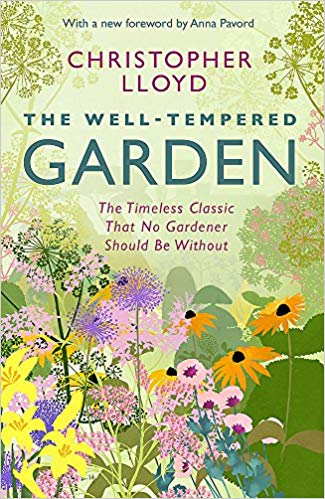 Huh. Interesting. So Christopher Lloyd was no fan of snobs.

I wonder what his opinion would be, then, of the dogged American writer dutifully putting out relevant, applicable information fully capable of making American gardens better even if, let’s surmise, that writer happened to be some clause-mauling, clod-hopping, t-shirt wearing, Big Gulp slurping, overworked, underpaid, privately insured, American public garden worker who finds his will to live sustained only by the slim hope of a Timber Press contract.[vi] Yeah, I wonder. 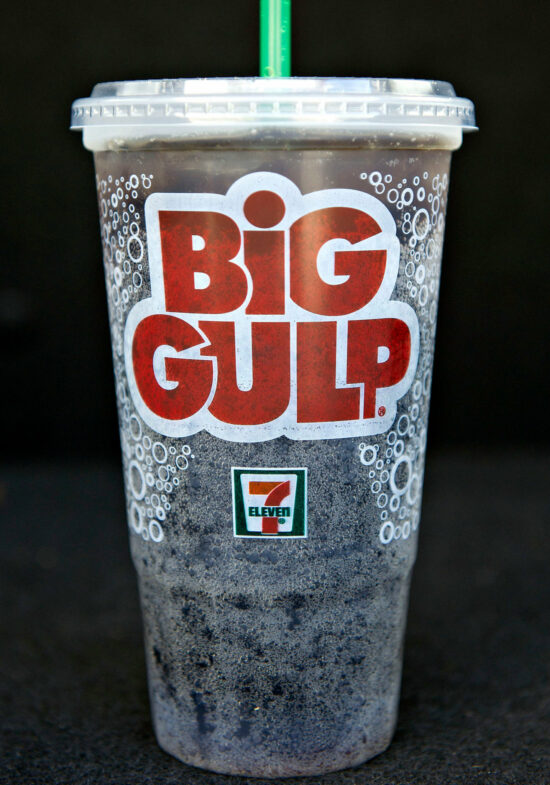 Likewise, I wonder what his opinion would be of the reader who goes all a quiver, requiring a coterie of handmaids to scurry hither and thither until full consciousness is restored, simply because Penelope Hobhouse articulated a description of a white garden that included no less than three particularly clever turns of phrase?

I don’t know much about Christopher Lloyd, but I’m just going to guess that it would be more likely he’d be found in a pub with the former than seen sipping tea with the latter.

I react to irony about the same way Marianne reacts to Monty Don undressing figs with his fingers, so I’m very glad no one is here right now. But I don’t expect that recognizing such irony is the forte of one who writes, “The best British garden writers have honed the ability to inflict dagger-sized wounds with the prick of a pin.” Can we pause it right here? Can we think about that for just a minute? Can you all just humour me while I ask, “What kind of she-devil admires such a thing?” Maybe I’m too sensitive. Maybe I’m too kind. Maybe I’ve got a little attitude, being as I am, one who has spent the month since Marianne’s rebuttal struggling to keep my internal organs from slithering out of just such a wound, but does such a sentiment really exemplify an ideal we all really should want in good garden writing?

Later in her piece, Marianne goes on to argue that British garden writers are at an advantage because they ride upon the tide of a long gardening culture. She states, “They [the Brits] have simply been doing it longer. Their gardens are indeed older. Their tools are better oiled.” [citation needed] “There is nothing television worthy,” she continues, “about a rumpled and grubby Monty Don; except, there is.”[vii] All this, in my jaded opinion, is simply an eloquent way of offering a dismissive, backhanded excuse to American writers who are, apparently, hamstrung by a coast to coast populace of hopelessly un-horticultural hominids who need any narrative that might be gaining momentum to be repeatedly interrupted so they can be reminded of which part of a plant is supposed to be pretty and which part goes in the ground. 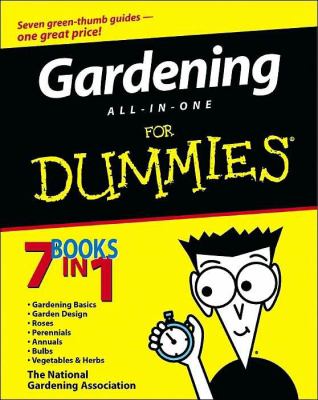 Sold only in the United States.

To this, I again raise the main point from my Horticulture Magazine column. Is the gulf between English gardening success and ours the fault of inarticulate American garden writers woefully trying to counsel a dismally ignorant American gardening public? Or is it because American gardeners, so easily impressed by Victorian language, vainly and stubbornly continue to force square, gulf stream-buffered English style gardens and the favourite garden plants of spoilt English garden writing prats into bitterly continental, round, American planting holes? 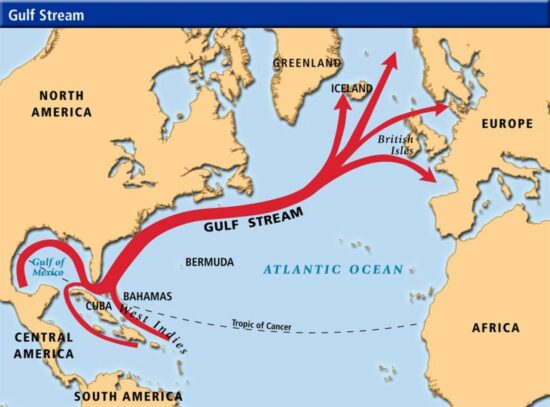 There is only so much time in a day. There is only so much room on a shelf. How many fresh, exciting, informed books that could lead to more and better American gardens go unpublished and therefore unread because so many seek the entertaining flourish of Lloyd dissecting snobs with the prick of his pin and because Beth Chatto’s Damp Garden continues to sell so well? Despite Chatto suggesting readers plant Meconopsis (the cause of all my frustrations), Heracleum mantegazzianum (a wickedly invasive weed), and Houttuynia cordata (the leading cause of American gardener suicides).

So, in the end, Marianne, you brought me to my knees, but you didn’t change my mind. On some things, as friends, we’ll just have to agree to disagree.

That said, we do share a common fondness for Hugh Johnson, and I recommend The Principles of Gardening to anyone who will listen.[viii] No better guide to the full glorious spectrum of gardening exists anywhere. I’m not sure if it’s still in print, but it is available on Amazon, and everyone reading this (you are getting sleepy…sleepy) must go buy it (when you awake). I need to also mention John Seymour, author of the Self-Sufficient Gardener, whose infectious enthusiasm hooked me to the point where, for an anachronistic period of time, we just about went off the grid.[ix] Never did, though, develop a taste for parsnips. 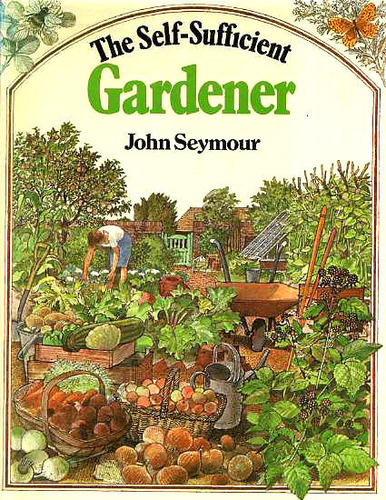 So, time to let bygones be bygones. I’ll recover. Don’t worry about me. And I look forward to the next time our paths cross. I just learned I’ll be speaking in Waynesboro, Virginia next March. Somewhere near you, Marianne? Maybe Michele and I can swing by and enjoy “the wine that flows softly and smoothly.” We’ll laugh at the best barbs from your rebuttal, and at my floundering efforts here. I’ll try to live up to my attributes, which you were so kind to ascribe, and do my best to entertain, be clever, and self-deprecate. And, you and Michele can both enjoy uproarious conversation about Shakespeare, corgis, Prince Harry, Shepherd’s pie, and Monty Don long into the night. I’ll just good-naturedly smile and nod, struggle to follow, flail to “get” the constant stream of witticisms, and stand flabbergasted by minds that can retain something they read only once and then quote off into the future, seemingly at will. I wish I was like that, but I’m just not. Not even close. But, in the end, I’m okay with being a passionate advocate for more and better American gardens and any writing that pushes that forward, whether such writing inflicts dagger sized wounds or not.

[iv] If one is dealt the cancer card, it is considered poor form to not use it. I once avoided getting beat up by saying, “Don’t. Stop, I’ve got cancer.” BTW, free and clear now. Thankfully.

[vii] What does Marianne’s husband know of this Monty Don?

[viii] Oddly, I’m not so fond of Johnson’s book on wine I bought, which bogged down in wineries, regions, varietals and offered few opinions on good wines and values that could guide my wine-drinking journey. Which, come to think of it, is why I like the American garden writer Michael Dirr over, say, Hillier. You might not always agree with his opinions, but Dirr at least puts them out there, and doesn’t phone it in by simply describing the leaves in botanical language.

[ix] Include the 1970s BBC program, The Good Life as also partly responsible for this madness.

He has published over 100 magazine articles for several publications, and now writes the Back or Magazine columns for Horticulture and Ohio Gardener.

Scott is an ONLA Certified Landscape Technician and an ISA Certified Arborist, and lives a life of routine bliss with his “out of his league” wife, a blind dog, a plotting cat, and an over-sized, under-maintained garden. 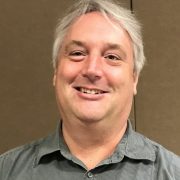