Parkland, FL School Garden as Place for Learning and Healing

That’s astronomy teacher and garden-maker Kyle Jeter on the right.

You’ve seen my photos of Cornell and environs; now for a report from the American Horticultural Society’s Children and Youth Garden Symposium I was there to attend.

The highlight for me was the Community Forum on Gardens as Haven, with three great speakers and Q&A. One of the speakers, all the way from Parkland, Florida, was Kyle Jeter, who teaches astronomy at Marjory Stoneman Douglas High School, now tragically famous for the mass shooting there February 14 of this year.

Jeter had spearheaded efforts in 2016 to create a garden for the school – called Marjory’s Garden – despite knowing nothing (he swears!) about gardening, because he’s such a fan of “project-based learning,” he told us, and the garden would provide hands-on STEAM learning opportunities, promote conservation, and honor the legacy of environmentalist Marjory Stoneman Douglas. (Note that STEM is now STEAM, with the addition of arts.)

The garden was doing all that before the shooting. After, Jeter saw the staff and students embrace the garden as a space for reflection and healing in the wake of tragedy, and he became devoted to finishing the garden.

Most poignant to me was his telling of the immediate aftermath of the shooting, when the school was shut down completely and no one was there to water the garden. Jeter had to talk police into letting him on the grounds to do that, by telling them “I don’t want the kids coming back to school and seeing dead plants.” 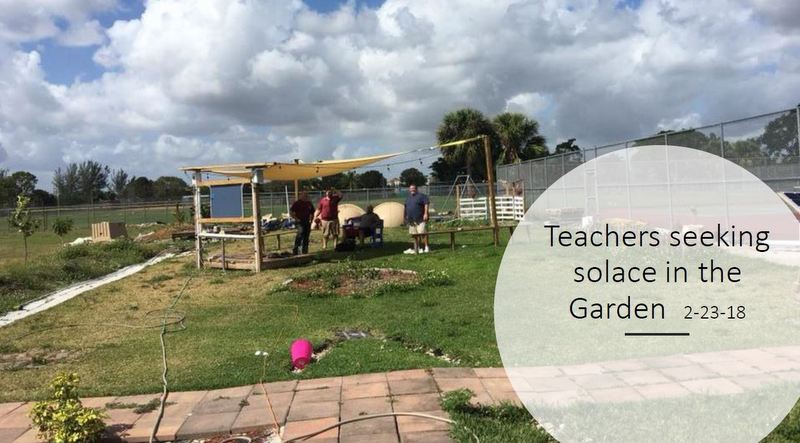 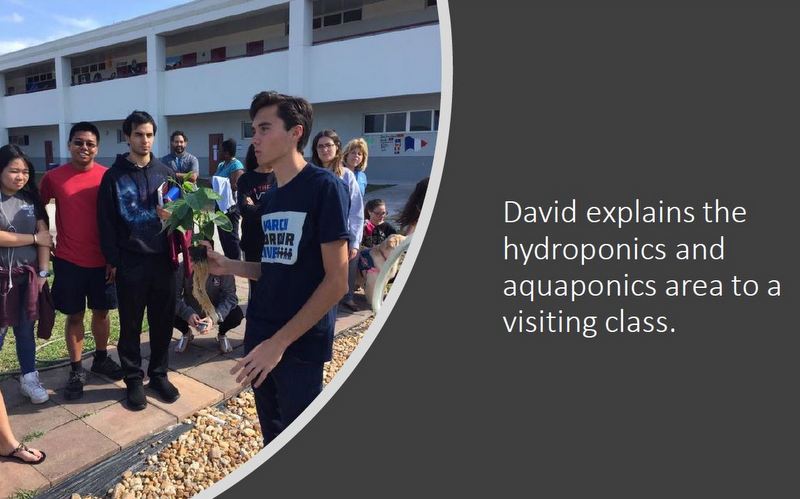 Anyone still wondering if the school’s anti-gun student leaders were hired actors? Here’s one of them – David Hogg, whom Jeter told us “worked harder than any other student” on the garden. We also learned that Emma Gonzalez (“always the first to volunteer for anything at the school”) painted the benches in the garden. 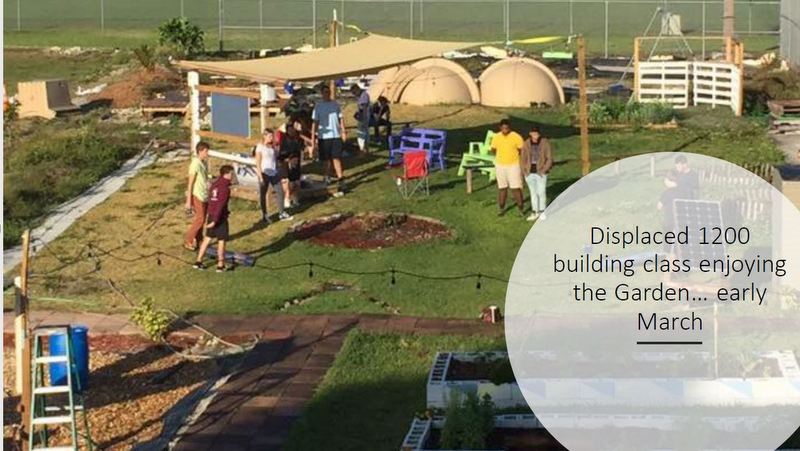 With the campus partially closed after the shooting, the garden became the site for classes of all types.

Expanding Use of the Garden

My other take-away from Jeter’s talk is that school gardens can be so much more than places to grow plants, though even growing plants can teach more than horticulture. 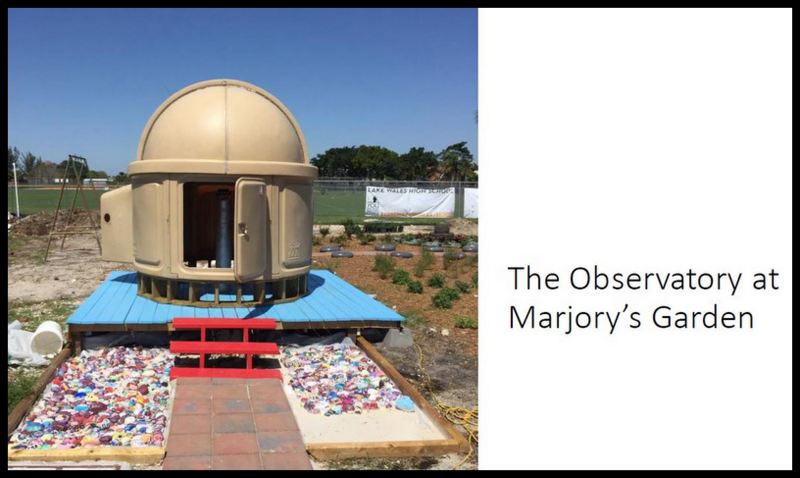 Installing and using solar panels was a teaching event, as was the use of an hydroponic A-frame, and their attempt at aquaponics. And a no-brainer for this astronomy teacher was installing an observatory there, and now the garden hosts “Full Moon Yoga” events with telescope-viewing afterwards. 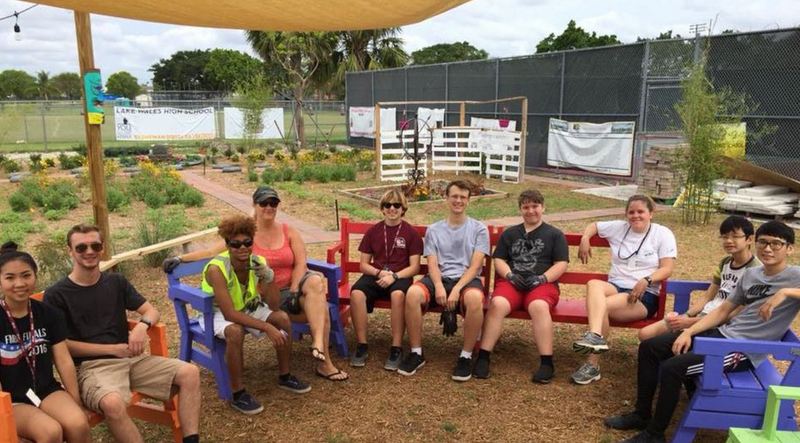 More shade structures are being added to this South Florida garden, so it can be used even more.

Jeter’s slides also drove home for me the radical notion that gardens don’t have to be just places of beauty; they can be so much more.

More on Gardens as Haven 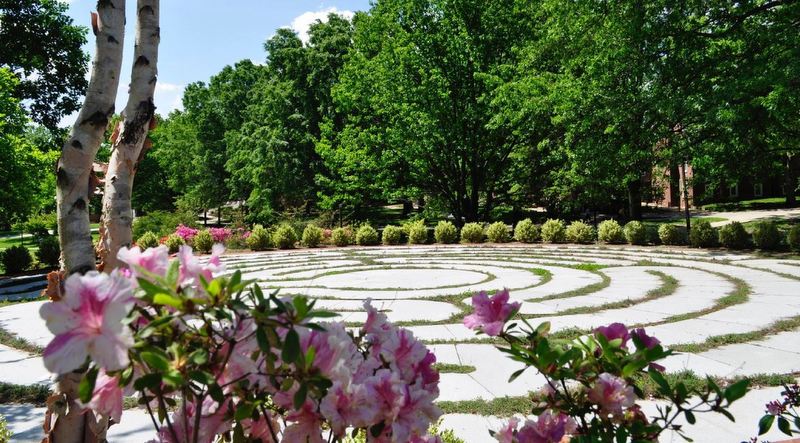 Labyrinth on the University of Maryland College Park campus

Time for a quick mention of the other two excellent speakers on gardens as haven. Marcia Guenzler-Stevens, Director of the Student Union at the University of Maryland, talked about their Garden of Reflection and Remembrance, which opened in 2011. Important elements of the garden are benches, water, a labyrinth, and an all-weather journals for students to write in, which they did in great numbers. 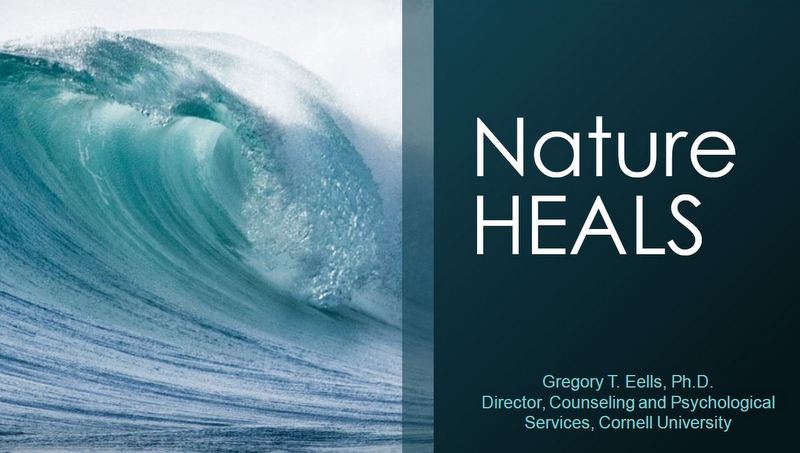 Greg Eells, director of counseling and psychological services for Cornell Health, talked about the healing nature of nature. Under the program Nature Rx@Cornell he started, therapists hand out prescriptions cards recommending “dosages” of outdoors time, from once to seven times a week. In the first year of this pilot program, 250 such prescriptions were given by 24 therapists. The effects will be followed and reported on.

Eels gave credit to Dr. Robert Zarr in D.C. (“a real hero”), for starting the successful Park Rx program under which doctors prescribe visits and activities in nearby parks. (I agree, and reported here on Dr. Zarr.)