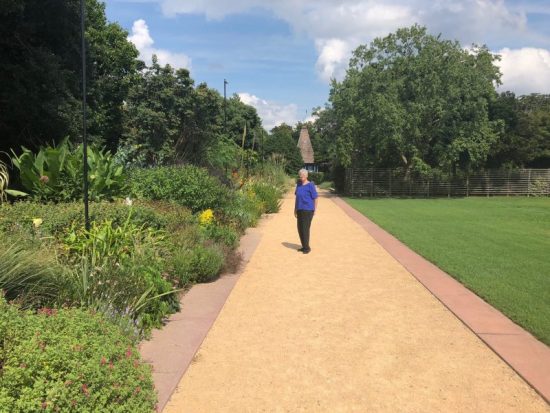 Edith Eddleman and the Jekyll Border at the J.C. Raulston Arboretum.

I arrived in Raleigh a few days before last week’s Perennial Plant Association (PPA) Symposium. I checked into the hotel and made a beeline for the J.C. Raulston Arboretum. I may sound like an aging rocker on a farewell tour, but it had been ten years since I’d last been there, and I’m not sure when I’ll return.

I’ve had a long history with the arboretum. I was one of J.C. Raulston’s many fans, and for 15 years, when I was living in Western North Carolina, I would visit annually. I met garden designer Edith Eddleman, a longtime arboretum volunteer, in 1981, three days before my daughter Molly was born.

What the arboretum lacks in size (ten acres) it makes up for with inspiration. As Raulston was a prolific collector, there have always been plenty of plant rarities, so I can consistently count on a few surprises—Asian woodland asarums in the lath house or a towering desert Dasylirion wheeleri in the long border.

I’d never seen a Geophyte Garden, however, nor even known what a geophyte was. A geophyte (geo= earth; phyte = plant or growth) is an underground storage organ. OK, I get it—bulbs, corms, tubers and rhizomes. So everything from a Narcissus bulb to a Gladiolus corm to Canna rhizomes counts as a geophyte. Geophyte would be a good word to try and stump your gardening chums with.

The arboretum’s Jekyll Border has long been my focus for garden pilgrimages to the Raleigh area. An army of J.C. Raulston’s horticulture students first planted the border in 1983.  Designer Edith Eddleman quickly found a co-conspirator. She received a letter in 1985 from Doug Ruhren, a  talented gardener whose reputation she had followed via the local grapevine. When Doug asked Edith if she needed any help on the border, she replied, “What are you doing on Thursday?” 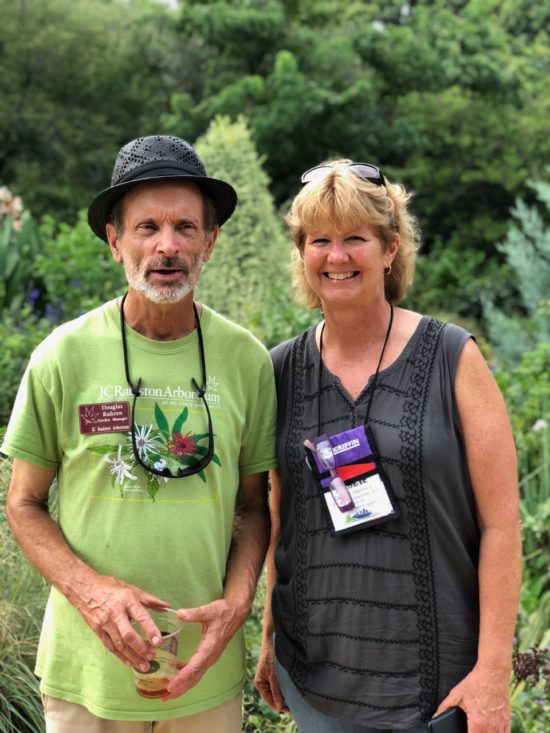 Leaves of absence, for personal and professional reasons, took them elsewhere for a few years, but they both returned in the Spring of 2012.

Edith and eight committed volunteers meet for a couple of hours every week; Doug was hired as the fulltime arboretum manager in 2017 but still volunteers on the border.

In North America there are not many Gertrude Jekyll-style borders— a whopping big 18’ wide by 300’ long.  Some might argue they are old-fashioned. (English borders are what everyone wanted in the 1980s.) I see the good borders as experimental and dynamic compositions—works in progress. Great Dixter and the Raulston long border are where you’ll find lots of ideas—the dozens of vignettes within the border. Sometimes they work; sometimes they don’t.

Great Dixter’s Fergus Garrett emphasized the risks last week in his lecture at the PPA Symposium. The conductor (designer) must be willing to take a chance and not be too burdened by the conflict between tradition and freedom of expression (mixing bananas with Joe-Pye weed, for example). If the composition succeeds, how thrilling! If it doesn’t, don’t pout about it. Move on. Pull out the offending misfits, and replant. Don’t forget your native pollinators.

The J.C. Raulston long border, inspired by Gertrude Jekyll’s skilled use of plants is “…a distinct scheme of color arrangement based on how the eye responds to color.” Bold foliage— yuccas, grasses and gray and glaucous-foliaged plants anchor the two ends of the border. Each end of the border is a study in contrasts, as strong violet colored flowers might be combined with soft yellow or a pale pink. These delicate contrasts prepare the eye in Jekyll’s words: “…for the splendour of warm…colour harmonies of strong yellows, orange, scarlet and red…culminating in gorgeousness.” When the eye is saturated by these intense colors, it relaxes as it moves over the restful plant combinations that complete the border. Jekyll likened this visual experience to moving from shade into: “…the brilliant glow of hottest sunshine and coming again to the comfort of coolest shade.” 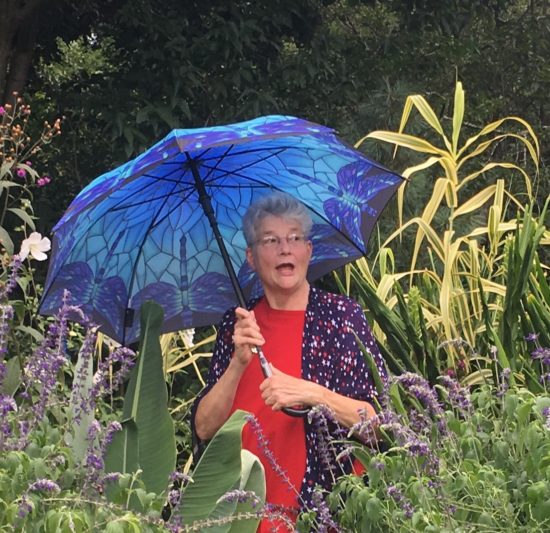 Edith and Doug don’t slavishly follow Jekyll’s use of color, but it is their guiding star. They have a different plant palette. Jekyll used plants suitable for an English garden, such as yuccas and Euphorbia characias. These work well in Raleigh, also, but Edith and Doug experiment with plants adapted for Raleigh’s muggy summers.

OK, so you don’t have the space or the time to do an 18’x 300’ border. It’s August, people. You’re in luck! A small space sounds a whole lot to easier to maintain in late summer than 18’x 300’. Even the smallest gardens can contain plant combinations, adapting Gertrude Jekyll’s color theory.

Edith explains: “At its heart, the long border at the J.C. Raulston Arboretum is about the pleasure of gardening, the infinite possibilities of plant combinations and the promise that this is possible no matter the size of our gardens, large or small, whether we have pots on the terrace or window boxes.

…Here follow a few plant combinations which have brought our interpretation of Jekyll’s border to life in Raleigh, NC—Zone 7b.”

Imagine the Jekyll Border as either a short walk or a long stroll. If you’re poking along the border, oohing and aahing, as I tend to do, you could easily spend an hour or more walking from one end to the other in a happy-go-lucky, timeless manner.

I like to stroll the Jekyll border with a friend or two. It’s handy to have a younger friend along, one with a nimbler mind, so you don’t have to put up with my Medicare-ready demographic. We, more often, stumble with plant names: “Um, er…I know what it is; it’ll come to me.” Don’t blame it on Latin. (Oh, we used to be so good with botanic names.) Nouns become an obstacle when you get older. So make friends with young gardeners, and keep a pencil and paper handy. 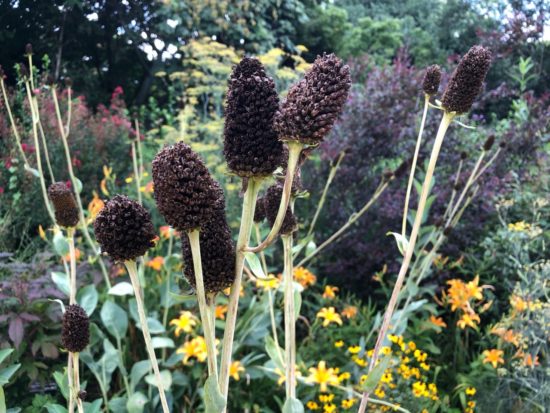 The big, fat, thimble-shaped seeds on Rudbeckia maxima fascinate me. What a versatile plant.  The yellow blooms look like little somberos. The big gray-green, paddle-shaped leaves are a bonus. I’m going to throw my sombrero in the ring with everyone else who is praising Pycnanthemum muticum for its extraordinary pollinator qualities. It’ll gobble up some space if you’ve got the room. If you don’t have the room, make some room. What a pleasure it was to see the huge white blooms of the towering 12’ tall Eupatorium ‘Bartered Bride.’

I love the arboretum’s Jekyll Border for its richness of colors, textures and imaginative combinations, but mostly I’m crazy about Edith Eddleman and Doug Ruhren. Gardening doesn’t happen in a void. A garden is only possible with passionate, devoted gardeners. 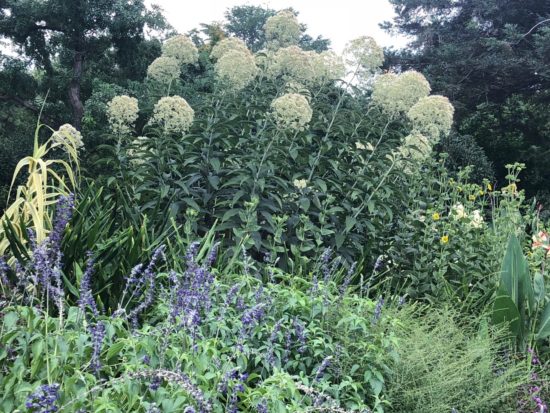 I thought about my mother a lot on this trip. She loved her garden. (I drove by her childhood home in Winston-Salem on my way down.) She would have turned 90 while I was in Raleigh. I know what she would have said if she’d been with me, walking alongside the Raulston long border last week. I can hear her Piedmont North Carolina accent. “I am thrilled to pieces to be here.”

I was thrilled to pieces to be in the presence of Doug and Edith and the Jekyll Border.