How a Historic Garden Club is Changing with the Times 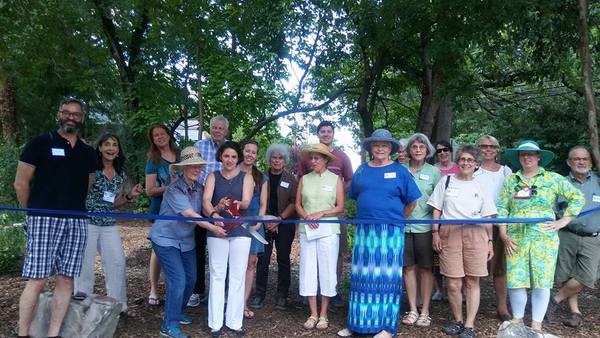 “Takoma Hort” dedicates new garden in honor of its centennial.

Who’s old enough to have belonged to a garden club back when they were known as cliques for privileged white women? (The Savannah Garden Club made famous in Midnight in the Garden of Good and Evil comes to mind – the boozy lunches, the expelling of members for getting divorced.)

For years I was active in one of the oldest garden clubs in the U.S. – Maryland’s Takoma Horticultural Club, established in 1916. I used to claim that it may even be THE oldest in the country, though according to Wiki,  that title goes to a club in Athens, Ga, established in 1891. Oops.

Curious about today’s garden clubs and how they may be changing, I asked the gang at “Takoma Hort” how that club has changed because at 101 and counting, it’s continues to thrive.

Out with Flower Shows

The club’s origin story is unusual among garden clubs, as it was started by men, mostly hort geeks who worked at a nearby plant research center.  But women were soon allowed in and the focus expanded to include flower shows, which were elaborate, with 100+ categories, certified judges, and the need for 20+ volunteers. The shows were largely abandoned long ago, and now I only hear of the flower shows put on by plant societies.

The club’s speaker-based meetings are still popular, but the topics have changed in recent years. Now the big draws are talks that cover food-growing and eco-friendly gardening. 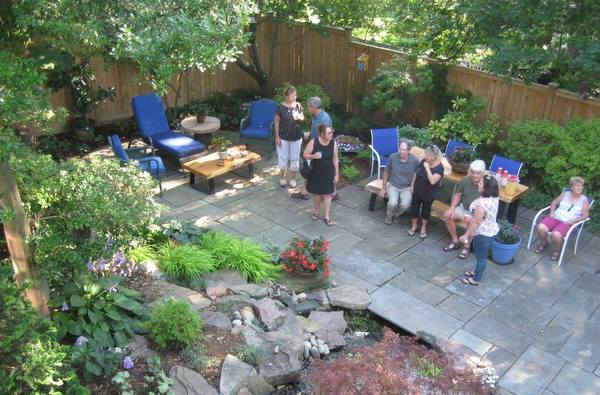 Open Gardens have replaced garden tours, which are more labor-intensive events. Open Gardens are easy because just one member’s garden is open to drop-ins on a Friday night in season. I’m told these social and learning events are very popular, and benefit the club by attracting neighbors and even members of other garden clubs, resulting in new members for Takoma Hort. Membership Chair Carole Galati tells me they’re “great for club PR and show how much fun gardeners can have!” 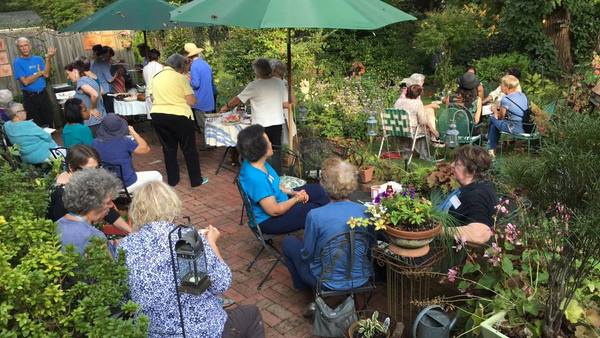 More social events include a summer picnic and a potluck dinner in winter.

Regular plant swaps are extremely popular, and the activity I miss most since letting my membership lapse. Members go home with free plants and tips on growing them.

Free garden consultations, where experienced gardeners in the club visit a member’s garden to offer suggestions, are an obvious benefit to joining. 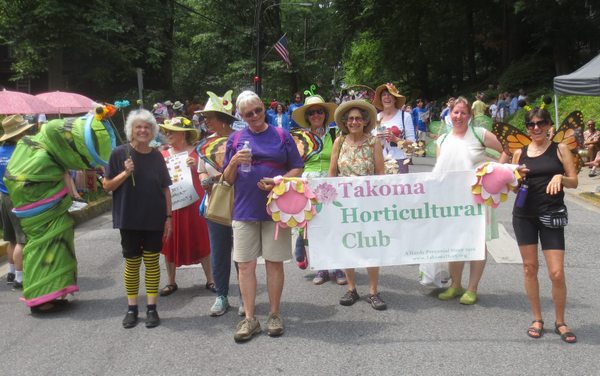 Marching in the town’s July 4 Parade is back, after a lapse, and gets the attention of the whole community.

I’m told that the jury’s still out on field trips, an event the club has tried lately. They’re a lot of work to organize and so far, the turnout has been low. But they haven’t given up – they’re planning a family-oriented trip in 2018 to the local Audobon Society, something that may attract younger gardeners with kids. 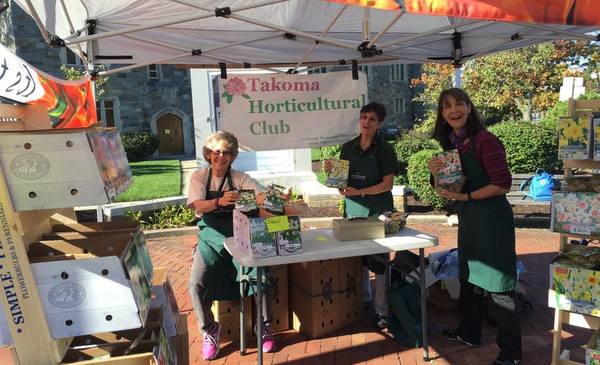 Clearly the most labor-intensive of the club’s yearly activities is the buying and selling of massive quantities of bulbs. It was originally done as a money-saving project (through buying in bulk) but today the savings aren’t so great, yet the project continues because, I’m told, “It’s a tradition and people look forward to it.”

Printed newsletters were abandoned at least 10 years ago to save on money and volunteer time, and almost all members had access to computers by then anyway. (Monthly newsletters are now sent out by email and posted to the website.)  Around the same time the club launched its website and started its popular Yahoo group, enabling members to get advice from each other, offer their extra plants, pass on gardening news, and more.  The club has recently created a group on Facebook, where it’s so easy to share images of plants and gardens.

Remarkably, club dues are still just $12 a year – a bargain by any measure. That’s the paltry price to participate in all club activities, though speaker meetings are open to nonmembers.

One big improvement in the club’s finances, enabling it to keep the dues that low, is the decision to leave the local federation of garden clubs, which charges clubs $8 per member/per year to be part of the federation. Get that? Takoma Hort had to pass along 2/3 of its dues income to the federation, with little to no benefit. Years ago the club needed the federation to provide judges for its flower shows, but get this – the judges had to be served lunch, specifically on real china, and generally treated like the society ladies they considered themselves.