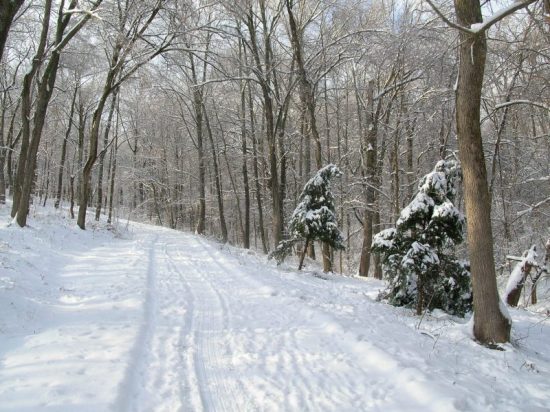 “A driveway so daunting…” Beautiful in the snow.

Wound up working part-time at the edgiest nursery in Cincinnati, Mountain Laurel Nursery, as I plotted a way to go full time in the business even as the nursery descended into insolvency, the result of the Hamilton County closing the road from one direction two summers in a row and Clermont County closing it from the other direction the third. It didn’t help matters that the plant geek, visionary owner, Robin Hastie, had also suffered bad health. It was good while it lasted, and I learned a lot. I also I met a young horticulturist there named Drew. We couldn’t have been more different. He was a dreadlocked, reggae-listening free spirit living with an unimaginably hot girlfriend on the fringes. I was a blues-listening, frustrated-free-spirit, thirty-something yuppie (I suppose), with two kids, a day job, and a house in the suburbs. But we both were passionate about plants, and we hit it off. At one point, he directed to me a landscaping job he didn’t have time for, and that’s how I met Mort and Barbara Libby. 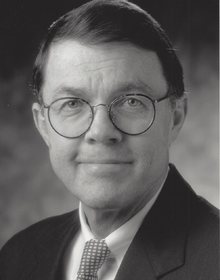 I went to work for them soon after. The initial meeting was interesting. I wound my way up a switch backing, ascending driveway that would make Appalachia proud—a driveway so daunting, in fact, that the city required the house to have a sprinkler system because they couldn’t be sure a fire truck could get to it. A driveway that Mort had a car slide off of and into the creek. A driveway where I ran out of gas on multiple occasions, not because I was actually out of gas, but because the incline was such that whatever gas I had had followed gravity too far away from the intake. But if you were courageous, and lucky, the driveway eventually led to a modest A-frame, a pole barn, a garage, and a terrifying dog named Josh.

The property was twenty something acres. I was assigned the job of “helping Mort” tend to it. A vague beginning that never really got any clearer. Early on, I ran into a term that wound up haunting me for a while. I had turned a front and center slope between the garage and the house into a high pH, heavy clay, shady version of a tidy rock garden. “Too Indian Hill”, was the response. Indian Hill is the rich part of Cincinnati. How to tame a wild landscape without over-subscribing to the conventions of suburban or estate gardening. Holy shit! A challenge! Eventually I came to learn that what Mort really wanted was something resembling lake cottages in the woods of Maine where he had grown up. Per usual, it took me far longer than it should have. 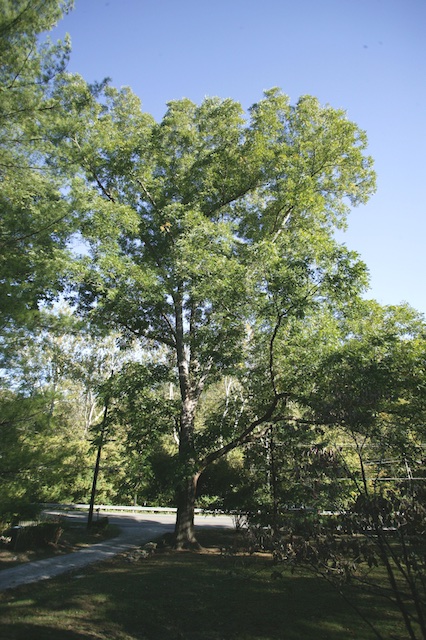 Over the next 15 years or so, I regularly showed up to whack weeds, tend to trees, try to nurse almost anything I planted on that dry, rocky ridge top to something resembling health, curse the ever expanding deer herd, and do whatever I could to please Mort and Barbara, who were not always on the same page. There were some successes, but there were also glaring failures. I did clear the property of invasive Amur honeysuckle, and the results in the forest transformed the place from something cut out of the jungle to a beautiful forest of rolling land, but I also totally botched a back patio, and some other things I’d rather not recall. In the end, the forces of my life were diverting me away just as the Libbys decided to downsize and move, and we parted on good terms. Although I’m sure we all intended to stay in touch, and promised to, somehow it didn’t happen.

Eventually I felt terrible about it, and sent them both an email expressing how much I appreciated their support for me, that they had been responsible for much of my growth in this vocation, and my intention to reconnect. This was in April. Barbara wrote back that Mort was ill with thyroid cancer, and that I should come visit. I meant to. Again, never managed it. Mort died in May. I found out late in June.

Mort was one of those people you admire from the start. He was friendly, smart, an ex-Marine, a Rhode Island School of Design educated artist turned savvy businessman. He ran LPK, one of the world’s top branding companies, headquartered on sleepy 8th St. in Cincinnati, Ohio. He ran a company that was innovative, not just in their products they delivered but also in its business practices. LPK became an employee owned company long before that was much of a thing. From his obituary, it says he “believed in mentoring young talent, and his door was open to all.” That was him to a tee. That’s what he did for me. 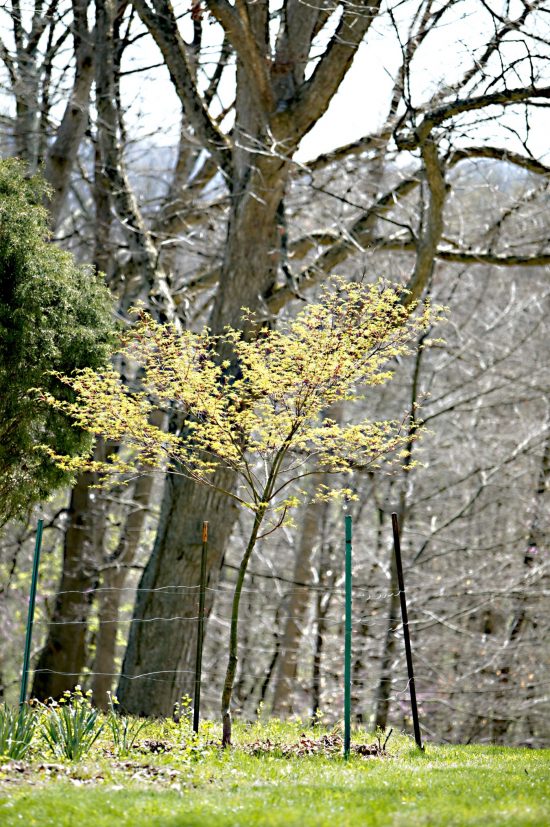 The Japanese maple, Acer palmatum var. dissectum ‘Seiryu’, is safe behind deer protection. Good thing. 23 deer were once counted in a single view.

Mort never argued a single point on any bill I submitted. He never questioned a thing when I started removing honeysuckle foot by foot at a seriously questionable amount of time and money. I eventually realized that he was a patron—paying me as much to learn as for the work I accomplished. He knew that much of what I did for him, I was doing for the first time. He was not only okay with this; I believe he reveled in it. When he learned my son was going to go to the Columbus College of Art and Design, he met with him on multiple occasions to offer advice and encouragement. Later, he’d almost always ask how Tom was doing.

I really wanted a bona friendship with Mort. We tried to talk sports, politics, history—things we shared in common, but I think the awkwardness of my admiration got in the way. I was trying too hard. There were too many pregnant pauses. I said some stupid things. I’ve gotten better about this since. Actually learned how to better reside in my own skin from my son, who does it better than anyone I’ve ever known. And I got older, eventually feeling like I’d seen enough to have more confidence. 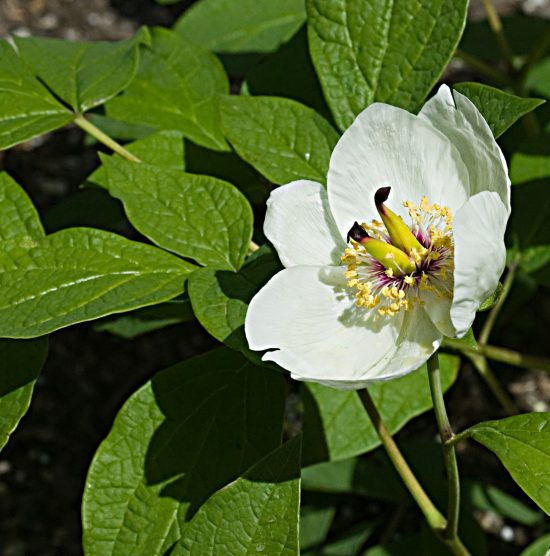 Paeonia japonica at the Libbys. Tolerant of dry shade and clay soil.

In my backdoor, surreptitious, incursion into wherever I am in the world of horticulture, I have ridden on the shoulders of some giants. Guy Sternberg became a friend. Peter Zale, the most brilliant young plants genius on the planet, is my best friend. My boss, Steve Foltz is no slouch, and through him and my job at the Cincinnati Zoo & Botanical Garden I’ve gotten to hang out with people like Bill Hendricks, Paul Cappiello, Tim Brotzman, Jimmy Turner, Allen Bush, Bill Barnes, John McGee, the list goes on and on. Claudia West came and spoke at one of our symposiums, and, of course, I fell in love. It’s ridiculous who I’ve gotten to know and count as colleagues and friends, but as much as anyone it was Mort Libby—writing checks and giving me rope—who is responsible for where I am now. Is that at the top tier of the Horticultural World? It’s not, and it never will be. I’m running out of brain cells and time. But I can call almost anyone in that august club and have my message returned, and I can only marvel at the path that got me to this place. As luck would have it, I find myself in something of a position to mentor young talent. I intend to do so. In this odd eddy where we find horticulture and gardening right now, I think that’s something we all ought to consider.

I’m so sorry I never followed up and visited after I learned of Mort’s illness, but I’m so glad I sent an email expressing my gratitude to him. I know I was a very small part of his big and expansive life, but I’m proud and happy for at least that. God rest his soul. He was one of the good ones. Maybe on the other side my stupid awkwardness will be gone. We’ll hang out.