Master Logger, 42, Did the Job on our Walnut Tree 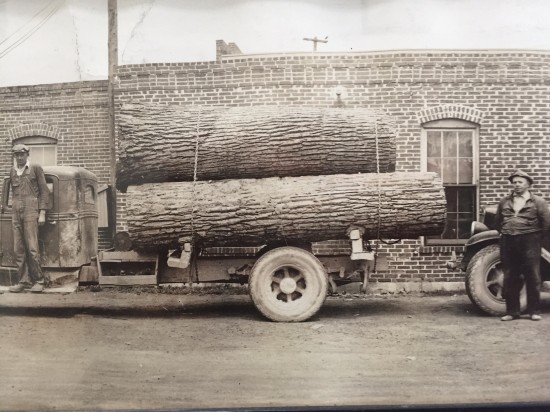 Indiana tulip poplars in the 1920s.

There is an abandoned fencerow on our Salvisa, Kentucky, farm. It’s marked clearly. A dozen black walnut trees Juglans nigra grow in a straight line, running up a small hill toward the rising sun. A generation ago, squirrels stored thousands of walnuts and forgot about them. The trees, nearly 50 years old, grew like weeds.

There are dozens of trees scattered around the farm. If the walnuts are left lying around, they become ankle twisters. You can’t avoid them when walking anywhere close to a black walnut tree in the autumn or early winter. Isaac Rogers, a junior at Mercer County High School who lives nearby with his family, made some pocket money this fall with a friend, collecting the nuts. I was mighty glad the boys gathered them.

We cut down one tree three years ago and moved the 18-inch diameter logs to a spot where they lay waiting in the shadow of the other walnut trees along the old fencerow. The logs were considerably smaller than the tulip poplar logs in the photo above 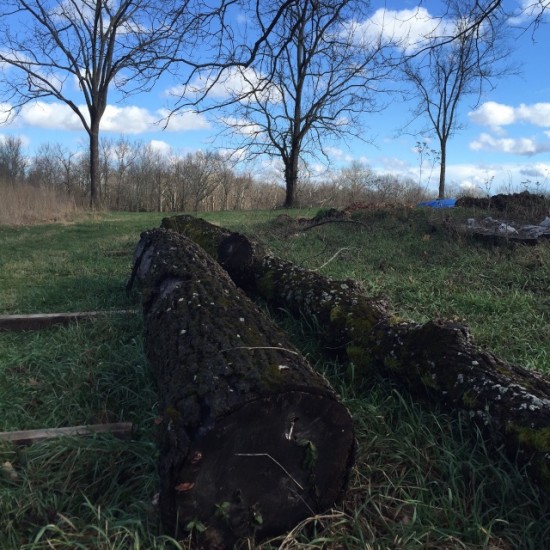 Mac Reid, my friend and neighbor, had an even bigger walnut log from a tree he’d cut down on the back of his farm a few miles away. We agreed two years ago that we should cut the logs up into lumber. We waited. My walnut logs risked decay by the month.

Mark Peachey, who lives across the Salt River from us, gave me the phone number for a mobile sawmill.  When I called Bill Jones, the owner, and asked a few questions about his milling process and the fees, he answered methodically and gave warm encouragement for his interest in our small job. Bill explained his reasonable set-up charge and hourly rate. There was one possible add-on. He said if he hit any nails or barbed wire, we would owe him $30 for a new saw blade. 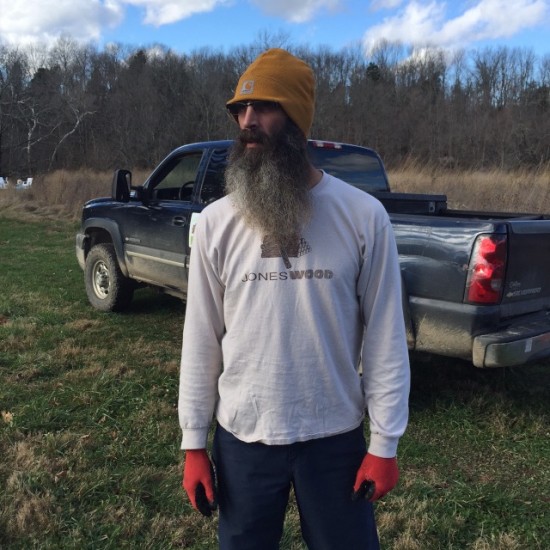 Bill Jones’s professionalism and deep, soft-spoken voice fooled me. I was certain the man at the other end of the phone would be in his late 60s or even older.

The Master logger and Frankfort, Kentucky, resident is all of 42.

Bill Jones, in person, is lean and muscular. His long graying beard reminded me of Billy Gibbons of ZZ Top. Or maybe the bearded dude of the Oak Ridge Boys, William Lee Golden, back in his younger days.

Bill Jones got down to business. While he was setting up his mobile gear, he said we shouldn’t worry if he hit any embedded bullets during the saw milling. We hit two bullets. The saw blade cuts right through the soft lead. 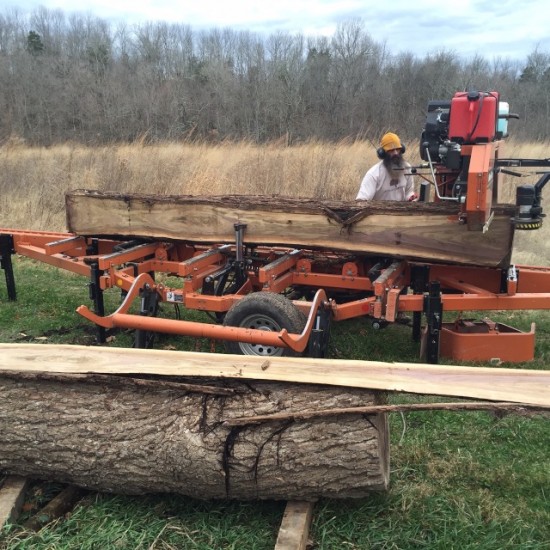 Bill said one of the bullets, judging by the growth rings, would put the time of the gunshot at 20-25 years ago. I laughed and thought my neighbor Otis Knox might have been using the walnut tree outside his old house for target practice.

I called Otis, who once lived here and planted dozens of trees, and asked, “Were you shooting up the trees down here?”

He paused for a second and said, “I don’t shoot up trees.”

Otis had grown up east of here, in the mountains of Wolfe County. He has always loved trees—maybe more than his own guns. He planted a row of white pines on the farm in 1972. They look terrific today.

Otis couldn’t understand how anyone would shoot a tree.  He complained that some of his buddies had been deer hunting on his farm last month and shot up a hickory tree. Otis got after them pretty hard. He didn’t think the tree would survive the shoot up. His friends didn’t take kindly to the scolding.

Bill Jones, after a few blustery hours, was packing up his mobile sawmill. We loaded one and two-inch thick, eight-foot foot long walnut boards onto my pick-up and parked it in the barn. Bill said eight to ten months of curing, stacked up in the barn, would bring the moisture level to 18 percent. (Two years of air-drying would be better for the two-inch pieces) Kiln drying will be needed to bring the moisture to seven to ten percent for furniture making. 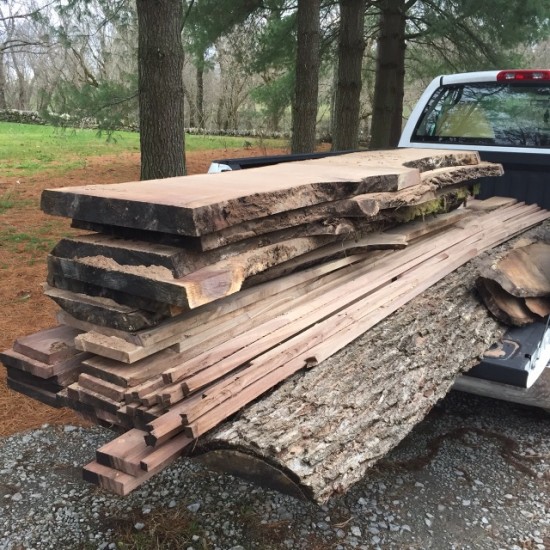 We don’t have any idea what we’ll do with the walnut lumber. Benches, a table and paneling are all part of the discussion. The barn, in the meantime, suddenly has the new, fresh fragrance of walnut.

Just down the hill, 125 feet from the barn, in the bottomland adjacent to the Salt River, is the biggest black walnut on the farm. Rose’s brother Robin gave us a rusted hay rake that had been lying around his place for years. He thought we should let it lie around our place for years. It was parked under the large walnut, weeds growing up around it, until my arborist friend  Robert Rollins came out. He and his crew are excellent climbers and good with ropes and wires. Robert is a tree craftsman with a fun, artistic streak. 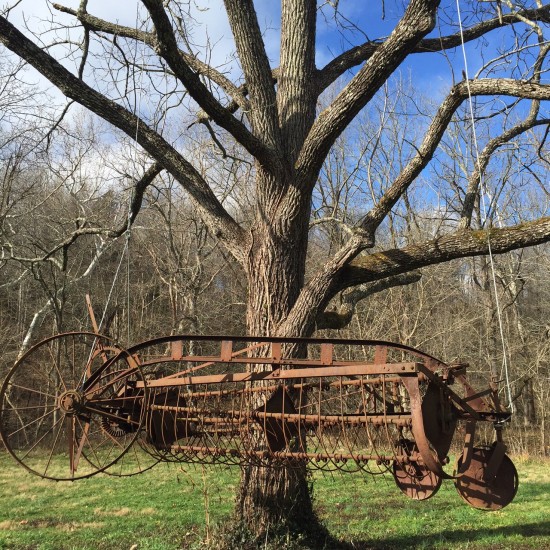 I’ve not checked closely but, my guess is we’ve got the first-of-its-kind hay rake in a walnut tree. It’s a good conversation piece.

“What’s with the hay rake in the tree?” we’ve been asked.

I’m sure Alexander Calder was asked about what in the hell his sculptures were, too.

Eyes roll. No one is fooled. It’s just a hay rake in a walnut tree.