I like the versatility of my BCS two-wheel tractor with all the different implements it can operate, but if I were shopping for a dedicated garden tiller, I would certainly get the new vertical tine model from Troy-Bilt.

Properly known as the “Bronco Axis Vertical Tine Garden Tiller,”  this is the best-designed machine of its type I have encountered.  Its double blades rotate horizontally like giant egg beaters; start the machine up and the blades bore down into the ground then, as the tiller’s wheels rotate, gradually work their way forward to mix the soil. 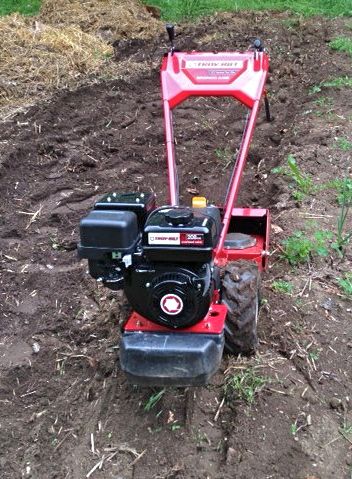 Unlike a conventional tiller, this machine doesn’t hop and skip its way over the beds.   It moves so smoothly that you really can control it with one hand, walking alongside rather than over the trail of freshly tilled soil.    It also seemed more efficient in that it would till to the desired depth in a single pass, rather than requiring repeated passes like most conventionally constructed tillers.

A handy feature is the tine-reverse – if the machine should pick up a rock or root and the tines jam, you pull a lever, and the tines rotate in reverse to spit out the obstruction.  Only once when I was using this tiller did it find a rock just the right size and shape to jam so tightly that the reverse wouldn’t operate and I had to knock the rock loose manually.

The only real short-coming I discovered was that this machine is difficult to turn around in the field.  On a firm surface, I could lift the handlebars far enough to raise the tines off the ground and swivel the machine on its wheels; in a garden bed where the wheels sank into the soil, it was sometimes impossible to raise the rear high enough for ground clearance and turning then became a struggle.

Aside from this one difficulty, however, I was very favorably impressed by this machine.  The construction seemed solid with heavy-gauge metal throughout and Troy-Bilt includes a lifetime warranty of the transmission.