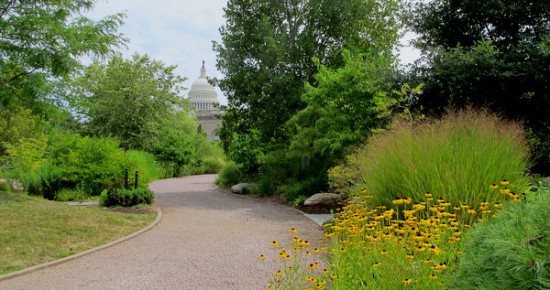 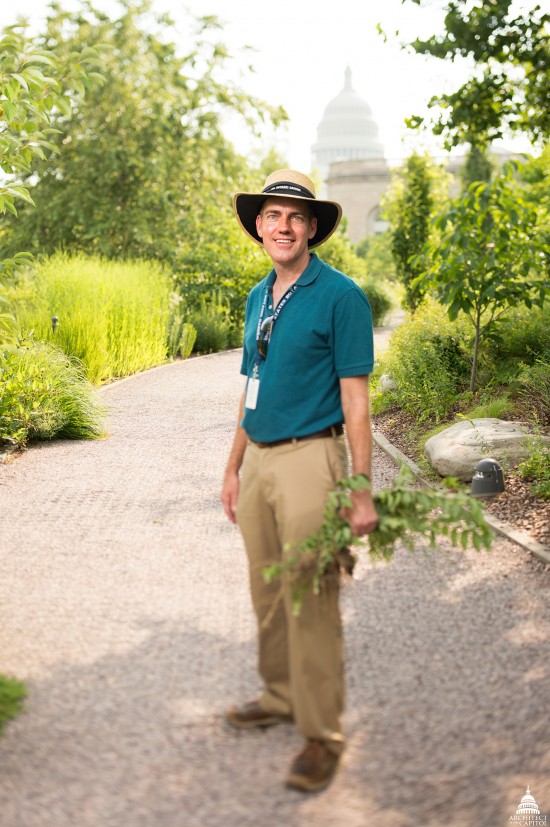 As a regular visitor to the U.S. Botanic Garden, I’ve come to love its spacious Regional Garden very gradually since installation was completed in the fall of 2006.

Now in its eight year it’s stunning, and has lots to teach us about the two regional soil zones it uses – the Coastal Plain and the Piedmont, both in the Mid-Atlantic region but on opposite sides of a fault line. Plant curator Bill McLaughlin can’t stress enough that the soils are are very different, and needed to be installed to 30″ before planting.  The paths are used to separate the different soil media.

Bill writes that “One glaring example of this difference is that we have bald cypress in the loamy ‘Piedmont’ soil because it will prosper in that better than in the lean sandy soil from the Coastal Plain. Though the species exists physically in the Coastal Plain on the East Coast, it grows in mineral soils brought by rivers and deposited in the CP.  It’s really a ‘right plant, right place’ garden!”

He describes the garden as verdant and ever-changing, with a spectacular display of fall foliage seen only in the Eastern parts of North America and Asia.

At the perimeter of the Regional Garden, along the city streets, there are plants from somewhere in North America but not necessarily the Mid-Atlantic, “to show the wealth of North American flora, and to instill pride in it.”

How the Garden and Public Reactions have Evolved

Bill’s original vision for managing the garden was that it would be a tidy garden, but in practice it’s evolved to be a balance between tidiness and wildness.  And turns out, he’s been pleased and surprised by the public’s “unexpected acceptance of a garden that is a bit untamed and natural looking.” 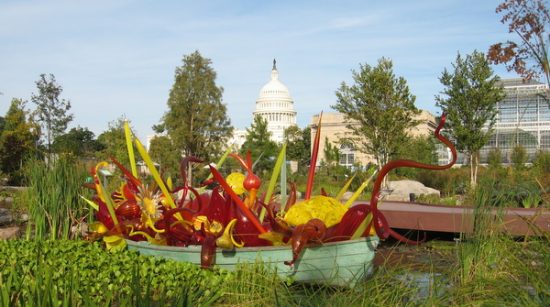 Though criticisms have certainly been voices, especially during the garden’s first year, with some calling it barren, and the large Chihuly piece intended to enliven the admittedly bare-looking garden was controversial, too. But Bill says that by the end of the season, when the wetland plants grew up around the glass sculpture, it became more accepted.

Bill recalls, “We used to joke that ‘brown was the new green’ the first few seasons! Now it’s all about editing and refinement. It has been really heartening to hear visitors the past few years saying how much they love this garden. Local gardeners check out the plants they can have at home, and foreign visitors seem really happy to see a garden that has the plants ‘from here’ instead of the typical bulbs and annuals based municipal garden look.”

Find out which plants are best in gardens – because some of these can be overly aggressive.  Like?  Wetland carexes.  A better one for gardens is Morning Star Sedge. “We are trying to emphasize the garden-worthy among our native species. and have had to remove aggressive species that would be great for restorative plantings.”

It’s been challenging at times. “Some of the species we are using haven’t been used much at all in gardens, so figuring out the best placement in the garden took research. I looked at overall distribution, federal wetland status, soil maps, et cetera to gauge the plant placement in the garden. A lot of the information I needed back in the 1990s when specifying the plant lists for the garden are now being nicely consolidated at websites like Natureserve and USDA Plants.”

But the good news is that unlike exotics, the native habitats of which we may not know much about, with regional natives you can find out it they’re dryland or wetland, and other important details, like which native plants can tolerate drought and which can’t. Bill has seen plenty of Ilex glabra planted in dry spots, despite its being a wetland plant.  Itea is another that’s often planted in the wrong place.  “A lot of natives are trotted out as being able to handle any soil type, any exposure, or any watering regimen simply because they are from the area. Some are pretty amazingly adaptable, but remember that Cypripedium acaule [Pink Lady Slipper] is native, and pretty much impossible to cultivate! ” 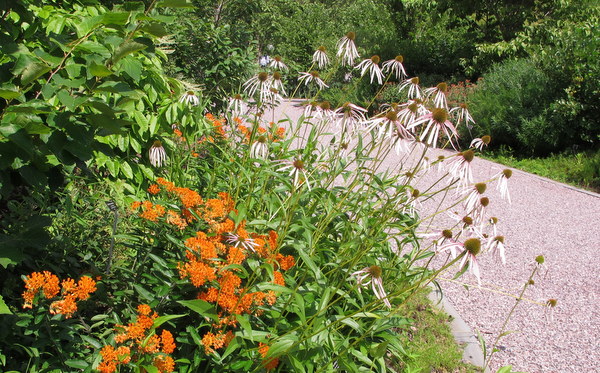 Mythbuster alert! Everyone may think that Echinacea purpurea is native to this part of the world, but it’s not.  (E. purpurea is from wetter habitats in the Midwest, which is why it adapted so well to mulched, watered, and tended gardens.) The one coneflower species that is native here is the Smooth Coneflower, Echinacea laevigata, which is so endangered, it’s no longer found in Pennsylvania or Maryland. Thankfully, the USBG is safeguarding the germplasm.  Bill says, “We are delighted to show people big swaths of them, even in this case knowing that they are not widely available commercially. Hopefully people are inspired to save land and habitats near where they live. We have all manner of coneflower species and hybrids on our grounds, but in the Regional Garden this level of species-driven detail is important and yields distinction. “

I asked if they could provide the germplasm to growers so they’d be available to us gardeners but no, that’s not how government works, at least the federal government.  They can provide plant materials to universities, and other gardens but not to commercial growers.

Starting Small.  Another lesson the garden can teach is the importance of planting trees when they’re small.  The small ones have thrived, while some larger trees have perished, no thanks to the late soil delivery that required the trees to be heeled-in and then moved in mid-summer.  Says Bill, “Horticulturally, we try to promote planting smaller trees; they nearly always catch up, and even surpass the larger ones in a few years. ”

He’s happy to report that there are plenty of trees in the garden, and they have enough room to become specimens.

Bill’s design tip: To create the look of a garden, plant in naturalistic drifts, paying attention to wet and dry areas, and you’ll have a great garden. “We took plants from their respective soil types, then ran drifts of them along the elevation lines of the garden. The highest areas are populated with dry growing species, and the areas along the stream use facultative wetland species. In between are the mesic species. It just makes sense, and Mother Nature makes some pretty amazing plant combinations!”

Finally, I asked about spring color because in my photos, the garden looks pretty spare in April and May.  Bill had to fill me in about all the spring beauties I hadn’t captured in my shots: columbine (C. canadensis), green-and-gold (Chrysogonum virginianum) and sticky catchfly (Silene caroliniana) in addition to dogwoods, redbuds and sassafras. “The regional garden is more sparse in early spring because we have relatively little shade canopy as yet; that will come in time. As the garden ages we will have increasing numbers of spring ephemerals such as spring beauty, Virginia bluebells, trout lilies, bloodroot, Dutchman’s breeches, etc.

“For the native plant purist, my favorite recommendation is the sun-loving and drought tolerant trailing phlox (Phlox nivalis). It can throw flowers even in fall and winter, and is truly an early spring powerhouse.  I’m not a 100% native plant gardener at home, so I plant species tulips and daffodils for great contrast and compliment to the phlox.”

The USBG’s Conservation and Sustainability Horticulturist Ray Mims has tips for spring color, too, starting with Iris cristata as a complement to Chrysogonum virginianum.  He also loves early blooming shrubs like Daphnes, Witchhazels, corylopysis, and edgeworthia.

More Gardens at the USBG 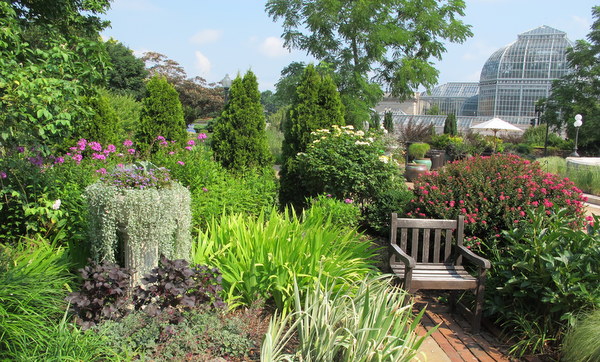 As fabulous as the Regional Garden is, Bill won’t let me forget to mention the other gardens available to the visitor, like the Rose Garden (without spraying!), Bartholdi Park (a local fave) and inside the Conservatory itself.  Click here to see all the outdoor gardens at the U.S. Botanic Garden from April through November.