Swarthmore: One of the Most Beautiful Campuses in America

I first visited and fell in love with the Scott Arboretum, covering the entire campus of Swarthmore College, back in 2008 when I visited for a talk on lawn alternatives.  I finally made a return visit last month when I attended its annual Perennial Plant Conference, where some of the top names in the plant world were speaking, including Rant’s own Allen Bush and local-to-me landscape designer Thomas Rainer.

Swathmore’s campus has been named among the most beautiful in the U.S. by Forbes, Travel and Leisure, and surely others. Follow their blog for Plants of the Week and other goodies.

Here are some of my early-morning photos of the campus.  F0r better photos taken on the same day, go to A Tidewater Gardener’s blog post about it.  (I know my limits.) 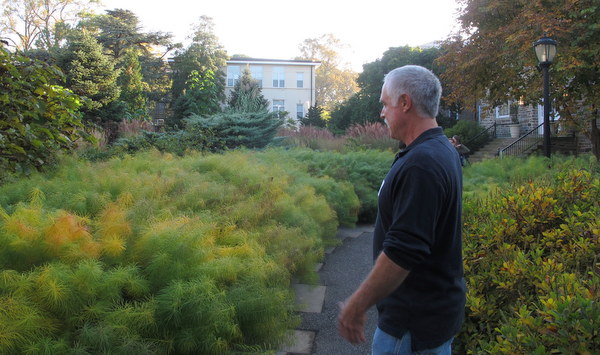 Horticulturist Chuck Hinkle took us on a tour, stopping at an iconic spot on campus – a path lined with Amsonia hubrichtii. just turning orange.  I can’t resist showing you how it looked on my last visit, in November, seen below. 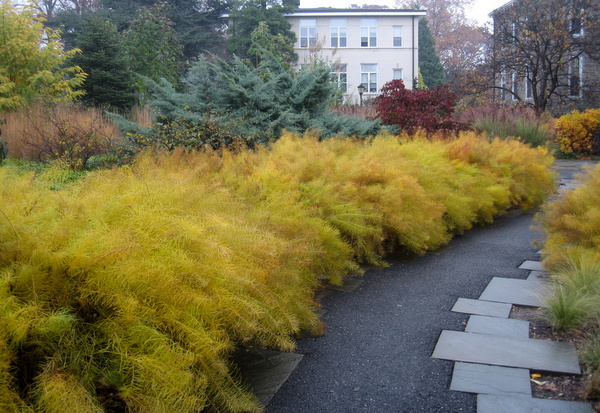 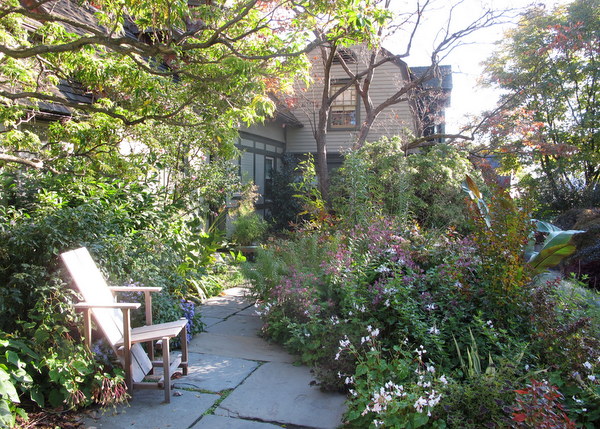 Above and below, around the Arboretum offices. 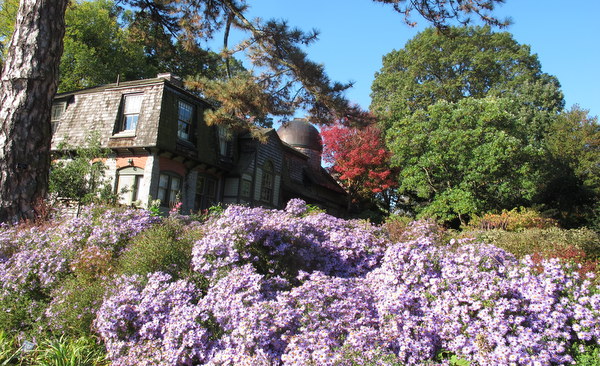 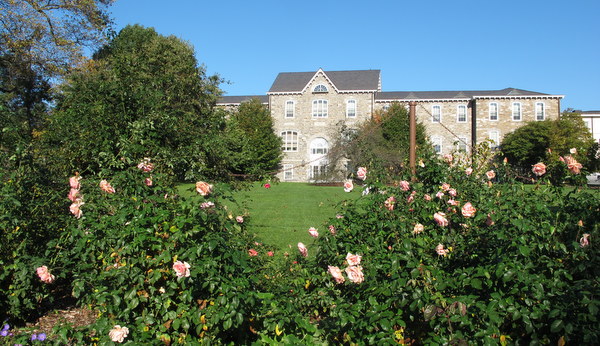 Roses were still blooming in mid-October. 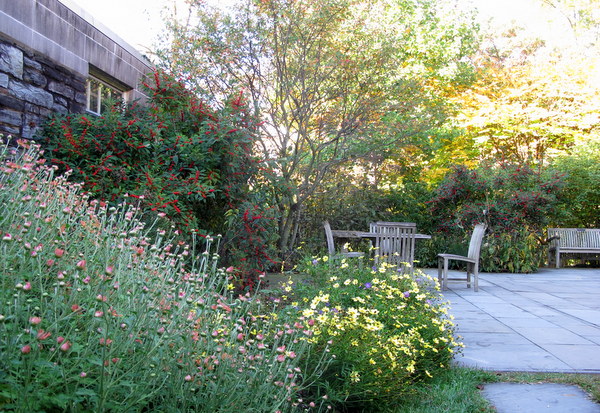 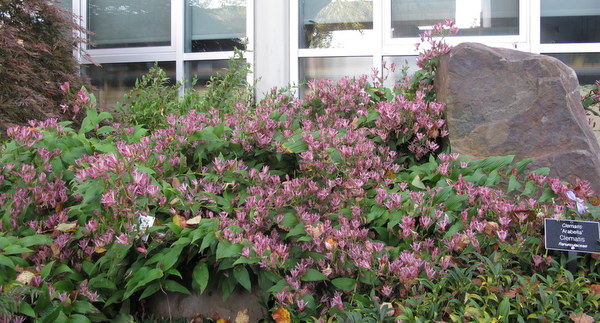 Above, I think these are  Toad Lilies.  Thanks for the correction. 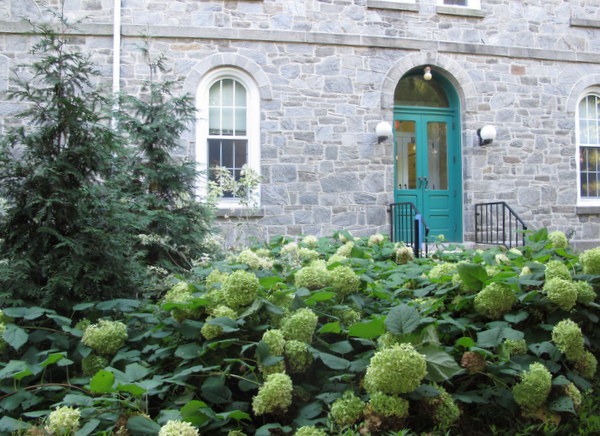 Above, the best-known spot on campus is the Amphitheater, where graduation ceremonies are held.  On this day the steps were covered with perennial plant geeks at lunchtime, including Allen and me.  I wanted to ask someone to take a photo of us there but before I could do that Allen had left to prep for his talk.

Speaking of photos of people at the conference, I saw no one taking any and could hardly believe my eyes.  I’m used to gardenblogger and garden writer events, where we’re constantly using our cameras and smart phones to record the event, and selfies and social-media updates abound. Here, among plant people, I stuck to the prevailing culture of meeting&greeting old school, and the only person I photographed was Chuck, who was, after all, giving us a tour, and I wasn’t the only one taking photos – of plants, I imagine.

One very cool feature that’s new on campus is a site-specific sculpture by artist Stacy Levy. Quoting an announcement about it: “Evoking the variable flow of water across our landscape, the 300-foot serpentine form of Crum Creek Meander will be illuminated at night and animated by changing wind patterns.” Reminds me of Christo’s The Gates, in a good way.

Oh, and the huge and gorgeous lawn seen here is promoted as being managed organically. 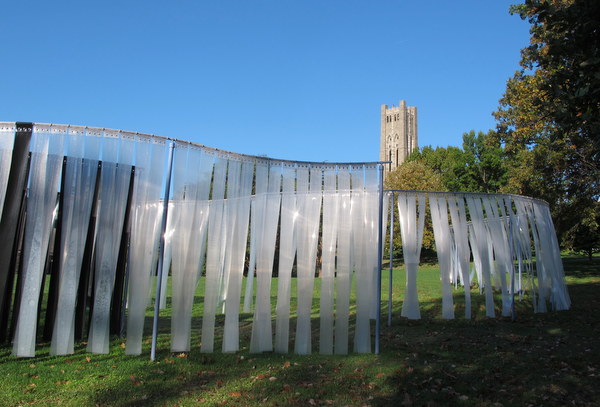 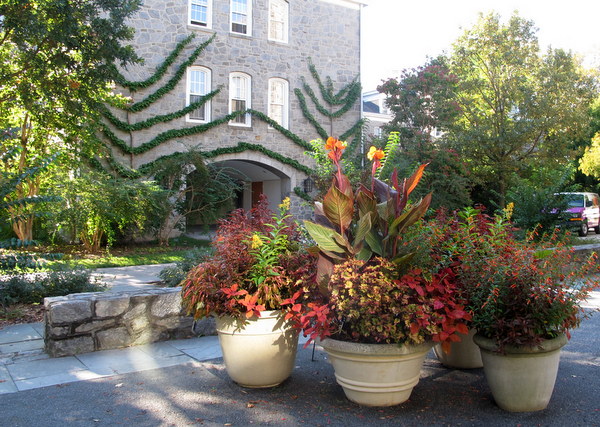 Above and below, views in the same courtyard.  Good grief, do the students appreciate what they walk through every day? 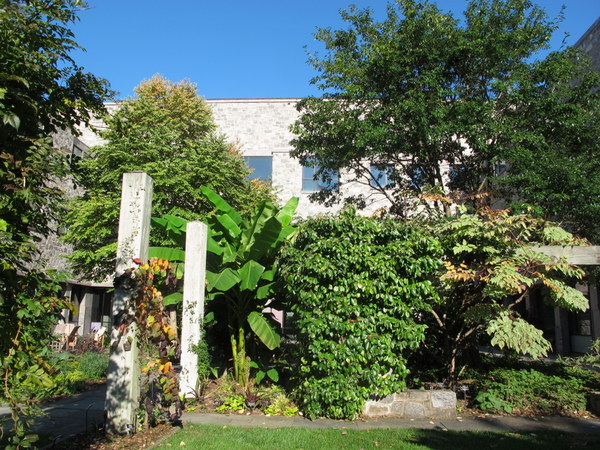 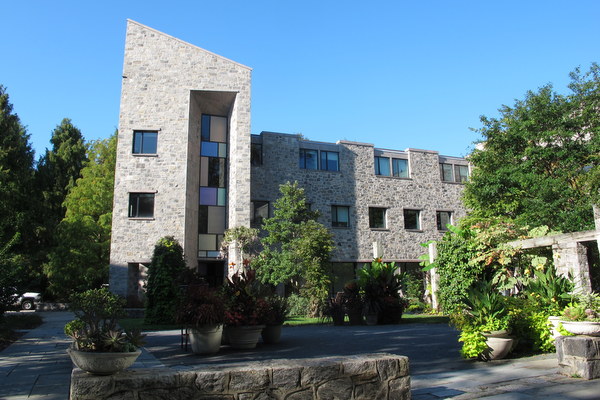 In a longer view of the same courtyard you can see how Swarthmore has incorporated the same material – that gorgeous stone – into contemporary buildings.

Next, I’ll have an update on the lawn alternatives being used in the Scott Arboretum.  Lots of Carexes, and Prairie Dropseed, too!