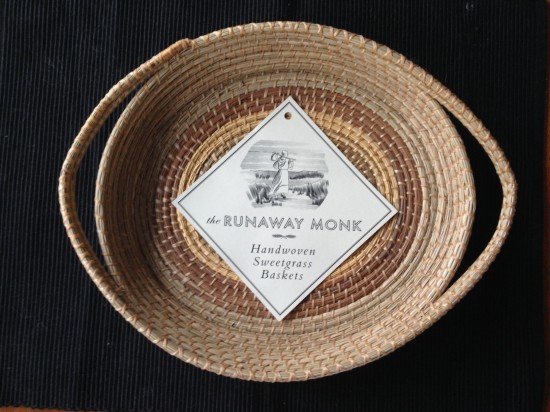 A memorial service was held for Joshua Brands on a cold, drizzly Friday morning in late November. Julie Breeding, Ken Eberhart, and I drove from Louisville to Bardstown, past the mottled sycamores along Cox’s Creek, and across the rolling countryside speckled with green cedars.

Josh, a talented archivist, artist and gardener, was once a Trappist monk at the nearby Abbey of Gethsemani.

Josh’s little garden-in-exile, in Bardstown, not far from Gethsemani, was tucked around his putty-colored craftsman-style bungalow. The red gate, covered with a bare, sinewy wisteria vine, welcomed us on his memorial day. A few annual blue salvias and a stray white verbena were still in bloom, dodging winter just around the corner. The oak leaf hydrangeas had lingering red-purple fall foliage. The Runaway Monk had style. Good God, did he have style. 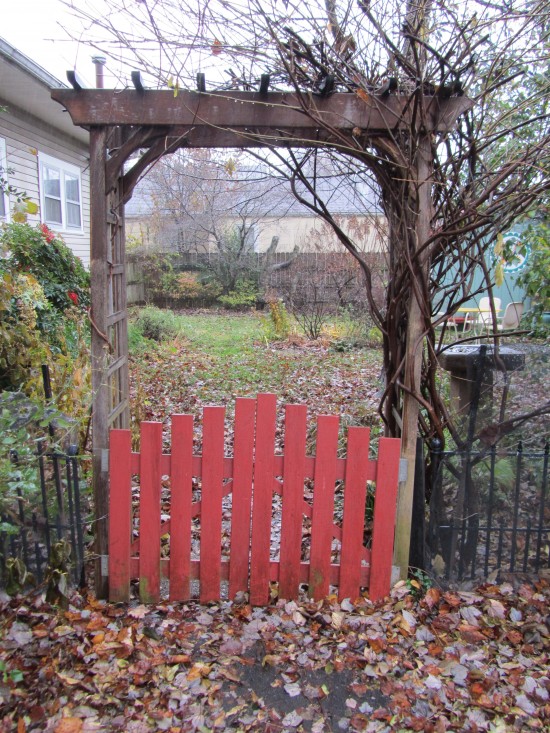 Josh had developed a good eye for unusual plants, too. There were two unfamiliar upright evergreen hollies planted on opposite corners of the front of his house. I took a few photos and cuttings to help with identification. I asked plantsman (and landscape architect) John Swintosky to take a look. John is the current President of the American Holly Society. He passed clues around to a few other holly devotees. When the votes were tallied (well, three votes), it was decided, with some probability, that the male holly was Ilex colchica; the red-berried female was Ilex ciliospinosa.

I was enchanted with Josh’s hollies. I often go soft for plants that might have sentimental value. So, when I got home, I stuck cuttings in quart pots and placed them in a sunny window of our cool garage. There’s a slim chance that they’ll root from hardwood cuttings, but it was worth a shot. I sowed the berries, too. The seedlings could produce progeny with characteristics similar to Josh’s two holly species. 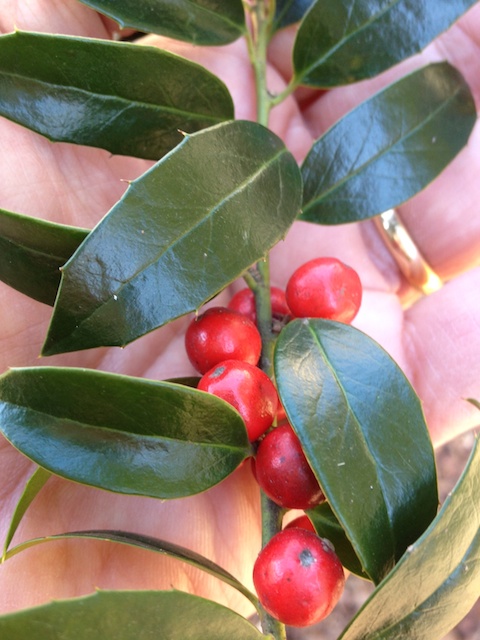 I first met Josh when I tagged along with Julie on a visit to the Abbey in mid-May, 1998. She was going down to arrange a few photographs for Dianne Aprile’s book project: The Abbey of Gethsemani: Place of Peace and Paradox (150 Years in the Life of America’s Oldest Trappist Monastery). Julie was the talented graphic artist, and Ken Eberhart’s Merrick Printing published the book. Julie is an excellent gardener, too. She becomes nearly giddy when she spots a new flower. 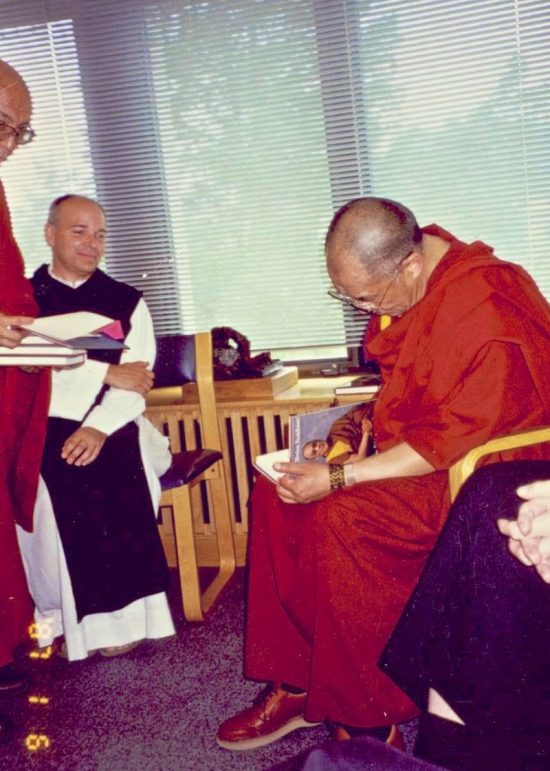 Josh, at the time, was Gethsemani’s archivist and the abbey’s third superior.  He conceived the book idea that would commemorate Gethsemani’s 150th anniversary. And he served as the Abbey’s liaison for the book’s publication.

We met at Thomas Merton’s former hermitage—a simple, block building, painted white, set back in the woods a few hundred yards from the monastery. Josh put together a spread with sandwiches and cold beer. (Merton would have enjoyed the picnic. It was common courtesy to take along some beer and whiskey, if you were going to visit the world’s most renowned Trappist.)

A year later, Josh moved to his own retreat. Josh was a vital piece of the Abbey’s day-to-day business operations. The move to separate quarters, apart from health reasons, was a privilege rarely granted.

Josh invited Julie and me to help plant a little garden at the studio that originally had been designed by the artist-monk, Brother Lavrans. Josh lived in the simple living quarters on one side. The other half was intended to be Lavran’s art studio, though Lavrans never lived there. Between the studio and residence was a bare, cloistered courtyard, about 15 square feet.

A year later a new Abbot was appointed to lead the Abbey. Father Damien started making changes. Josh’s business role required that he travel periodically to Louisville. He made the rounds. And he loved Porcini’s. The Frankfort Avenue restaurant stocked Grey Goose vodka; it made doing business so much more festive.

By this point, Josh was no longer regularly going to church. Some of this had to do with poor health.  Certain monks saw it otherwise. They started fussing about Josh.

Father Damien put his foot down. The Abbot stripped Josh of his archival responsibilities and duties as cellarer. Josh was told he was being demoted to the kitchen, but he would not stand for that. He left Gethsemani and his new garden.

I didn’t hear from Josh again until he “friended” me on Facebook last summer. We messaged one another, and this was when I learned that Josh’s health had deteriorated.

Julie Breeding, however, had kept in touch with him over the years. The Runaway Monk got a severance package from Gethsemani. He tried culinary school but cooking professionally didn’t suit him. He left Kentucky and returned briefly to his native New Jersey and worked in the family’s jewelry business before returning to Bardstown. He eventually got a job again as the county’s archivist.

Josh began his new garden and started weaving and selling coiled sweetgrass baskets, a craft that was brought by slaves from West Africa to the South Carolina low country in the late 17th Century. (Julie Breeding designed the logo and tag.)  Sewing baskets with lemongrass, seagrass, bulrush, and the needles from long leaf pine was said to be, “a gift from God.” 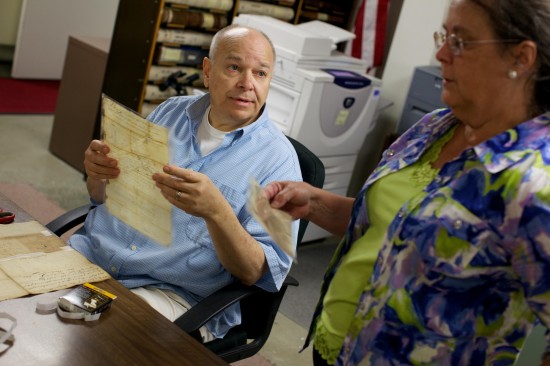 Bardstown’s Basilica of St. Joseph Proto-Cathedral was the first Catholic cathedral west of the Alleghenies. One hundred and fifty people showed up for Josh’s memorial mass. The Nelson County Clerk’s office was closed so that Josh’s colleagues could attend. His workers adored his joy and humor.

Following hymns, readings, and a homily, the priest welcomed Catholic parishioners to come forward for the Holy Eucharist. Julie, a self-described heathen, asked me, a card-carrying Episcopalian, if it was all right to take the Catholic Eucharist before the Altare Privilegiatum (The Privileged Altar). “Sure, come on.” When we arrived, Julie was unsure of the two-step sacrament. When she received the wafer, she asked, “Which way do I go for the wine?” The priest caught us! “You’re not Catholic?” We were turned away at the Privileged Altar.