I recently ventured to Virginia to a place I’d never been before – the Pentagon Memorial to the victims of the 9/11 terrorist attack.  Its design by two young architects had been selected in a heated international competition by a group that included family members of the victims, as well as design professionals, and it’s a complicated one: a grove of trees and “memorial units” composed of a glowing light pool and bench-like marker inscribed with the name a victim, arranged in the order of the victims’ ages and along the flight path the plane took into the building.  The units for the 59 victims aboard the hijacked plane face one way, and units for the 125 inside the Pentagon face the opposite direction.

I’d seen plans and mock-ups presented by the designers and heard the agency that would have to maintain the Memorial protest that it would be an impossible task, due to the design’s 184 separate pools of running water beneath deciduous trees (originally paperbark maples) and surrounded by gravel.  Others objected on various grounds but the design-pickers won out, and the Memorial opened in 2009.  I decided to wait for the plants to grow a bit before visiting, and also to time my visit with prime fall color, giving the Memorial its best chance to win me over.

So on a sunny weekday with almost no other visitors around, I found the Memorial to be moving and lovely, overcoming its challenging site between a noisy 8-lane highway and the gargantuan Pentagon itself. 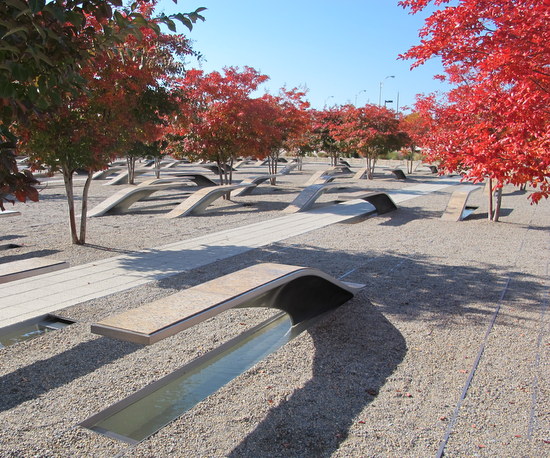 Here are some of the memorial benches over reflecting pools of moving water, a design feature that went a long way toward drowning out highway and airport traffic.  But see all that gravel right up against the edge?  No wonder lots of it ends up IN the pools. 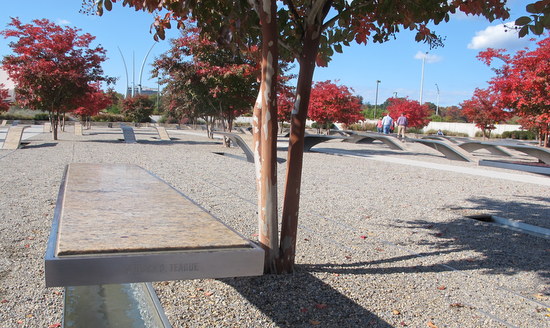 You can see a bit of a victim’s name incised at the edge of the bench.  In the background you can see the spires of the new Air Force Memorial by James Freed. 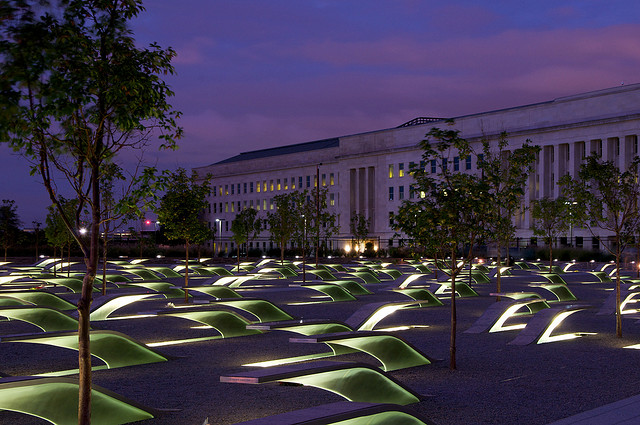 I didn’t take this photo (credit), but it sure makes me want to visit at night sometime.  Here are lots more night images, conveying the magical or even surreal nature of the space. 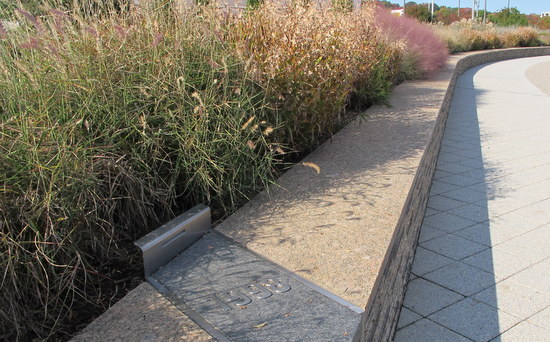 Above you see part of the wall along the edge of the Memorial that begins at a height of 3 inches and rises to a height of 71 inches, corresponding to the ages of the youngest and oldest victim of the attack.  Inscribed in the top of the wall are dates that indicate the time lines from which individual benches are arrayed, according to the year of birth of each victim.  (See what I mean by complicated?)

I love the repeating masses of grasses along the wall, including sea oats, Miscanthus, Pink Muhly grass and others I couldn’t identify.

Close-up of the Pink Muhly grass with crape myrtles and Pentagon in the background. 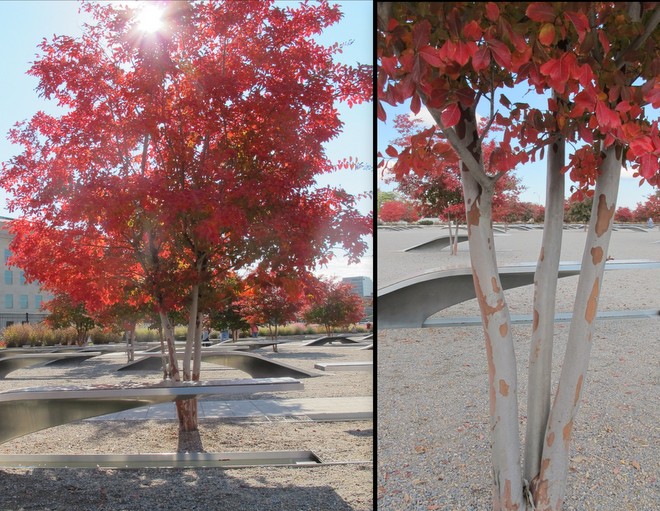 These ‘Natchez’ crapemyrtles do look fabulous, especially in their fall color.  I may have to go back in the summer just to see them in bloom.  They replaced the original papermark maples, which quickly expired on the hot site.  According to this source, “the trees will grow up to 30 feet to provide a canopy of shade over the Memorial for years to come.” 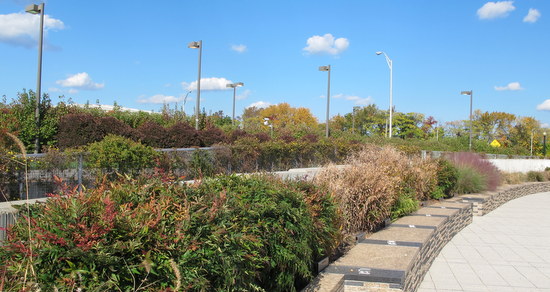 The other plants (chosen by a local landscape architecture firm) are doing well.  Perennials selected are all drought-tolerant and sun-loving for this blistering site.  They include goldenrod, sedum, black-eyed susan, coneflower, yarrow, heuchera, geranium and the aforementioned grasses.  Trees and shrubs include arborvitae, winterberry holly and oakleaf hydrangea, in addition to the crapemyrtles and nandinas. 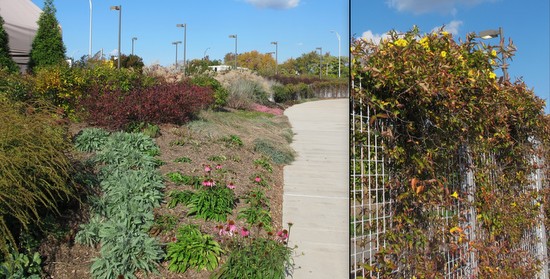 Naysaying
All memorials in D.C. have their detractors, and this one just outside the city is no exception.  But when the event being memorialized is recent and emotionally charged, as in this situation, criticism is generally sotto voce, or at least not for publication.  I did find one outspoken critic:

The Pentagon 9/11 memorial…is a set of ugly modernist “seats”, one for each employee killed, on a gravel-covered pad that looks overall like an industrial installation. It is utterly cold… How about soft green lawns and planted trees and flowers instead of these ghoulish “chairs” and “seats” and grey gravel lots? Wouldn’t that have been more life-affirming? Of course it would have. But not to today’s “artists” and “designers”. These people are all unimaginative, uncreative people who want to imprint negativity on us with their meager talents.

I can see his point, and memorial design is always controversial (other recent examples include the Martin Luther King and Eisenhower Memorials).  But if the families and friends of the victims love this Memorial, then I suppose it’s a success.  It’s certainly worth a visit, and thanks to the nearby Metro stop, it’s a surprisingly easy thing to do.