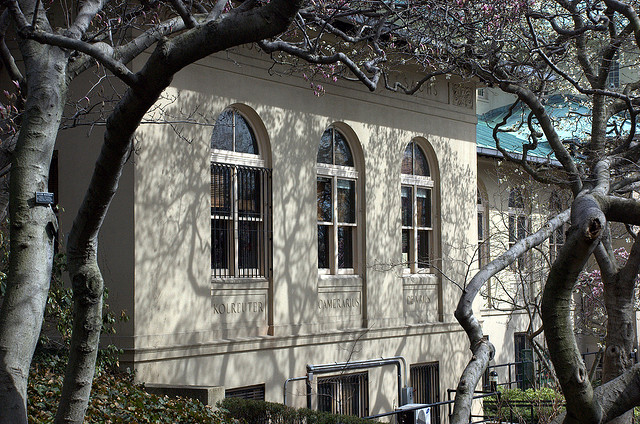 Names venerating 73 botanists are inscribed in the frieze and below the windows of BBG’s landmarked Laboratory Admin building, built from 1912 to 1917. Photo by Chris Kreussling (Flatbush Gardener)

Guest Rant by Chris Kreussling, who blogs as Flatbush Gardener

On Wednesday, August 21, 2013, at the direction of President Scot Medbury, Vice Presidents of the Brooklyn Botanic Garden (BBG) notified four staff that they had been fired. The administration also chose to shutter and relocate the 330,000 specimen herbarium, cited in botanical literature as BKL, and suspend all field work.

Among those eliminated were the Curator of the Herbarium, the Herbarium Supervisor, and Manager of the New York Metropolitan Flora Project (NYMF). The sole remaining researcher – the Director of Science – exists only on paper; she is on sabbatical for at least a year with a National Science Foundation grant. One Herbarium Technician and one part-time Herbarium Assistant were transferred to the Horticulture Department. There is no longer a Science department at BBG.

These actions halted not only BBG staff’s research. Researchers that had active collaborations with scientists at BBG suddenly found themselves unable to speak with their colleagues, or even access their own contributions to BKL. BBG terminated, without notice, programs and collaborations with government, education, and non-profit institutions throughout New York and New Jersey.

BBG was founded just over a century ago “For the advancement of botany and the service of the city.” Their Annual Report for 2005 listed 7 Ph.D.s among the 12 staff of their Science Department. Ivan Oransky visited and wrote about their work in the April 2005 The Scientist:

“Most people go to the forests to study plants,” says vice president for science Steven Clemants, who was hired to work on local flora and has now been at the Garden for 16 years. “We take advantage of the area to try to understand the impact of the urban environment on flora.”

In August 2005, BBG announced that Scot Medbury would replace Judith Zuk as President in October 2005. He was brought in based on a $25 million capital project at the San Francisco Conservatory of Flowers.  Said Earl D. Weiner, chairman of the board: “We are confident he will provide exceptional leadership as the Garden implements the many exciting projects in our Master Plan for the 21st Century, while carrying out the education and research programs needed to address botanical, conservation, and preservation issues affecting our diverse local community and our broader national and international audience.”

In hindsight, the press release foreshadowed the devastation to come. Medbury was brought in for his ability to raise mega-bucks for capital projects, not for any love of nor facility with science and research. The secondary clause in the chairman’s statement – “while …” – demonstrates division among members of the larger board.

Within two years, Medbury began dismantling BBG’s science and research programs. In 2007, he moved Publications from Science to Marketing, in service to the corporate message. Shortly thereafter, he eliminated Dr. Clemants’ position of Vice President of Science, demoting both that senior researcher and the prominence of science itself in the organization.

The last time anyone was hired to fill a vacated position in science was in 2006. Since then, every vacated position has been left unfilled. Through a process of attrition by layoffs, resignations, and even a death, Medbury allowed BBG’s science and research department to erode from 12 in 2005, at the start of his tenure, down to 5 as of 2012.

Finally, this August, he fired 3 of those remaining 5. He timed the firings for the Director of Science’s last week before she left on sabbatical, leaving just one full-time and one part-time staff behind to close up the herbarium.

While all this has been going on, BBG has raised $90 million of their $100 million “Campaign for the 21st Century.” There’s nothing wrong with raising capital. The problem is that BBG chose to chase that money at the expense of their mission.

In their attempts to counter opposition, BBG harps on issues with the science building, which also houses the herbarium. They even led a NY Times reporter on a field trip to the building so they could see the cracks themselves and get photos of it:

The state of the one-story building was at the heart of the botanic garden’s decision last month to suspend its scientific research program and lay off three of the program’s employees, Mr. Medbury said.

Those who have worked in the building say the problems have been known for a decade. The scientists, and their research, don’t need that particular building as much as BBG needs scientists. They could have been relocated. Medbury chose to dismiss them instead. The priorities are flipped: the real estate is valued while the scientists are devalued.

Medbury’s “Message from the President” – linked from BBG’s home page and emailed to all members – reads, in part: “While we build a new facility and re-envision the goals for scientific research at BBG …” This promises there will be no science unless and until BBG can make a killing in Brooklyn real estate. If that coupling is allowed to stand, it will be years before science and research return to BBG, and a decade before it recovers, if it ever does.

BBG continues to spin the story as a triumph for science. They changed their home page lede for Medbury’s “Message from the President” to “Plant science is a fundamental part of Brooklyn Botanic Garden’s mission.” A week after the firings BBG issued their first public press release, and published it in the Pressroom area of their Web site: Brooklyn Botanic Garden Announces Suspension of Research Program. A week after that, in a maneuver worthy of Minitrue, they published a different release – BBG Announces Plan to Reenvision Research Program – and removed the first release from their Web site.

It’s all doublespeak. They’ve had eight years to “re-envision” their science and research program. The result is that they’ve extinguished it. They could only do worse by burning the herbarium and hunting down botanists in the street. I shudder to imagine what the next eight years of re-envisioning will bring.

The administration is acting like a logger who, having clearcut the forest over the course of a decade, insists they have always been dedicated to conservation. They’ve betrayed their mission, and the public trust. The onus is now on them – through lasting action, not more assurances and promises of plans – to earn back that trust.

Within a week after this last round of firings, a group of us began work on crafting a petition – Restore Science to the Brooklyn Botanic Garden on Change.org – calling on BBG’s Board of Trustees to:

If you’ve read this far, thank you. We hope that you will take a look at the petition and read the comments of those who have signed. And, if you’re so inspired, sign, comment, share, and forward. It’s not over yet; your support matters.