I’m a Fan of Bantam Hens 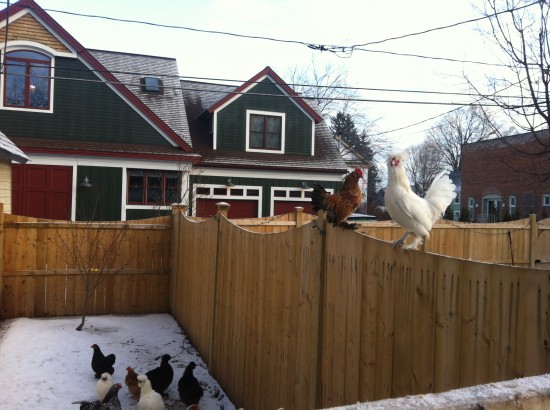 It was the girls who chose the fancy bantams from the McMurray’s catalog.  They are an assortment, Silkies with fur apres-ski hats, fat little Cochins in black, brown and barred, and one tiny little Mille Fleur hen who looks as if she belongs in a birdcage, not a barnyard.

We ordered the day-old chicks last fall, something I’ve never done before, in order to break two hens of extreme broodiness that had lasted all summer and made me fear for their health.  The hens just refused to get off the nest, even to eat or drink, absolutely determined to hatch out unfertilized eggs that would turn to stone before they produced a chick.

In the past, I’d solved the problem of insane broodiness by getting fertile eggs from a friend out in the country who has roosters.  This is also the easiest possible way to add to a flock.  Skip the brooder and the lights and the awkward introduction of teenagers to territorial grown-ups.  Just let the adult hens do the child-rearing. But my friend and I failed to connect, and I twice ordered fertile eggs by mail, expensive duds. So my kids and I decided to try day-old chicks.

Initially, the bantams appeared to be a disaster.  At the post office, when I went to pick up my 26 chicks, I was astonished to be handed a box the size of a grapefruit.

They were ridiculously tiny and fragile.  One was dead in the box and another soon after.  I did successfully palm each little chick in turn and place it carefully under the hot underside of a broody hen, grabbing an egg on the way out.  There was barely a ruffle from the adoptive mothers.  “Mother hen” became a cliche for a reason.

All was well until the chicks decided two days later that it was time to head outdoors.  I’d been trying to keep them in the coop by putting a screen over the opening to the chicken yard.  The chicks were so minuscule yet determined, that they wound up wedging themselves between the screen and the wall, chirping pitifully, their adoptive mothers pacing angrily.  And some managed to escape anyway, flinging themselves down three feet into the yard.

I gave up, made a ramp for them, and let them out.  The problem was, they were too little and weak to use the ramp at night, so for weeks, I was out at dusk with a fishing net, catching panicky little chicks to put them to bed while their enraged mothers tried to attack me.

Eventually, most of them learned how to use the ramp.  But I began to question bantam intelligence.  There were at least 8 or 9 underachievers who could simply not solve the problem for weeks after the rest of their classmates figured it out.

There were losses along the way.  One chick was stepped on during the evening commute.  A owl spotted in a tall Norway spruce helped himself to several.  And a full 9 turned out to be roosters.  The roosters were so handsome.  They were barely a foot tall, yet had all the attitude and lung power of Foghorn Leghorn.  I love rooster music, but my city neighbors started developing bags under their eyes and eyeing me murderously, so I took the roosters to a farmer in the country, who “processed” them.

Now, however, I have ten lovely bantam hens happily coexisting with my five old large hens. And I have decided that the bantams are great city chickens.  A whole bunch of them will comfortably share a limited space. And contrary to their reputation as only so-so egg layers, I am getting a lot of eggs every day.  Even the size of the eggs is impressive, given the hens’ size.  Smaller than a normal egg, but proportionately large.

And I think the flavor of the bantam eggs is better, richer, sweeter. Possibly, however, I am influenced by the aesthetics here.  Pretty.