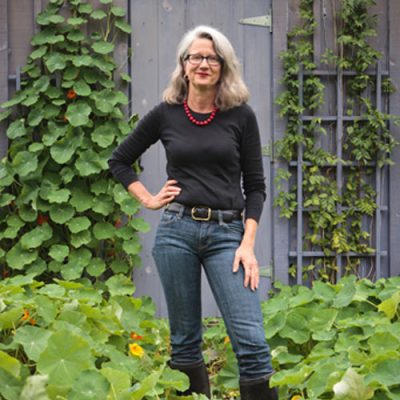 I’m a Fan of Bantam Hens

Tiny roosters watching over tiny hens I like having bantam hens for the same reason that I like having girl children: pretty. A joy to watch. It was [...]

Henry, Off the Leash

I've had Henry, a big handsome alpha dog, for the last two years. People say he's badly trained. I'm not sure. Like the other members of my household, Henry definitely [...]

The one real contribution I hope to make to the literature of vegetable gardening is my total shamelessness. I've been growing so much food for so long that failures of [...]

For Kids to Eat Them, Vegetables Should Taste Good!

The New York Times ran a piece this week about the results of federal legislation mandating healthier school lunches beginning this year. Because of puritanical restrictions on fat and salt, [...]

A Barren Year for my Hens

More successful in 2010 I've had hens for 5 or 6 years now, and don't plan on ever living without them again. They're fluffy and pretty. Their scratch-and-peck [...]

For your health, grow food, then eat It!

Heavy for a gardener, but not for a 52 year-old American Friend of Rant Christopher C of Outside Clyde is the rare exception that proves the rule: He grows [...]

George Ball and Heronswood on a Story that Ends Well

Heronswood, the revered botanical garden created in Kingston, Washington by plant collector Dan Hinkley and his partner, architect Robert Jones, as an adjunct to the nursery they founded in 1987, [...]

It's a fair bet that I own my last Victorian house.  Never again.  In future, I intend to suffer only over pieces of architecture worth suffering over.  Some people are [...]

With a new trellis, I guess I live here

I have a really brilliant and beautiful friend in Saratoga Springs, an English professor at Skidmore College, who said the greatest thing about second homes after her own attempt to [...]

It's been many years since I paid any attention to White Flower Farm.  I used to order a bareroot rose or shrub from them now and then.  Early in my [...]

Meet David W. Wolfe, Cornell plant scientist and expert on the impacts of climate change on agriculture. Wolfe is also the author of an absolutely delightful book about the soil, Tales [...]