The memorial to FDR has been a local favorite since it opened in 1997, and yesterday it was the first stop on my cherry blossom tour via bicycle.  (You can get your own bike there via subway or rent one when you get downtown.)  But like thousands of other tourists, I was sorry to see no cherries blooming at all, thanks to our super-cool spring and the perennial unreliability of cherry tree blooms.

But guess what.  The lack of blooms focused my eyes and camera on something else – the humans, of which there were plenty, though thankfully not the hoards that will be there this weekend. 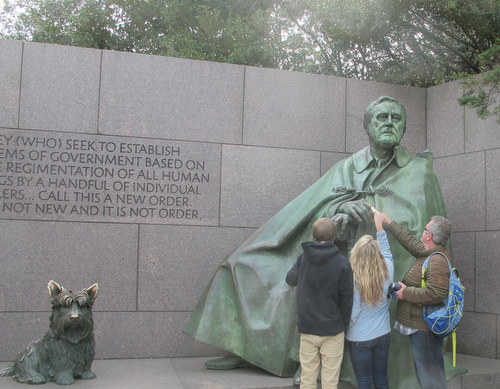 What struck me at the FDR was first, how beautiful it is every day of the year, and how much it engages the visitor, as evidenced by these snapshots.   (Above, notice that FDR’s finger and the dog’s ears are rubbed golden by admirers.)  It’s all thanks to the brilliant design by landscape architect Lawrence Halprin, considered one of the world’s best.  (I love this article from the ASLA about how the memorial came to be.) 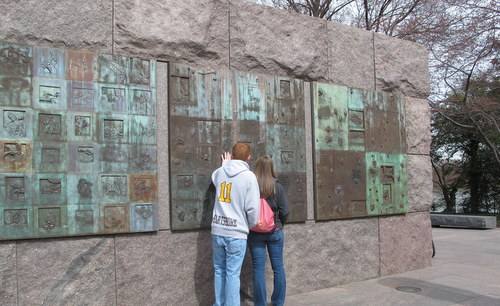 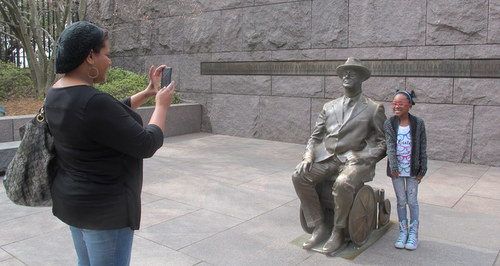 Life-size statues are great for photos, especially this wonderful, controversial one of FDR in a wheel chair.  It was added years after the memorial opened after pressure from disability rights groups.  (Celebrity tidbit: Actress Angelica Huston was sighted at review meetings for this statue, made by her late husband Robert Graham.) 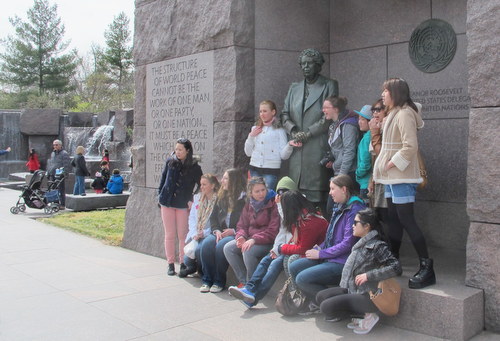 Including the image of a spouse is a unique feature to this memorial and it’s proven to be popular, too.  Here, girls from a visiting school group joined Eleanor for a nice memory.  I do wish she didn’t look so glum. 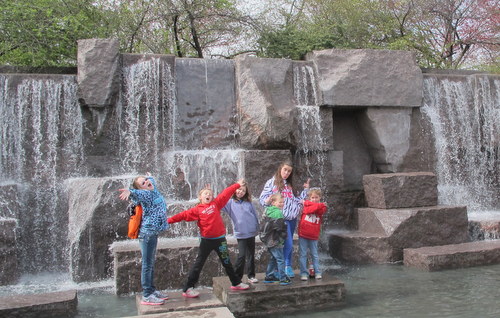 This is one of six fountains in the 7.5-acre memorial and people were lined up to play and pose with it.

Just next door to the FDR as you walk along the blossom-less Tidal Basin is the memorial to Martin Luther King, which opened in 2011.  See the interaction between the visitors and the man and his story?  Me, neither. 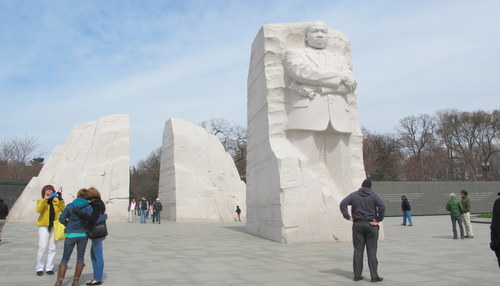 This photo is typical of what I observed at the memorial.  It’s no wonder people aren’t engaged – there’s nothing here but one giant, grim statue of King, two more large masses of stone, and wall after wall of text.   There’s no way to see King up close, to touch him or be photographed with him or to amble through the telling of his story.

That’s the sad reality of memorials in the hail-the-dictator style.  For King of all people, this memorial seems so cold, so sad.  (I have hopes for a more engaging telling of King’s story by the Museum of African American History and Culture, now under construction.)

Biking eastward along the Mall, I found a few floral displays. 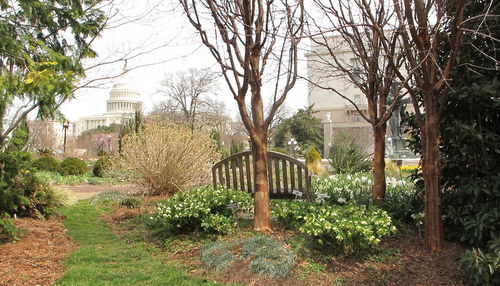 Hellebores in the Bartholdi Garden, part of the USBG 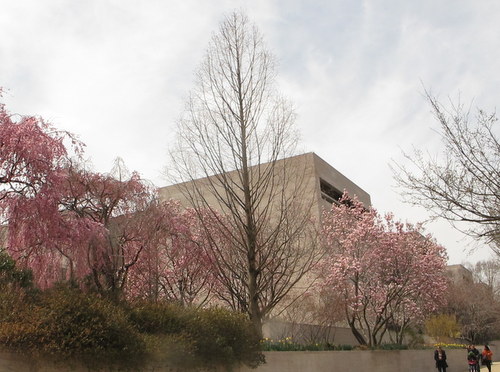 Tulip Magnolias at the Air and Space Museum.