Layanee DeMerchant Loves Downton Abbey but asks, “Where are the Gardens?” 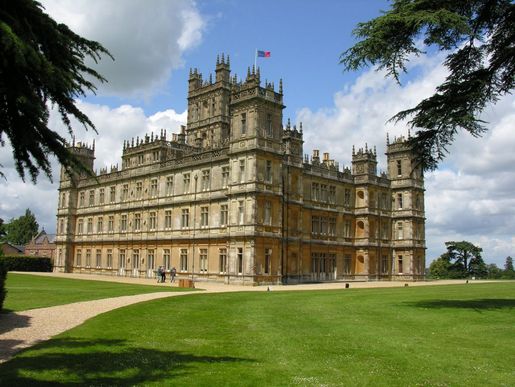 I confess; I’m caught up in the romance and intrigue of the PBS series, “Downton Abbey.” I’m enjoying the fashion, the opulence and the stunning backdrop of a castle, on top of the great acting and the fascinating changes going on in British society at that time, so unfamiliar to us Americans.  But something is missing from the series, especially for those of us who have devoted our lives to gardening in one form or another.

Most of us recognize the iconic image above. The castle, framed by cedars of Lebanon, is sitting as if it just landed in an open field.  Where are the gardens? Where is the classic English perennial border? The cutting garden? The vegetable garden?

Downton Abbey is actually Highclere Castle. Many of the scenes are filmed on the grounds and in the rooms. The building stands as it did when first built in 1842. It’s surrounded by 1,000 acres of parkland. The grounds of Highclere include those gravel walkways and drives seen in the series. There are those towering cedars of Lebanon planted 250 years ago.  We’ve seen Lord Grantham strolling with his Cora along the walks.  We’ve seen him strolling with his yellow lab. We watched  as Cora’s mother, Martha, played by Shirley MacLaine, arrived in the mist in her fancy car. The austerity of the grounds is theatrical but what of the actual gardens have we spied? They are there, they are just not shown.

Britain is a gardening nation and the grand estates had greenhouses and vegetable gardens, along with follies, parks and meadows. The lavish perennial borders were coming into vogue a la Gertrude Jekyll, albeit perhaps first for the wealthy, the aristocracy.  In the early 1900’s the estate gardens provided food and flowers for the table year round. Flower arranging was one of the ‘arts’ which could be pursued by a lady and surely was a more interesting pastime than changing clothes yet again.  At Highclere Castle there are three greenhouses, though no hint of them is shown.  No vegetables are now grown on the property.

The filming of the series is said to take place from February through the spring, a period when the house is closed to the public. I have it on good authority that the gardens are actually off-limits to the cast and crew. I guess a homeowner has to draw the line somewhere. It would be hard for any film crew to turn a spring garden into a lush summer perennial border.

Historically, many of the great estate gardens went through a ‘renaissance’ as the English landscape style of Lancelot ‘Capability’ Brown took hold, changing the face of the English estate  from the former style, which was architectural in nature – think parterres and geometry. In the 19th Century formality was eschewed for the park-like atmosphere of open space. The flower and vegetable gardens of the aristocracy were mostly functional in nature – they provided food and flowers for the table.

At least the series has shown us the fruits of the garden. Three weddings have been planned, along with numerous dinner parties replete with extravagant flower arrangements. Two of the weddings didn’t take place, but no matter. The flowers were there and were magnificent. What of the number of gardeners needed to bring the flowers to bloom? They’re hidden away, along with the gardens and the greenhouses.

Are there enough of us who love gardens to petition PBS for more exposure to them in this entertaining series? Parlor maids, ladies maids, footmen and the house servants in general may be on a higher status level than those whose tasks involve the garden, but the subject matter could be equally compelling.  Perhaps PBS should consider a new series. What would you name it, ‘The Parlor and The Potting Shed”  or “Inside/Outside.”  After all, there’s quite a bit of ‘dirty’ subject matter in gardening and that always titillates the viewers.