International Plant Propagators show their Almighty Will to Propagate 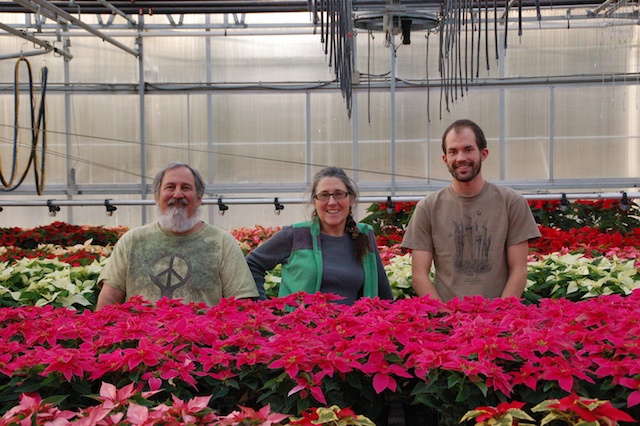 “Why do you love what you do?” This was a question posed last month at the annual conference of the Eastern Region of the International Plant Propagators Society in the Brandywine Valley, Pennsylvania. The joyful reply came from Joe LaMent (a fellow whose name in no way fits his personality) when he said, “I’m hooked on propagation.”

Joe is a young professional who made his statement in a room full of old pros. (I was far from the oldest in the room but middle-age no longer applies.) Nurseries and greenhouses are desperate to recruit young talent. It’s a tough business where few owners drive fancy imports. Nobody is getting rich. (The joke goes like this: “How do you make a small fortune in the plant business? Start with a large fortune.”) But a career in horticulture, and a passion for plants, doesn’t mean you’ll end-up in the poorhouse. It might, however, take you places you had not imagined. 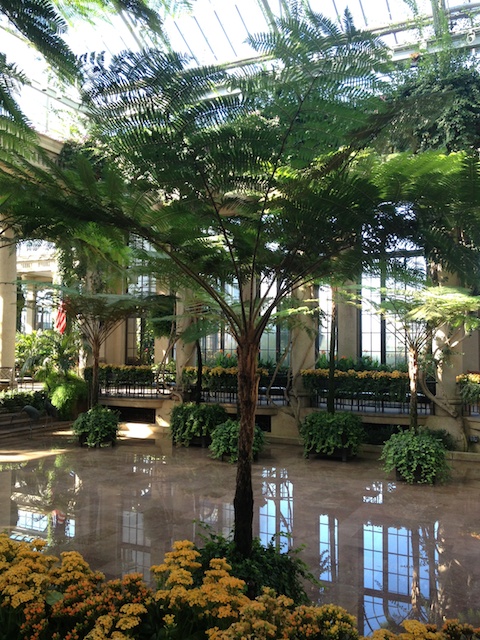 During a coffee break, on the first morning of talks in the beautiful Longwood Gardens Conservatory, filled with mums, tree ferns and yellow flowering kalanchoes,  Sharee Solow walked up to me. Sharee had a plan. She and Rita Randolph were heading off the next day on a tour of their own, to visit nurseries and private gardens. Sharee tried to shame me. “You can do the DuPont Legacy Tour or you can hang with us.”

It’s a bit like going to Yankee Stadium to see Yogi Berra at the old-timers game. The DuPont homes, like Yogi, might be little long in the tooth, but they harken back nostalgically to a bygone era. Although stately homes and historic gardens wouldn’t be a bad tour option, Sharee’s determined look read sternly otherwise: Don’t be a dumb ass! Sharee was behind the wheel the next morning when we headed north up I-95.

I prefer the solitude of my home garden, but I do like to meet other gardeners on their turf. It’s not the same seeing photos of lovely gardens and plants every day on Facebook or Garden Rant. There’s no substitute for the real thing.

Sharee lives and gardens near Philadelphia on a little spit of land that is equal parts rare plant repository and quiet refuge—that is, when the commuter train isn’t rolling by, on the hillside above. Childhood memories and an early career may explain how she has learned to blend an eclectic mix of vines, dwarf conifers, perennials and water plants in a small space. Before she wandered into the garden world, she was a theatre costumer in New York. Gardening eventually caught her fancy, and a landscape architecture degree followed. Now Sharee has her own design business and assists other garden educators around Philadelphia, notably the Perennial Diva, Stephanie Cohen. Sharee lectures, as well. I eagerly anticipate hearing what she cooks up from her recent trip to North Viet Nam. The Medicinal Plant Display at Hanoi’s Museum of Ethnology sounds particularly intriguing. 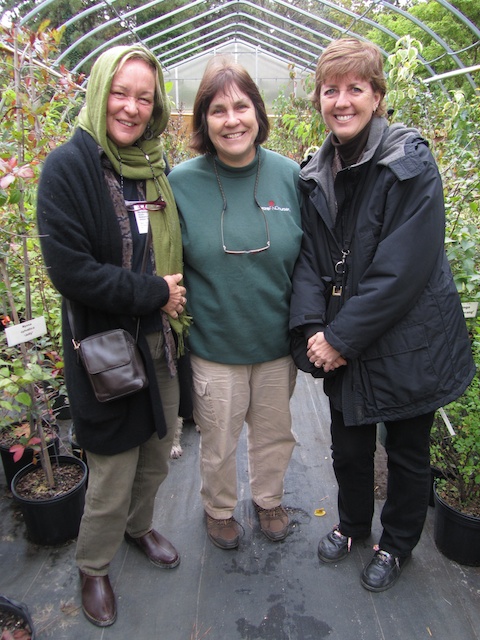 Our other companion, Rita Randolph, is legendary for her unrivaled enthusiasm and triumphant laugh. The fun-loving, writer, photographer and 2nd generation nursery owner from Jackson, Tennessee, is also a gifted teacher and popular lecturer whose persuasive charm can turn a new gardener from timid into devil-may-care. Her plant combinations are exuberant expressions of an almighty will to have fun. She and her husband, Hamp McCall, are converting the beloved 65-year-old retail Randolph’s Greenhouses into a specialty mail-order nursery called Rita’s Rare Plants that will be unveiled in spring of 2013.

Sharee had big plans for the day, but the schedule changed within minutes of our arrival at RareFind Nursery. Anne Haines met us, sized us up as sufficiently nutty, and piled us into a golf cart for a tour. We made frequent stops to praise plants. We lingered longer at RareFind than we’d expected. There are few American nurseries with such an extraordinary salable collection of trees and shrubs. We were in a grove of rhododendrons, witch hazels, dogwoods and dwarf conifers. It was past lunchtime when we left. The schedule was shot; we headed back. We stopped at Sharee’s Jenkintown, PA, garden, filled to the brim with fascinating plants surrounding the backyard pond and street side rock garden. 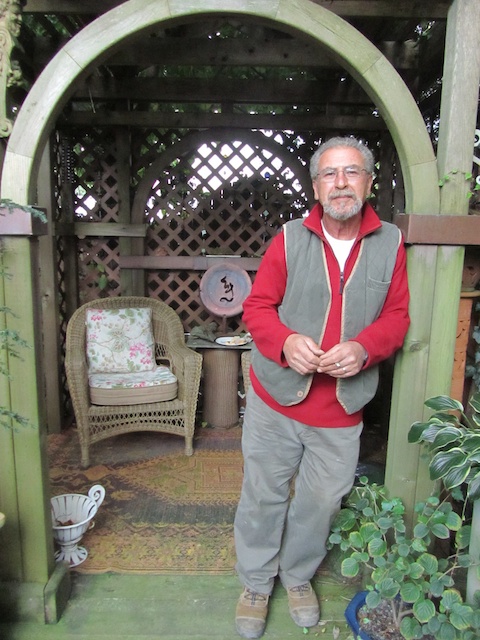 Then it was on to nurseryman Michael Colibraro’s place in nearby Willow Grove, just in time for a glass of Querceto Chianti Classico Riserva 2001. No one does garden hospitality like Michael. Stone troughs, a pergola, sculptures and bamboo fencing are a few of his props, accompanied by rare trees, shrubs, tropicals and perennials. I’ve never seen a bonsai collection so elegantly displayed (and it wasn’t just that the lubricant of a second glass of wine was kicking in). In less talented hands, all of this could easily be a jumble. But Michael is a landscape artist whose garden is handcrafted with colorful and textural precision. 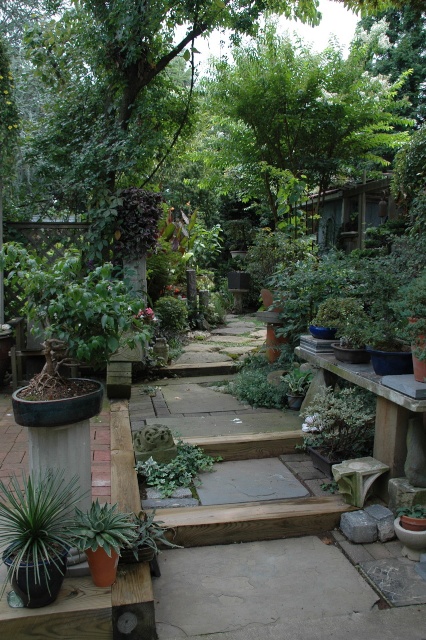 Back pathway in Colibraro garden. Photo by Rita Randolph.

See photos and raves by another admirer of Michael’s garden.

On the last day, Greenhouse industry innovator, Lloyd Traven of Peace Tree Farm, spoke to the conference. Lloyd thinks way outside the nursery. He and his wife, Candy, have re-invented efficient and sustainable ways of greenhouse production for thirty years. And they have an intuitive gift for developing a fascinating plant product line as well as for recognizing talent. Lloyd told me he hired the young Joe LaMent because of his motivation and passion. Joe started his career in an auto body shop but found it was as stifling as a concrete coffin. He found salvation. Joe confessed, “Plants produce happiness, a connection to nature.”

My sidekicks know this profound happiness and connection to nature all too well.

You’ll need to crawl over me, if space is limited, the next time Sharee and Rita plan another joy ride.