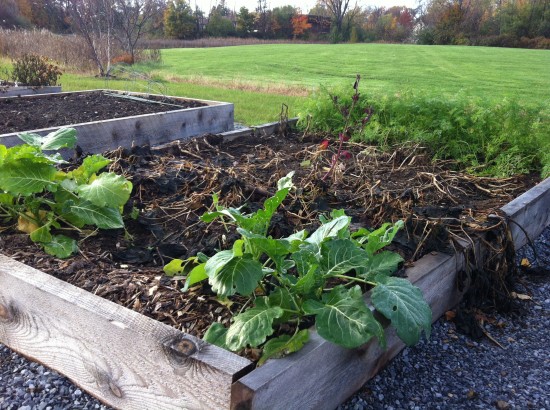 The one real contribution I hope to make to the literature of vegetable gardening is my total shamelessness. I’ve been growing so much food for so long that failures of any kind do not faze me, whether due to Acts of God or my own negligence. I firmly believe that perfection should be left to the professionals (and also that even the professionals never achieve it, because Mother Nature has her moods.) Unlike perfection, half-assedness and laziness are reasonable goals for people with day jobs. And fortunately, when it comes to growing food, half-assedness and laziness are generally sufficient for success.

Here’s proof: My community garden plot, which I visited exactly three times over the course of the season: Once, in mid-July, to plant. Once, in mid-August, to thin the carrots, bury the potato plants in their trenches, water, and weed. And then again yesterday to harvest.

I took the plot in the inaugural year of a lovely community garden organized by the delightful Susan Bokan on a patch of vacant land at Wesley, our local senior housing campus. Since I sold my second home, I now garden in my city backyard, not in the expansive garden I had in the country–and I often feel a little claustrophobic there and long to spread out. When Susan called me on June 6th to offer me a bed, long after I’d gotten my own backyard garden in, I said, “Susan, it’s a little late in the year, isn’t it?”

But half a second later, I thought, “second crop of potatoes” and took it.

I wound up annoying the rest of the community gardeners by failing to plant until mid-July. Hey, I know my potato schedule very well! But for many weeks of the summer, my six by ten foot raised bed was the only unpretty square in a pretty patchwork quilt.

Besides as many potatoes as I could cram in, I planted only three other crops in my bed: A strip of carrots at the front, a single row of sweet potatoes, and a row of collards.  And then I forgot about the whole damned thing, until mid-August when it occurred to me that I should really thin those carrots. The bed was very dry, so I watered, just that once.

I live in the Northeast, where this particular form of neglect–a failure to get out the hose–tends not to be lethal.

Yesterday, I pulled out a lot of potatoes from that little bed and a scary number of gorgeous, sweet carrots. I’ll let the collards sit a little longer. 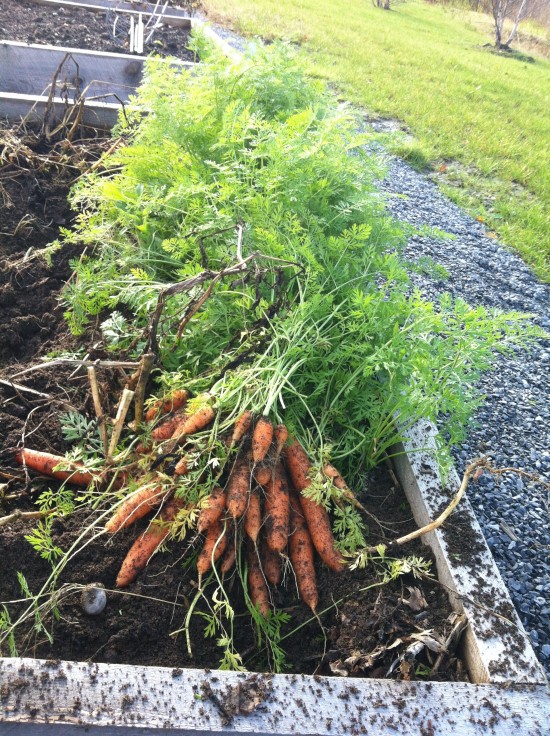 And the sweet potatoes! A total flyer. A crop I’ve never grown before, mainly because I live in an uncongenial climate for sweet potatoes. Sweet potatoes are native to South or Central America and are reputed to want a long growing season and lots of heat. I thought I would give them a try this year, now that I am gardening in balmy Saratoga Springs, NY, Zone 5, rather than chilly Washington County, NY, Zone 4. In spring, I tried getting slips going in the house as per instructions, using organic sweet potatoes from the supermarket. A total failure: no slips, just rotting sweet potato bits sitting in jars of foul water on the windowsill.

Clearly, planting sweet potatoes in mid-July in upstate New York is ridiculous. But nonetheless, I did have a couple of sprouted sweet potatoes sitting around the kitchen as I was planting my community garden bed, and I stuck them in the ground in the name of science.

My God, what a productive crop! Each sweet potato yielded dozens of young ones. They weren’t huge, but surely would have been delicious, except that a vole had beaten me there and eaten nearly every one hollow. In fact, I disturbed the fat little vole with the excellent palate while yanking them out.

But I do not consider this a failure! Instead, it is an illuminating experiment. And next year, by God, I will make sweet potatoes work.

I love vegetable gardening! A tiny little plot, the minimum of attention, yet nonetheless, always the opportunity not just to eat well, but to learn something new.