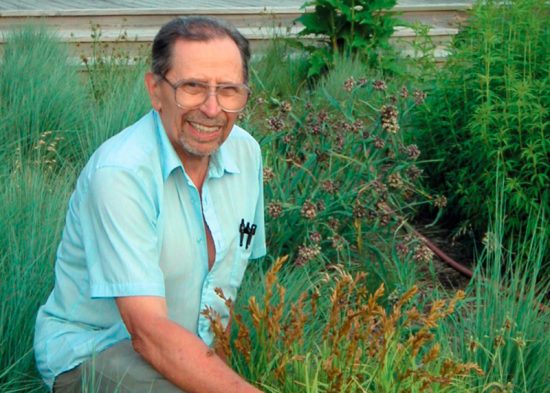 Many in the gardening world are mourning the recent loss of Wolfgang Oehme, one of the world’s most famous and influential landscape architects.  He and his design partner James van Sweden popularized sweeps of ornamental grasses and easy, mostly native perennials in a naturalistic style named The New American Garden.  Oeheme has said he wanted the masses of meadow-like grasses and perennials to be both a metaphor for the great prairies of the Midwest and also to remind viewers of ocean waves and indeed they do – with any breeze at all.  They planted not in the usual groups of three or five but by the hundreds or thousands, depending on the size of the landscape.

“I like it wild”, Oehme said in describing this style.  He also liked gardens that are natural – no chemicals – and gardens that are interesting in all four seasons.  He loved that his gardens, filled with low-care, sustainable plants from around the world, attracted birds, bees, butterflies, dragonflies and frogs.

The New American Garden style was a huge departure from and rebellion against the sweeps of nothing but lawn that up until then had typified American landscapes.  Rather than keeping front yards open to the street, he planted shrubs and trees in front of homes, to create privacy – also an unAmerican practice.  Even more heretical, Oehme hated the most commonly used shrub in the Mid-Atlantic region – the azalea – on the grounds that it flowers for just two weeks before becoming a boring green bush.  He championed grasses instead – they look good all year, and of course they move.

Some of his design team’s more famous works include embassies, universities and private homes, including Oprah Winfrey’s.  In Washington, they designed the grounds of several major federal buildings, including the Federal Reserve Building, where he covered its two acres over a parking garage with sweeps of fountain grass, ‘Autumn Joy’ sedum and feather reed grass.

The New American style quickly became popular with other designers and nurseries had to start growing these plants to keep up with demand.  In addition to grasses, they popularized such perennials as black-eyed Susans, coneflowers, salvias, joe-pye weed, and Russian sage.

Oehme was born in Germany and began planting things at the age of five.  As a teenager he worked in a nursery, then for a local parks department, where he became interested in landscape design. He studied landscape architecture at the University of Berlin and worked on large projects for the Frankfurt parks department and for nurseries in Germany, Sweden and England.

In 1957, he left what had become Communist East Germany to come to the United States and settle in Baltimore, which he considered a horticultural desert.  So he embarked on a crusade to do something about that desert – by designing for the Baltimore parks department and on the side, for private residences.  Those early private clients were pretty gutsy to break the mold of lawn and azalea-filled gardens in their neighborhoods, but many of their gardens still stand and continue to inspire the gardening world even decades later.

In 1964 Oehme teamed up with James van Sweden, then an urban planner, to form Oehme, van Sweden & Associates in Washington, D.C., and they worked together for 30 years.  Here’s my blog post about van Sweden’s garden on the Eastern Shore.

Wolfgang Oehme died at his home in Towson at the age of 81.

You and the New American Garden
This “new” style of gardening was already in vogue before I got serious about gardening, so I was influenced by it without realizing it.  Those grasses!  Those masses of perennials!  Soooo unlike the prim rows of annuals and clipped evergreens that comprised the garden of my childhood.  My mother may have taught me to love gardening but her style?  Not so much.

How about your garden?  Is it New and American?