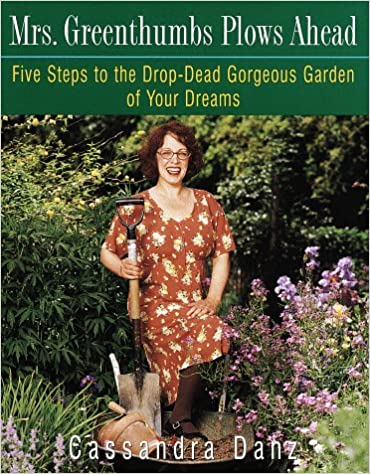 My next-door neighbor recently said that she was stumped by design questions and that I should write a book about the subject. I laughed. If you want to know how to grow potatoes, I’m your woman. Design? No.

Since most garden design books strike me as abstract to the point of absurdity, with advice on the unhelpful order of “consider proportion,” I went on Amazon and ordered my neighbor a copy of the out-of-print Mrs. Greenthumbs Plows Ahead: Five Steps to the Drop-Dead Garden of Your Dreams because its advice is simple and friendly and comprehensible. There’s lots of sensible stuff about relating the garden to the surrounding architecture, such as using the golden section to calculate a visually pleasing depth for a bed in front of a fence, or finding the right stylistic vibe by making the garden about as formal as your house or slightly less formal.

Mrs. Greenthumbs, also known as Cassandra Danz, was a Brooklynite by birth, a comedian by trade, and a passionate gardener who ultimately made a career for herself planting pansies in handbags on the Live With Regis and Kathie Lee show.  Or so I’ve heard. I could never watch that show, always finding Regis and Kathie Lee’s patter disturbingly similar to the spiel I used to hear from the crackheads in Morningside Heights when I lived there in the late 1980’s.

Danz’s first book, 1993’s Mrs. Greenthumbs: How I turned a Boring Yard into a Glorious Garden and How You Can, Too, is one of my favorite of all gardening books for its snappy writing style. Yes, Mrs. Greenthumbs is a little tacky, with her dyed red hair and rayon dresses and relentless jokiness, but only in the smartest and best educated way: She is well aware of herself as a force for democracy in the snooty New York horticultural word.  Yes, she belongs to the bad old days before Jeff Gillman and Linda Chalker-Scott began subjecting gardening advice to the test of science, when most cultural recommendations were either mindless anglophilia, primitive superstition, or horseshit pure and simple. (Double digging anyone?)  But she did passionately recommend compost and mulch, good woman, and understood the cycles of life.

I love her because she was fearless and funny and culturally clued-in, and a gust of enthusiasm comes off every word she ever put to paper.  She wrote about flower colors and giant lilacs and the experience of gardening itself the way they ought to be written about–as if she’d spent the most vivid moments of her life in the garden and the bedroom. Here’s Mrs. Greenthumbs on the subject of ridding her yard of invasive bamboo:

My husband chopped the bamboo down using a machete he bought from Soldier of Fortune magazine.  I remember the sweat glistening on his torso.  I felt like Ava Gardner in Mogambo.  In a tropical frame of mind, I put on my muumuu and quickly mixed some Mai Tai cocktails.  We sat on the porch, looking at the bamboo stumps, waiting for the elephants to stampede.  Gardening is more fun than you think.

Then she has the nerve to continue the bamboo discussion this way: “After drinks and intercourse, we decided to do it the natural way.”  They finished the bamboo with the lawnmower.

Or how about this consideration of pollination, from a chapter titled, “A Petunia Named Desire”:

Most people tend to assume that the bees have no knowledge of the plant’s use of them and are only after the nectar.  In other words, they are a bunch of unwitting stooges, slavishly servicing the carnal appetites of the flowers and getting no fun out of the experience at all.  I don’t think so.  I have observed bees going from flower to flower in the garden, and they seem to be enjoying themselves enormously.  I wouldn’t presume to know the thoughts and feelings of bees, but if I saw a bunch of teenagers sipping nectar, rolling around with their feet up in the air, covered with fragrant pollen, and then racing off to do it again and again, I would assume they are having a wonderful time and would probably call the police.

Can you imagine, for example, The New York Times ever publishing any gardening piece with a fraction of that much personality?   Certainly, movie reviews and food writing and political commentary are allowed to have personality.  Gail Collins has so much personality, it barely fits within the confines of her column.  I frequently wonder which Olympian god decreed that garden writing alone should be so sterile.

The institutional tone (“plant for winter interest”) may explain why I’ve been bearing the 2008/2009 collapse of the shelter media with relatively few tears.  Yet when I learned that Mrs. Greenthumbs died of cancer in 2002, I took it peculiarly hard, as if she were a good friend I hadn’t yet met. In fact, I’m almost positive that’s what she was.