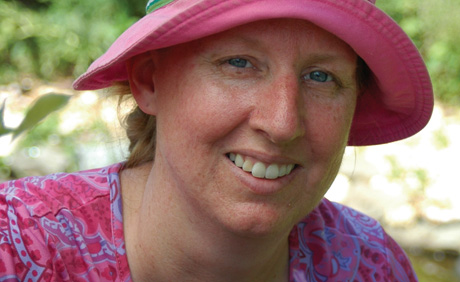 Ever read a garden magazine or book and think to yourself, “Who is this joker?”  Well, that joker would be me — your lowly regional garden writer and editor. Trolling the test vegetable growing fields and back offices of garden centers for story ideas to bring you the latest and greatest gardening trends. In that noble mission, I attended my second annual meeting of the Garden Writers Association. This year the GWA chose Oklahoma City, OK, for their international symposium. Like me, you are probably questioning why OK? Well, it turns out this jealous sibling of Texas has much to boast about on the gardening front. From tree farms to farmer’s markets, we saw it all.

Oklahoma exceeded my expectations and gave me lots of story leads to pursue. In addition, I was able to observe almost 500 of my fellow garden writers, photographers, editors, public relations flacks, and garden supply sales reps in up-close and personal quarters. I’m obviously still wet behind the ears in GWA, as I made several classic newbie errors when dealing with other garden media types. Here are a few:

One does not become a garden writer because one is a conformist. Writers in general have earned a hard-scrabble, ornery reputation. You certainly don’t go into it for the job security or money. Pair that with the often solitary pursuit and love of gardening in one individual and you get someone with little respect for authority and a whole lot of time spent living inside their own heads. When you get a bunch of us together is it any wonder chaos ensues?

My theorizing mentor told the tale of a group of GWA attendees at an event a few years earlier who took over one of the buses and did not allow others to enter so that they could use it exclusively for the touring day. They had so cowed their volunteer bus captain that he turned Patty Hearst and by the end was defending their ill-behaved actions.

Suffice it to say that I had a great time at this meet – no joke. I love meeting the people in person whose books,
articles, and blogs I’ve so enjoyed reading over the years. And yes, we can all be a little cantankerous at times, but isn’t that why you keeping buying and reading our creative output?