The Commencement Speech No One’s Invited Me to Deliver 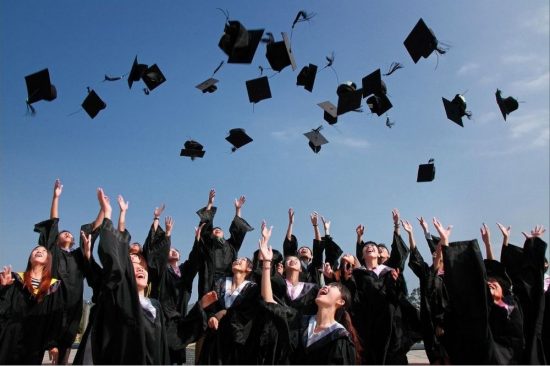 I’m delighted to be here today and want to thank Expensiva University for the honorary doctorate, too.  Suddenly, I feel legitimate, though I don’t expect the feeling to last.

Once upon a time, I thought I’d actually earn a real doctorate, but unfortunately, I tried to do it in Los Angeles, where the bands and the vintage clothing stores were far more interesting than the books.  Plus, God save me, I was just hideously bad at being trapped in the library reading academic criticism when the weather outside was glorious.  And in Los Angeles, it was almost always glorious.  And there were palm trees and bougainvillea to look at, as well as lovely, funny boys in string ties and spiky haircuts.  It was a hopeless case entirely.

But you, of course, have already demonstrated a certain superiority over temptation in earning your degree here today, and for that, I congratulate you.  It’s a convention of these commencement speeches to assume that you are now sitting here in a rather basking mood and it’s my job to just to baste the turkey and make sure it’s finished to a golden hue.

But human nature being human nature, I would bet you were done basking approximately 23 minutes after you’d finished your last exam and now have moved on to a state of nervous or frightened anticipation.  Can I actually ditch my family in time for that party?  Will they remove a pound of flesh if I do?  And while I’m worrying, will I actually be as rich and famous as I deserve to be?  I’m sure some of you have even more elemental concerns: Will living with my parents until I get a job drive me to hari-kari?

Today, I want to urge you to consider something even more elemental than that–namely, the dirt beneath your feet.

Why?  Because it’s the most reliable source of transcendence you are likely to encounter.  To put a plant in the ground is to understand the miracle of life.  Things want to grow.  Even though 55% of what gets put into the ground eventually disappears into the ether, the plants that do take hold and thrive will thrive so spectacularly, well, you’ll never mourn what’s missing.

Develop a relationship with the soil and you will get something more valuable than a Wellbutrin prescription.  Namely, the idea that many seemingly valueless things–weeds, animal wastes, apple cores and bread crusts–can provide fertile ground for the most beautiful of flowers and delicious of foods.  And maybe your own wasted moments and most excruciating mistakes, well composted, will set the stage for something better, too.  You may even get the hint that bleak periods in individual lives are generally followed by happier times, the same way that the wasteland that is winter is followed by the embarrassment of riches that is spring.

Let’s face it.  It can be hard to find such sources of hope in the modern world.  As far as I’m concerned, religion has been completely discredited, thanks to some really devoted jihadists, many homophobic American fundamentalists, and loads of pathetic and creepy Catholic priests.  But it’s tough to survive without any form of transcendence.  You’ll need it at age 25, when the boyfriend or girlfriend you’ve placed such hopes in breaks your heart.  You’ll need it even more, at 45 or 55, when you’ll have disappointed yourself many times.

Maybe you’re thinking, why would I need to garden?  I’m my own source of hope.  I believe in myself and my own originality.  And I think that’s fantastic.  I would encourage you to be bold, be original.  I was once original, too.  Then I figured out that the most interesting things in life are the most universal: love, family, the desire to have one’s own bit of ground and make something tasty or beautiful come out of it.

You’ll have to work hard in your life, of course, to be happy.  Ideally, you’ll read good books, too, and pay attention to new ideas and great events.  But I’ll leave these subjects to somebody else.  I want to urge you, as you move through this world, to take the time to learn how to cook a good meal. To pair up with somebody, if you possibly can, and construct a household.  To have children, if you’ve got the patience.  To appreciate a nice syrah.  And to plant vegetables and flowers and flowering shrubs in your yard.

These things will help you shed your petty fears, feel at one with the whole history of humanity, and have a laugh besides.  Done right, they’ll allow you to part the curtain of the daily slog and glimpse some larger meanings behind it.

It’s the great mystery at the heart of human life.  The simplest things are often the most revealing.  The lowliest tasks often the most inspiring.  The dirtiest, the most transcendent.

So take care of the earth.  I can’t say for sure, but I believe it might have been put here to tell us about ourselves.  And if we fail to develop a relationship with it, if we never learn what good soil smells like after rain, if we never bother to use a shovel or a Swedish bow-saw and move only through a backdrop pre-constructed for us by the Imagineers at Disney, we are incomplete.  Half-people.  Factory made, not hand-crafted or homegrown.  Not original.  Not the kind of people you’d want to share a sandwich with.

So go forth, my children, and become gardeners.  Or, failing that, at least become Jeff-Ball-style yardeners.  Do it with some energy, a minimum of chemicals, and a modicum of imagination, and you will not only make yourself happy, you will make all the rest of us more hopeful, too.  And we will love you for it, every passer-by who glances at your yard for an instant, and comes away brightened by your labors.

Good luck, and may all your catalog purchases thrive!