Of Bulbs, Grandchildren and Christmas: A Middle-Aged Letter To The Midwest

What a December!  I believe I spent the entire month on my knees planting bulbs during the day, and at my desk writing apology emails at midnight. And then to end with such a crazy Christmas storm week! 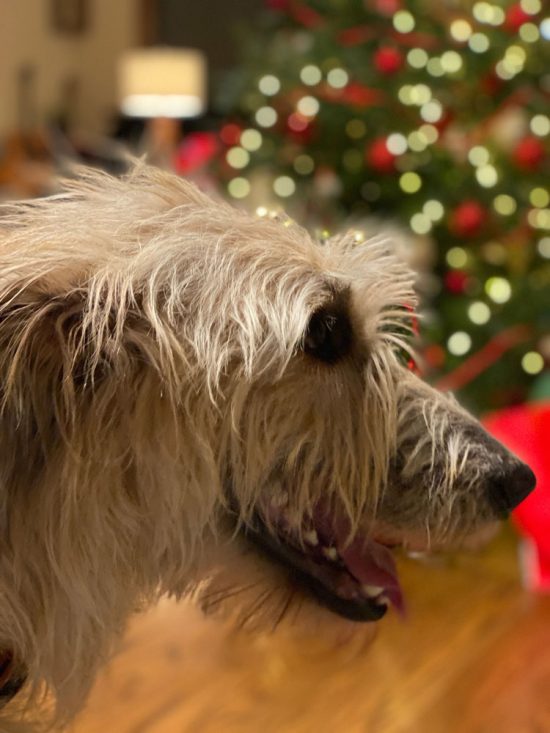 A Christmassy Nessa sends her regards.

I know that you had it worse in the Midwest (as you are no doubt getting ready to tell me), but inconveniently perhaps, you will be bested by Elizabeth in Buffalo. Hopefully she will give Rant readers her thoughts on their monster storm soon.

A few drops of Californian blood still run through my veins and protest strongly when temperatures dip that low, that fast.  Wind, rain, and @#$@# cold.  At least you got some respectable snow for all your burst pipes and icy roads, which cannot fail to excite the inner elf-child – even if he has to don a balaclava and shovel the damn stuff. 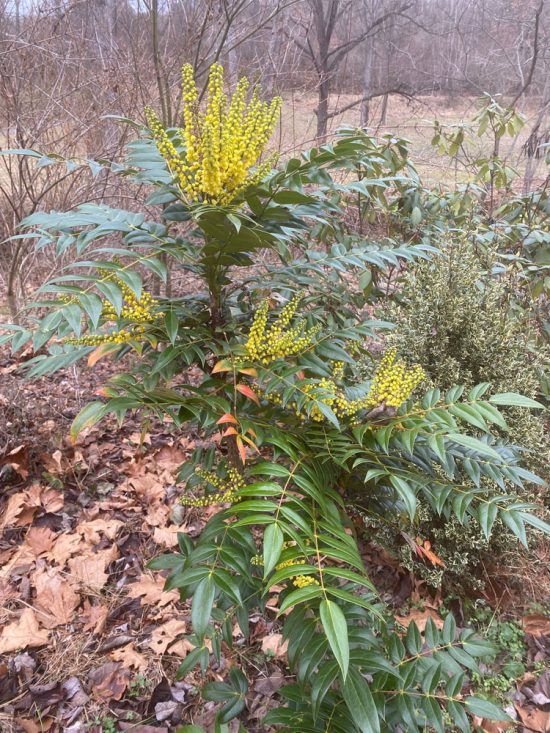 The blossoms on this Mahonia x media ‘Marvel’ we’re doing fabulously for three weeks – but they couldn’t handle the rapid plunge in temps. Isn’t it a beauty though? A trial from Southern Living Plant Collection a few years ago.

We were without power for the two days before Christmas Day with daytime temps of 10F, which is humbling on several levels. Without power you are face-to-face with a climate that cannot be laughed off by walking into a warm house and shutting the door behind you. Though we heat with a wood furnace, it relies on an electric fan to push that heat through a network of ducts.  Without the fan to vent the excess heat, we must keep the fire low to prevent a surprise appearance on the nine-o-clock news, and rely on gentle convection currents to tease warm air through the vents.

I’ll admit to a sense of humor failure at around three-thirty PM on Christmas Eve with Christmas dinner for 18 to prepare after two days of cooking in a down vest by candlelight. I only slapped myself out of my ratty mood by considering the citizens of Ukrainian cities dealing with the same situation; but, a) without hope of power being restored; and, b) the addition of bombs randomly falling out of an icy-clear sky.  Not to mention so many other people and places in the world that drift in and out of our collective consciousness through the whims and algorithms of network executives and social media giants.

The Pied Pipers write the headlines and start the hashtags, we change our profile pictures and bask in virtuous thoughts – and then, just as quickly, it is over. For us.  Certainly I would not have us bent double by the weight of all the world; but if I could wave a wand and replace the virtue signaling with 350 million quiet moments of gratitude and reflection on our blessings as a nation, I would.

Whew. Again.  Veered off course there for a moment.  I blame the cold.

In the end, power was restored a few hours later by incredibly hard-working crews that were always miraculously smiling when we passed them.  I am in awe of that attitude, and deeply grateful. I can’t imagine how they were coping in the Northeast. 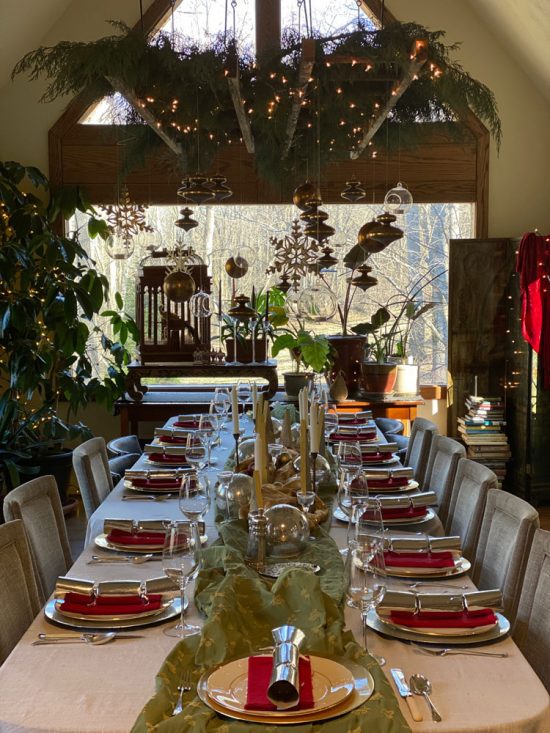 I was proud of this table this year – hung up two of my neighbor’s ladders with iron hooks from the garden and piled on some juniper and lights. Hanging glass bulbs inspired by Longwood in their displays a few Christmases ago. Coniferous and broad leaf evergreens around here finally big enough to snag from and I leave most pruning of them ’till now for this purpose. 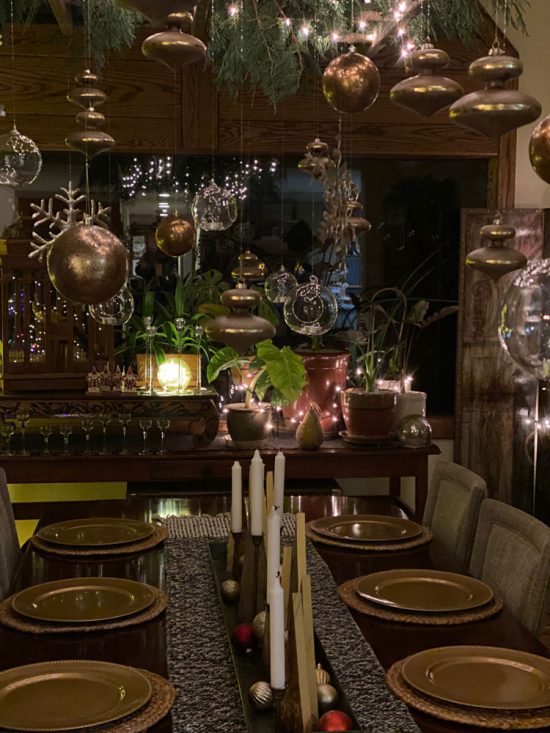 Even better at night…

I hope your holiday went off without a glitch.  Were you able to spend it with that plumpsy-gorgeous grandchild of yours?

Speaking of which, it is imperative that you keep your head in the face of grandfatherdom, and do not spend more than three minutes out of the 1440 that we are given each day in discussing this new creature and its delights.

Though you are a confirmed cynic and piss-taker of the highest order, you are still in great danger of falling prey to a disturbing phenomenon that can, within a few short months, transform an intelligent, captivating, life-of-the-party-type, to that weird guy who sits in the corner offering a grubby, well-thumbed phone and its 2,304 photos to anyone foolish enough to get too close.

If you feel the need to effuse beyond three or four words, might I suggest you put down any half-written correspondence to me, or current Facebook overshares, and call up Leslie Harris, who is so besotted by her 42 grandchildren (Or was it six? It’s so hard to tell.) that she hardly has time to put together an otherwise excellent podcast.  You can compare notes. And plants, when you both come up for air.

On the plant front here, I’m far more involved with what will be than what is at the moment.  Had a wonderful evening of swapping seeds with Janet Draper (Mary Livingstone Ripley Garden, Smithsonian Gardens), Melanie Ruckle (Putnum Hill Nursery), and Louisa Zimmermann-Roberts (Thanksgiving Farms). I say “swapping” but it was more Janet and Melanie foisting an embarrassment of riches upon Lousia and I. Exceptional women. Exceptional time. 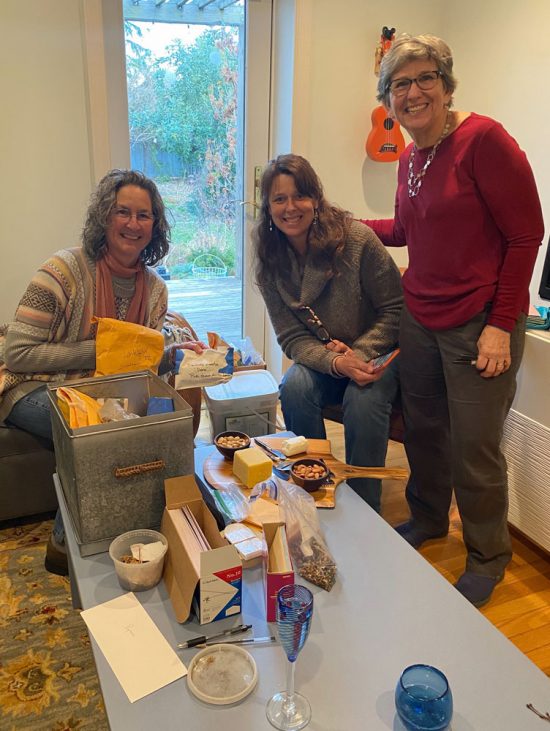 Thousands of bulbs planted since March and the first of them (the snowdrops) just starting to poke their leaves through the soil now.  Bulb planting happened in five phases, the last of which still shamefully needs to happen in the promised muddy warm up by the end of the week.

Phase One was a gift of 2000+ snowdrops in the green in March (probably Galanthus nivalis & G. elwesii), from a friend who was saving them from a property currently under the Damoclean development sword. A few short weeks and they will be making winter more bearable. 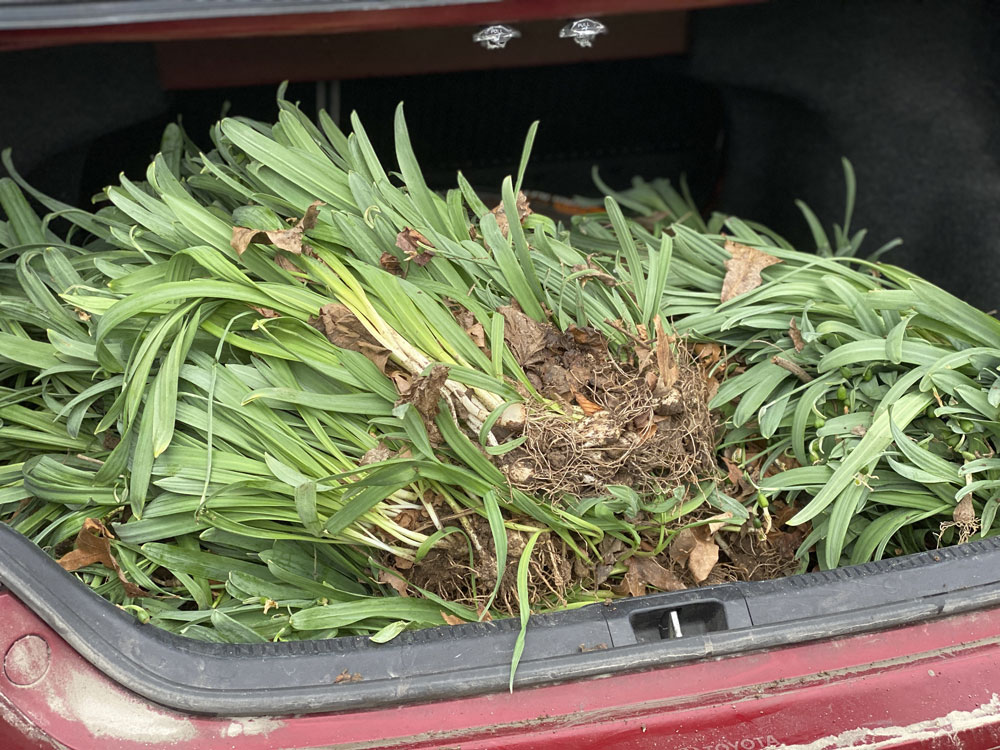 Snowdrop haul in March. This is why Mike doesn’t let me use his car.

Phase Two was an early September bulk buy of daffodils for wild spaces found in the suburban aisles of Costco, which cheaply sells common but very respectably sized bulbs from Longfield Gardens – Dutch Master, Ice Follies, Tête-á-Tête, Tahiti, etc… (though I have found a few special things there occasionally). Longfield Gardens also has an online shop.

Phase Three was a Van Engelen’s online order, and ostensibly, a Brent and Becky’s order that I wrote on a piece of paper over a lingering breakfast, but completely forgot to put in (though I waited for it to arrive, as I am an idiot).  Camassia leichlinii ‘Alba’ (after years of lusting after it in British gardens), Gladiolus communis ssp. byzantinus (ditto), more Leucojum aestivum ‘Gravetye Giant’ (this is getting embarrassing), and another bulk round of the pure white ‘Thalia’ daffodils.  More crocus and ‘Tête-á-Tête’ for the no-mow areas that Mike has finally, reluctantly, spared from his 55-inch blade.

Phase Four was an actual Brent and Becky’s order of some incredible smaller bulbs and interesting daffodils after I realized my mistake in time to seriously hit their December 50% sale.  Every year I mean to order in July. Every year I fail.

Silky species tulips (do you grow any?), Scillia litardierei, Ipheon uniflorum ‘Wisley Blue’ & ‘White Star’, Iris reticulata ‘Painted Lady’ and ‘Rhapsody’ (they have done well for me for four years in well-draining sandy soil), Alliums of all shapes and sizes because, damn they are sexy wherever they pop up, Iris x hollandica for the first time – and perhaps the last, who knows – I understand many people grow them as annuals. Even more Crocus tomassinianus to feed squirrels, and some C. isauricus & C. chrysanthus to keep near the house where I can marvel over their stripes and fancies. 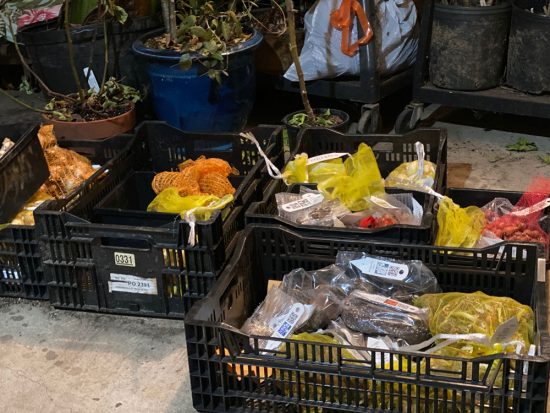 The last of planting awaits… Insanity.

Later, Brent talked me into one of their own white daffodil selections — ‘Elvin’s Voice’ which he insists are better than ‘Thalia’.  It will be fun to compare them.  It’s hard to beat the longevity, purity and late season splendor of ‘Thalia’.

In all, I have put in 5,500 so far, with a thousand to go in the post-Christmas oh-please-give-them-time-and-temps-to-root cold.  Every terracotta pot I have is in the greenhouse, fat and filled with spring color. 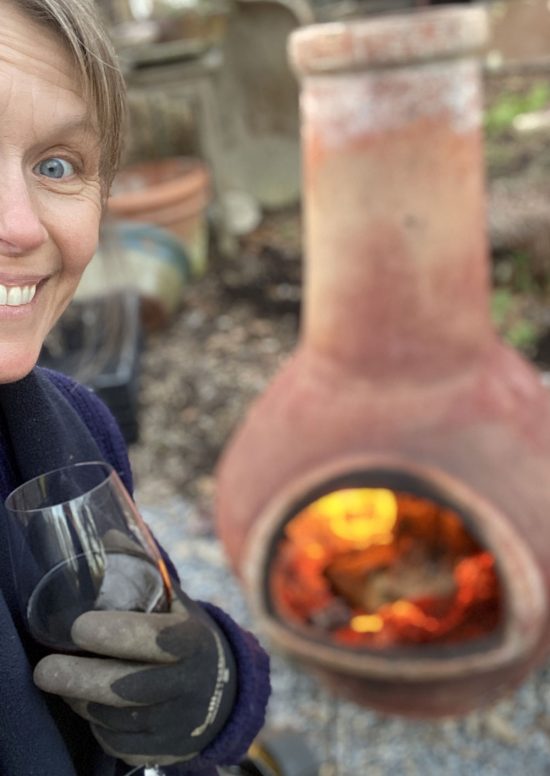 The cold weather came in hard Thursday, but my chimenea provided a warm up station for cold hands trying to defrost and write up notes. The glass of red at the end of the day helped with the warming process too.

I must take a moment here to qualify that I use the term ‘I planted’ in the same way that Martha Stewart might say “I plowed the back field and then set a table for 25 for a light dinner.”  I did have a helper for the first two thousand, and she helped again shifting compost as I planted many of the little bulbs the Lazyman Way (inch of compost – bulb – three inches of compost). My Power Planter auger made much of the rest possible, though I have had to stop using the auger in the beds– too many precious snowdrops and other bulbs too easily destroyed. I’ll have to write up something on the pros and cons of augers later.

What on earth am I doing you ask?  I’m filling this valley with color. In some cases early sources of pollen and nectar. In all cases, JOY– hopefully for many years after I start fertilizing them from the other side of terra firma.

Must run as the remains of a pretty good party are still to be cleared up. You were too kind to me in your last letter. Don’t go soft in your grandfatherdom Beuerlein. Are we on for California Spring Trials?

Happy New Year to you both!

P.S. Looks like I’ll be speaking after you at iLandscape outside Chicago in February. ‘Bad Ass Trees for Piss Poor Places’ eh?   I’ll try to bring the tone up a bit.

P.P.S.  Nigella Lawson is a witty, wicked, food writing goddess. I have eaten the below for breakfast for the last three days.  Is that so wrong? Recipe in Nigella’s Christmas. 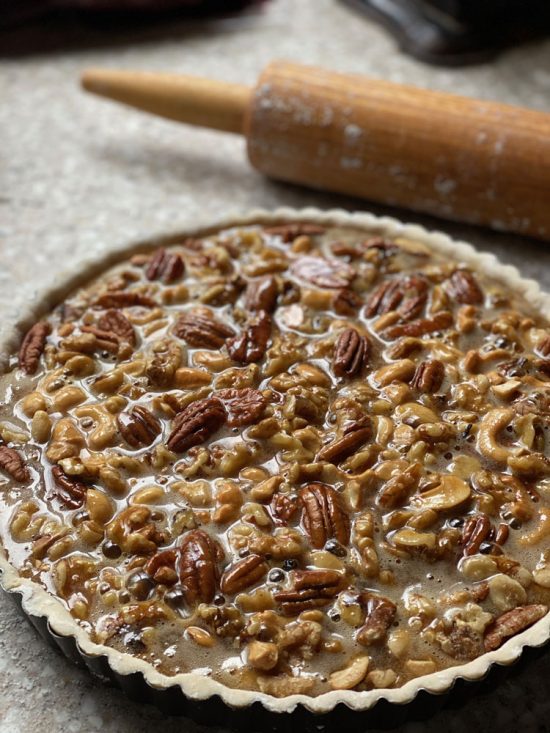