How to do garden paths (or not)

One of the ways (there were many) I was initially stumped when I started turning two fields into a garden was how to make paths in it. It wasn’t too problematic at first as I just mowed paths through the existing grassland, but as soon as the design grew more complex mowing didn’t work so well. There was always that horrible join between path and grass, (I wrote a whole chapter about that in Outwitting Squirrels..) the difficulty of cutting sharp corners and the slipperiness of grassy slopes, especially in winter wet. Gravel was just about affordable in smallish doses. 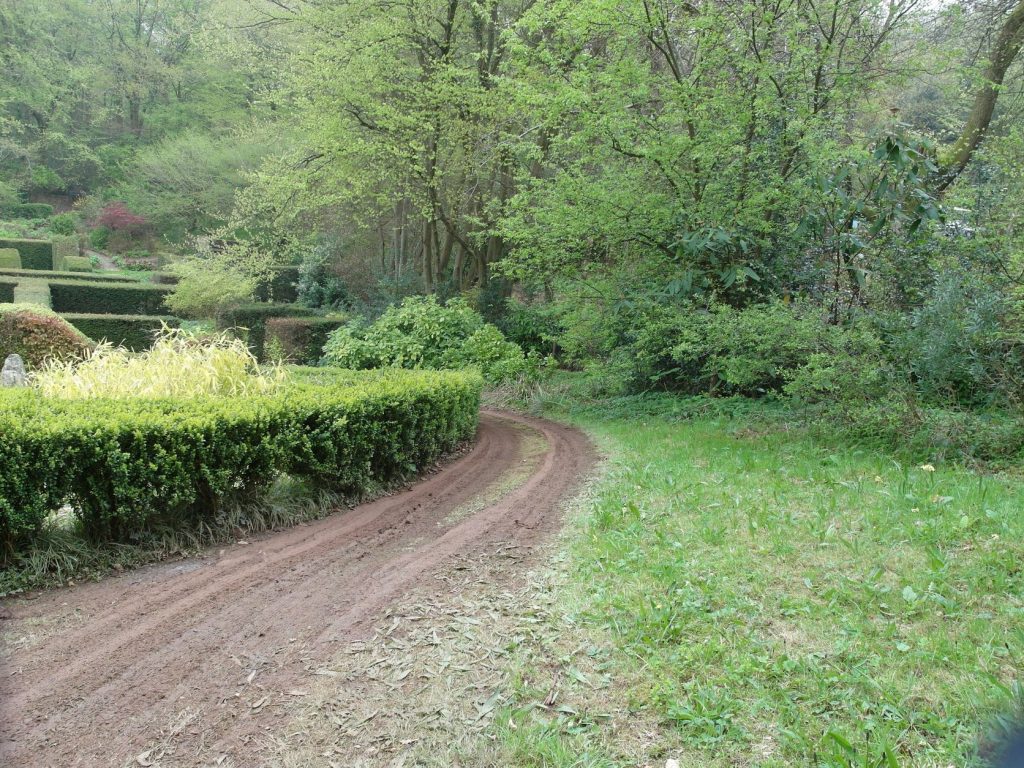 A little work with the garden tractor and this…..

We started exploring obtaining gravel and somehow discovered that gravel ‘to dust’ had clay in it, which washed nicely through the laid gravel and then set it all hard. No garden designer or landscaper could do the kind of slopes we have done this way, for fear of being sued if they didn’t set sufficiently hard and loose gravel sent you flying. There is a freedom in not having any professional help. 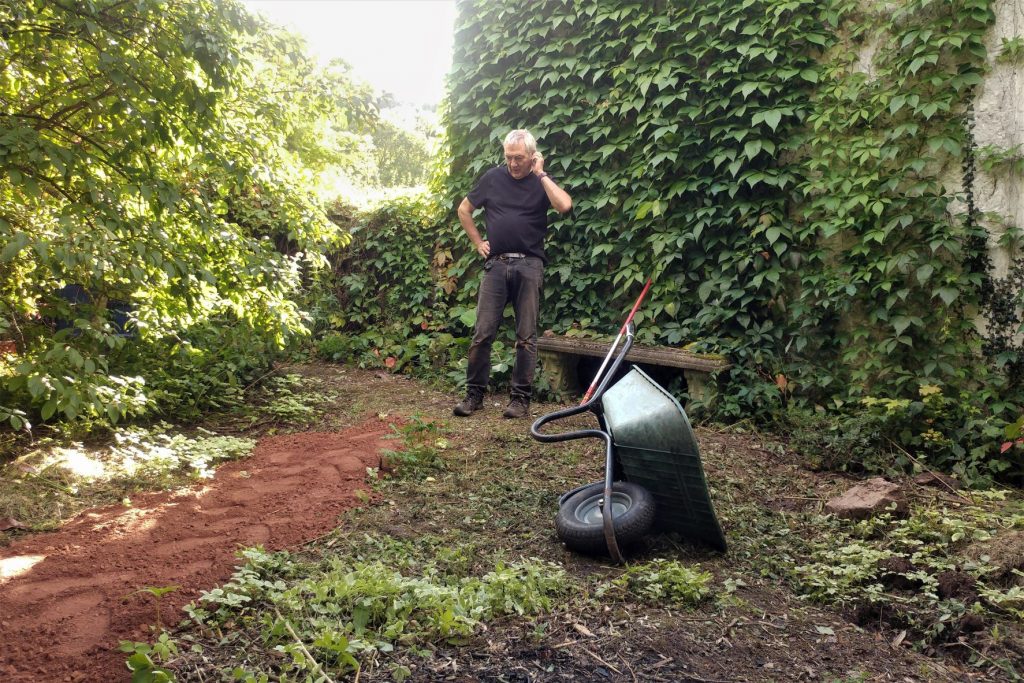 Though laying gravel paths was hard work. Fortunately we did have some help. But the cost of gravel and err..Jeff

may be why, in spite of reading so often about how paths ought to be very wide and generous, I now seem to find that our paths are rather narrow.

This has its merits. Sadly we simply cannot accommodate wheelchairs because of our steep slopes (not sure how I’ll get round the garden soon) so there is no point in having the kind of paths which posh flat gardens have for wheeled traffic, which potentially look like motorways. And often much cleaner, tidier and generally depressing than anything we can manage. 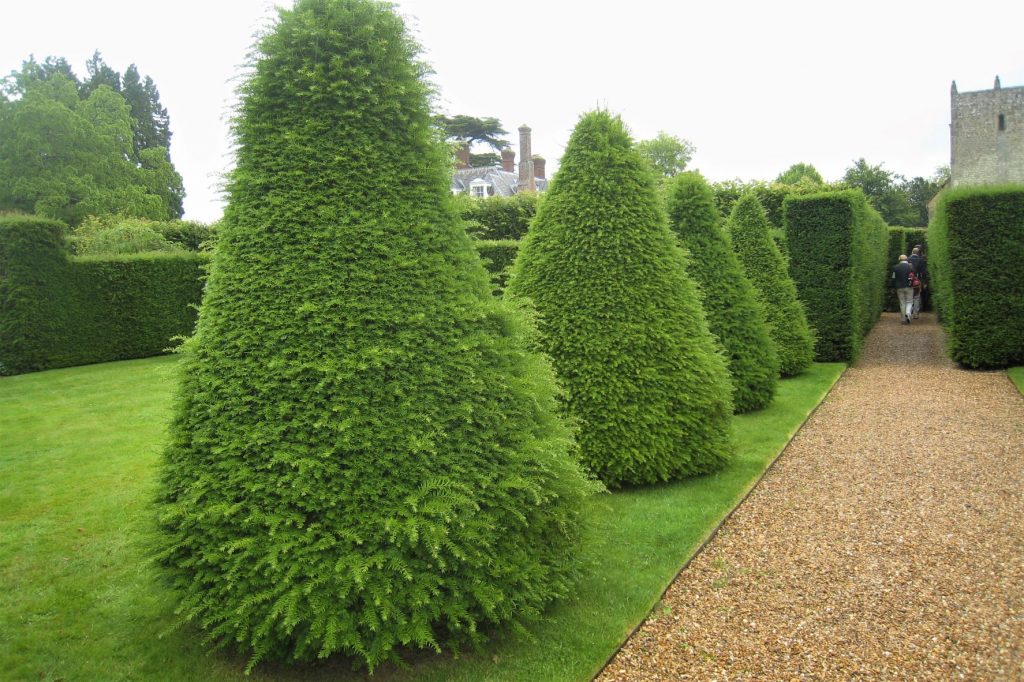 I have realised that our narrow paths mean that people cannot walk side by side much, distracting themselves from the garden glories with gossiping. In rather the same way that our plant filled steps work, they make people tread carefully and pay attention to where they are putting their feet.

Downside – that way they must hardly ever look up!

But there are seats, which must encourage a wider view.

It seems important, if possible, to give your paths a focal point – somewhere to head to which looks reasonably desirable or intriguing.  A casual compost heap created by dumping grass cuttings is probably not it. 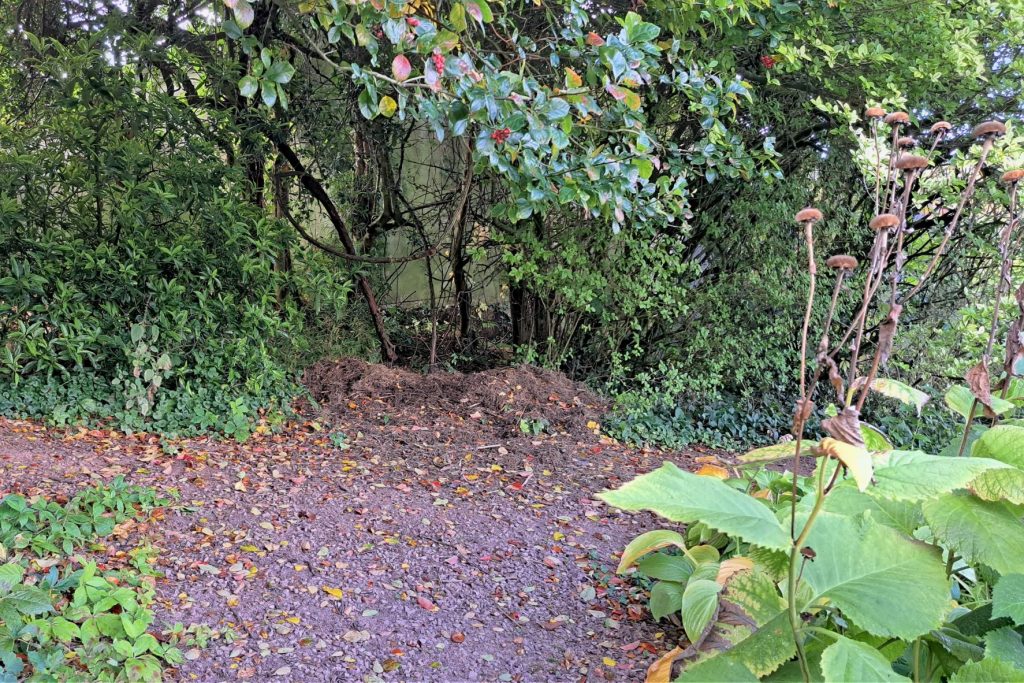 Not the best focal point a path ever had…

Nor, as our asking for garden criticism alerted us, is a ‘T’ junction: as above or below: 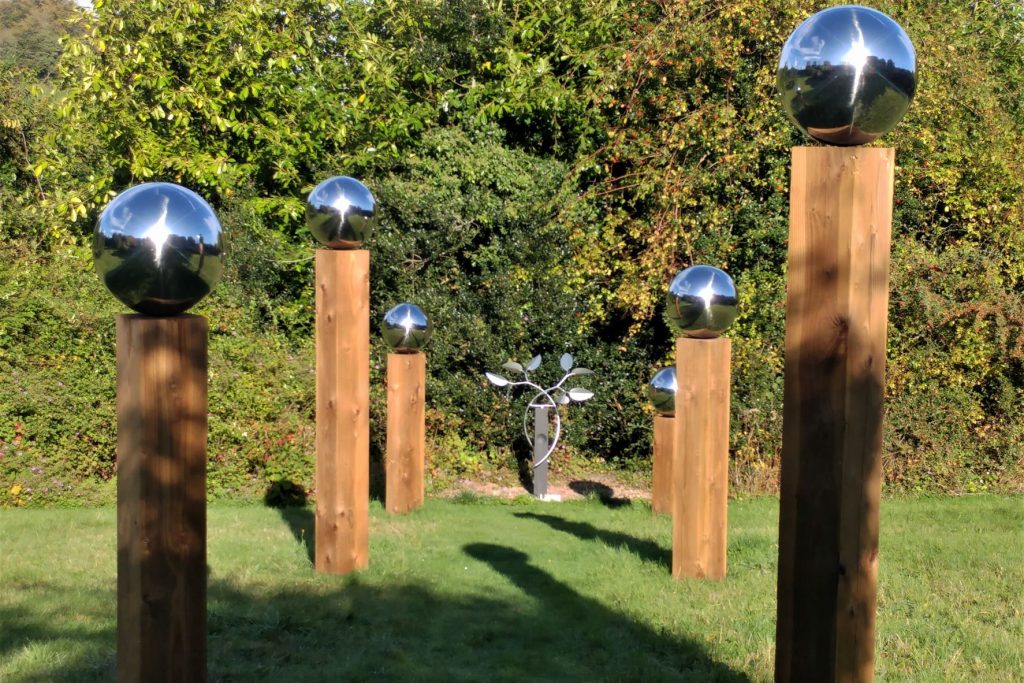 But it does have a focal point…….

This path led down to such a stopper – so in response to the feedback, we made a path that takes you straight on, into the mysterious darkness of the shrubs beyond the sculpture. I have no idea whether anyone but me uses it.

Strange discovery, writing this: most of our paths lead to a ‘t’ junction. That’s bad!

I have another serious omission with regard to paths. I have made no way through any of the rather large borders which I always need access into at some point after the plants have reached chest height or taller. I’ve got used to treading my way through, squashing things and finding myself so surrounded by enormous plants that I can’t then see a way out. Shoving my way into the roses to get at the weeds is consequently rather painful too. Deadheading – ouch…

We are advised to make paths through our beds and I would recommend it. But it does rather restrict your plant possibilities and 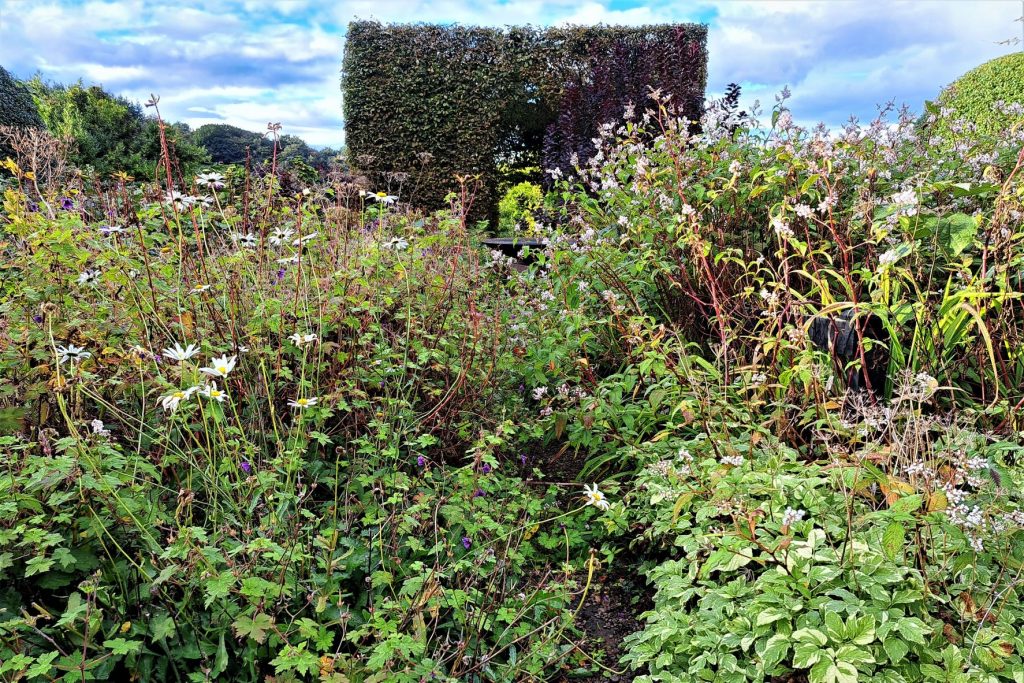 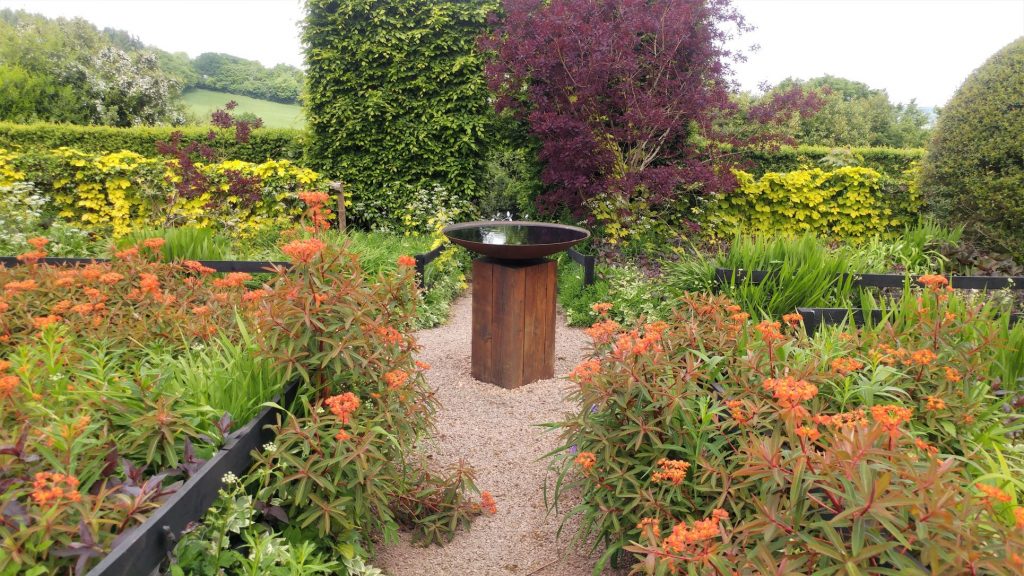 But it looked like this earlier in the year……(there was some sneaky path invasion even then, I see)

So by this time of year it can be hard to get around the garden by the proper paths, never mind find your way into the borders. And that’s kind of fine, until it rains and we rush round trying to make routes through for visitors. I apologised to one visitor, who was picking her way gently and carefully through flowers as tall as she was, and she graciously said ‘not at all, you couldn’t possibly cut these down’.

I know this is one reason why people do the staking thing, strapping plants to posts and poles to get them to stand up straight. I have many reasons for not doing that, mostly because it’s work. But I have fallen in love with railings, which do the same kind of thing. 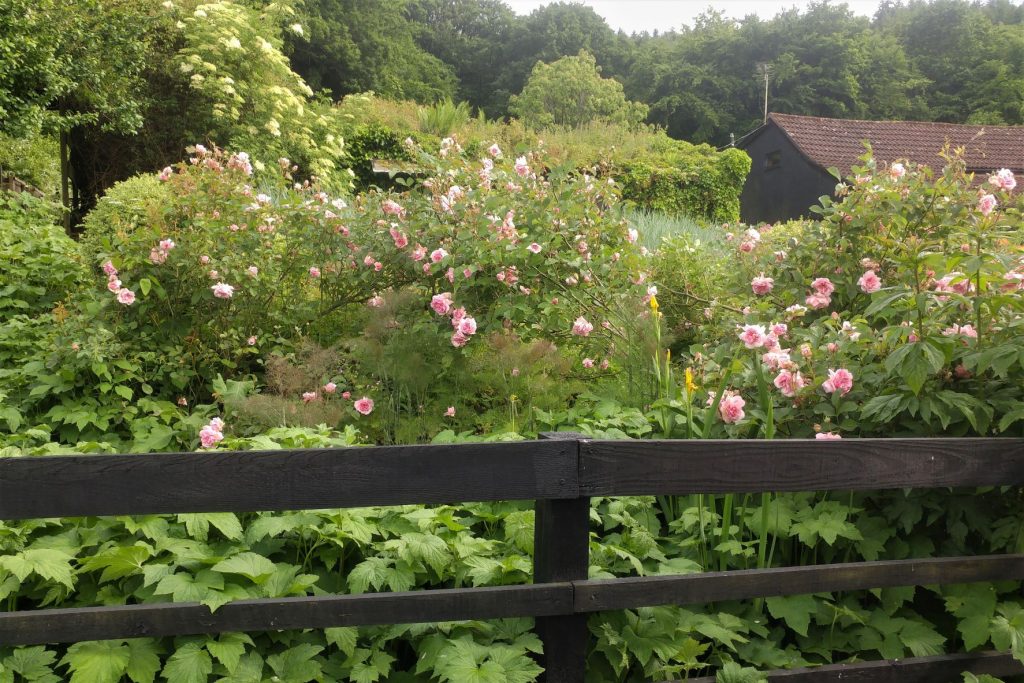 Keeping them well in order.

At least they do until the plants find their way through or over. 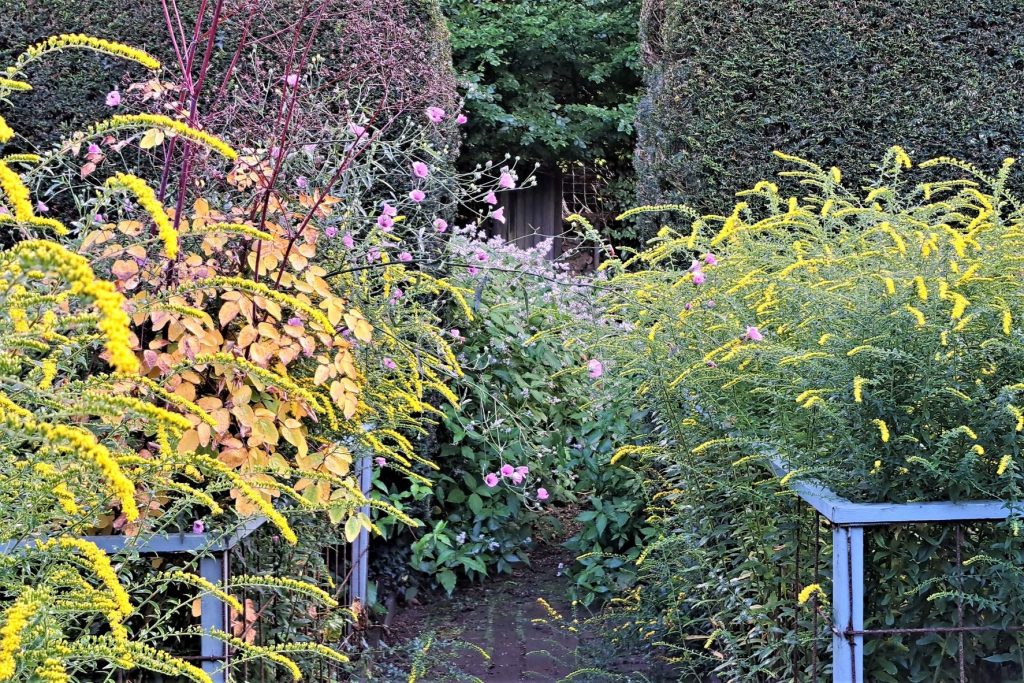 They’d manage to do something similar and uglier if I strapped them upright, wouldn’t they? I think they are just attempting to show who’s boss and totally overwhelm us:

in ignorance of the fact that winter is coming and they will be defeated in the end. 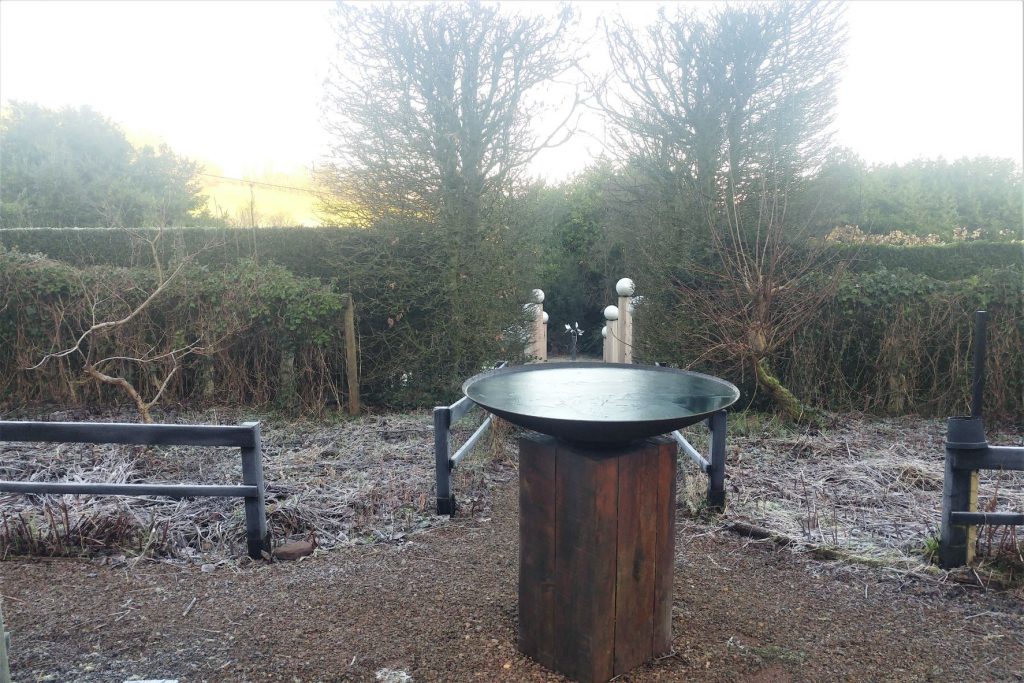 Winter can be such a relief, don’t you think???