Does a well planted, well designed, garden need ornaments?  You could say that gardens are pretty enough.  In fact, we refer to aesthetically pleasing gardens as being “ornamental” in themselves.  No artificial embellishment is required to fit the definition.

So, why do we adorn our yards with artistic decorative features?  Are we, literally, gilding the lilies?

I do it in my yarden. You probably do, too.  But do we, denizens of GardenRant, stoop to low brow kitsch?  Nooo!  We have “art” which serves as our “focal points!”

Let’s look at the different types and uses of garden decoration.

First, How Many Focal Points does a Garden Need?

A number of garden writers have weighed in on creating focal points in our gardens. The mention of plural “points” should not go unnoticed.  It’s a rare plot which includes only a single vignette.

The use of multiple focal points can involve lots of tchotchkes (items of decorative value).  I’m not one to pass up the opportunity to acquire, say, a copper rain chain, particularly if it does double-duty as décor and functional softening of falling water.

So do I have too many doo-dads strewn about? Da Missus cautions in the affirmative.  But since the yard is my domain, except for the sporadic invasion of concrete bunnies, she politely reserves comment regarding my multiple garden scenes aided and abetted by decorative items.

Even so, I acknowledge that clutter can obscure the plants or elegant lines of a beautiful garden.  Like most houses, my garden could probably benefit from a simplifying visit from Marie Kondo. 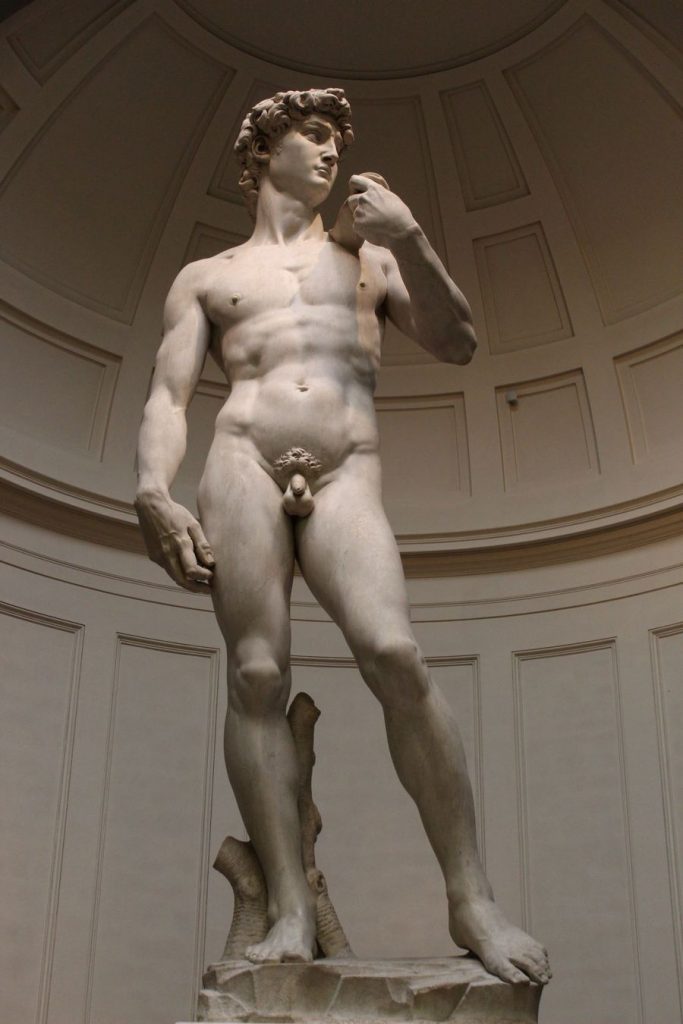 What’s Your Taste in Ornaments?

The choices you make in your garden are exempt from criticism excepting, of course, thoughtful suggestions from your spouse or partner. The rule of: “chacun à son goût applies.  That is, each to his (or her) own taste.  Caesar might have added: “De gustibus non est disputandum” . . .  in matters of taste, there can be no disputes.

There are two types of garden décor – functional and non-functional.  (There are also two types of people: Those who divide things into two types; and those who do not.)  You almost certainly have some functional ornamentation . . . maybe a bird house or a pretty fence.  These items are generally deemed safe from reproach. (Good to know if your reputation in the ’hood is already on the sketchy side.)

If we use Ionic columns, sundials, Greek vases, statuary or such, no eyebrows are likely to be raised.  These are honored as classics. The prolific Victorian use of unclad nymphs in the landscape has been previously counted as “classical,” but I suspect it had more to do with the prurient interests of our male forebears than “art.”

Da Missus says it is time for us to re-balance classical sculpture in the garden.  She recommends consideration of Michaelangelo’s “David” instead of feminine sylphs.

Art with a Capital “A” 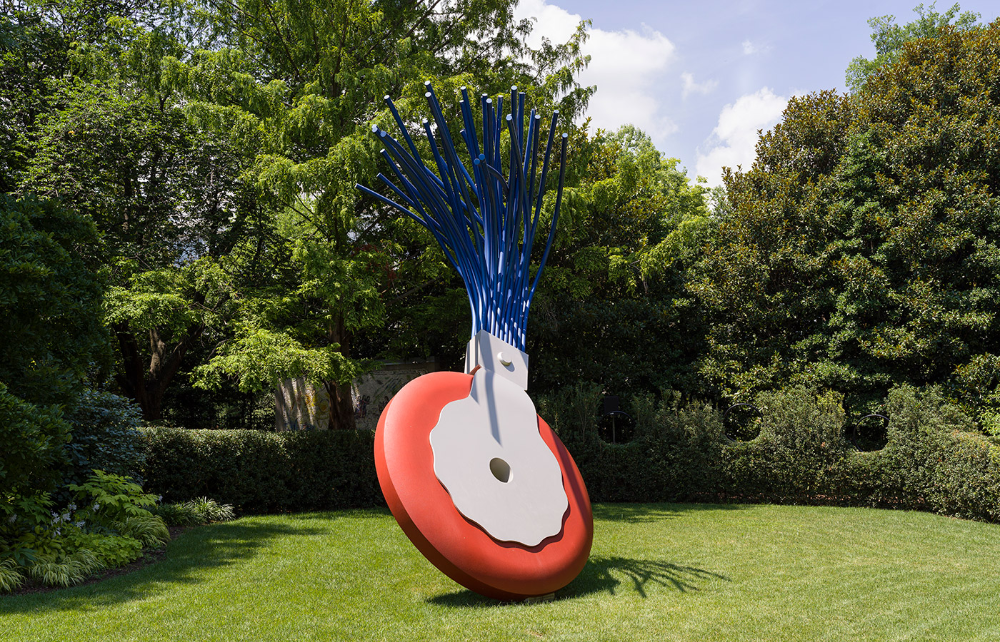 Large installations of art have fans and usually they also have money. Your pocketbook and your “gout” may differ from others’.

Fountains, ponds, reflecting pools and, arguably, koi might be classified as ornamentation.  I dunno.  But I am certain of the appeal of water sprayed, rippled, falling, or calm.  It’s a natural element, of course.  However, unless you are very lucky, you must create it yourself in your garden.  The gamut runs from the modest to the grand. 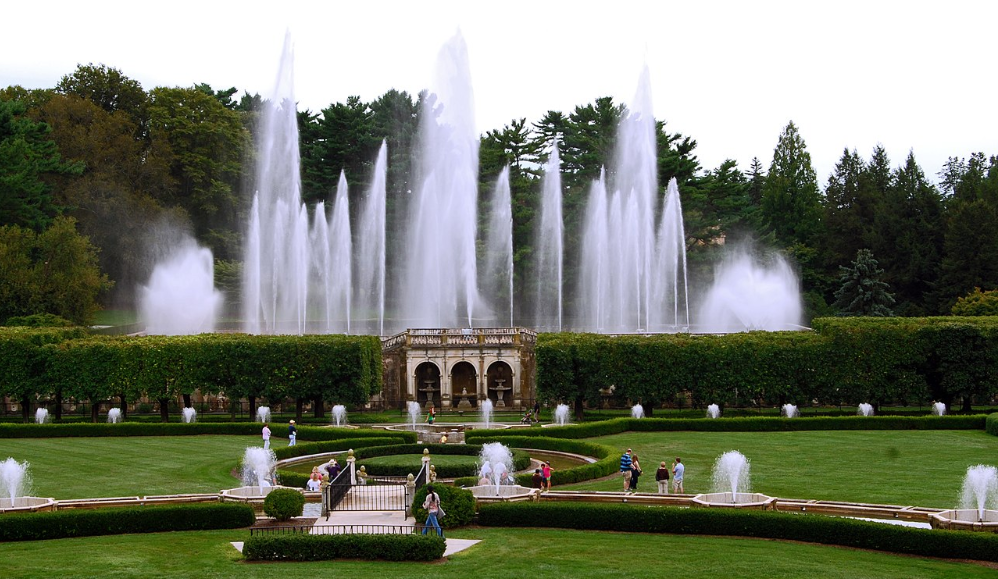 The fountains above at Longwood Gardens have been a hallmark attraction for the greater part of the last 100 years.  They were revitalized recently for a mere $90 million.  That, I think, defines “grand”!!!

When Plants are the Ornament 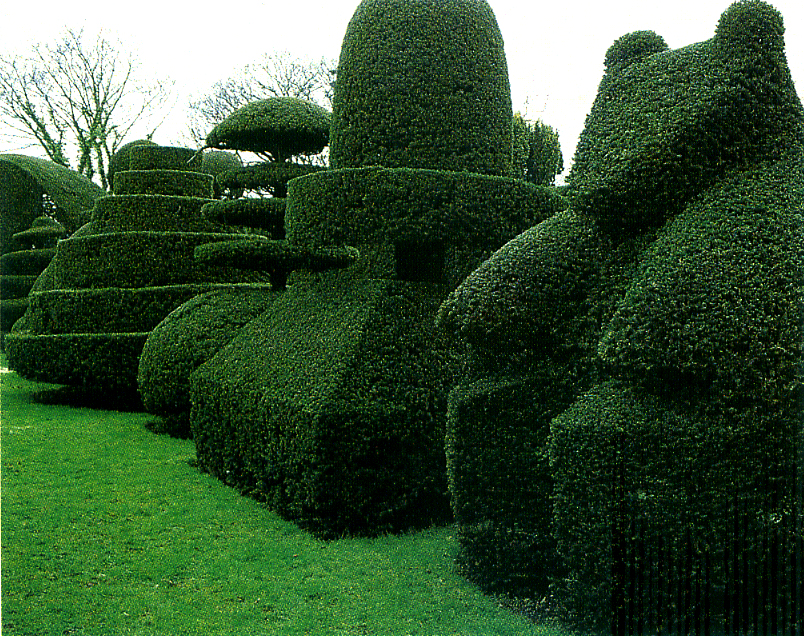 When it comes to plants used in ornamental ways, topiary comes to mind, though it’s not commonly observed this side of the pond.  (Not talking about meatball boxwood here – that’s more a style of pruning than actual topiary.) But I wonder: Is topiary simple ornamentation or artful growing?

Other examples of artful growth include a barrel “spilling” a river of flowers and patterned flower beds.  Picky readers may complain that using plants in a decorative manner isn’t “ornamentation” and they may be right.  Even so: My blog post.

Japanese gardens deserve special mention. The elements of a traditional Japanese garden include all sorts of what we might call ornaments – representations of mountains and water, symbols indicating transition, and other artificial devices. 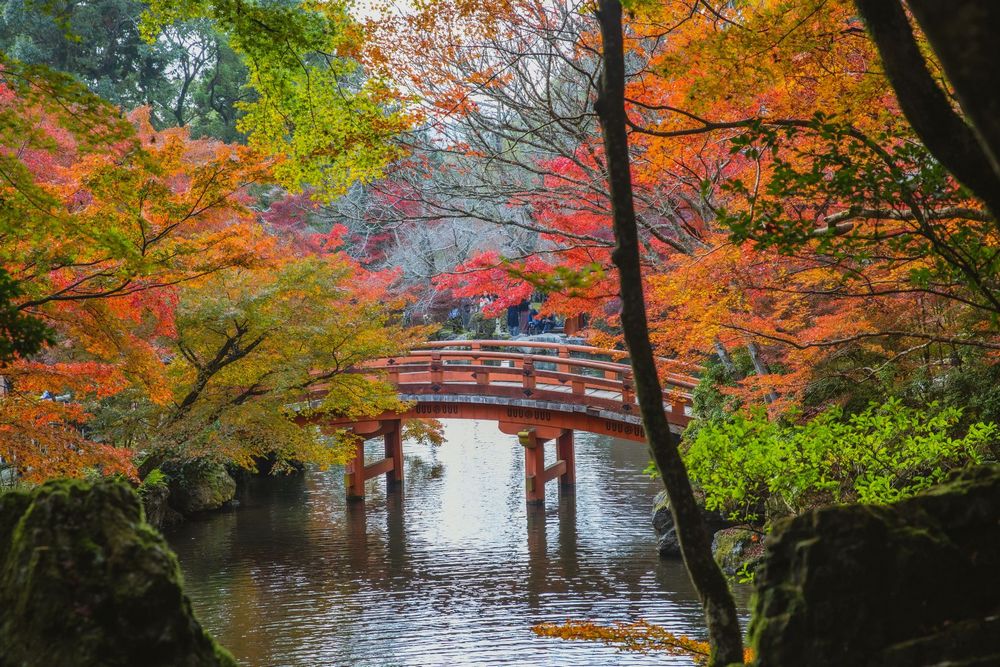 Take away those elements and you take away the Japanese garden.  They are the sine non quon of this blending of art and garden.  Color me jealous! 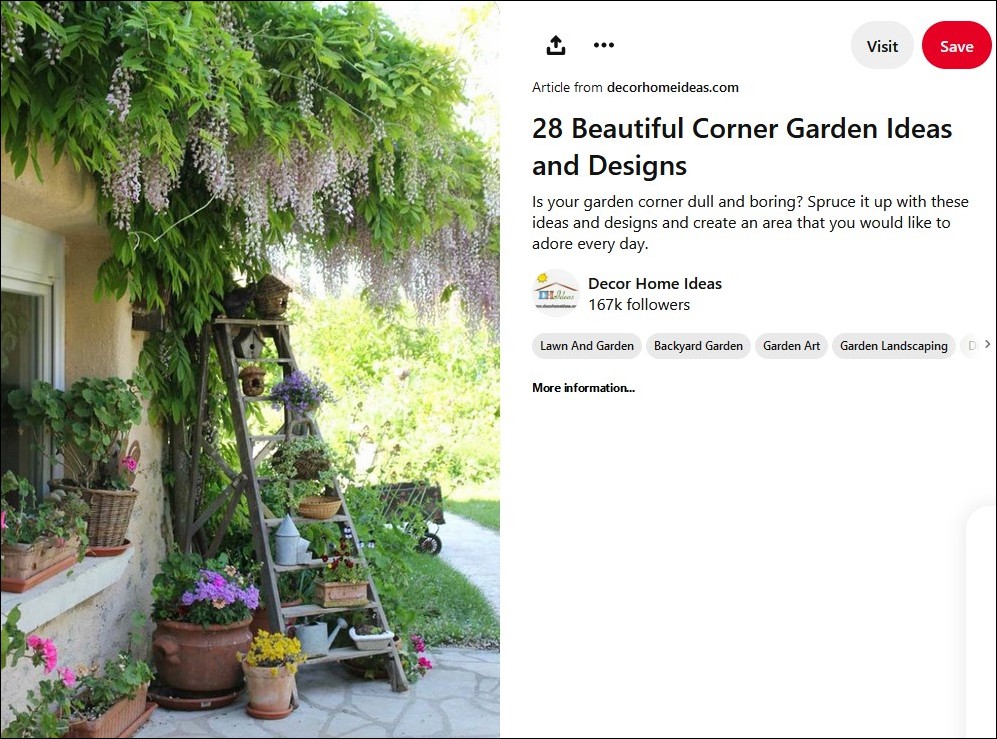 Rusticity is possibly the most common form of decorative arrangement, at least in informal gardens. I say that based on what I see on Pinterest (and I’m a Pinterest Slut with thousands of pins on Da Missus’ Pinterest board). The most popular ornamental image re-pinned by others from my portion of her board is of a ladder with potted plants on the rungs. Variations of this theme include watering cans with pouring crystal “drops,” painted bicycles with basket planters, and children’s wagons with pots and decorated birdhouses. 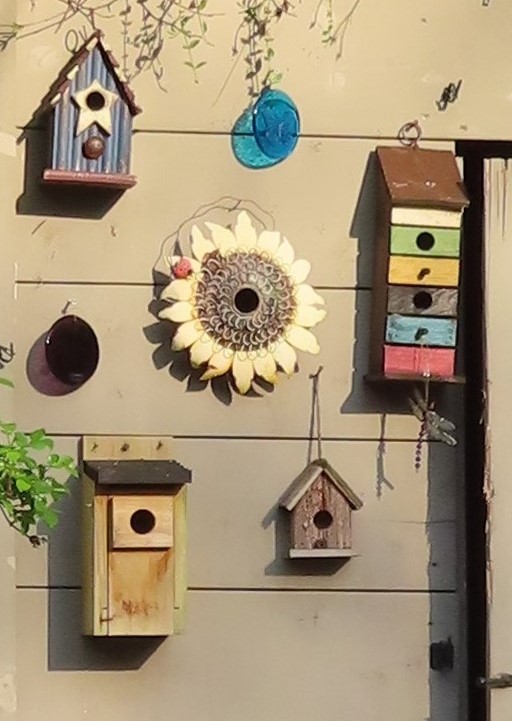 More rusticity – bird houses in my own garden.

Another option is to use things you really like but are embarrassed to admit to liking. For example, if you’re driving a convertible, stopped at a stoplight, blasting “Baby Hit Me One More Time” by Britney and a car pulls up beside you, you might immediately turn down the sound.  Or, if watching TV, you quickly change channels when someone walks in while you’re enjoying “Cops” (“Bad boys, bad boys, whatcha gonna do . . .?  (Ear Worm warning!) 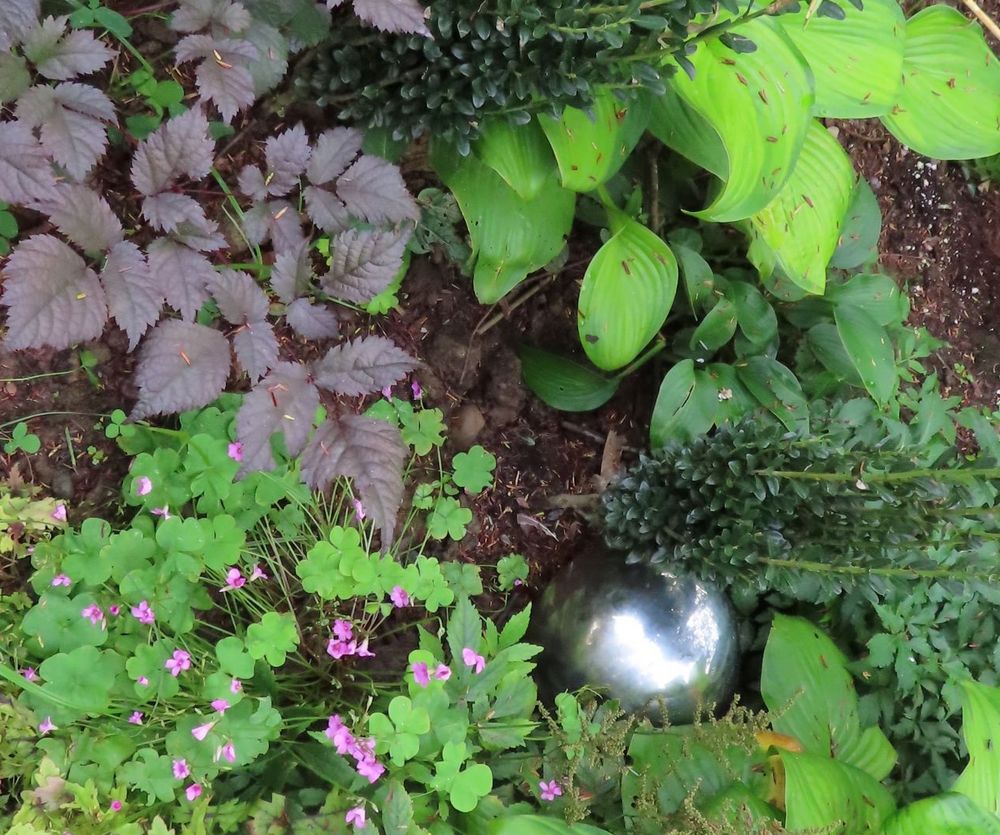 My guilty pleasure is silver gazing balls.  I’m part crow . . . attracted to shiny/sparkly things . . .  but with refined tastes.  I like the polished balls nestled among foliage where they reflect their surroundings. 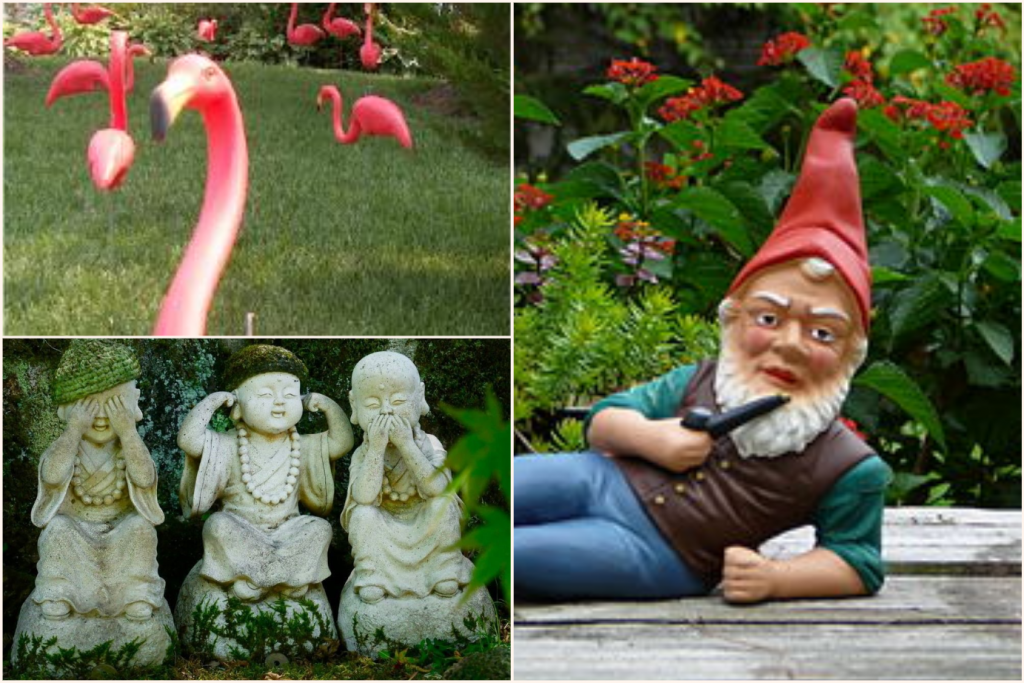 Do you have guilty pleasures in garden ornamentation?  If so, you can explain them away by telling visitors that “They were a gift from my favorite niece.”  It also helps If you have a niece.

So Readers, do you have any non-functional ornamentation in your patch of paradise? Spill!

About the Author: John Moore

John Moore is a retired healthcare attorney.  He and Joni, (also known as “Da Missus”), have been happily married for 45 years.  They live in Charleston, WV and have raised two nicely settled daughters.  John gardens and Joni reads and knits, both trying to spend the daughters’ inheritance on plants, books and yarn.  John has now de-lurked from being a faithful Garden Rants reader to share some thoughts about our behaviors as gardeners. 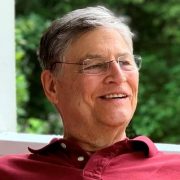