Lilacs in the darkness 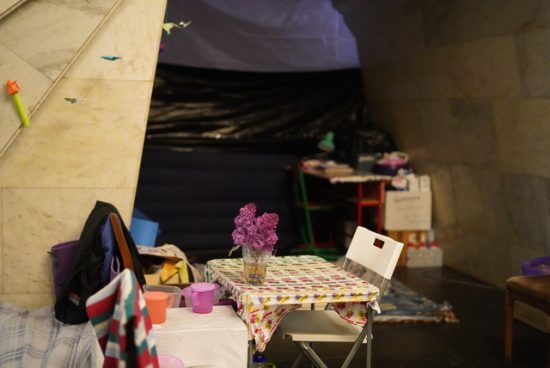 Flowers can bring consolation sometimes. It depends on the situation. Recently we were sent a number of pictures from an organization that we support: Pizzas for Ukraine. We like it, because it’s simple and we see the results. We send money, which goes to someone in the US who batches the money into pizza orders and dispatches the orders to two Kharkiv pizza places. They bake the pizzas, and deliver them to bomb shelters, emergency rooms, fire houses, and other appropriate locations.

Our Pizza for Ukraine guy also sends us reports with images of people holding pizza boxes, as well as other shots of life in Kharkiv. A recent shot (excuse the low quality of a much-forwarded image) shows a vase of lilacs in a subway bomb shelter, a commonly used refuge for Kharkiv families. These makeshift shelters host classes and play areas for the children. And sometimes flowers.

I think if I had to eat lunch in a subway bomb shelter, I’d be cheered by a vase of flowers on the table. Lilacs are nostalgic, old-fashioned flowers. Many gardeners treasure underperforming lilac shrubs because they remind them of childhood scents, of the gardens of their mothers and grandmothers.

But I also think of these words from Walt Whitman:

O death, I cover you over with roses and early lilies;
But mostly and now the lilac that blooms the first,
Copious I break, I break the sprigs from the bushes;
With loaded arms I come, pouring for you,
For you and the coffins all of you O death

Whitman wrote “When Lilacs Last in the Dooryard Bloom’d” as a deeply felt but conflicted elegy for the death of Abraham Lincoln and the violent death that he had seen in the Civil War. As symbols, flowers share in that conflict. The lilacs in the Ukraine bomb shelter could be seen as a sign of life’s resilience; they could also be seen as standing in for all that is forever lost in war.

Though my garden is mainly green right now—and I have no lilacs—I see flowers every time I go to a local news website. Flowers are piled high near the Tops Market on Buffalo’s East Side. Still in plastic wrappers, for the most part, they’re interspersed with teddy bears and other symbols of comfort and sympathy.

The flowers at a mass shooting site can mean all kinds of things, even anger and protest. Certainly, pain. But mainly, they draw the eye. This happened here. Flowers can’t do much, but they can mark a spot of sadness in a way that can’t be missed.

I can’t take a picture of those flowers. But here are the lilacs.