An ode to mulch 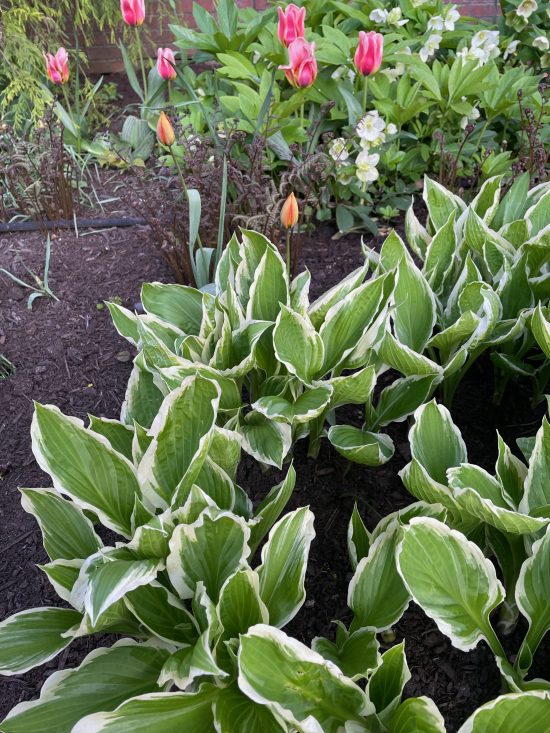 It was serendipitous. For a few weeks in mid-spring, my garden is the tidiest it has ever looked, thanks to an application of mulch/compost that gets put down at the beginning of every gardening season. All the winter detritus magically vanishes, leaving spring bulbs, spring-flowering perennials, and the fresh green emerging foliage of summer perennials, set off by their dark brown backdrop, which looks black, though it’s not. This doesn’t last long, nor would I want it to, but I was just admiring it when I turned to my phone and there was a New York Times column by Margaret Roach in praise of mulch.

It’s an interesting column which comes down in favor of the dark, finely shredded product I’ve always used, mainly for looks, but Roach also notes that, because it’s aged, it’s less likely to steal nitrogen from the soil (a controversial issue in horticultural circles). She prefers it for formal beds; so do I, and, given my urban courtyard garden and the surrounding architecture, all my beds are formal. I can’t use shredded leaves as many do; Roach employs these in her vegetable beds.

I won’t repeat the whole article—I heartily recommend a subscription to the Times!—but there is also a good explanation of how mulch can build soil from Roach’s expert, horticultural professor William C. Fonteno, of North Carolina State University.

Here’s one final quote: “Mulch contributes to weed control by blocking the light that some unwanted species need to germinate. It also forms a barrier that prevents weed seeds from getting a foothold.”

Sounds simple, right? But I rarely hear gardeners talking about mulch to control weeds, at least not around here. They’re mixing soap with vinegar, they’re pouring boiling water, they’re laying down cardboard and tarp. They’re not pulling and mulching. I have been doing that for years and have seen significant weed reduction.  In addition, my perennials have been able to spread into mulched areas, which doesn’t present the same barrier as cardboard. And isn’t stupid, like vinegar.

Over the years that I’ve been mulching, I have less and less need to do it, as the areas between plants have grown smaller and smaller. I may temporarily admire the dark backdrop my plants now have, but I wouldn’t want it all season long—and I don’t have it. (The hostas shown at top will cover that space completely.) Also over the years: I’ve noticed that the soil where I’ve mulched is easier to get into.

I don’t know if this was the point Roach wanted to make, but the thing I like about mulch is that the more I do it, the less I need to.