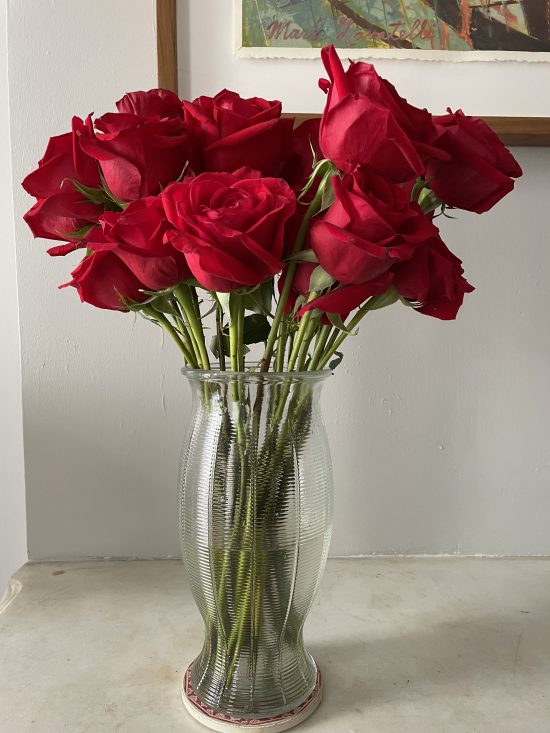 A day devoted to spoiling people you love is okay with me, regardless of its Hallmark stigma and general aura of cliché. Just like the extra information at the public gardens, it can be ignored if it really bothers you. (Though 2/14 is a bit tougher to ignore.)

I’m fine with it. My husband and I have developed ways of observing it that are not much effort and fun: a special dessert, a poem or two. And sometimes, one or more red roses wind up in the house. My late boss used to give each female staffer a red rose; I would usually bring mine home. I still have many of the little bottles and vases they came in and often use them. That tradition ended with him, and we only occasionally buy red roses now, mainly because the roses in stores and from florists are always so terrible. 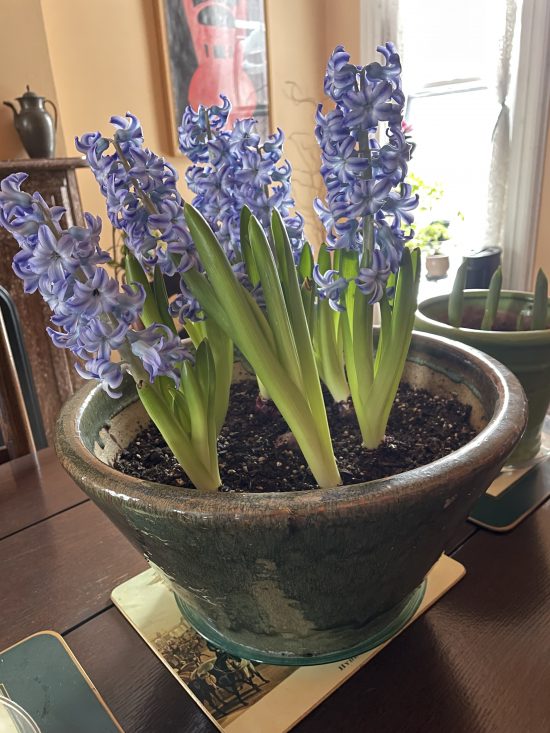 The only positive—and it’s substantial—about the bunch shown above, which I purchased on a whim as part of a Whole Foods order, is its deep, vibrant red. That’s it. They have the usual faintly musty smell; you don’t expect much fragrance from a hybrid tea, but you’d like it to avoid outright unpleasantness. These roses provide very little of the pleasure one expects from fresh flowers—unlike the graceful tulips I also bought, or the hyacinths I have coming into bloom from my own forcing program (some shown above). You’d almost be better off with silk flowers when it comes to out-of-season roses. I grow my own roses, mainly David Austin varieties, but I can rarely bring myself to cut them and, in the summer, the urge for cut flowers isn’t as strong.

These red roses come from Ecuador, which has a huge flower farm industry. They will never fully open because they’re not supposed to. They are picked open half-way and treated to stay in that state. Having read about Ecuador’s roses in Rant co-founder Amy Stewart’s excellent book about the cut flower industry, Flower Confidential, I assume these are not the huge, premium luxury flowers she saw on some the farms there. They are better than other supermarket roses I’ve seen, though, which isn’t saying much. Whole Foods provides information about its Sourced for Good program and how it helps these farmers on its website. I can’t speak to the veracity of any of it.  I do know that these flowers are sprayed and dipped and maybe sprayed again at the end of their lengthy journeys to American markets. As Amy remarks, “There’s nothing romantic or sentimental about toxic pesticides or underpaid workers.” Whole Foods does link to an array of certifications and Fair Trade policies that might indicate that chemical use might be slightly alleviated for these flowers, but, as Amy also points out, the American market as a whole looks mainly at price and shelf life.

It was a whim. And they’re beautiful in their way. But it’s not a whim I’m likely to indulge in again.