Fake Plants Saved My Tablescape, and My Bathroom

Fake plants have come a long way over the last few years.

There’s a chance that these words issue from the disturbingly hazy standards of my middle age; but though I must fumble for the 1.75s, I can still recognize a ‘silk’ flower for what it is – an anathema to God and all his angels – and I can still boast of a contemptuous but involuntary reaction to the first three aisles at a craft store. 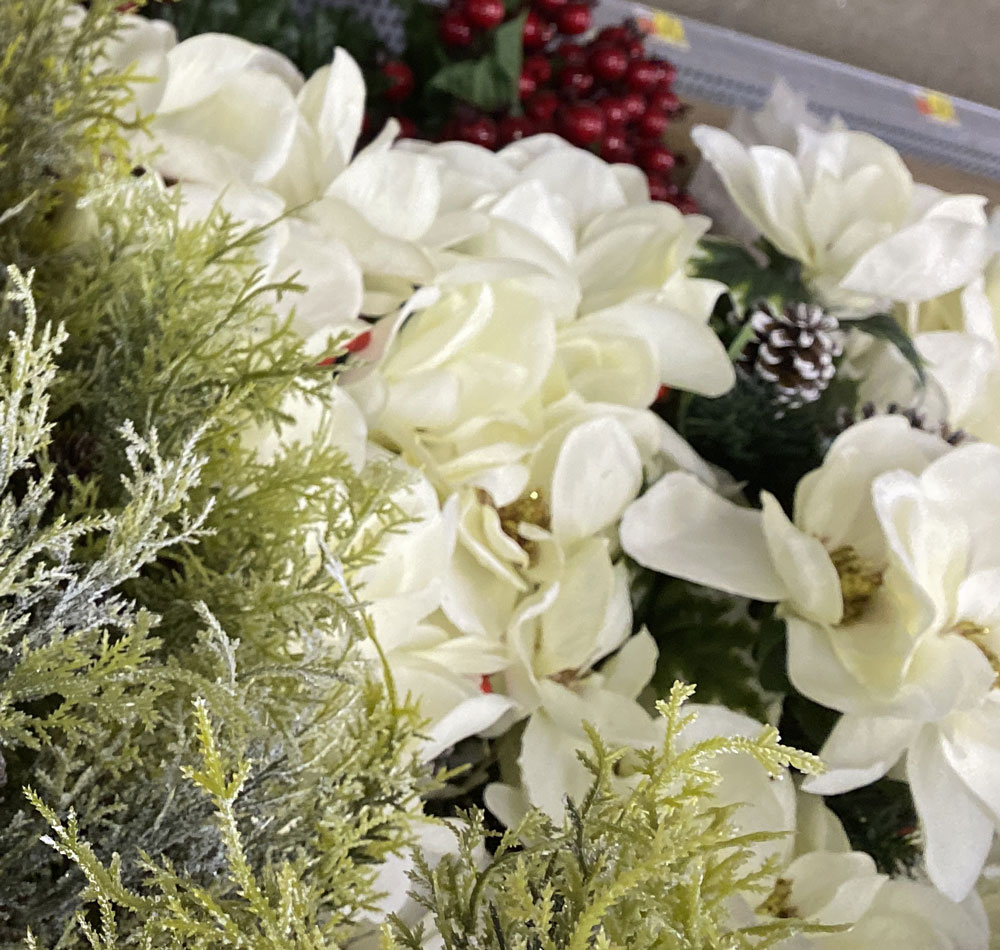 So that’s where I’m coming from. That, plus decades working with the real things, are my credentials in penning this piece. And yet, I’ve found myself fooled.  And now, I’ve become a user.

Last month I was fooled by a phalaenopsis orchid in a Costco of all places, and admittedly I was hopped up on egg nog and good cheer and throwing must-have items in the cart like writing pays well. But I was fooled from 20 feet. Then from ten. Then from five feet.

A pause to fumble for the glasses. At two feet I reached with gloved hands for the slightly underwatered foliage, cleverly evidenced by a slight puckering in the strong waxy leaf.

Strong. Waxy. Proof of life. I shrugged and assumed they’d been segregated from their fellow plants for some unknown marketing reason – displayed near bread and batteries to encourage the spirit of discovery in the midst of the suburban shuffle.

It was the lines on an unopened bud that gave the game away.  Nature doesn’t work such miracles through plastic injection systems.  But it had me – really had me – for longer than I felt comfortable admitting.

Until the next time. 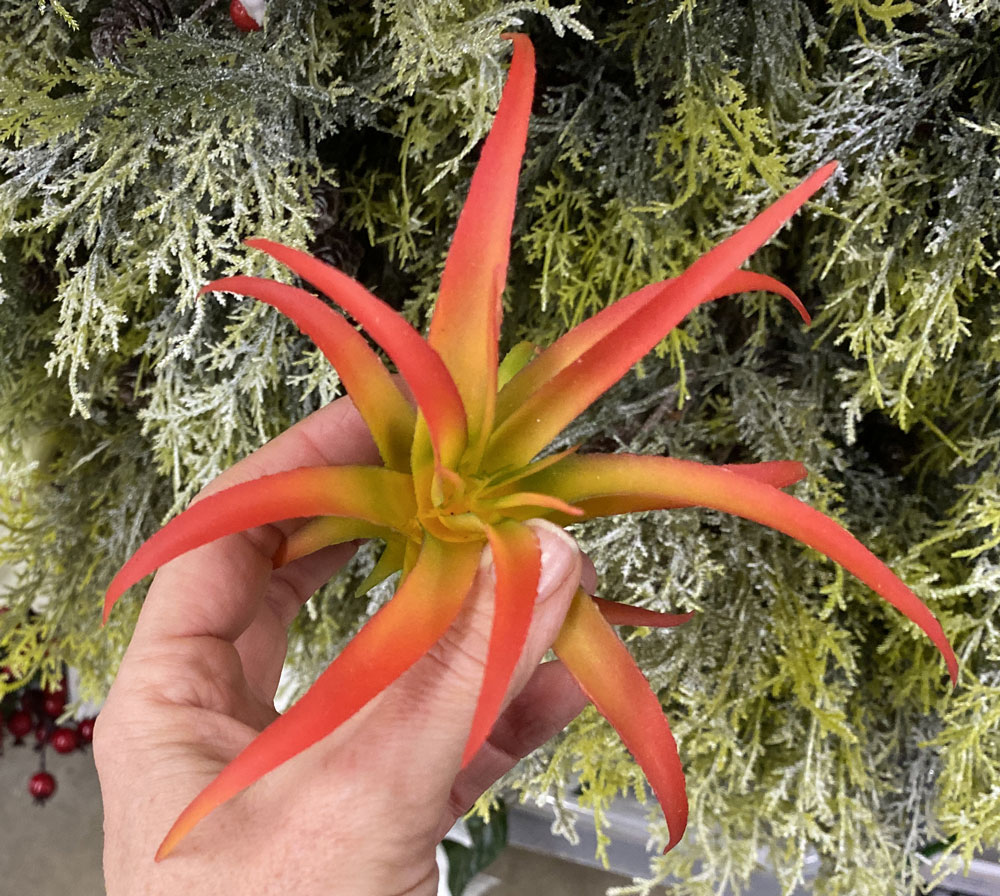 Mid December.  A plant friend’s birthday and a new dining room space inspire me to create shock and awe on top of a table, and dammit I want tillandsia.  I want lots of tillandsia.  Tillandsia I cannot afford.  Tillandsia I cannot, as it happens, even find to decide that I cannot afford. Poinsettias and carnations dominate the local floral scene, and I’ve left it way too late for online shopping.

So I’m ruminating about this as I wander the aisles of a craft store where I go to find wooden spoons that will double as plant markers in an edible potted dessert.  I find myself in the fake plant aisle.  The old familiar feeling of possessing superior taste warms my heart as I contemplate how to create potting soil with Oreos. The irony is not lost on me. 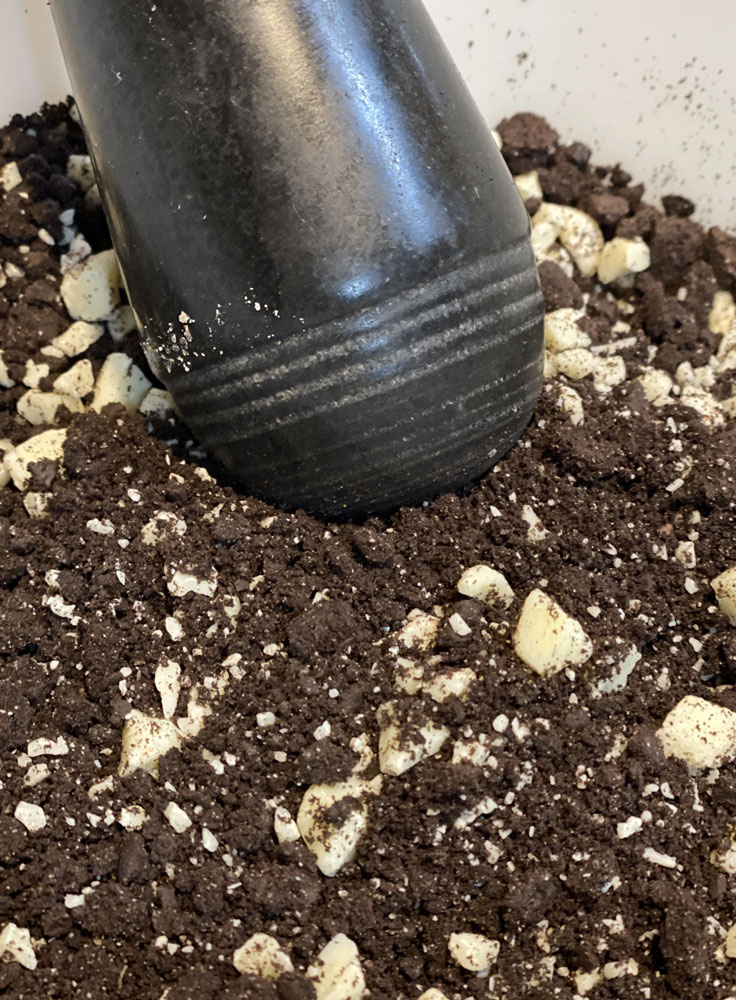 Oreos and white chocolate. Tasted just as good as it looks.

And then suddenly, a temptation from the dark side.

There, in the midst of neon echeveria (why God, why?), and purple spotted haworthia, is a ridiculously good replica of that Terrain air plant darling – Tillandsia xerographica.  I pick one up and inspect it carefully, glasses perched on tip of nose, look of scorn at the ready.  I can’t deploy it.

It’s good.  It’s really good.  And next to it, a whole basket of T. ionantha, and several larger-than-life T. velutina that would look really good in my dark basement bathroom, to hell with the party.

So I buy them.  There’s the usual 50% off overpriced suburbia merchandise sale, and I’m still hopped up on good cheer, though the egg nog has worn off, and I get them home and dim the lights and throw them on the table along with a million baubles and suddenly think, hmm…maybe I’ll make sure the plant nerd birthday girl who works with these things every day is seated in front of the real one I just pulled out of the kitchen. 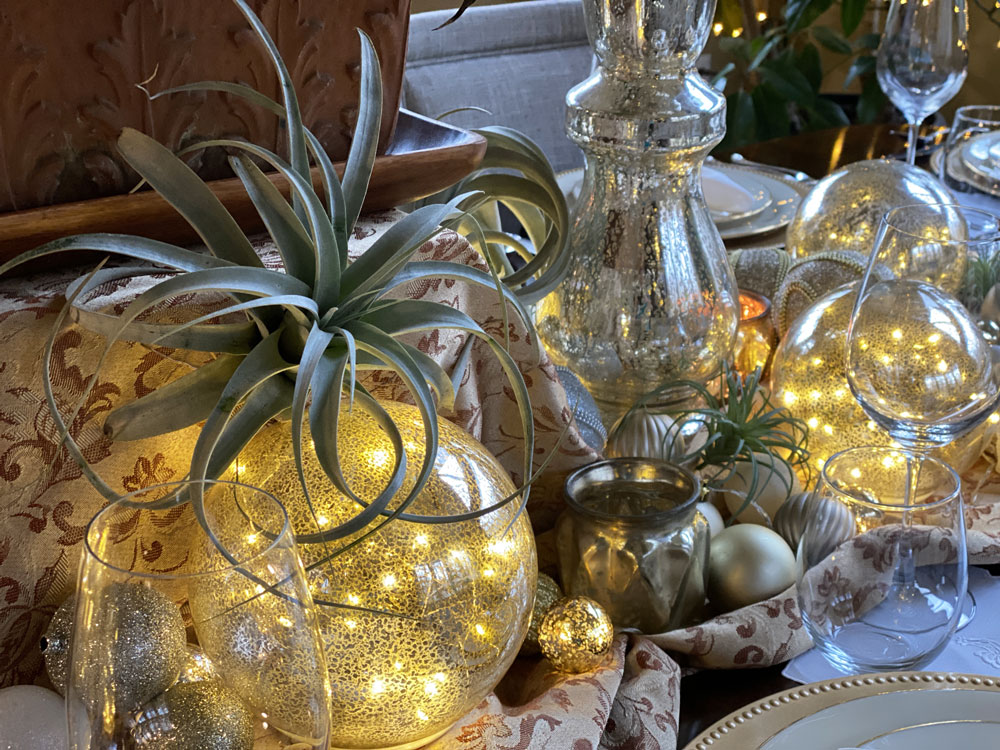 The real thing sits next to the fake thing, as the light starts to dim…

Except parties don’t go that way without cute table seating assignments, and that’s a bridge too far on December 18th with seven days till Christmas and a meal for twelve to prepare.

And so, my friend ends up seated directly in front of the fakery.  And she is too far away from me at a long table to receive a good-natured aside on the transgression of fake plants and the tricks of a desperate tablescaper. Dinner is consumed and my horticultural sin is surely laid bare. 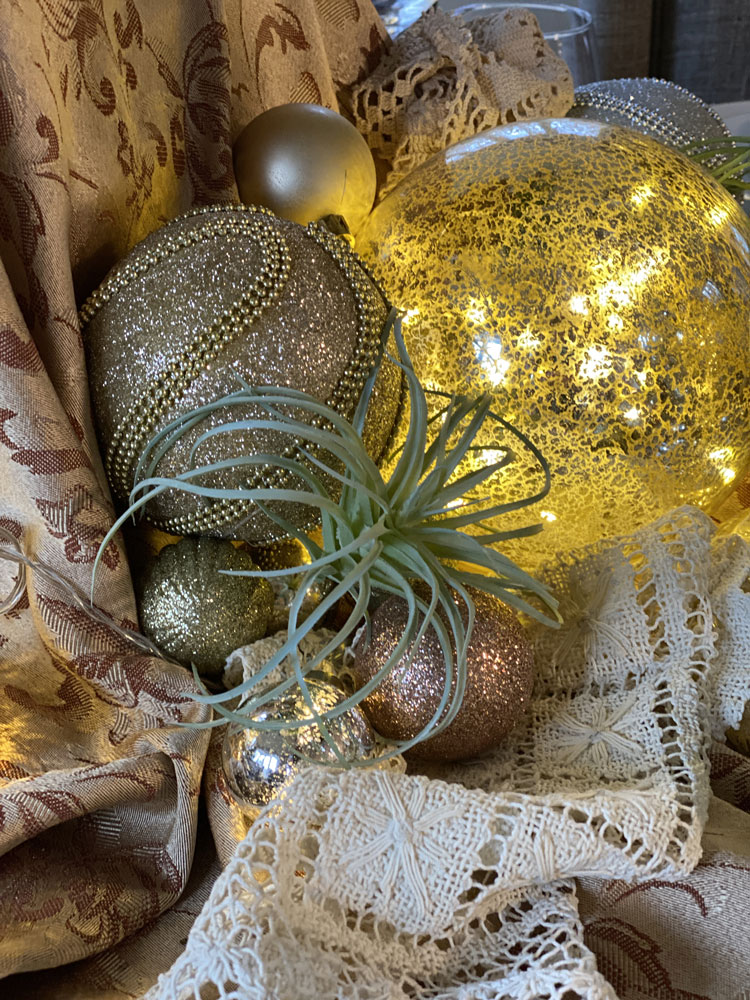 Will she catch it?

The guests finish their edible potting soil and migrate towards the fire and guitar cases, and my lovely, fêted friend comes to nestle next to me. It’s the first thing on my mind and I guiltily confess.

No need.  She thought they were real, and never picked them up to examine more closely.  Moreover, she floors me by telling me she’s been thinking about buying some of the larger high-end artificial bromeliads for difficult spots in her own yard.  The places the hose won’t reach.  The dry places and dreary places that make her weep. The places where a strategically placed bit of unexpected shock and awe in a container might fool the average visitor and add to the quirkiness of an otherwise richly diverse garden. 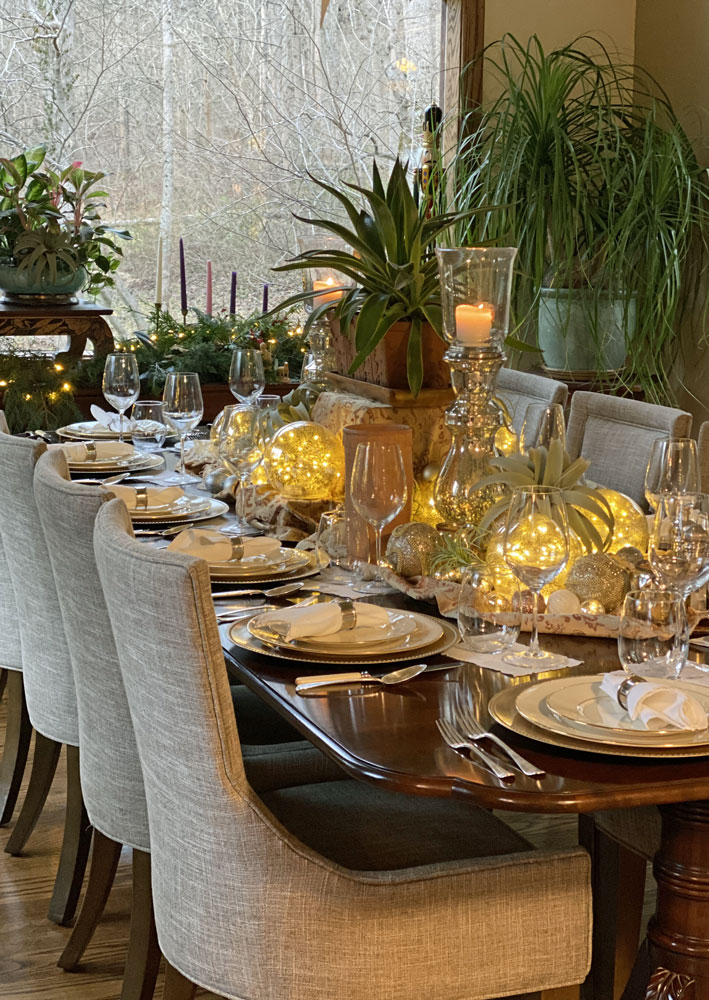 Reality and illusion are part of most tablescapes – why not good old fashioned fakery?

Her confession reminds me of another – that of a professional container gardener from Philadelphia conducting a class several years ago. He used high-end artificial berry sprays to pepper containers of real evergreen boughs to keep the winter cheer going throughout a cruel season. Up until that point I’d never looked closely enough at the bountiful containers in cityscapes to realize that most were a mixture of nature, talent, and illusion.

You had me at high-end…

So I’m sold.  But there is a caveat.  Well, a couple actually. Though the orchid fooled me for an egg-nog induced moment, as far as I can tell from browsing the aisles – both suburban and sophisticated – and reading quick-fix articles such as this one from The Spruce, the best fakes are bromeliads – particularly gray-foliaged Tillandsia. 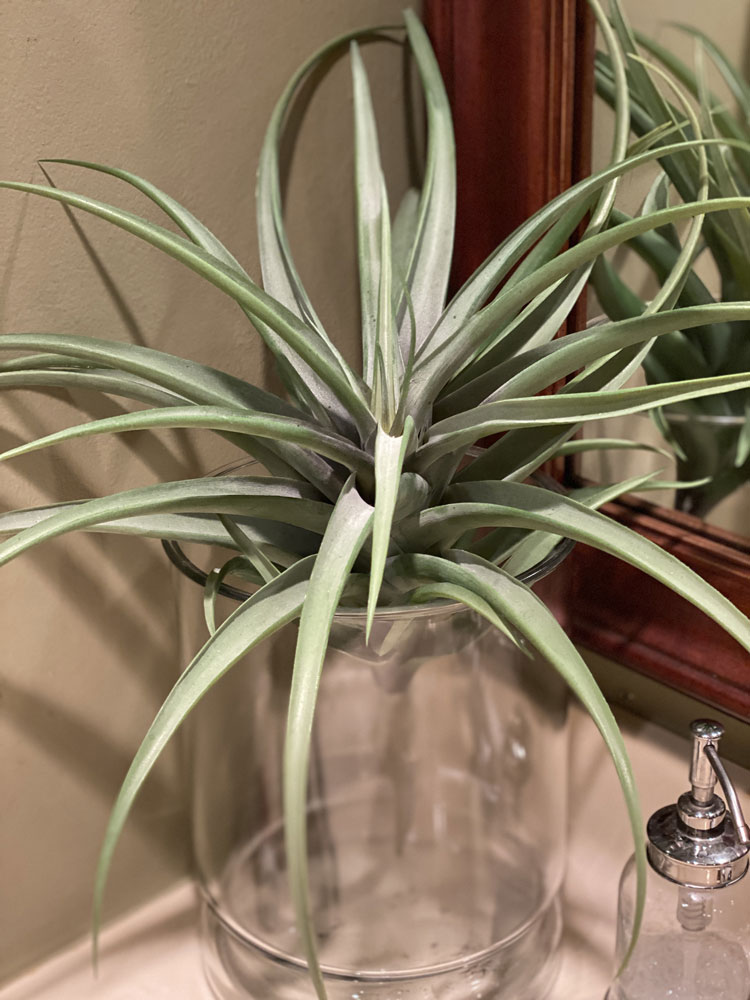 Now to keep it dusted….

They (whoever ‘they’ is) have got that particular family down.  And, in a family that contains Guzmania (the plant that tragically spends its entire life looking artificial), I suppose it makes sense – though The Spruce article on fake plants completely leaves them off the table in favor of fiddle leaf figs (yeah, no) and spiny aloe.  Succulents run a close second to bromeliads in my estimation, but it only takes another two seconds to realize you’ve been hoodwinked.

The second caveat: plastic waste.  And it’s a big one, as I don’t like to encourage the manufacture of yet more layers of non-biodegradable junk heading for the landfill. But in a home that composts, hangs clothes up to dry, buys used and in bulk, combines errands and re-uses potting soil (even eats it on occasion), I feel okay splurging on a few interior decorations that will enhance my current collection of the real thing, and be carefully cared for in the long term.  Unlike my friend however, I’m iffy on giving them a summer vacation. We’ll see.

There’s now a large velutina in my dark and dreary guest bathroom.  The xerographicas are spending the winter in a birdcage in the dining room (which veils them from harsh sunlight and harsh critics), and a few ionanthas are hanging out in the leaves of the schefflera.

And I can’t wait to fool my next plant person. What do you think?

Things to consider when swallowing pride and choosing fakery: