Tis the season for houseplant anxiety 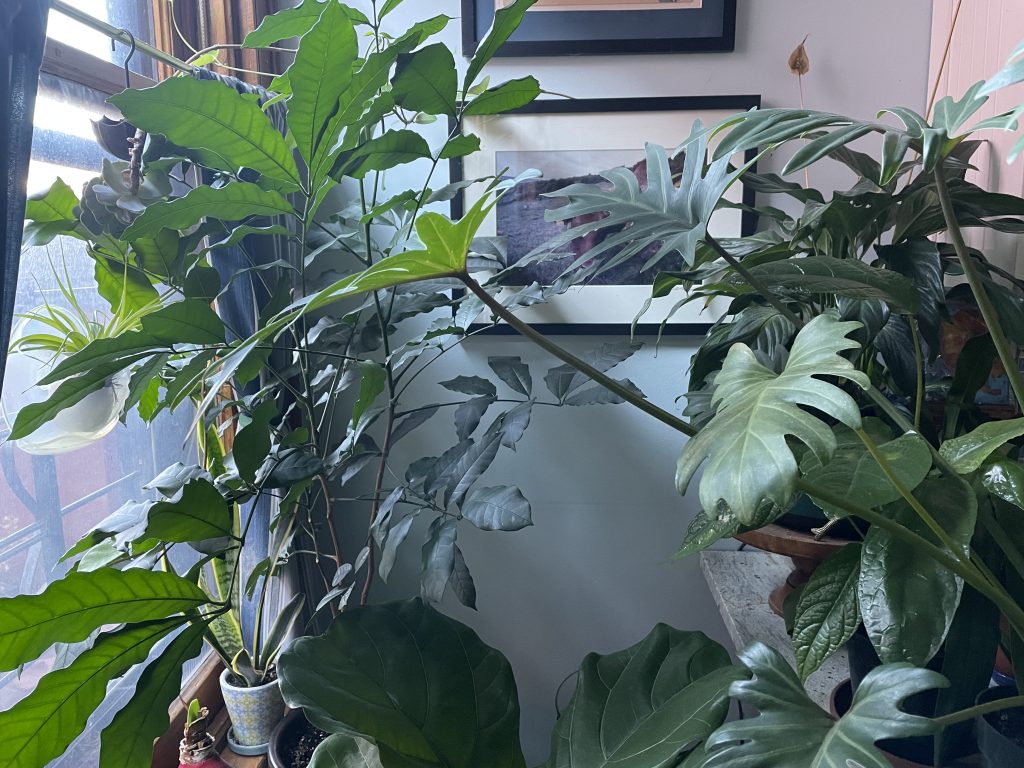 We’re getting better at choosing outdoor plants that resist drought and disease, and we try to maintain insect-friendly gardens that would only be hurt by human intervention in the form of sprays. I can get through the outdoor gardening season with intermittent weeding, watering, and deadheading, once the initial work of late spring is done. When visitors come though during Garden Walk, saying “A lot of work!” I can murmur, “Not really” with truth.

Inside? Not so much. Indoor plants have a way of making it very clear that this is not their natural habitat. I have about 70—which is nothing, nowadays—and I wouldn’t be without them, but I occasionally find their neediness annoying. I am not a “plant parent,” nor do I give them genders. Each is and will always be an “it.” But they do have beauty and they do bring much-needed green life into the house.

Watering. Once the heat starts blasting—and you want it to because it’s 20 degrees out—they’re going to need more frequent watering and the ones in the smaller pots will go south fast. Sure, you could focus on succulents, but I can only tolerate a 10% succulent ratio.  Humidifiers need to be going wherever the plants are—in addition to the furnace built-in—and they require frequent and tedious refills. Also, there are two people watering the plants and they seem incapable of coordinating their efforts. It’s amazing we haven’t killed more than we have.

Pests. I have triumphed over fungus gnats with the help of BT, a mosquito control that can be watered in. No need for unsightly yellow sticky traps. But scale will always be with us, and, in the case of a big infestation, I’m more likely to toss a less-treasured specimen. To defeat a persistent infestation requires a big effort, including quarantine and repeated treatments. It’s rarely worth it, because there is a least a 50% chance they’ll be back. Also, it’s just kind of horror-show scary to see a big plant in your living space covered with creatures. I’ve thrown a full-size oleander (overwintering it) out the back door into the snow for that reason. It had mealies all over it. Yech.

As for the rest—weird blotches, unexplained wilts, leaves splitting in half, edges browning—a few quick snips usually suffice. If you eventually snip the entire plant away—well, maybe it just wasn’t meant to be.

All that said, I will likely be buying a few more before winter’s over.