The AAA of Autumnal Adventure

If pushed to admit it, and without ranting too much, autumn is my favorite gardening season, maybe about two horticulture notches ahead of spring. It is a close call; a welcome spring does follow a long winter, but then basketball is over and I gotta start mowing the grass again. 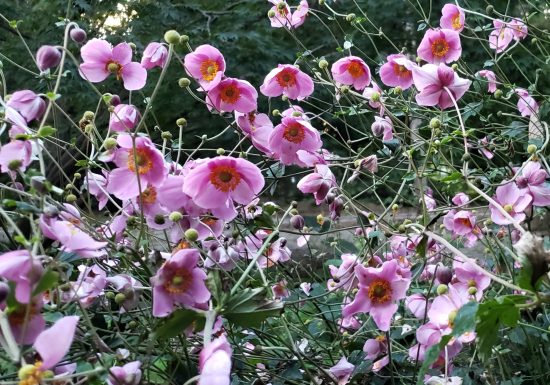 Fall wins my soul because it follows sweat-drenched summer.

Come that first crisp, clear, sunny blue day I just want to hang around outside, wander and wonder, find joy in just being alive while anticipating the tumbling-down red, yellow and burgundy leaves that come with it.

Hell, I even like to weed on those days; the soil often moist, the weeds easily yanked and the satisfaction in looking back at bare ground ready for spring planting. 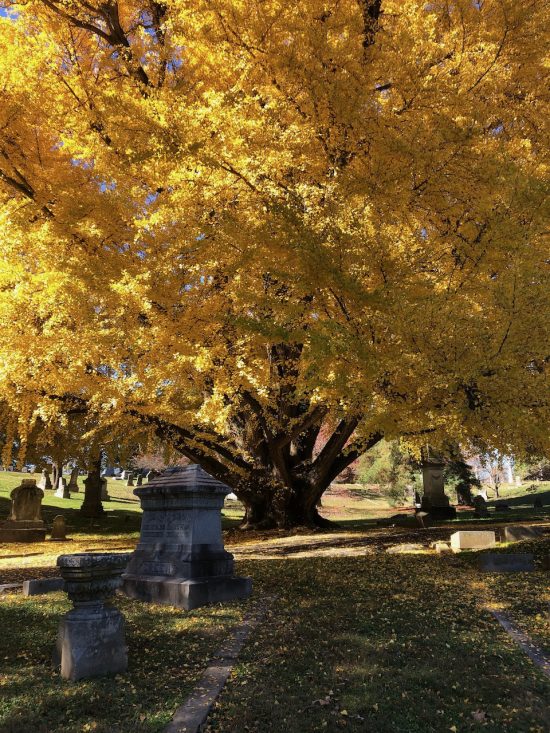 If you have a ginkgo tree – and play that first frost just right – you can stand beneath its magnificent limbs as its golden leaves shower down upon you, all of them suddenly released and falling that same day; a tree as impatient to get on with the cycle of life as your average gardener.

So, OK, we gotta rake up them leaves and shove them into big, non-biodegradable plastic bags. My answer to that is go start a compost pile.

Fall also brings three of my favorite flowers to life, the AAA of autumnal adventure, the allium, anemone and aster.

The season brightens their colors—and they know it. Understanding they are among the last of the year’s flower parade makes them more appreciated—and we know it. The fact that each is easy to grow, versatile and fairly well behaved—the Japanese anemone a little bit of an outlier – just adds to their appeal.

So, let’s take them in alphabetical order:

ALLIUM—In common parlance the allium is a genus that includes hundreds of species, among them onion, garlic, shallot, leek, and chives, some available at Kroger. It allegedly symbolizes unity, good fortune, prosperity, humility and patience, although given its odor you might have to hold your nose in the process of reaping your good fortune.

Ornamental onions are also great favorites in the garden, among then the giant spring and early summer monsters such as the ‘Globemaster” which rises an almost threatening two-to-three feet in the air with huge purple flower heads that declare victory over other puny perennials.

But we speak today of early autumn and another ornamental onion, the Allium ‘Millenium.” I was aware of it but had never grown it, found a couple pushing up their clumpy, green grass-like leaves in a favorite nursery in northern Illinois in late September. They looked lonely, needing to be in the ground.

Allen Bush was suspicious. He said his Allium ‘Millenium’ had flowered 6-8 weeks before in his Kentucky garden. Furthermore, the blooms didn’t look quite right. He suggested throwing the question to the clearinghouse on Facebook’s “Plant Idents” page. The plant cognoscenti gathers here to sort out taxonomic questions like this. The answer came back: Allium thunbergii, perhaps the late-flowering cultivar ‘Ozawa’. 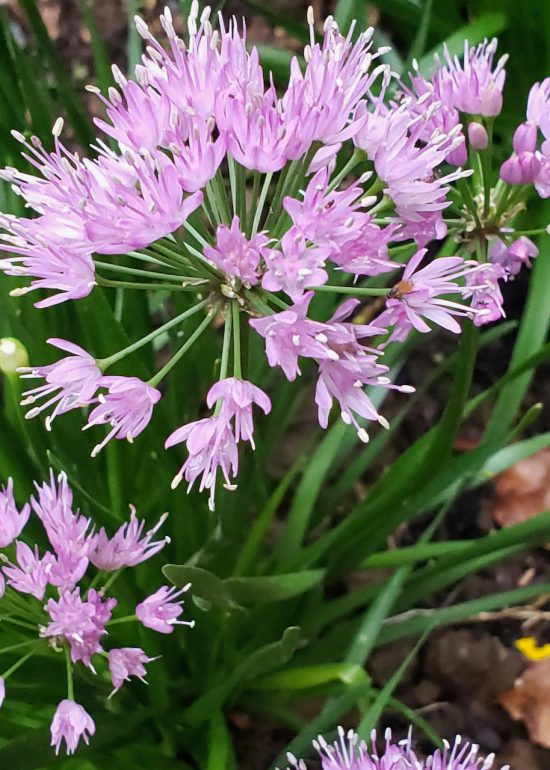 You decide… Allium ‘Millenium’ or Allium thunbergii ‘Ozawa’. You can’t go wrong with either.

The result, regardless, was a late September push of very appealing, rose-purple, 12 to 14-inch florets that are very useful in fresh cut arrangements, albeit with an oniony smell and taste when cut or bruised.  I have never tried one with a hamburger – I’m more a ketchup and mustard guy – but it should work for either ‘Millenium’ or Allium thunbergii.

Either plant can easily be divided in late fall or early spring, guaranteed to bloom every year with sunshine and water and will be a star in the front of any perennial border or rock garden.

JAPANESE ANEMONE—This is a plant, given enough time, that will literally rise above almost anything else in your fall garden. Actually a native to central and southwest China, it grabbed the name Japanese anemone – a-nem-o-nee- a few hundred years ago and never looked back.

I love this plant. It will stretch four-to-five feet tall on slim but durable stems that way in the breeze, prefers part sun but must have continually moist soil. Its buttercup-like flowers come in pure white, all shades of pink, rose and bubblegum and will bloom for weeks, often deep into autumn.

Can it be too tall and invasive? Yes. Do I care? No. I just let its thing every autumn, spilling up into our sidewalk, well-watered from overhead downspouts, and how often do you literally get to walk among your flowers, your fingers touching the petals on the way past. 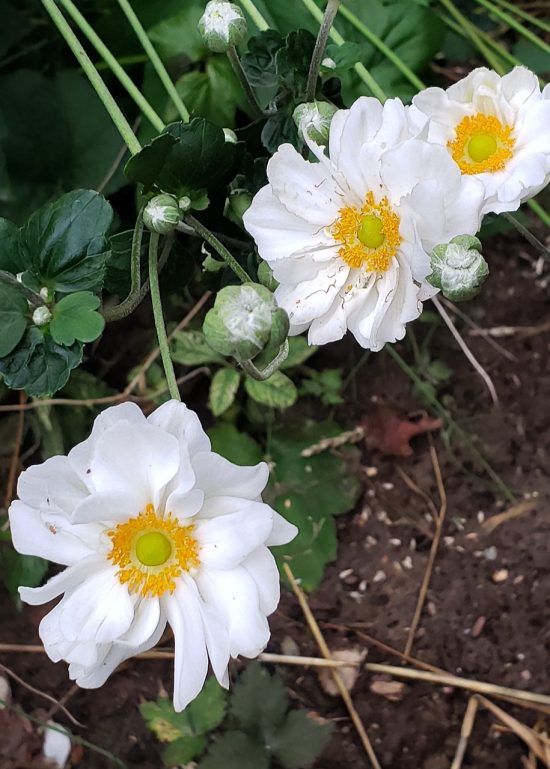 Next spring, I will take an hour, or so, and thin them out, perhaps starting anemone beds in other places. The bees love them. Other pollen-seeking insects adore them. I planted the first of ours about 25 years ago. They took their time getting started. Then they owned the place; their place. Well worth the wait.

Aster—In autumn mums is not always the word. In fact, roughly 99.5 percent of those millions of mums now lined up for black-potted miles outside grocery and box stores will be dead by December. Tossed in garbage. Forgotten. Replaced, maybe, by Christmas cactus. Or not. 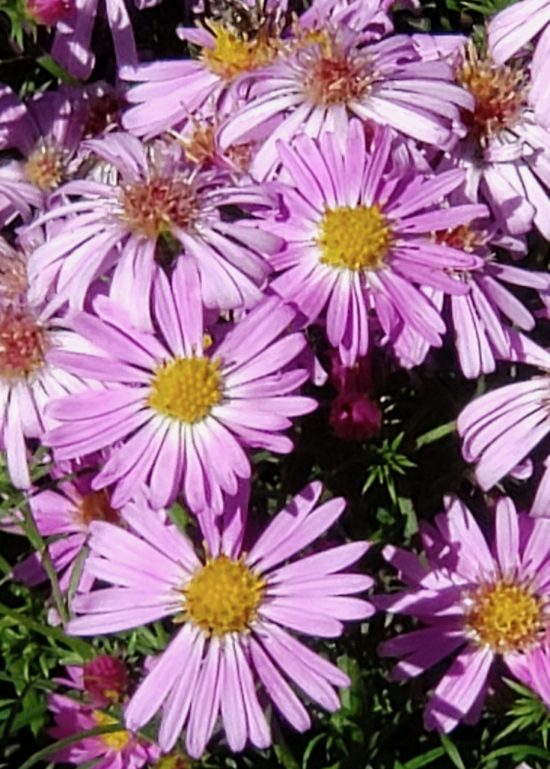 Not so with asters. Which in one case – ‘Raydon’s Favorite,’ a purple-blue, very hardy lovely, comes with a local story. In 1991 a south Texas plant lover, Raydon Alexander, sent to Allen Bush, a ranting Louisville plant guru then operating a nursery in North Carolina, a pass-along aster that may have had its roots in eastern Tennessee but had done well in Texas heat and cold. 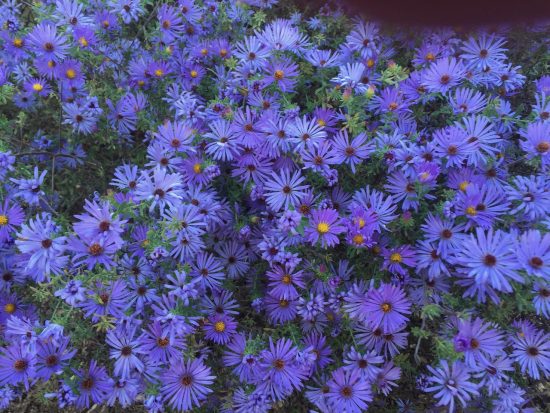 The plant went commercial – with reason. Unlike those grocery store mums, Raydon’s Favorite is tough, lovely, shorter than many with proper pruning and always returns. Try teaming it up with ‘Woods’s Pink’ aster, a tough, pink dwarf that will bloom into late fall and has no interest in joining the compost pile either.

Can spring be far behind?

Former Louisville Courier-Journal columnist Bob Hill wrote more than 4,000 columns and feature stories, about ten books and several angry letters to bill collectors in his 33 years at the paper. He and his wife, Janet, are former guides and caretakers of Hidden Hill Nursery and Garden in Utica, IN., a home-made, eight-acre arboretum, art mecca and source of enormous fun, whimsy, rare plants and peace for all who showed up. Bob’s academic honors include being the tallest kid in his class 12 years in a row.