Virtual GardenComm Conference was So Good, I have to Eat my Words 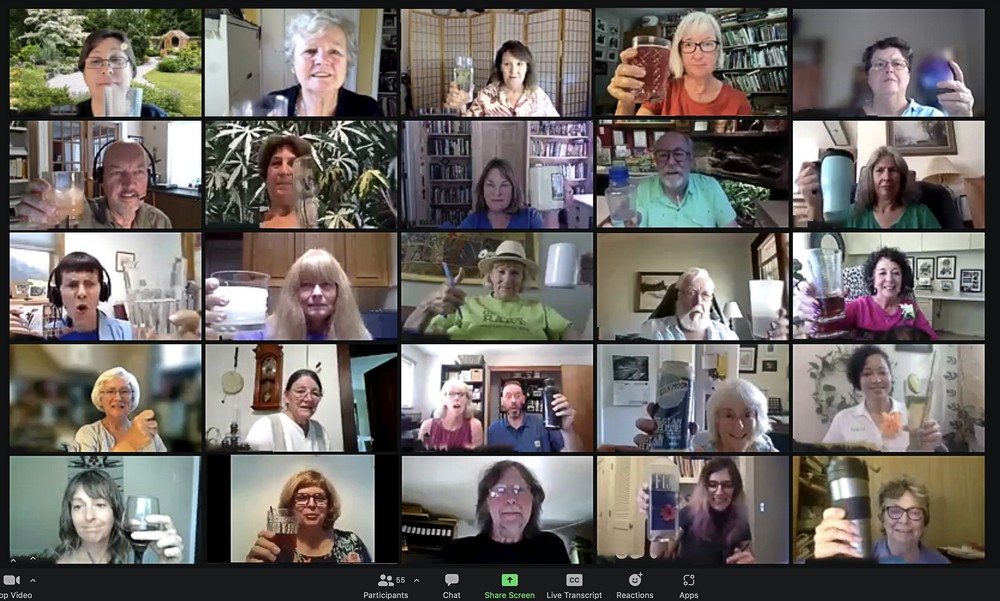 Conference-goers raise their glasses in a toast during the After Party. I’m in the center box wearing my GardenRant t-shirt and performing a weird thumbs-up with pen in hand.

For months I whined about the 2021 GardenComm symposium being online – again. I was SO looking forward to driving from Maryland to Williamsburg, VA and getting a big dose of in-person socializing, networking, and learning.

But when the event came last week, the weather was SO hot and humid in Virginia, we were better off tuning in from our climate-controlled homes instead of touring gardens half the day. So my whining abated but I was still skeptical – I mean, who isn’t Zoomed-out by now, right? But the Covid variant has brought a sudden halt to the untethered socializing we were enjoying so recently, so by late August going virtual was best after all. (Those lucky Cultivate attendees in July!)

In the end, I’m humbled to admit that I was wrong! Because GardenComm 2021 was terrific. Here’s why:

Amy Stewart (GardenRant co-founder) covered writing, finding an agent, then a publisher, and how books REALLY get sold. On the right, the graphic she had made to find a publisher for her historical fiction.

One huge benefit of virtual is that presenters can be anywhere, so they can be the very best – in the world! Thus, the quality of the presentations was sky-high and I learned a bunch from the talks I “attended” (about Instagram, iPhone photography, and e-newsletters).  Even the subjects I have no interest in pursuing professionally – selling books or making a living from speaking – I watched and was inspired by the speakers’ smarts and by their entrepreneurial creativity and gumption.

And I’m not alone. One commenter on Facebook wrote that “Amy Stewart shared her amazing visual document that she included with her book proposal to a publisher. It was creative and set her apart from everyone else’s proposals. It was genius.” 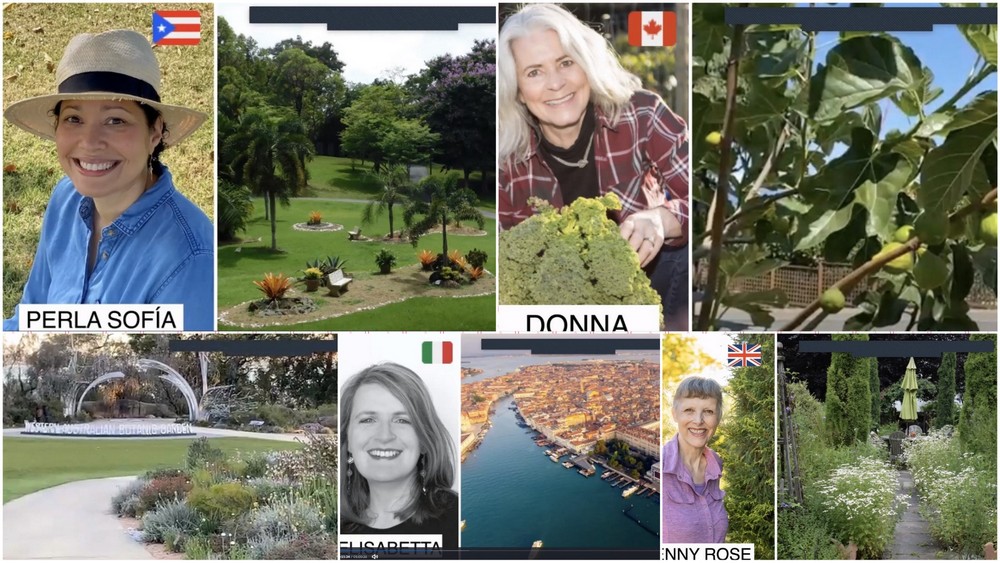 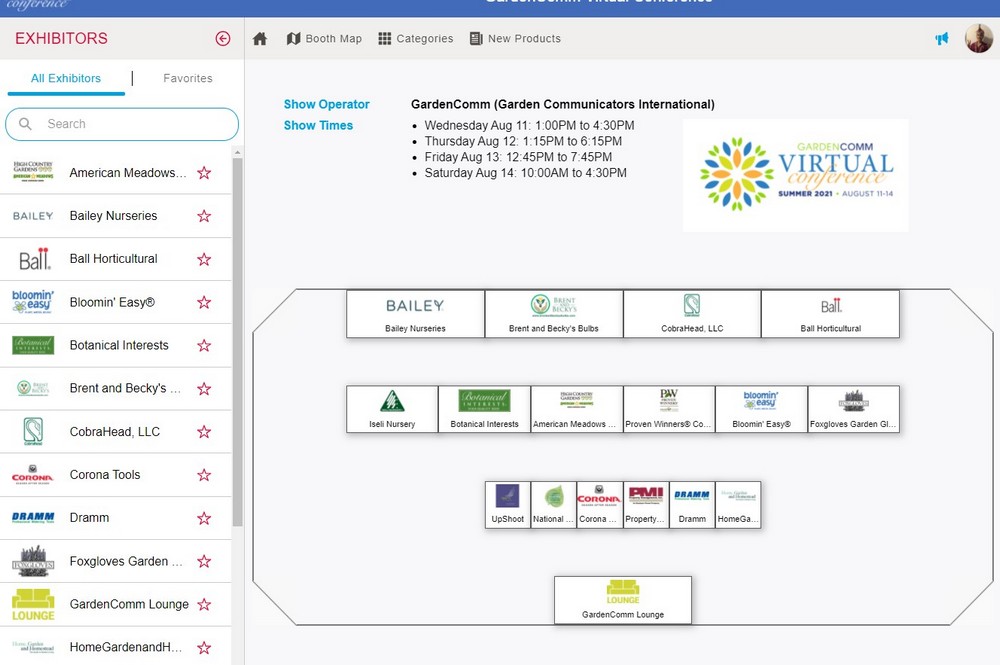 Of course there was a technical glitch or two. One that I experienced was during a networking session, which for some reason didn’t use Zoom and boy, did we learn to appreciate how well Zoom works! That’s because first, no names were displayed and even worse, when new people entered the “room” their photos were blocked by our own images.  So in the screen shot above by C.L. Fornari, notice that she saw herself on the far right instead of new entrant Kirk Brown, who thankfully had created a sign so we knew who it was. It was frustrating but kinda fun, too, as we tackled the technical challenge together.

Good news! The events were all recorded and they’re now on the event website for participants to watch. (Whereas normally we’d have to choose one of three concurrent events to attend, this way we can see them all!) That link will work until August 29, after which GardenComm will create links to individual talks available for purchase ($20 for members, $30 for nonmembers) and those who were already registered for the conference will get a link that they can access through October 31.

Didn’t register? You can do it now and watch the whole conference, using this link. The cost is $199 for members and $269 for non-members. (Members can use the code: gcfinal at checkout.)

From the Organizers: Comments, Lessons Learned

I thought it went great. Behind the scenes, there are more moving parts to a virtual conference than most people realize. We are grateful to our new President of GardenComm, Maria Zampini, for putting us in touch with OrderEase, which helped us make the conference more than just a bunch of Zoom links, though there were plenty of those.

People seemed to enjoy The Lounge in the trade show, which gave us that “I met them in the lobby and we talked about… feeling” that we had hoped for.

We had pitch sessions in person in Salt Lake City in 2019, but I believe being virtual helped us extend our reach to editors who don’t normally attend our in-person conferences.

This conference took months of behind-the-scenes work to choose educational sessions, find vendors who agreed to come along for this new experience, get international members to send in videos for garden tours, convince members it really was more than Zoom, set up everything in OrderEase, and more.  Many Kudos to the staff at Kellen, our management company, who pitched right in with the local committee to help put this all together.

We will be surveying attendees so I can’t say for sure, but from where I sit as a member of the Virtual Conference Committee, I feel like we all enjoyed it!

Because our conference was virtual the past two years it allowed people who can’t normally attend because of health or finances to take part. I can see that even when GardenComm returns to in-person events, a virtual component might be included to make educational and networking available to a wider audience. It has also allowed us to have speakers that we couldn’t otherwise afford present to the group.

When we have gathered in person, most of the talks haven’t been recorded because of the expense involved. But because of Zoom, our talks can be recorded with no additional costs. This allows anyone who registers to see all of the talks, not just one, and it allows those who want to go back to a particular information-packed presentation to do so again.

A Song from Sally

On a final note, MUCH thanks to the organizers for their hard work and creativity, and to the sponsors for their continuing support of garden communicators!

Personally, it felt great to spend three afternoons connecting with so many people I know, admire and really, really like. This wonderful community of people who love what I love is something I have garden-blogging to thank for. Yay!

Now I’ll give communicator extraordinaire Sally Cunningham the last word in her singing toast, from there in garden-crazed Buffalo.