Legal Battle over a *Planter* in Robert Kennedy Garden 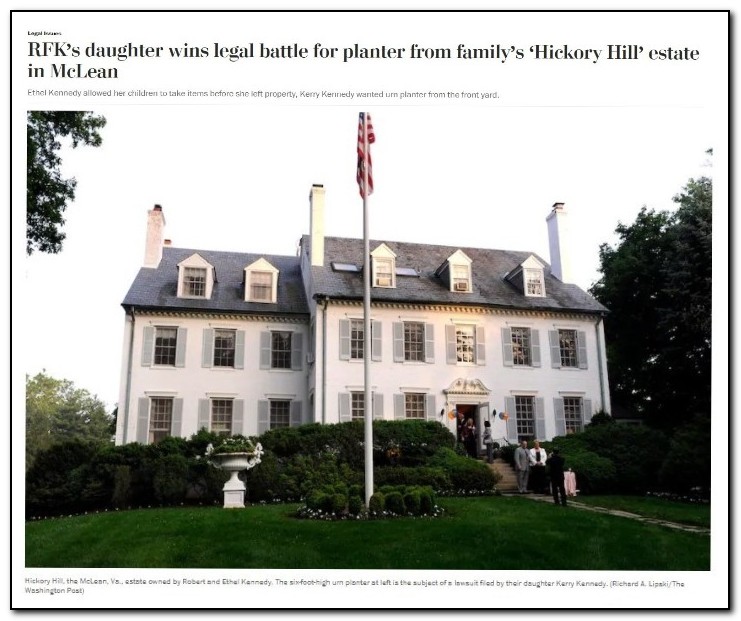 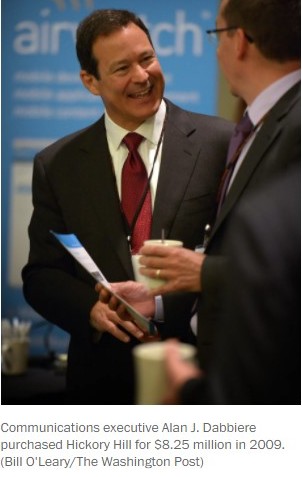 In this Washington Post article we learn of an expensive legal battle (because aren’t they all?) between Kerry Kennedy, daughter of RFK, and the man who bought Hickory Hill, where she grew up. Ethel Kennedy had asked her nine children to choose items they wanted to keep before she moved out, and Kerry chose this urn-shaped planter from the front yard.  She said she treasured it because it was just outside her bedroom window and was one of the few things the family owned that had belonged to President Kennedy, to her grandfather Joseph P. Kennedy, and to the previous owner, Supreme Court Justice Robert H. Jackson.

By the terms of the sale, buyer Alan Dabbiere was allowed to retain possession for 10 years after the 2010 sale, but when time was up Kerry tried to make arrangements to pick up the urn and Dabbiere refused, saying the urn conveyed with the property as a fixture. In the process of renovating and researching Hickory Hill, Dabbiere had found that Jackie Kennedy had not brought the urn there, after all, which he claimed should negate the agreement to turn it over.

The upshot last week was a ruling in favor of Kerry Kennedy, with the judge declaring the agreement to relinquish the urn was binding, even though he made it under the mistaken belief that the urn was a family heirloom. He deemed the planter “personal property, not a fixture of Hickory Hill, in part because it wasn’t physically attached to the property and had been moved from time to time.”

After which, Kerry Kennedy said that “the dispute regarding the urn has been resolved to our satisfaction and the urn is in the process of being returned to me,” to be placed at her home near the Kennedy compound in Hyannis Port, Massachusetts.

A New Urn for Mr. Dabbiere?

So imagine if you’ve lived in a grand estate for 10 years and (presumably?) come to love the big old urn in the front yard, only to see it unceremoniously removed forever, despite your lawyers’ best efforts to keep it for you. I know we can all sympathize.

So readers, can help out this distraught million/billionaire? I’ll start.

Or search on Pinterest. Lots of cool stuff there! Still too small for that grand accent you’re looking for, I imagine.

Better yet, prowl the local estate sales – in places like McLean, of course, and other concentrations of rich people like yourself.

Sure hope you find what you’re looking for! Though sadly, (okay, snarkily) I can’t help but imagine what you could have bought with all those legal bills you paid, for nothing.