Cultivate Brings the Industry Back Together in 2021

I had promised Susan et al. to report on Cultivate a few short hours after attending this huge trade show in Columbus last week – back in person for the first time since COVID changed all our lives. But it turns out that so much social activity after so long on the social distancing wagon is exhausting.  Plus, I visited Scott Beuerlein in Cincinnati. I needed a few days. 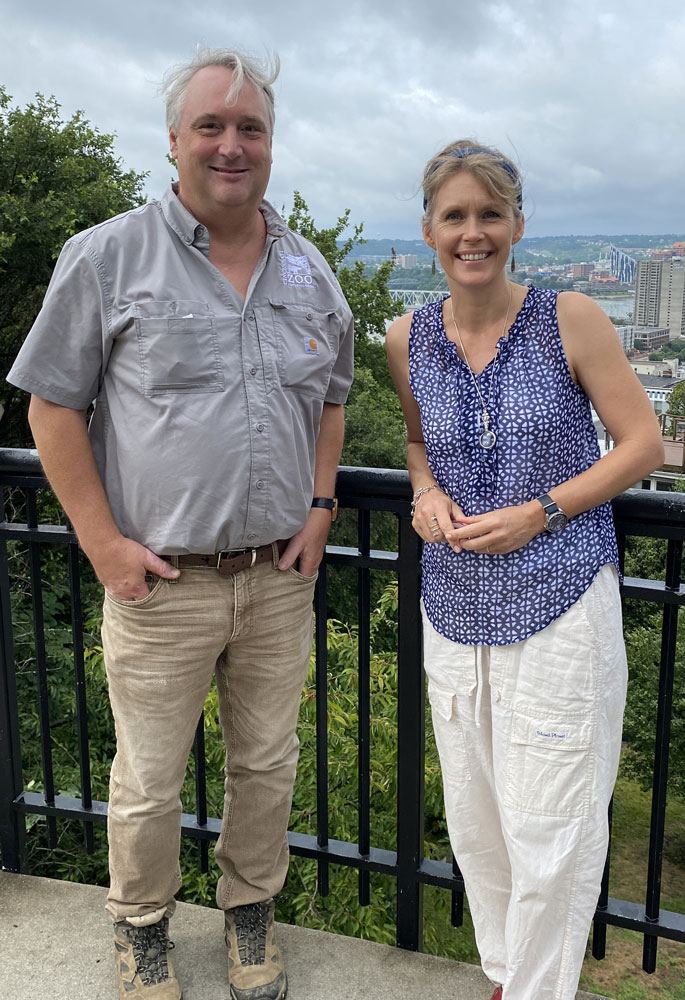 Scott Beuerlein showing us Cincinnati. Surprisingly he didn’t nudge me over the edge.

Cultivate is normally a MASSIVE show, showcasing the newest plants, newest products and newest equipment headed out to the gardener and professional grower for the following year (2022).  But even though it was a little smaller, I realized quickly that there were some basic professional skills I (and many others) needed to polish up after too many months away:

In addition, there are the various trade show ailments to navigate again: Trade Show Shoulder (caused by 40 pounds of new catalogs), Trade Show Shin-Splints (Why did I wear those sandals?), Trade Show Dehydration (I’ll drink something at lunch, can’t afford the weight), etc. etc. etc. 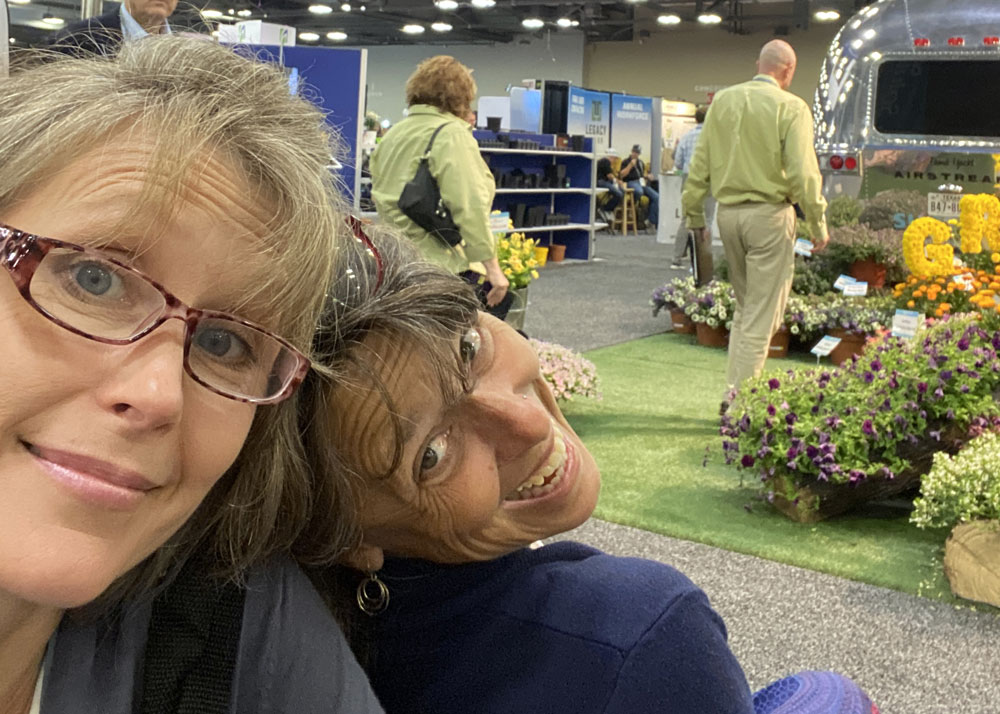 My travel companion, Louisa Zimmermann-Roberts of Thanksgiving Farms, and I on Day Two.

My tongue-and-cheek aside, it’s hard to communicate how genuinely wonderful it was to witness so many members of the horticultural community cautiously coming together — to meet up with old friends, connect with new ones, and see what the industry has been up to.

Seeing these plants and faces on a screen is – despite the protestations of joyful introverts – NOT the same.

But before I get into some of the notable things I saw (okay, the plants), I’ll briefly touch upon…

The Elephant in the Room – COVID

“Hold on. You are at an indoor trade show in the middle of a global pandemic without masks?” shame-texted a double-vaxxed UK friend (still in the middle of government lock downs) when I sent him a photo at the Proven Winners’ booth to show off their new caladium and calla series.

With the COVID vaccines making the chance of serious illness and/or death for the vaccinated extremely rare, and reports that the vaccine is working well against the new highly transmissible Delta variant; people were justifiably feeling more secure in returning to semi-normal and allowing the pandemic to shift into ‘endemic’ status.  Those that aren’t vaccinated were warned to wear masks and took their chances – as is their right. And presumably, the immune-compromised stayed home – which is still a wise course of action at the moment.

Handshaking and touching in general was still very much optional.  Many have perfected the Napoleonic bow – but others reflexively reached for old friends and silently thanked the vaccine for personal peace of mind. The show was much smaller than usual, due to much of the Canadian, Asian and European contingent staying home, and that meant more room overall.

In addition, hand-sanitizer stations were everywhere, tables and seats were spaced out, and tons of hands-free options from card-paying to badge-printing were made available.

A huge BRAVO to the organizers for all these concessions, and indeed for their courage.  There are a lot of people waiting in the wings to throw scorn and/or shame upon the first show that weighs the pros and cons and finds them tipping towards the benefits of in-person conferences. It’s a brave choice to – in turn – give that choice back to attendees.

Now back to why we all went in the first place….

Tropicals are very much IN

Wait!  Don’t click away from what seems to be an unhealthy obsession on my part. I promise I’ll only devote a few sentences to this.

The thing is, summer-outdoor tropical foliage was EVERYWHERE.  It was so everywhere that it was starting to tip toward the over-the-top-gaudiness of Victorian bedding schemes. 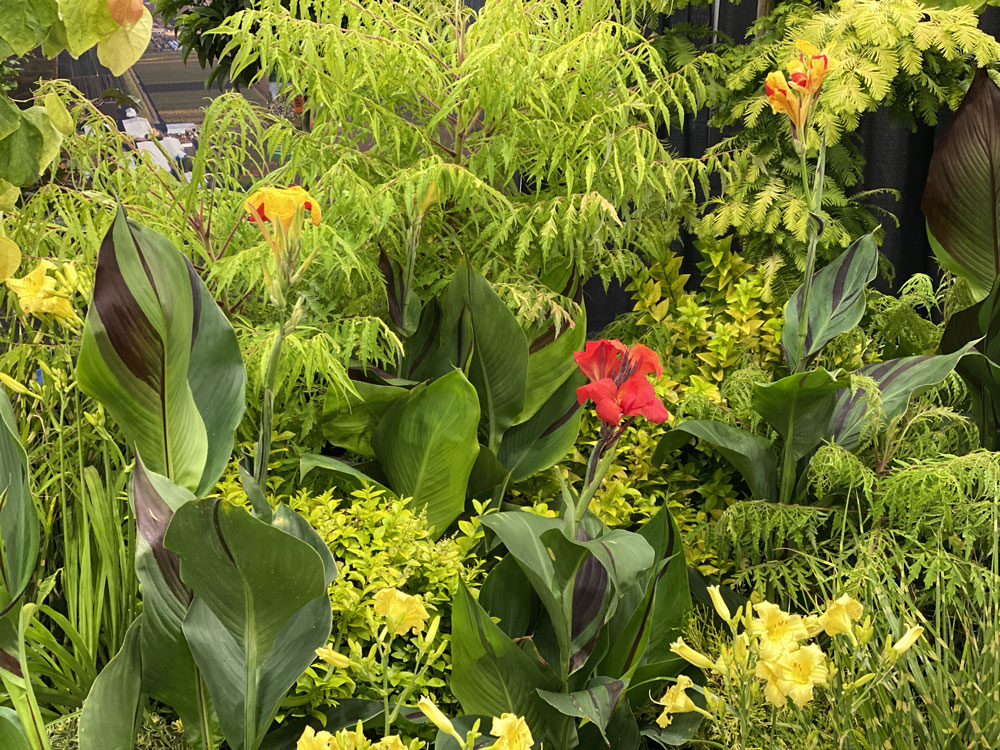 How’s that for eye-popping?

Beyond houseplants, the industry is recognizing that people want to bring that jungle feeling/sultry evening/island vibe/exciting accent outdoors (especially since we haven’t had a decent vacation in a long time), and it’s making those plant choices much more accessible. 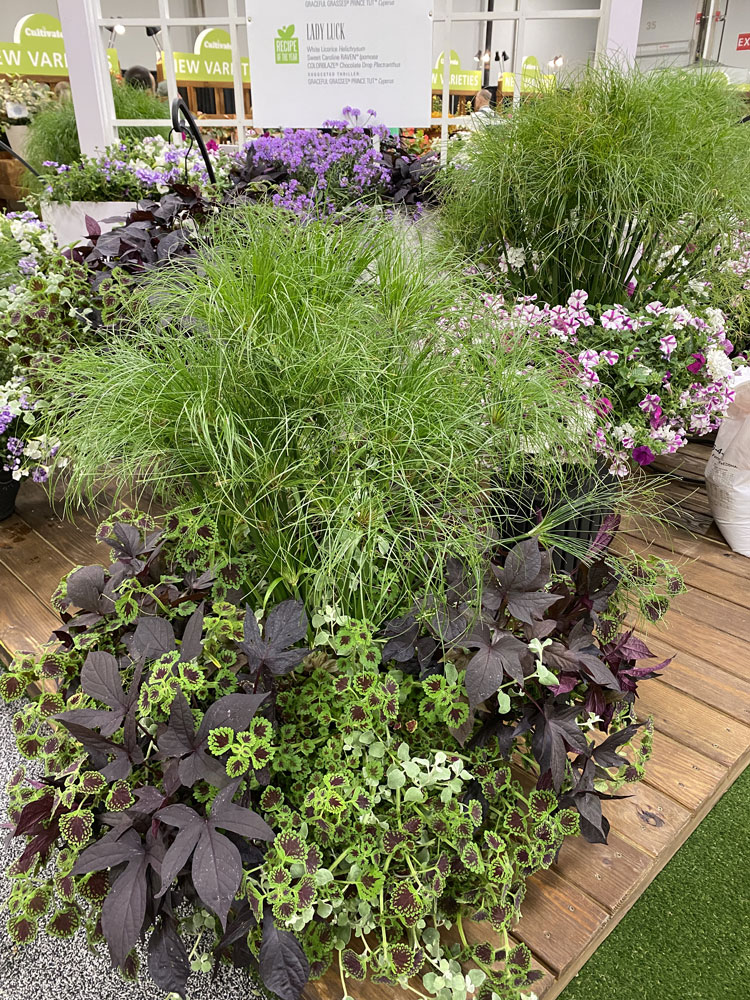 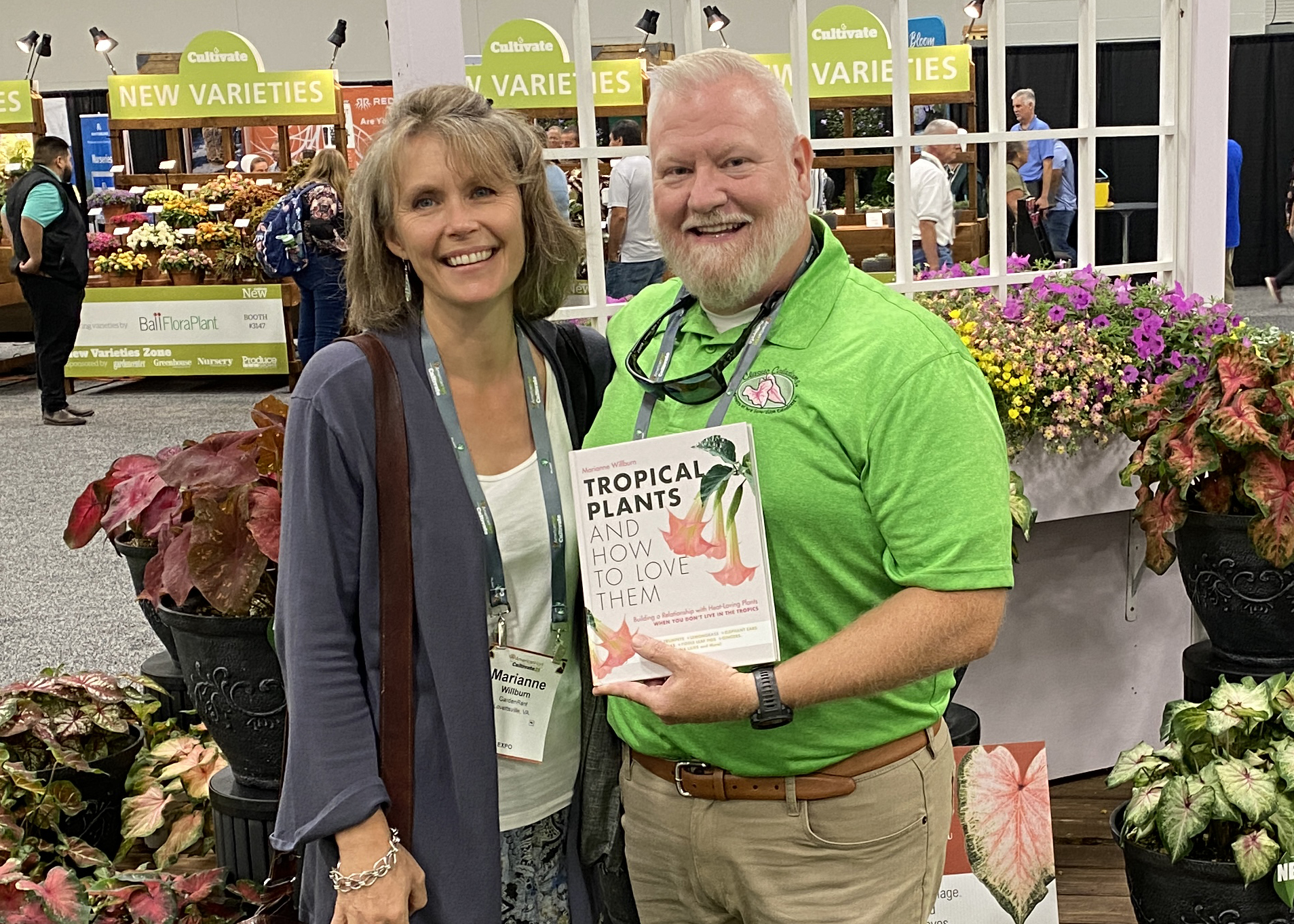 Chad Harrison at Classic Caladiums was happy to find out that I actually HAD put all his help to use.

Hands-down, the most valuable part of the show for me was the incredible amount of new introductions from breeders and nurseries all over the world displayed together in one long, easy walk. 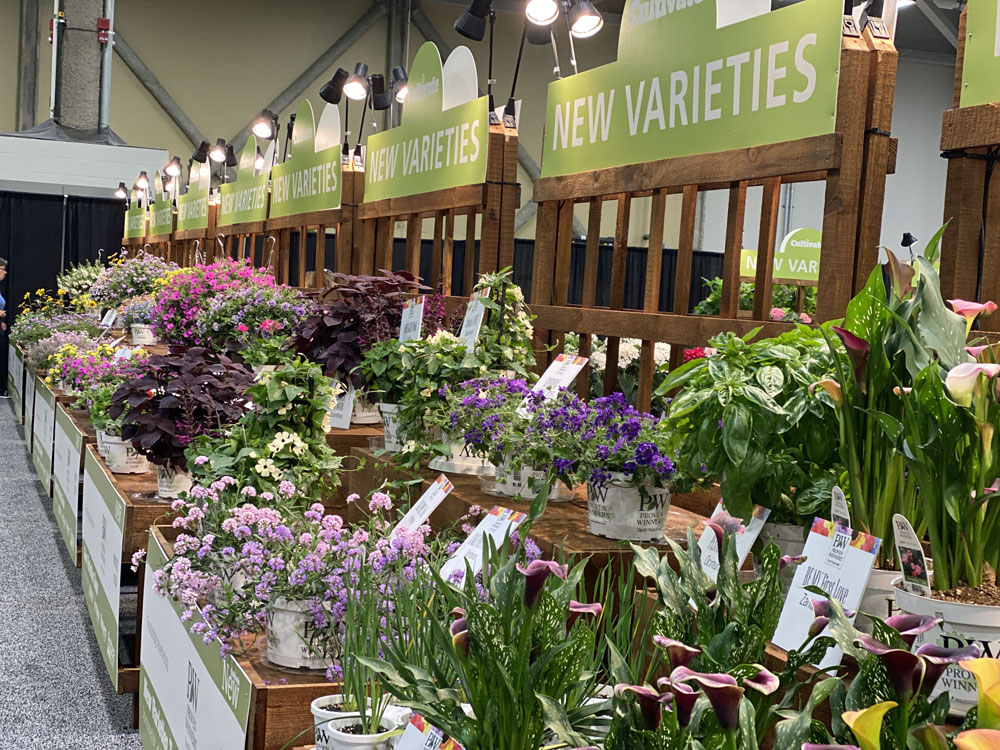 For the most part, plants were at their best (though cold temps on the floor played merry hell with the mandevilla), and it gave us all a chance to see them, sneak a feel (apologies), and most importantly, contrast them against each other.

For instance, I was looking at Hoffman Nursery’s new variegated little blue stem, ‘Chameleon,’ when the immaculately dressed and always witty, John Friel from Emerald Coast Growers led me over to their recently-released variation on a theme, ‘Shining Star.’ We walked between the two, discussing color differences, then he stood near his competitor’s product and murmured with a grin,  “move on folks…nothing to see here” when people lingered too long. 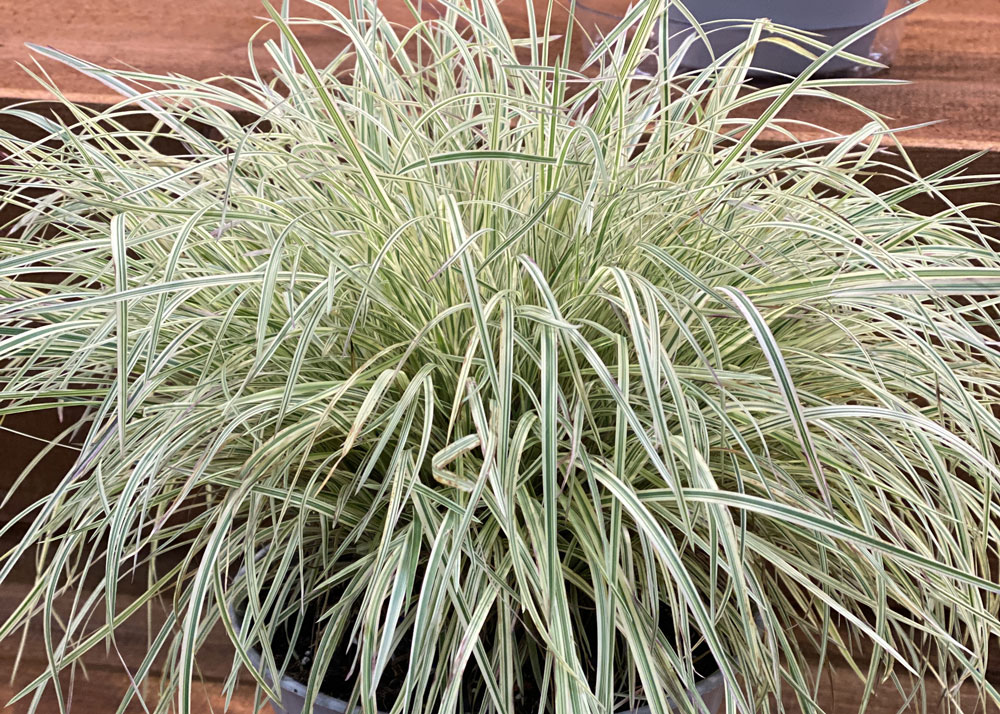 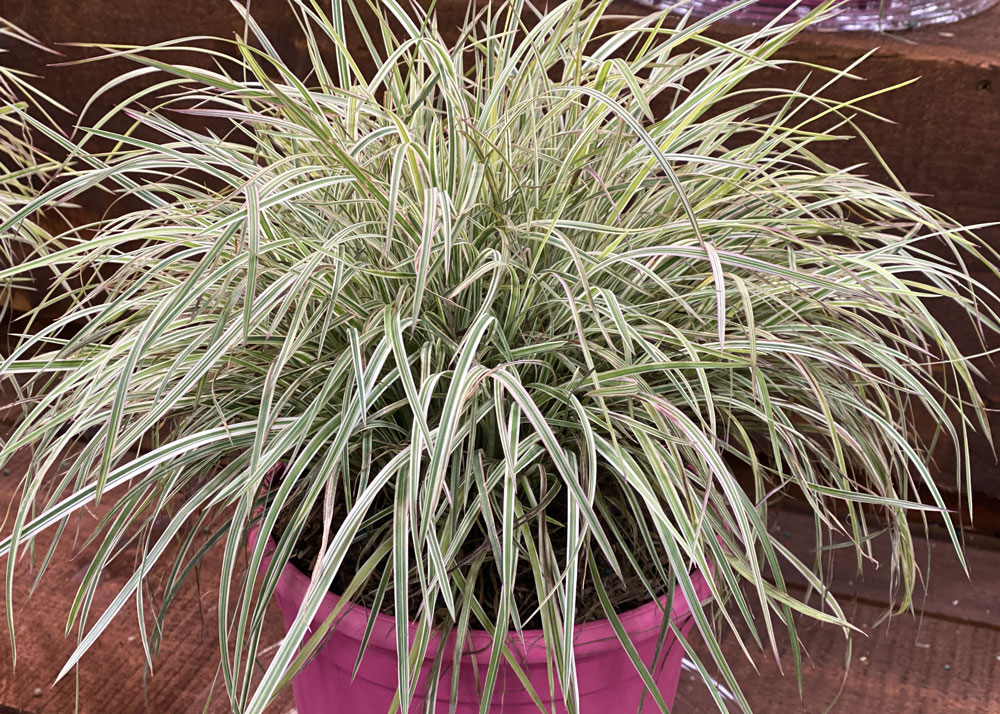 And ‘Chameleon’ from Hoffman Nursery.

Other plants worth mentioning…

Zinnia Profusion Red Yellow Bi-Color (an All-America Selections winner) was outstanding. It was great to see this newcomer to the compact Profusion series in its full glory – especially as our recent floods made short work of all but one at my place. The hot bi-color mix is striking and fades to a strong raspberry – and not in the way gardenias “fade” to dirty yellow. If you find this one next year, pick it up.  And if you found my two lost plants in Georgetown, you’re welcome. 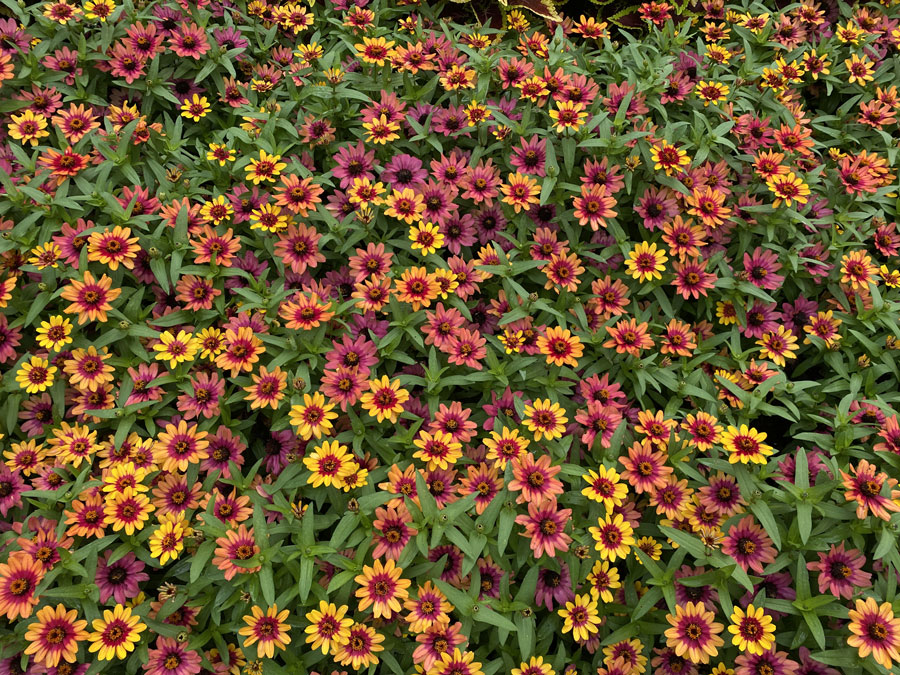 I’m cheating, as this was actually taken at the Cincinnati Zoo (no doubt planted by Scott’s overworked hands).

I was on the lookout for Suntory’s new mandevilla, Sun Parasol Sun Beam, to see this golden cultivar in person, and ended up finding it by one of the coolest exhibits on the floor – the Suntory AirStream. 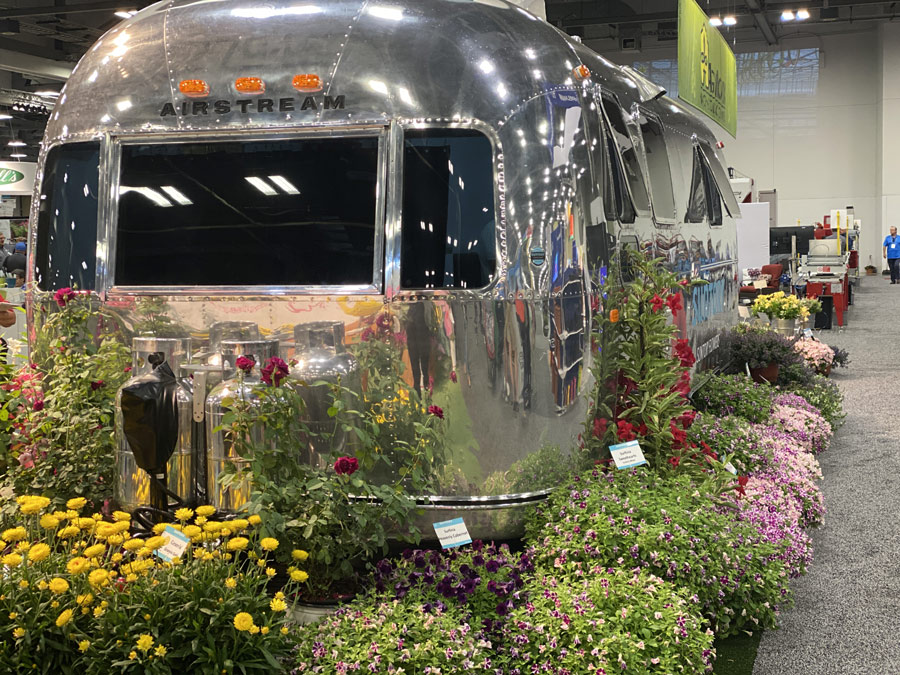 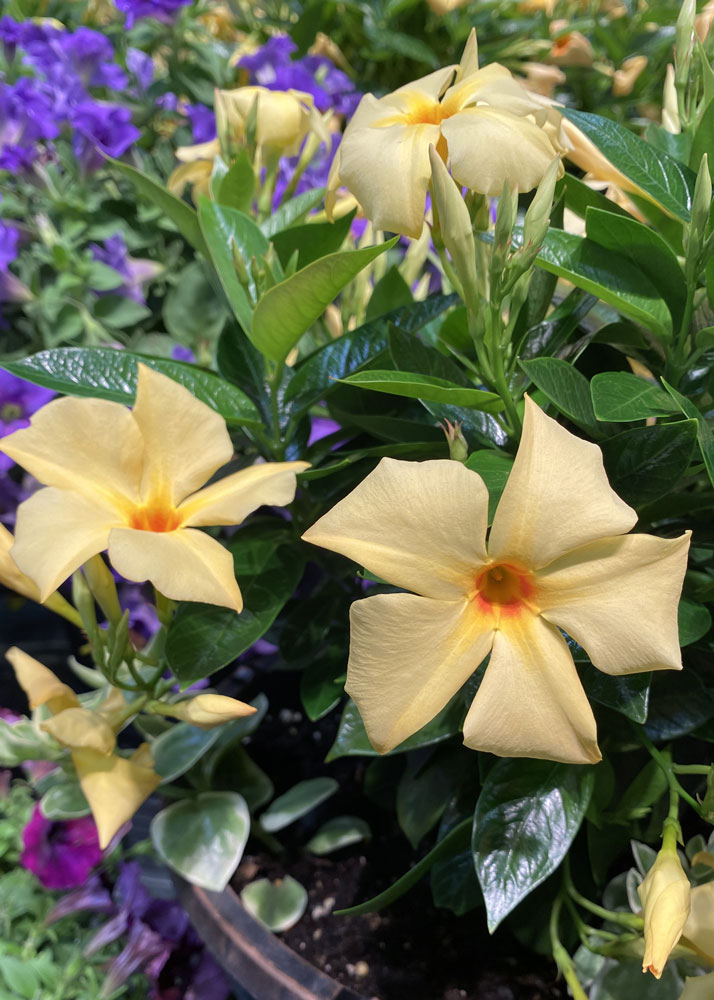 Fignomenal™ container fig from Lloyd Traven and the (literally and figuratively) Phenomenal™ folks at Peace Tree Farm (yep, the lavender) was another star which ended up winning a Cultivate Retailer’s Choice Award.  I was looking for this little fig, as I’d been told of its many attributes the night before by Lloyd himself (who had the decency to blush in embarrassment when he revealed the name).

A sport from Chicago Hardy, the original plant is five years old and only three feet tall (with the container), and currently covered in 90 figs.

Is it hardy?  “Who cares?” is the answer – this pot can easily come into a garage in a dormant state for the winter. 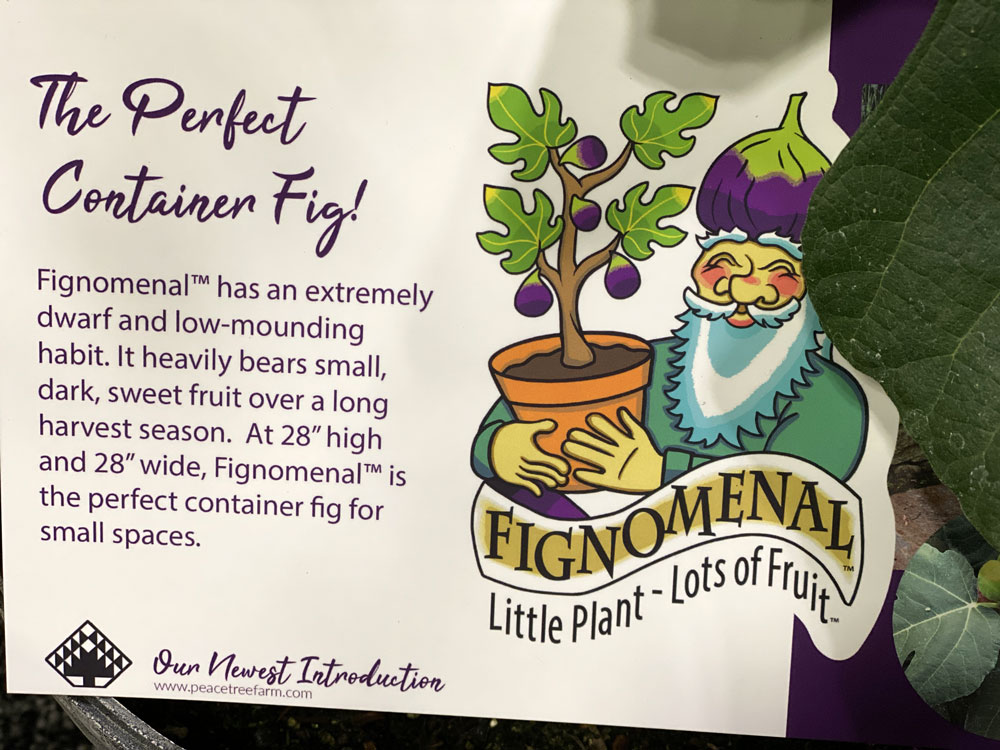 The Fignomenal tag was just as cute as the fig itself, playing off of Lloyd Traven’s legendary beard.

‘Burning Heart’ caladium from the Proven Winners Heart to Heart® series, featuring a deep bronzy-red leaf that stands taller than other caladiums and is fully sun-tolerant.  When I saw this plant as one-of-the-chosen in the personal garden of Chris Baker of Baker’s Acres, I knew it was a good-un. 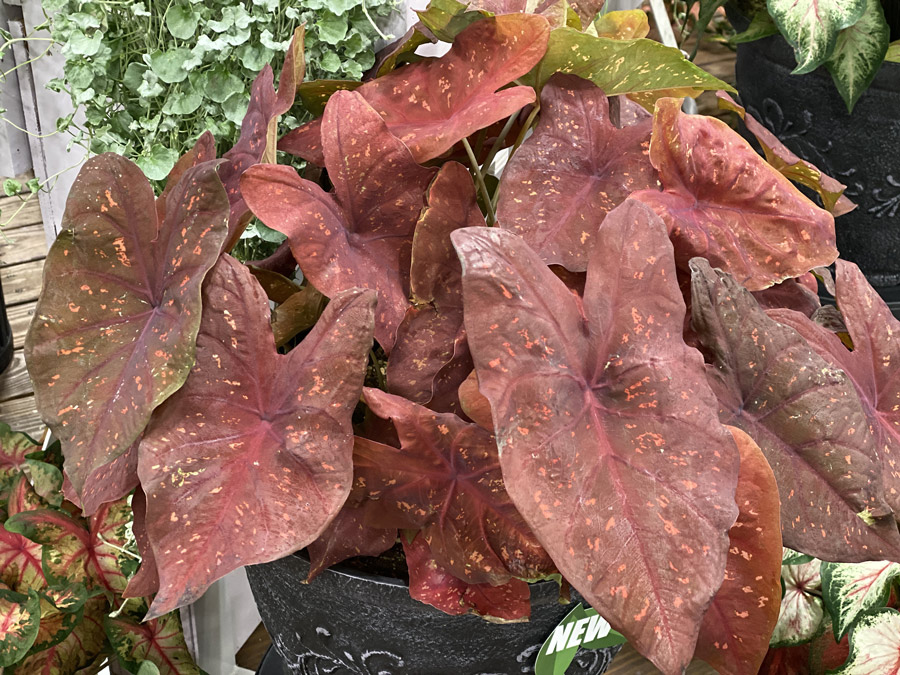 While I’m discussing Proven Winners’ caladium (that debuted last year), I should also mention their new-for-‘22 Be My™ series of sumptuous calla lilies in colors that make the legs go weak. These are true Summer Romances.

Hearts will be broken, but you know you’ll do it all again next year. 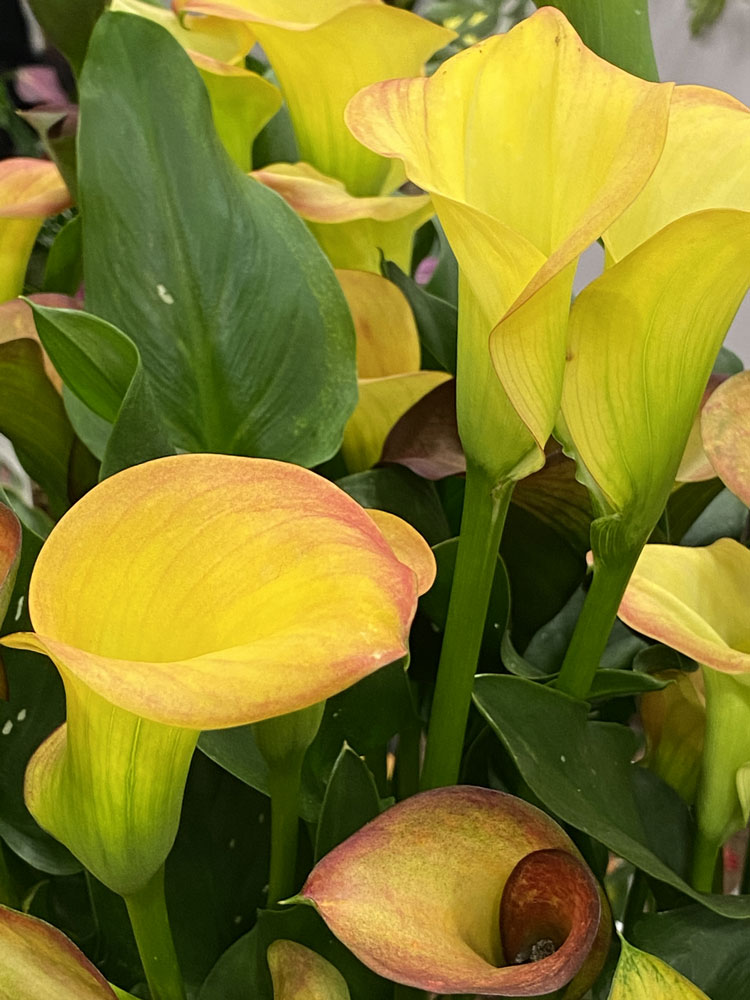 Be My™ Main Squeeze™ – Where do they come up with these names?

Marketing name of the year (also known as “Damn I wish I’d thought of that and patented the hell out of it.”) definitely goes to Darwin Perennials/Ball, who have begun a new series of artemisias termed…wait for it…Sun Ferns™ with two cultivars to start them off – ‘Olympia’ and ‘Arcadia’. Ball should stand ready to watch the money roll in from consumers who have been waiting for such a fantastical thing to be bred right along with unicorns.  Brilliant strategy. 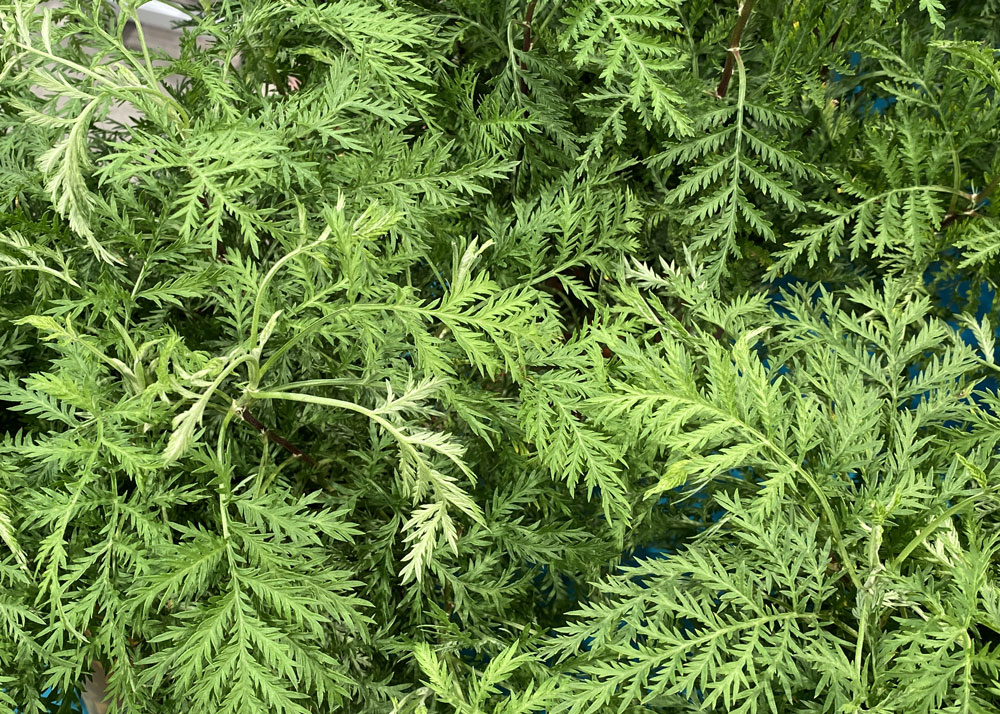 Will I grow them?  Around here artemisia is a dirty word, so it will take some convincing – but I have an open mind.  Sunny containers need fillers too.

Darwin also unveiled another Carnival series heuchera with giant leaves called Big Top Caramel Apple.  With villosa blood in the line, I’m interested.  Too many of the pretty-pretty heucheras melt out for me. 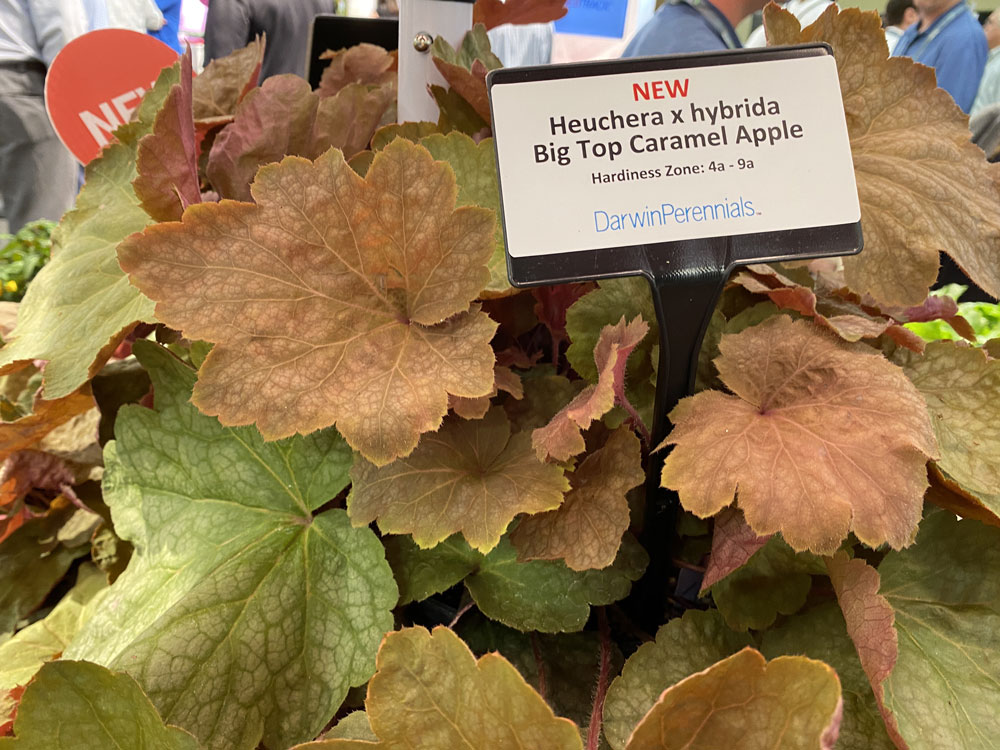 At the Bloomin’ Easy booth, I had a chance to see their 2021 Cherry On Top™ sorbaria in person and it wasn’t a disappointment.  Red new growth, white plume flowers and deep red seed pods have put this one on my list. 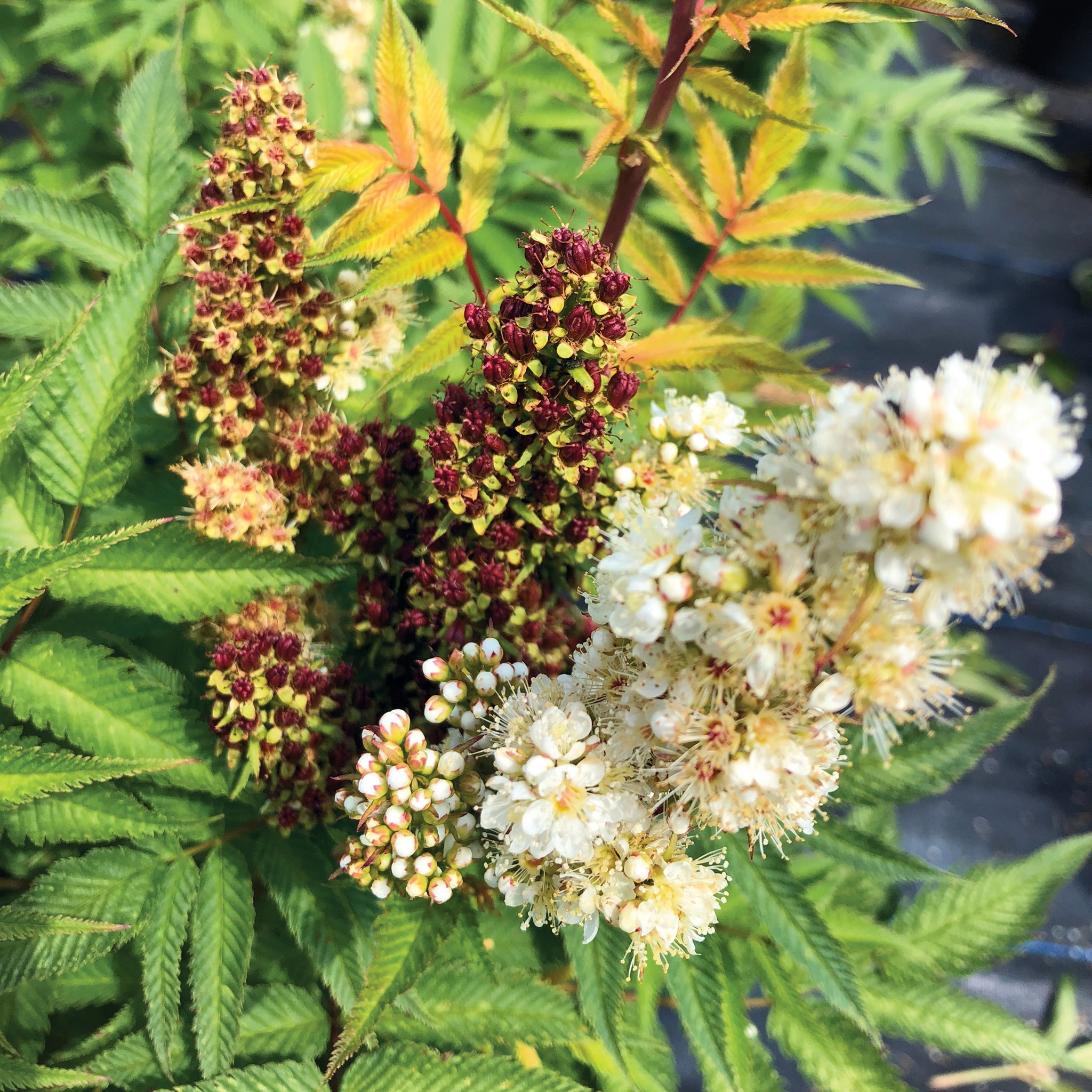 A new houseplant that caught my eye (and apparently the eyes of the judges handing out Retailer’s Choice Awards) was ‘Brasilia’ a Peperomia caperata from Succulents Unlimited. Yet another reason for urban jungle enthusiasts to go ahead and take out that second mortgage. 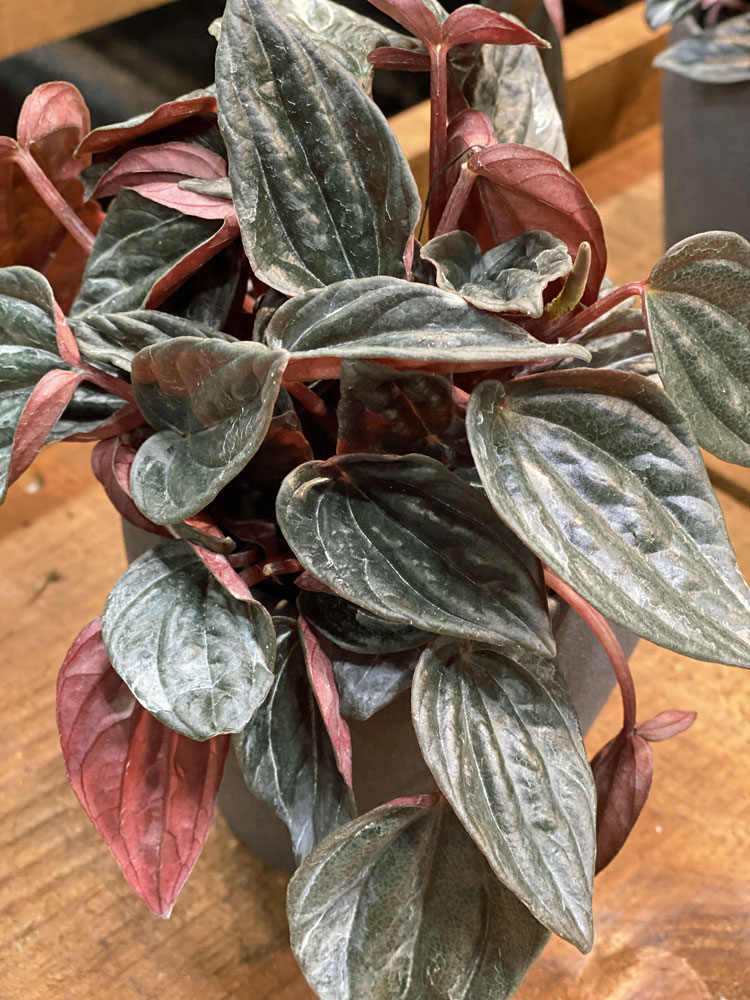 Lastly, The Southern Living/Sunset booth deployed their newest weapon of torture against Northern gardeners in the form of bi-color Ever Twilight™ agapanthus. If you are one of the chosen Zone 8-11ers, may it bring you joy.  But please don’t tell me about it – I’m still smarting over their ‘Platinum Beauty® Lomandra. 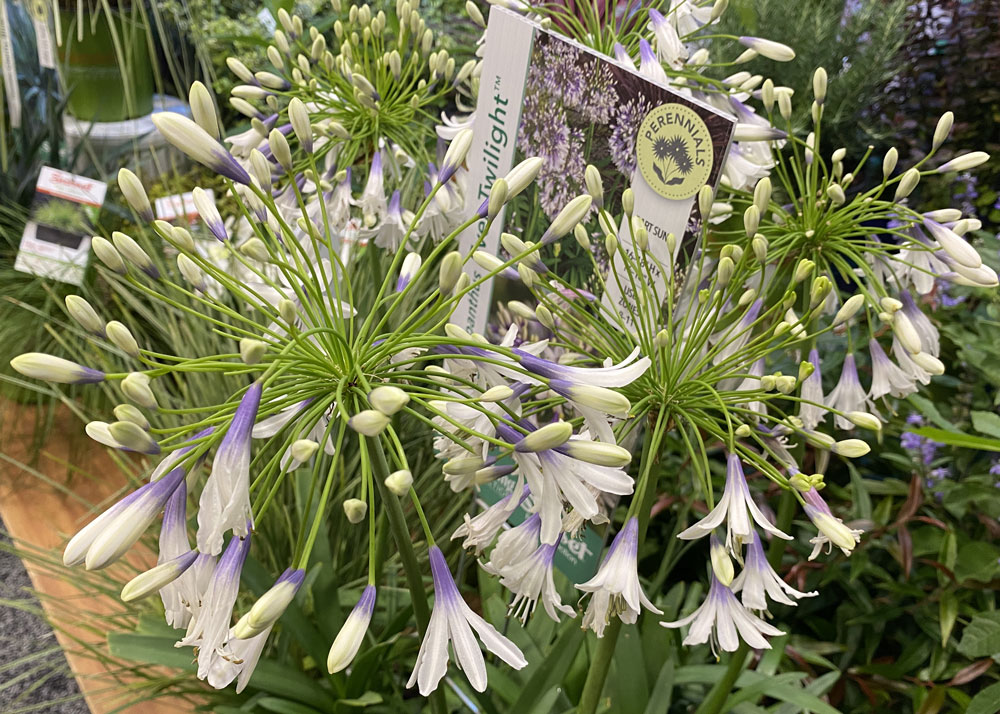 And then there’s the equipment

Cultivate is a serious show for serious growers, and when I wasn’t hunting plants or rubbing my shin splints, staring at the shiny, labor-saving machines was enough to make me want to start a nursery (with a rich, elderly uncle and his artesian well). 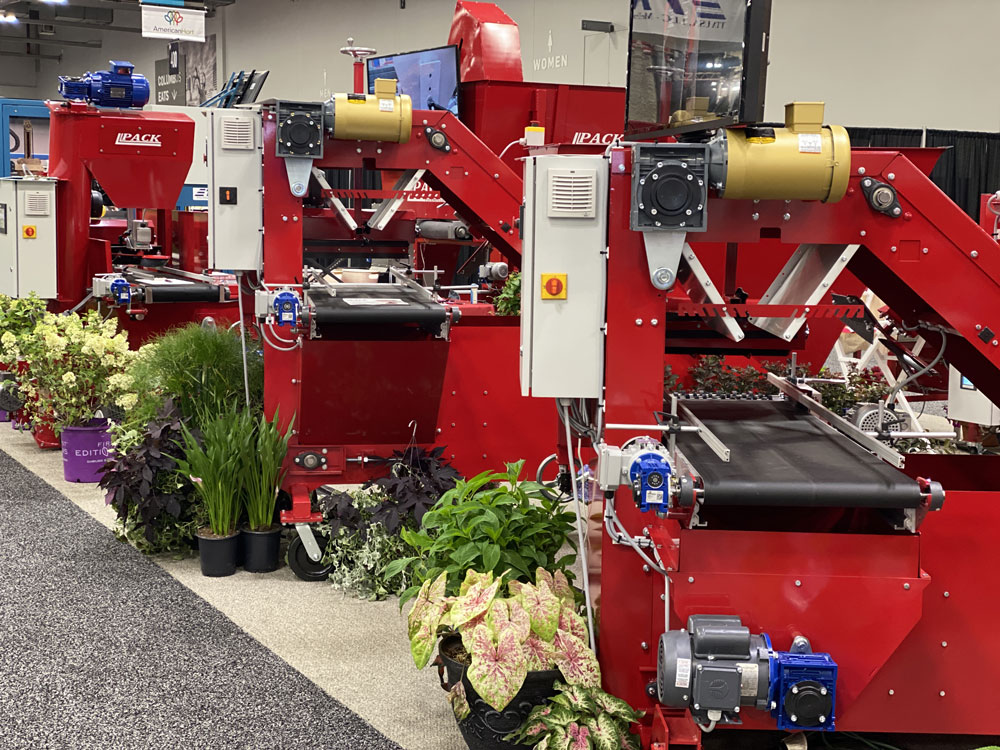 I’m clearly well beyond acceptable copy limits, and I can hear Elizabeth clicking her tongue, but I have to just mention one more thing: how thankful I am to those who toured us through their personal gardens in both Columbus and Cincinnati. 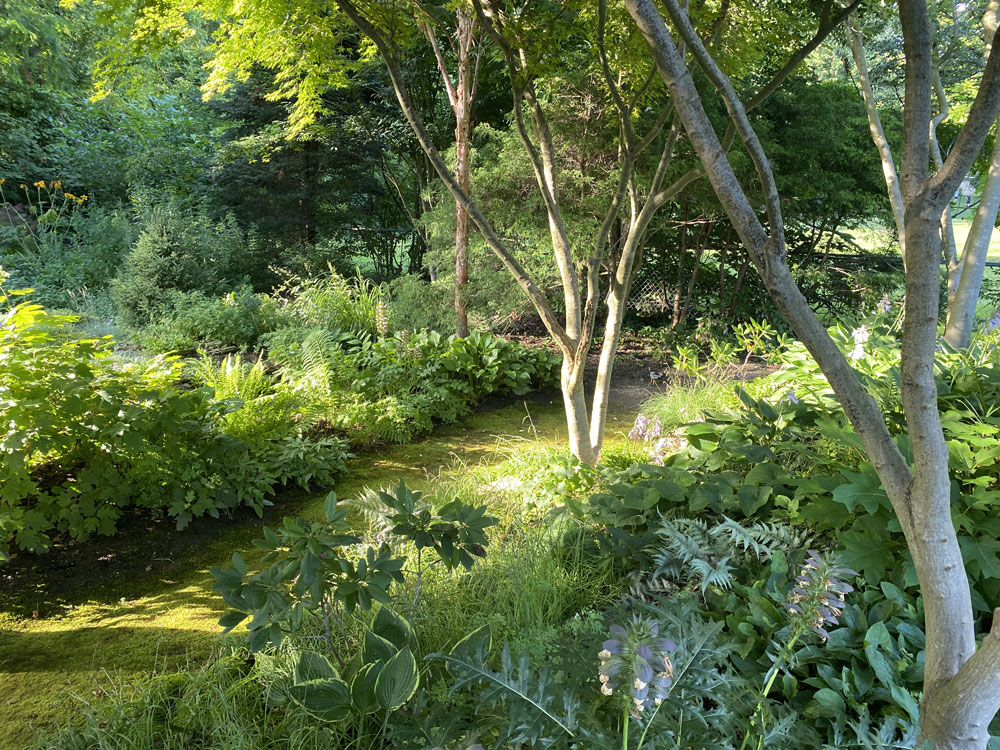 Turns out, he DOES know what he’s doing. (The Garden of Scott and Michele Beuerlein)

Garden writers are fortunate, but we are also shameless opportunists.  We get ourselves invited into gardens at the drop of a hat… 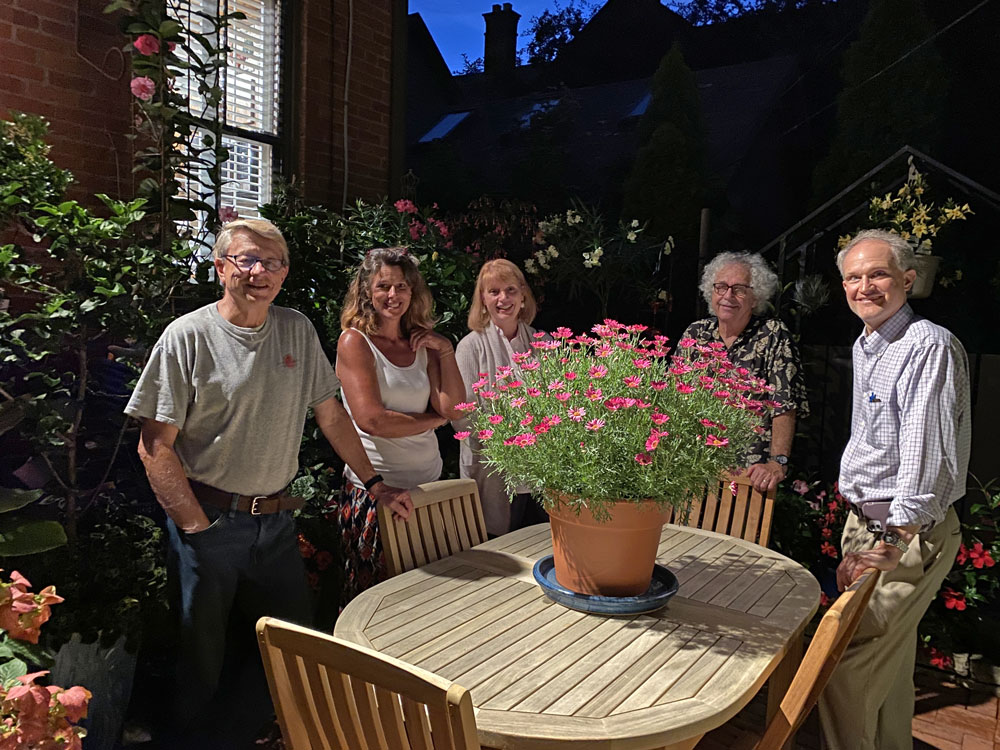 We were unexpectedly taken to the magical tropical garden of Paul Schrader at 9.45 at night.

…Or invite ourselves based on sketchy connections and confident smiles… 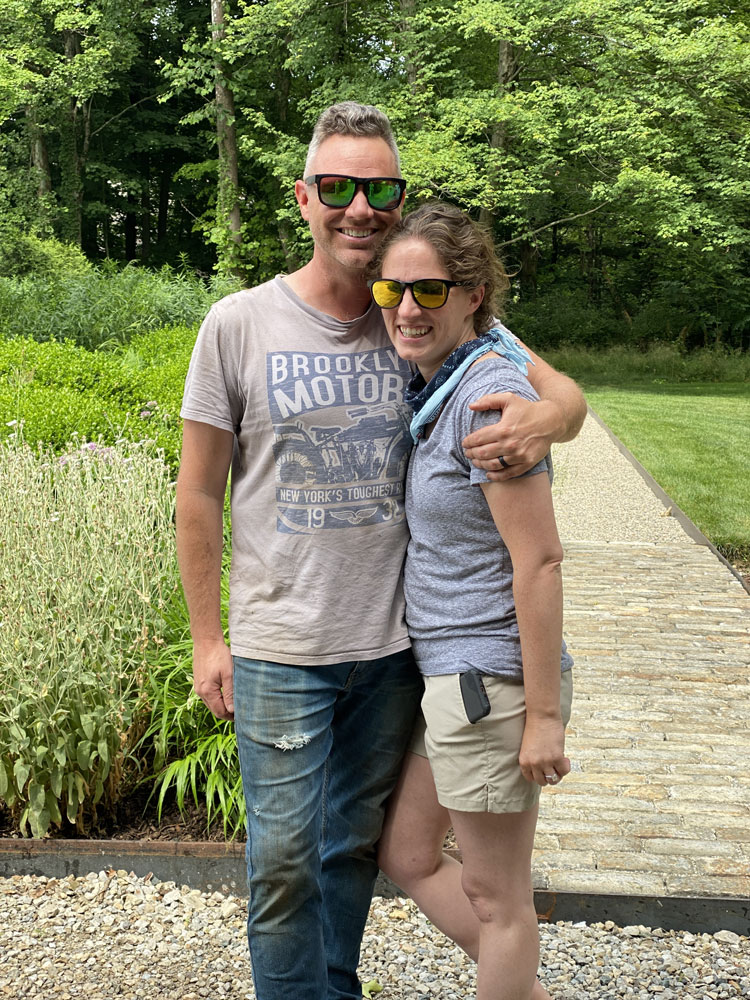 Still not sure why Nick and Allison McCullough said yes, but thrilled they did, bless them. 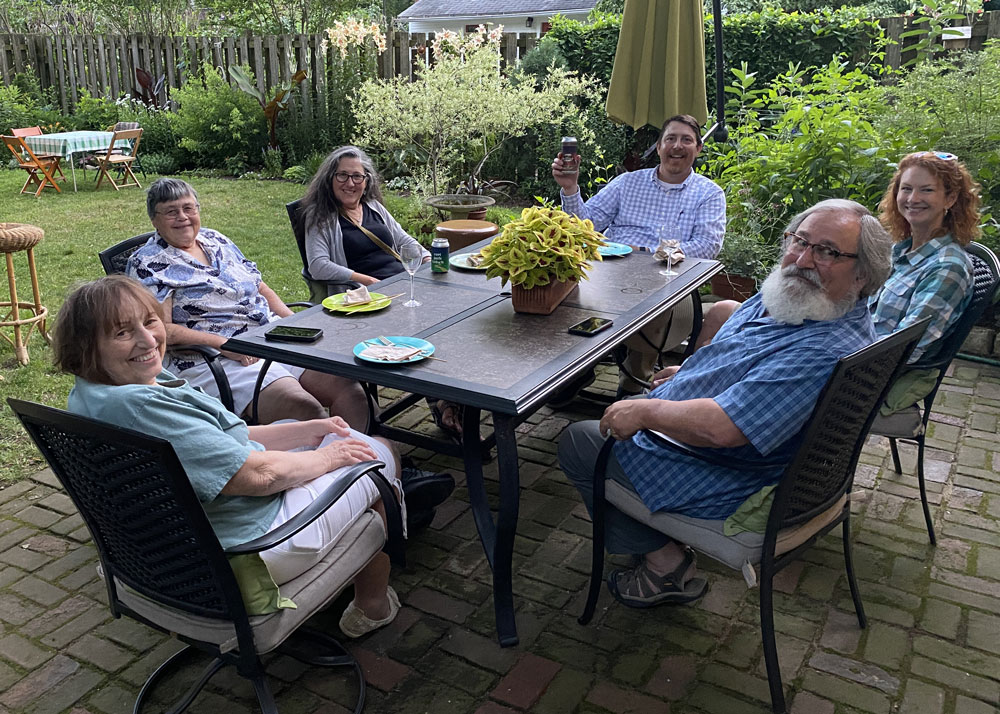 “Does anyone know who we’re smiling at?” 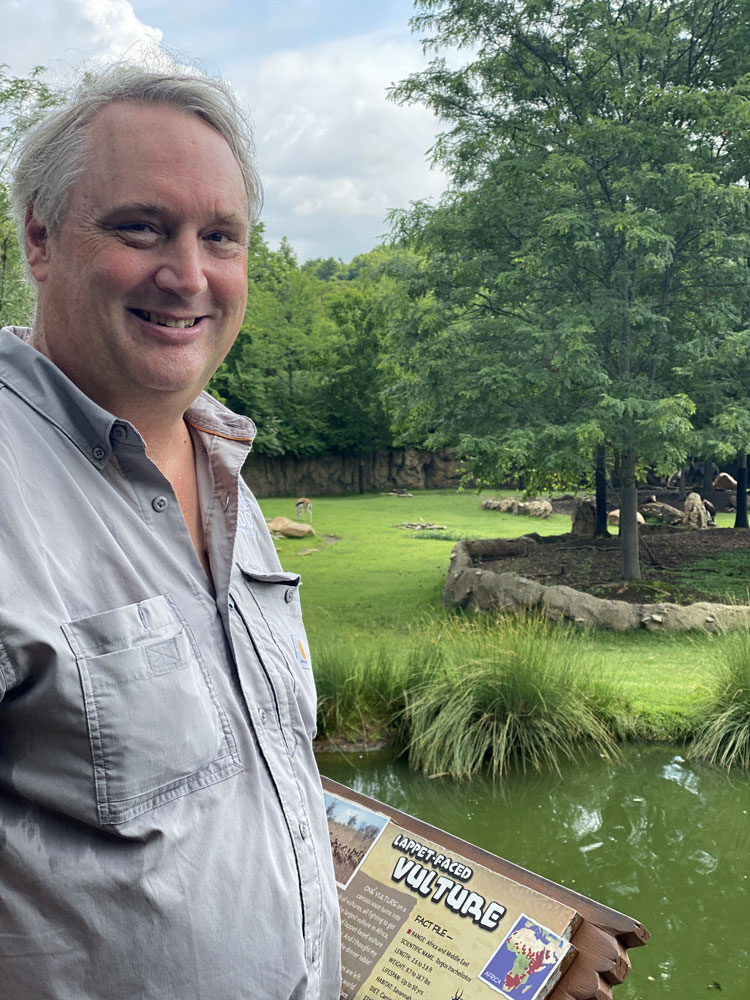 Scott Beuerlein, looking justifiably smug in his kingdom. I’m sure the sign is just an error on the Zoo’s part.

But in the end we see glorious, personal gardens, meet new people, and enjoy thoughtful conversations on topics that sometimes have nothing whatsoever to do with plants.

And then we max out the credit cards. 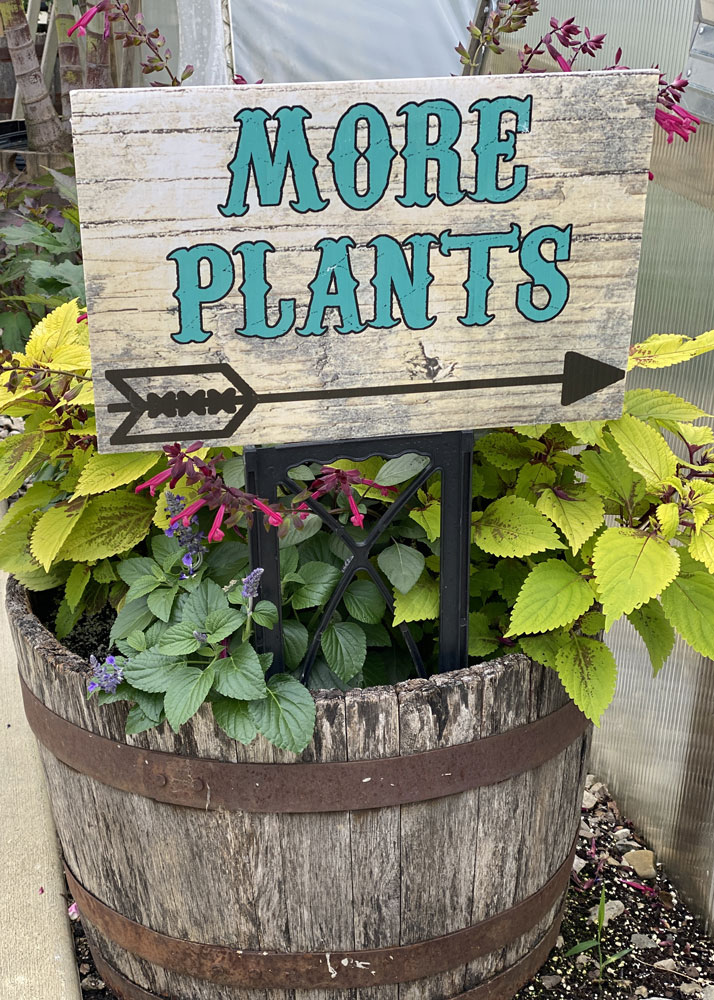 Groovy Plant Ranch knows how weak we are.

I’m thankful for that privilege, and I’m hopeful that as we cautiously move forward, we all remember how good it is to come together as an industry – and indeed as human beings. – MW