Three warrior species are battling for dominance on the hillside outside my kitchen window. It is a cliched phrase in the garden writer’s book of spells, but it is nonetheless apt. Tiny, passive – but aggressive – moves are made every minute under the soil while I wash dishes or sip my coffee or water deck pots and smile at the lush wickedness of it all. 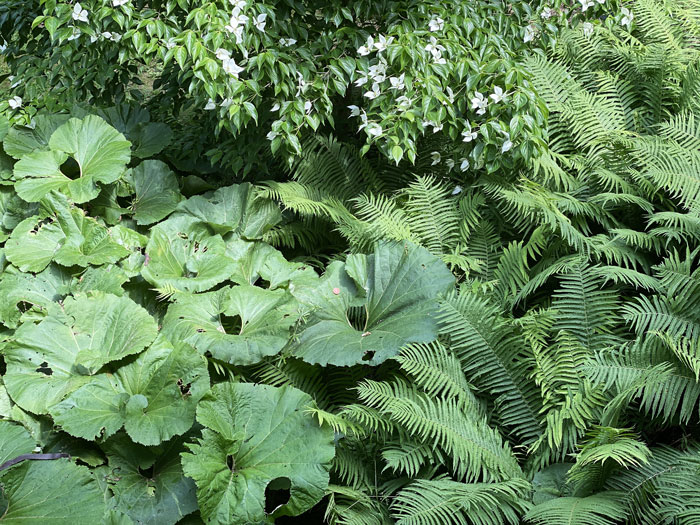 Here the tall, four-foot shuttlecocks of ostrich ferns are contrasted in all but hue by the round, primeval saucers of Petasites japonicus held atop three foot petioles – some leaves fully 30 inches in diameter.  And in a deep corner, slowly moving away from the house, a smaller form of petasites – P. japonicus f. purpureus, with purple veins and petioles, secured from the private garden of an Oregon nursery many years ago as a precious find.

At the feet of all, creeps Houttuynia cordata– ever-patient, ever thirsty. Mower and house control the boundaries of this fight. 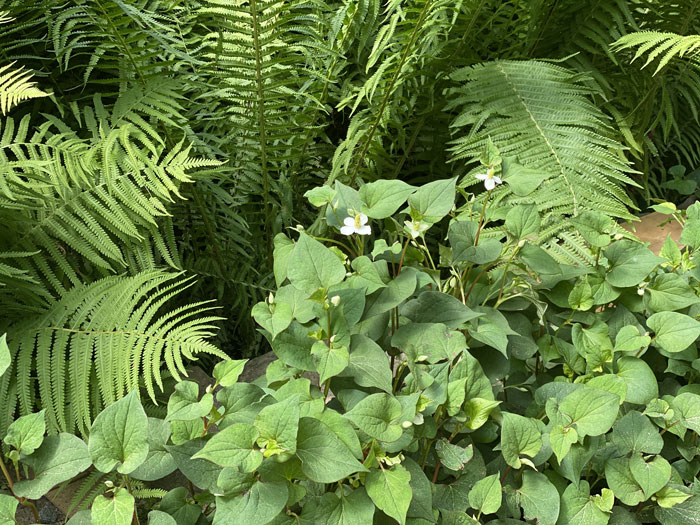 Who will win? The umbrella-like petasites fully shade the soil and prevent the 18” houttuynia from creating a stronger footprint beyond the area’s margins, but ostrich ferns send their fronds skyward very early, and are not above moving between the saucers to secure a bit of sunshine. For now, the purple petasites has been left in peace to colonize the fully shaded area directly against the house. It is an uneasy truce aboveground – the real fight for resources remains below the soil.

I have no particular favorite to back, though I admit to pulling the odd rhizome when the mood strikes – much like a florist might remove a stem to create a more pleasing (but temporary) arrangement. 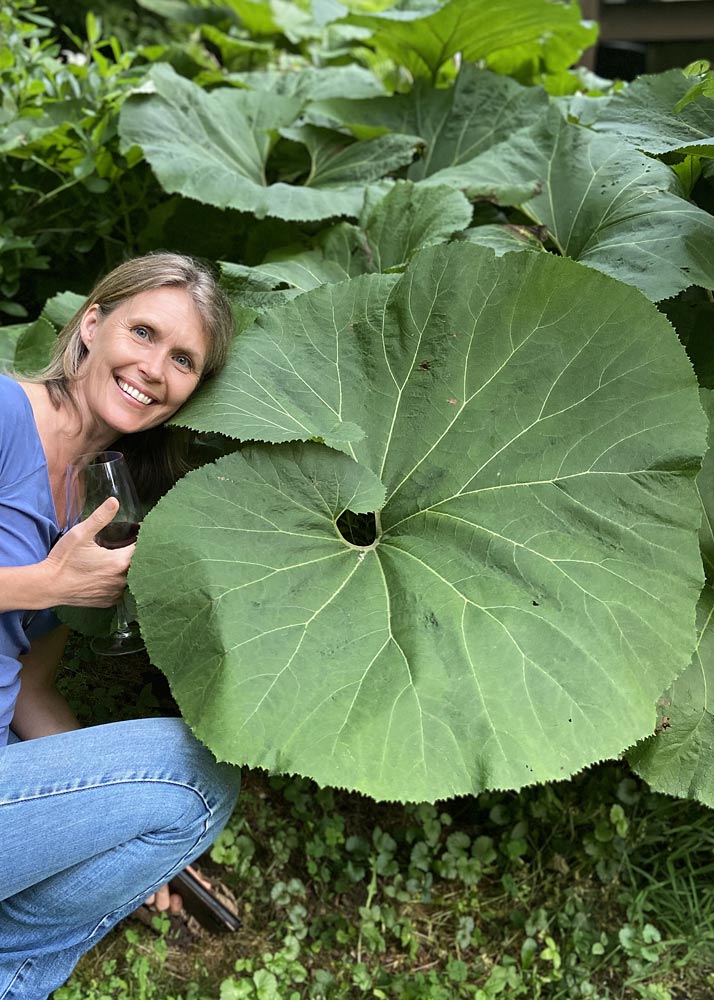 This sure looks like I have a favorite – but who wouldn’t want to show off those beautiful large leaves?

The area is a difficult one. It is a slope of thinly covered clay subsoil – a remnant of our home’s construction almost fifty years ago. Woodland and house shade plants for most of the day, only to revoke their protection from south facing rays during four of the very hottest hours. And then back to shade, and recovery. Leaves regain their turgidity as dusk falls and hands them an eleventh-hour reprieve.

The precious hothouse flowers of over-curated and over-reaching design schemes have long since been starved, burned, or dehydrated, and I am not saddened by it. They were the plans of a small space gardener finally faced with land and a million plans for it, but a distinct absence of staff wielding shovels and trowels. It came as a relief to watch the tactics of stronger species claiming the area with such enthusiasm – particularly as it is so visible from deck and kitchen. 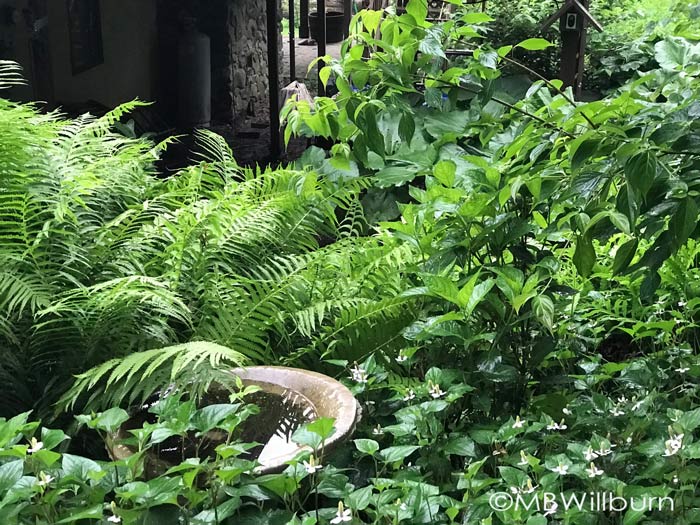 Such conditions are just too strenuous for many shade lovers. The bleeding hearts tapped out two years ago (both Lamprocapnos spectabilis and Dicentra eximia) – as did Onoclea sensibilis and Iris tectorum.  They have left no trace, though all were beautiful in the fleeting time they were with us – short seasons becoming ever shorter as they realized the extent of their predicament.

Theoretically I should take sides. Only one – the ostrich fern (Matteuccia struthiopteris) retains the favored child status of “native,” and therefore its aggressive behavior can be ignored and even blessed, much like that of the children of friends who evidently do not raise thugs and demons, but bright, precocious minds.

In other parts of the garden, the matteucia has smothered large outposts of native Arisaema triphyllum, and Dicentra cucularia. They are fully extinguished now and their destroyer conveniently absolved of ecological acts of supremacy. Had the petasites done the same thing……..well, it is an ideological conundrum for strict nativists that, to my shame, I enjoy bringing up over dinner when conversation grows dull.

A new reason to be delighted by this small battlefield arose yesterday, when my visiting niece – fresh from the arid scrublands of the California foothills – discovered this green forest of frond and fantasy.

She followed my Jack Russell into it one morning, and pronounced it her ‘own secret jungle.’ It is a hideout away from her older siblings whose superior height finally disqualifies them from something wonderful – a horticultural blanket fort for those who are tiny but worthy. 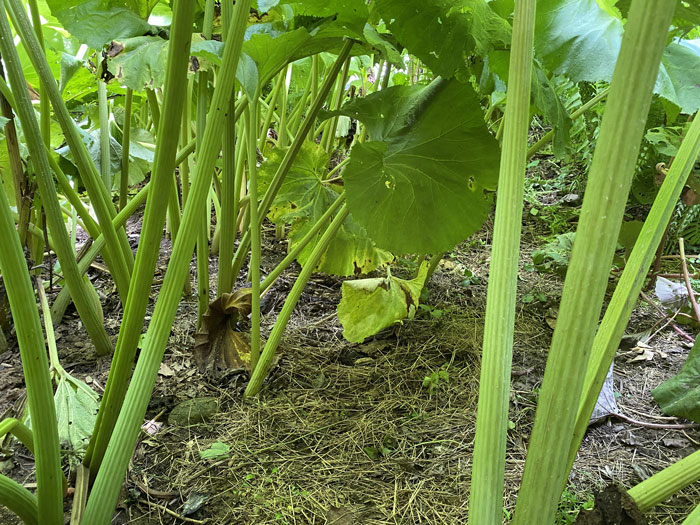 A forest for tiny children

By mid-summer all will be ravaged. Those south facing hours without sunblock take their toll on wide petasites platters, and another invasive – Japanese beetles – move in, feast on the fronds of matteuccia, mate, lay their eggs and die.  The houttuynia will not push further into the dry, graveled drive.

But right now – the warriors are strong and the odds feel even. It is a guilty pleasure to watch them fight. – MW