Fluffing Up for a Garden Tour

Our fluffed-up Louisville Garden was scheduled to be on the Garden Conservancy’s Open Days tour this Saturday. The Kentucky portion, with five gardens, got cancelled a week ago by mutual consent. What a pity. Poor communication, lack of publicity and e-ticketing upgrades, were the apparent culprits. 162 gardens, across the country, were still on board for the tour as of last week. 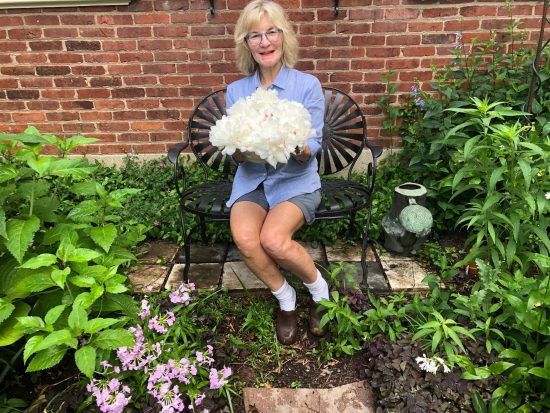 My wife Rose (Rose Bush, if you will) was in charge from our end. I stood ready to be the docent in a straw hat with cotton balls in his ears. This year’s tour would have been highlighted by the deafening drone of a gazillion cicadas.

Rose has eased up on fluffing, though garden chores continue in spite of the cancellation.

Planning and participating in a garden tour sound nerve wrecking, doesn’t it?

It shouldn’t be, but it is.

Of course you love your garden, but it’s hard to escape the anxiety of sharing your garden with the nosy wider world.

Rose and I have hosted garden tours before, and there is always the fight or flight response to fluffing it up. Not that it’s a rat trap the rest of the year, but there’s pride at stake when you volunteer to expose yourself and your garden, especially in the middle of  the frenzied mating season for the 17-year Brood X cicada. 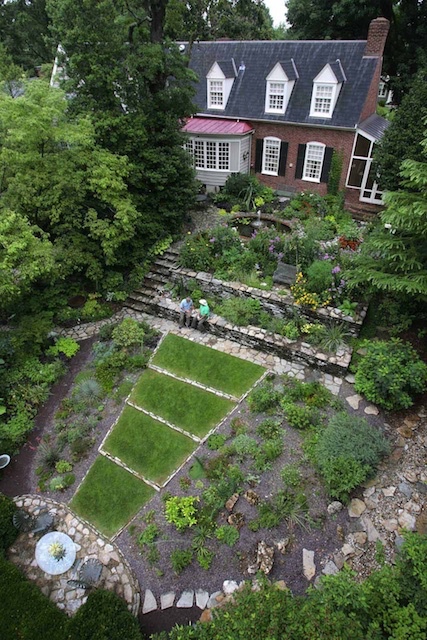 Over the years I have watched visitors move around our garden quietly and deliberately, like pollinating bees, never saying a word, while others stop and chat.

I don’t mind critiques, but genuine ones are rare. I wouldn’t mind more. I’m not so thin-skinned.

But go easy on Rose Bush.

Forgive our use of the occasional, garden-gimmicky name. She goes by Rose Cooper except on rare occasion.

We truly regret you won’t be able to walk away this weekend and be able to say:  “You don’t see a Rose Bush Garden every day.”

I abdicated control of our 1/3-acre-garden in Louisville four years ago so I could focus on a much smaller garden for my dotage in the country. That flash of common sense blew up. The small concept gets larger every year. Vanishing dopamine doesn’t seem to be depleting my ambition as quicky as I had imagined. 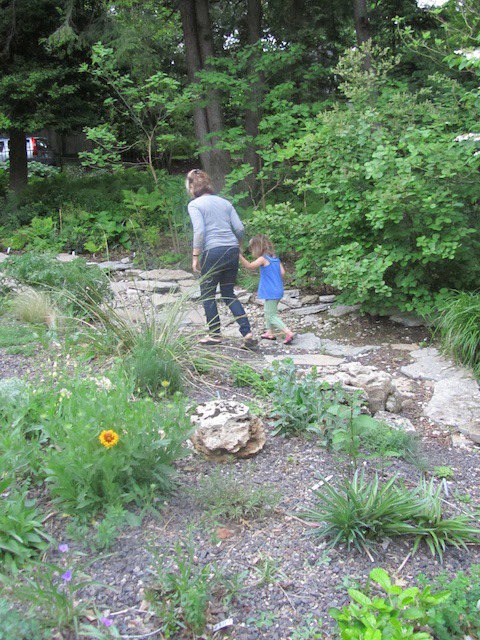 Rose and our granddaughter in 2011

There’s a lot of backwards looking this year.

I’m “reelin’ in the years” while my body aches and my mind reminds me I am too old to mitigate climate change singlehandedly by tending hundreds of  newly planted oaks, redbuds, yellowwoods, buckeyes and spice bushes on the farm. 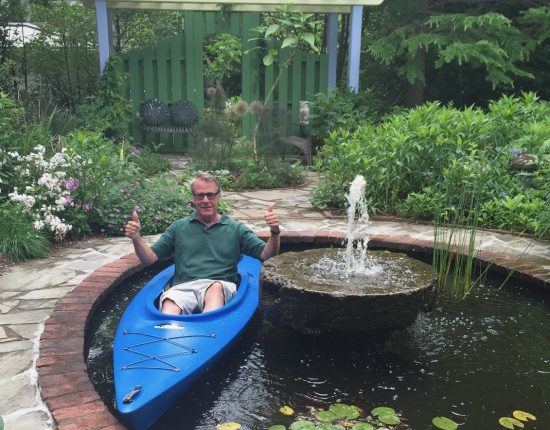 Snowdrops and trillium seem so long ago.

My thoughts for the future bring me back to Louisville and the garden Rose and I began 26 years ago. I’m just starting to get the hang of the place. I turned 70 last week. My childhood friend Walter Christopherson reminded me a few weeks ago that life was so much easier when we were 60. At least, there were fewer doctors’ appointments.

Rose has navigated the garden toward natural and left a lot of the heavy lifting to Richard Spalding and his talented Garden Artisan crew who are more detail-focused and thorough than either one of us.  For years, Rose and I spent 15 hours or more in the garden every week. If we went away for a week during the growing season, there was always the burden of  doubling the hours to catch up the next week. 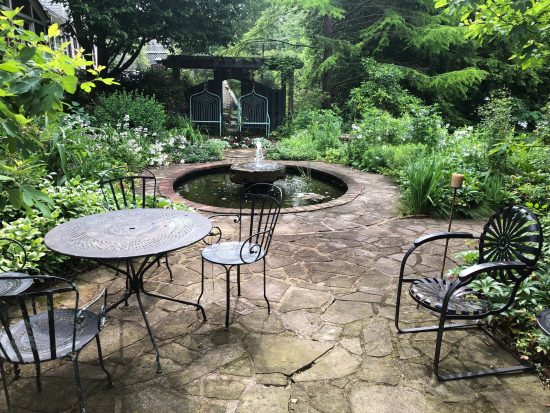 I love what Rose has done.

The scree garden, jokingly named “Putt-Putt at Machu Picchu,” is gone, and so are my uncontrollable impulses to plant so many rock gardens and alpine plants in our summer heat and humidity. Lewisia may be named in honor of Meriwether Lewis, but I have failed repeatedly to make his namesake feel at home in the Ohio Valley. (Cooler nights and a north-facing slope would help.) Lewis and Clark launched their three-year expedition to the Oregon coast in 1803 from Clarksville, Indiana, just a few miles from our home. I loved the scree garden, but it was a pile of pea gravel, mixed with a little loam, that needed more attention than I could give. Winter weeds were the worst. “Putt-Putt” is now a recommissioned patch of turf.

Rose has loaded up on bulletproof perennials in the garden beds: aromatic asters, Amsonia hubrichtii, Geranium sanguineum, hellebores, Japanese painted ferns, false Solomon seals, false asparagus ferns, and she has allowed an errant, seedling of Joe-Pye weed or two. Willfully mixed in, and not very natural, are annuals (cosmos, impatiens and salvias) and tender plants (dahlias, cannas and colocasias).

I still keep watch over a few uncommon plants like the American Astilbe biternata and Japanese Cardiocrinum cordatum var. glehnii that we’ve grown for years and that I can’t forsake. 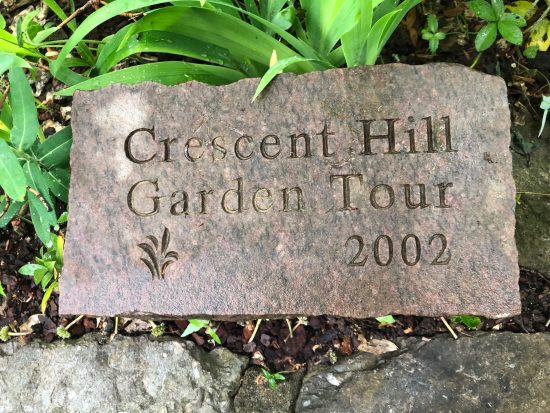 Rose and I have different approaches.

I’m serious; I agonize about the garden tomorrow. Rose is carefree; she is looking for excitement today.

Iris, peonies, baptisias and the glory of a memorable, and extended, cool spring have faded.

You won’t hear this chronic gardener’s regret from me: “You should have seen the garden last month.” Over the weekend I read Jim Harrison’s Then and Now—a 1989 essay from Just Before Dark, his Collected Nonfiction—a birthday treat. Harrison’s wisdom is worth heeding:. “Where have any of us ever been that some nitwit doesn’t tell is that we should have been there before?”

Our place looks wild this week. Fun-for-children-wild. It may be two weeks away from health department sanctions, but Rose walks a fearless, fine line. 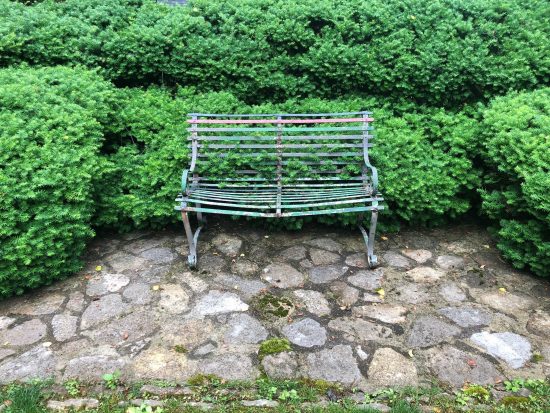 Summer is coming on.

Attention all breeders—professionals and hobbyists:

The late Harlan Hamernik, legendary plantsman and founder of Bluebird Nursery in Clarkson, Nebraska, suggested the idea several years before he passed in 2012.  Imagine how easy garden centers  would have it when customers came in to ask what they recommended for the best rose bush. There would be no need to dither. “Yes ma’am, that would be ‘Rose Bush.” ***