That time I started a “native” prairie 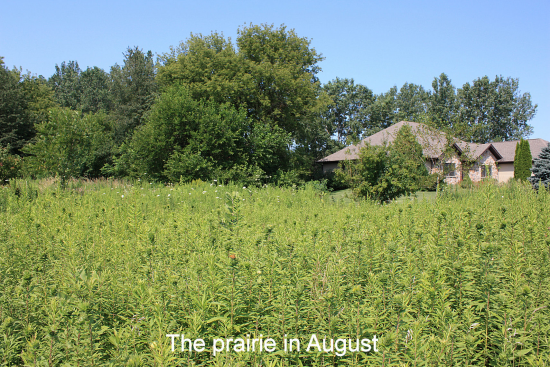 Our current home of eighteen years is sited on a one-and-a-half acre lot, originally part wooded and part field. I had told the builder to leave a section of the field undisturbed, thus earmarking this land for what I hoped would be native prairie. I opted for this rather than preparing the soil and buying bags of “instant prairie” seed. It would be interesting to see what popped up in the field.

I acquired native plants for our flower garden, but at first did not add anything to the prairie, leaving it to Mother Nature to decide what to grow there. I eventually departed from plan by adding two Viburnum trilobum bushes to provide food for the birds. I probably should have referred to this “purely native” prairie as a “natural” area instead. Yes, native plants such as Milkweed and Goldenrod did sprout. But a lot of nonnatives also appeared, such as Chicory, various clovers, Peppergrass, Mullein, Queen Anne’s Lace, Rocket Larkspur, and Yellow Goat’s-Beard. I guess they’re ubiquitous.

The first thing I realized was that a natural area is not maintenance-free. There were some annoying things I wanted to get rid of, such as ragweed and various burrs. Ragweed has fairly shallow roots; it can simply be pulled out of the ground, even the giant variety. The burr plants were repeatedly pulled out before they had a chance to set seeds, though I’m still doing battle with burrs here and there. I used spot weed killer on the broad leaved Burdock. Early-on, I allowed wild roses to grow, only to discover they have absolutely wicked thorns. They had to go. Wild grapes looked interesting and fed the wildlife, but they soon intertwined among everything else. They had to go too. But was this going to be a natural prairie after all? It seemed as though I was really messing with nature.

Another discovery: the adjoining wooded area wanted to invade the prairie. I was constantly pulling and digging out little trees. Some were box elders that seeded themselves willy-nilly. Black walnut and mulberry trees were planted by squirrels and other critters. Ultimately, I left a few trees along the edge of the lot. 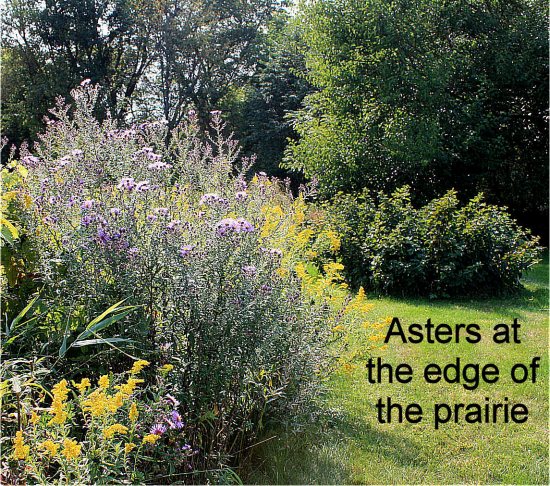 I had hoped to maintain a wide variety of plants, even nonnatives, but over the years the Goldenrod spread aggressively; in fall, the prairie is a field of yellow. In order to allow other plants room to grow, some of the Goldenrod must be periodically pulled out. The grasses (native and introduced) are also vigorous growers—a judicious spray of Grass-be-Gone controls them. Every now and then, some new plant turns up. For example, there is now a large clump of native Smooth Blue Asters (Symphyotrichum laeve) that somehow migrated from the other end of our property. They seem as tough as the Goldenrod, demanding their own space.

Another item of maintenance is what I would call “grooming”. A couple of our neighbors on larger acreages also have natural areas where they do controlled burns to help deter invasives and clean up dead plants in early spring. They suggested that I do the same, but I’m leery of using fire; instead, after the snow melts, I run the lawn tractor over the prairie to mow down the previous year’s dead vegetation. It also serves as an opportunity to cut down any wild rose and grape vines that I missed during summer trimming. During the growing season, it’s also a good idea to keep a mowed path through the prairie for easier access. And I initially kept the prairie mowed down along the property line so it wouldn’t intrude on my neighbor’s lot.

Along the way, I’ve learned that a technicolor extravaganza is the stuff of fantasy. For a large part of the year the prairie simply looks like a green, overgrown field. My wife doesn’t get it— she refers to it as “that mess out there.” But up close, you do see some interesting things growing.

Is it a success? During warmer months, it’s alive with birds, bees and butterflies. In the photo of the prairie, you might notice a small orange-colored spot, which on closer inspection turns out to be a butterfly visiting a milkweed. Trampled down grass indicates where deer have bedded down for the night. But here’s what I consider the ultimate measure of success: my next door neighbor asked me to stop mowing the strip along the lot line and allow the prairie to grow over onto their property!