Step away from the sprinkler 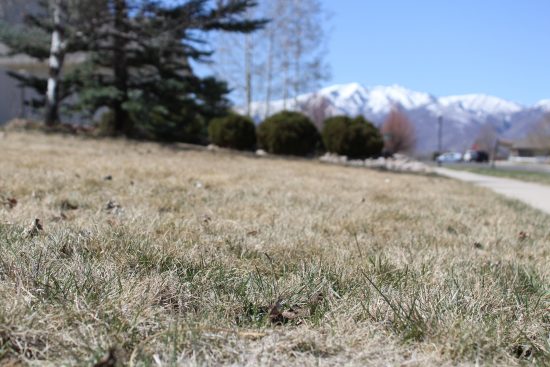 It was March 17. We had to leave the park earlier than the four-year-old wanted because the one-year-old needed a diaper change and a nap. Much whining ensued. I wouldn’t stop to buy an ice cream cone at the burger joint, the mile-long bike ride home was all uphill, and at 53 F was “too hot”. To top it all off, the water bottle was empty. Cue more whining. When we finally made it home, I got the baby down for a nap, and my daughter asked if she could run through the sprinkler. I paused for about 2.3 seconds to ask myself if our lawn (shown above) needed to be watered. It most definitely did not; it was the middle of March after all. But I figured this would still provide twenty minutes or so of easy entertainment. So we dug out the hose and the sprinkler, got the swimsuit on, and away she went.

Later that day, I saw on the news that the governor of Utah had issued an executive order declaring a state of emergency due to the state’s extreme drought. When my daughter asked me that night if we could run through the sprinkler again the next day, I explained the concept of a drought and told her that we wouldn’t be running through the sprinkler anymore until the grass really needed to be watered. The next morning, I overheard her explaining to her dad that “We can’t run through the sprinklers because then the farmers won’t have enough water and then we won’t have any food!” Perhaps a tad on the dramatic side, but at least she gets it!

Too bad the adults of the world are harder to convince.

Since our little escapade, I’ve seen multiple other lawns being watered. And without any four-year-olds running through the sprinklers to justify it!

In the mountain valley where I live, we’re still routinely dropping into the 20s at night. Gradually, the soil temperatures are warming, but the grass (predominantly Kentucky bluegrass in these parts) is just beginning to break dormancy. It’s not dead; it’s just not actively growing yet.

Droughts aren’t new  here, so we should know the drill by now: wait as long as possible for that first irrigation; when you do start to water, do it less frequently but for longer stretches; mow higher and leave the clippings where they fall. Use drip irrigation for flower and vegetable beds. Mulch, mulch, mulch.

However, with 90% of the state in “extreme drought” and over half the state in an “exceptional drought” situation, perhaps “extreme” and “exceptional” measures are called for. Evaluate how you actually use your lawn area, and if you find that the only time you walk on it is to mow/maintain it, now is probably a good time to change it to something else.

At the very least, let me know when you turn your sprinklers on so I can send over my swimsuit-clad four-year-old to take advantage of it.

Heather Olsen is a horticulturalist and weed scientist by training. In practice, she is a part-time researcher, hobby gardener and writer, and full-time mom. She gardens in Utah.