Praising and *Defending* the ‘Ogon’ Spirea 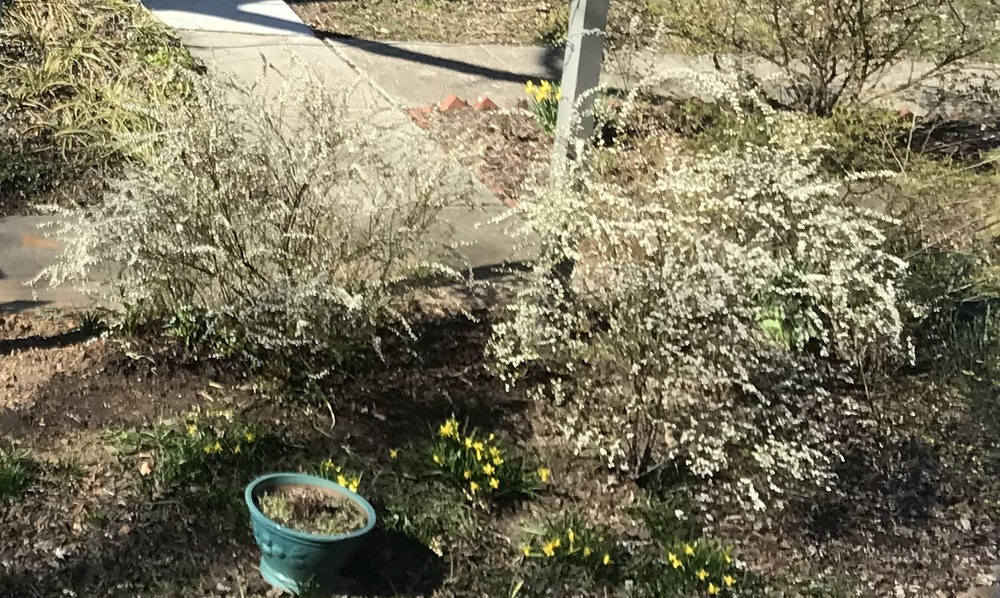 I’ve grown several spirea shrubs over the years but it wasn’t until I found the ‘Ogon’ variety that I became thoroughly smitten, recommending it to the dozens of people who’ve asked me about it admiringly. Here’s why.

The photo above, taken March 8 of last year, shows how early they bloom – with the ‘February Gold’ daffodils, even earlier than forsythias near me. 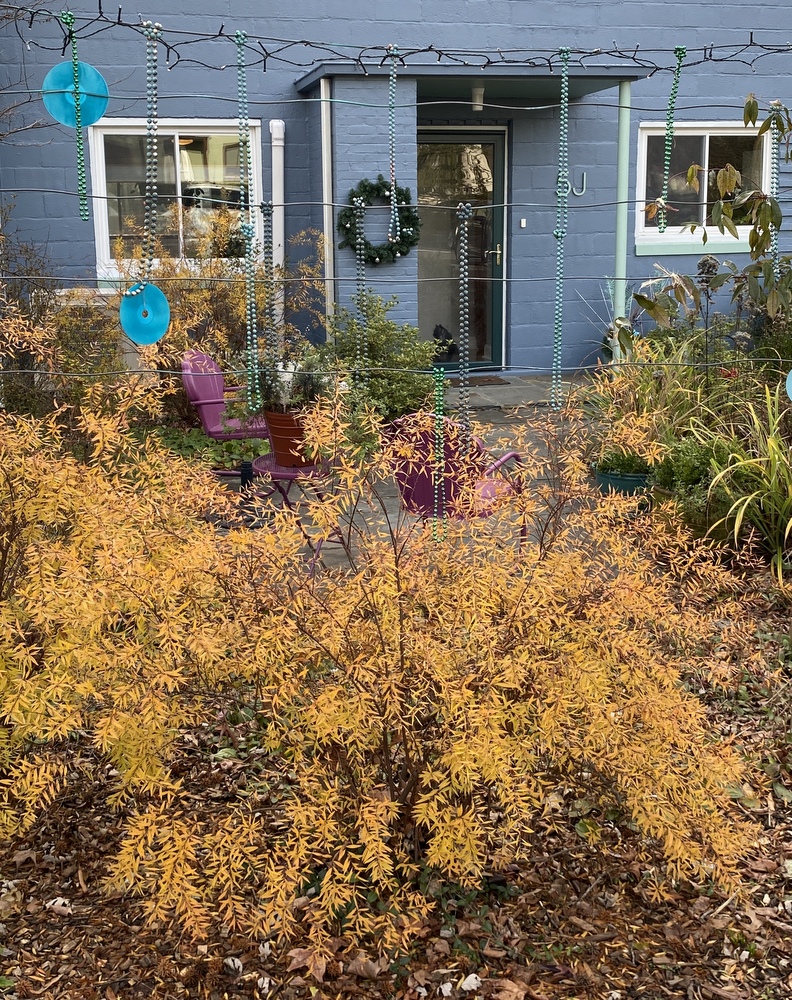 It also has fabulous fall color, which it maintains for an impressively long time – so long that I kept photographing it over the winter so that I could record its last date with leaves.

And the result? The wreath is a tip-off.  I took the photo above on December 23, just before it began dropping its leaves. Pretty impressive, right? 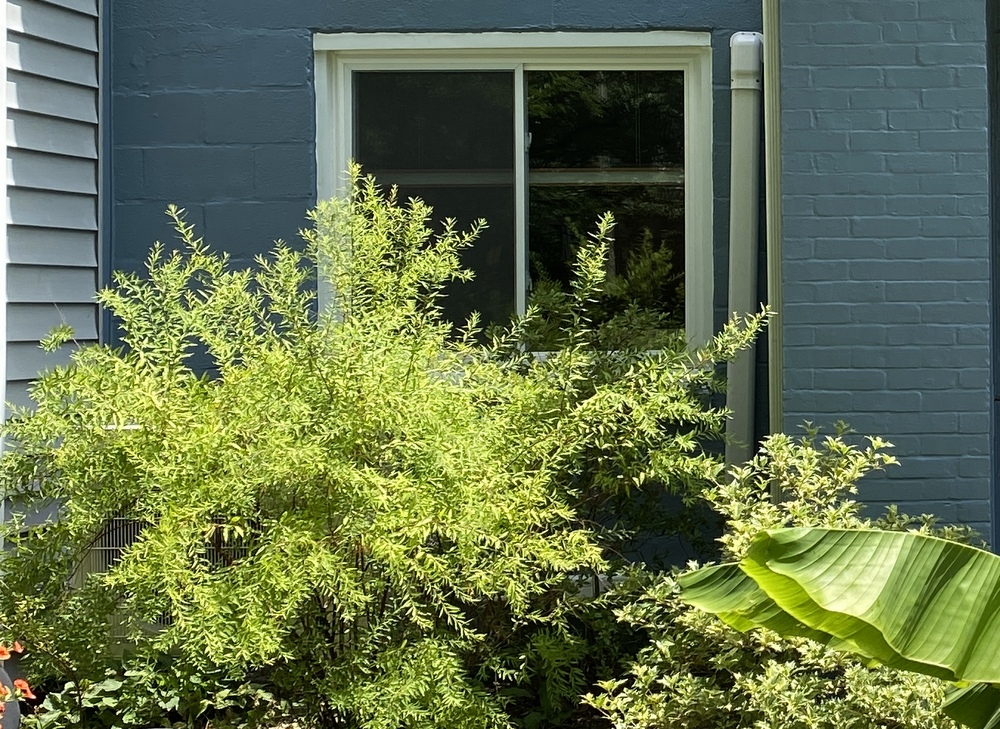 And here’s what it looks like the rest of the growing season – willow-like foliage and bright chartreuse color that people go nuts for.

I was prepared to brag about Ogon’s 10 full months of color. 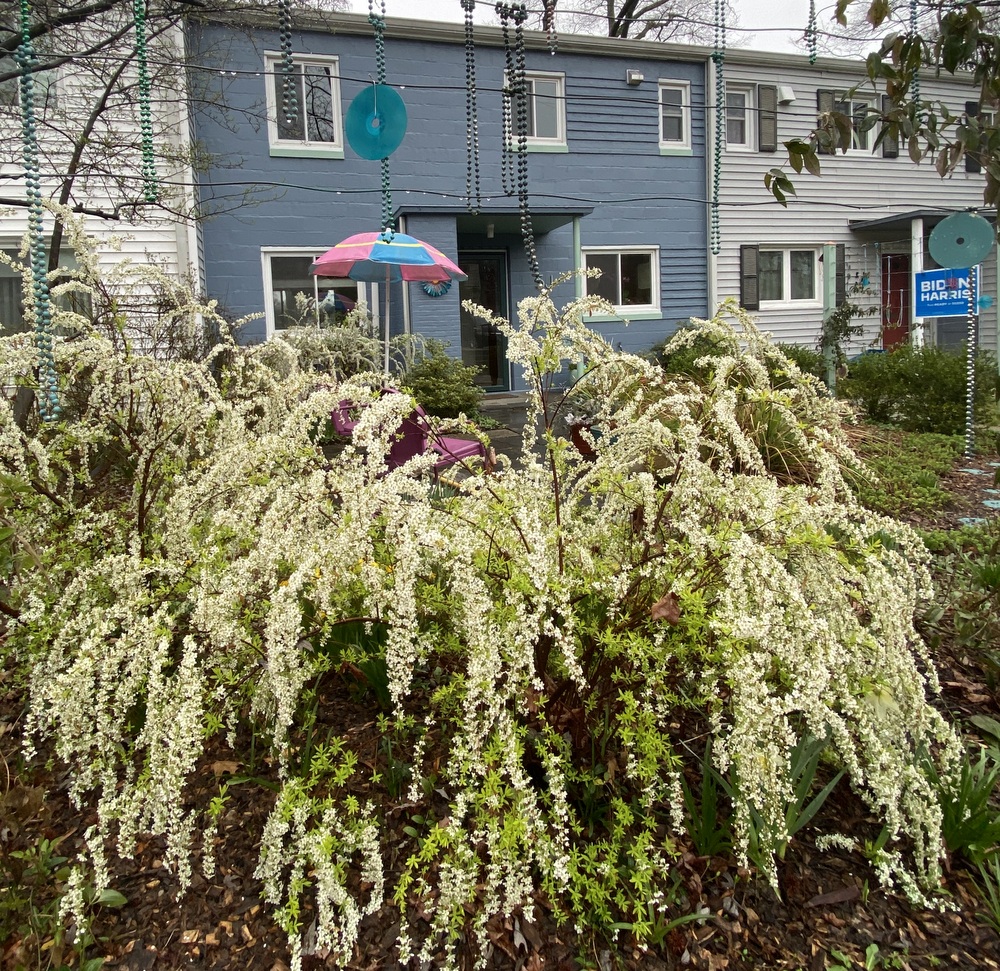 Until this spring, when my Ogons didn’t flower until the last week of March. But still – 9 months of color!

It’s pretty, but what use is it?

Sadly, it’s controversial these days to recommend plants solely for their beauty. But in my gardening and garden-coaching experience I’ve found that beauty counts for a lot because that’s what inspires people to garden more, to fill up their little spaces with more and more plants, more diversity, less lawn, and so on. Beauty wins converts to gardening, just as the failure of plants to look good can discourages new gardeners.

Then we get to the eco-service that native-plant purists seem to focus on exclusively – “attracting wildlife and promoting biodiversity.” Shrubs, including Japanese spireas, create habitat for some birds, possibly other critters, too. Some of them even feed pollinators. A quick google of “spirea” reveals that:

Then there’s the fact that spireas (in my 40+ years growing them in Maryland) need NO inputs. Okay, newly planted ones may need supplemental watering until established or in a VERY long drought, but really, nothing else. Okay, five minutes of yearly renewal pruning after they’re full-grown, just enough to encourage new growth from the base.

But that’s all, so in terms of sustainability, spireas are as self-sustaining as can be. That reminds me of the time I mentioned spireas during a talk about “sustainable gardening,” which prompted an angry complaint to the organizers of the talk. Disapproved of spirea’s Asian provenance.

In the end, aren’t we all just trying to convince people to do more with their yards than grow turfgrass? If they’d all just turn some of it into borders with a mix of shrubs and perennials, both native and nonnative, that would be a huge improvement!

Shaming people for growing such beautiful, well-adapted nonnatives is counter-productive. So I take the garden-coach approach of recommending plants that create pretty spaces that will be loved and gardened in. I say help create a gardener, a well informed one, and the environment will be better for it.

One big help are the fast-growing, inexpensive spring-flowering shrubs like spirea and weigela. They can be the gorgeous backdrop for your pollinator garden.

Just don’t believe the tags that tell you these shrubs they need full sun. For maximum blooming, sure, but they’ve done well for me with just a couple hours of sun. For the Ogon especially, people grow it mainly for the foliage, anyway, not the blooms. 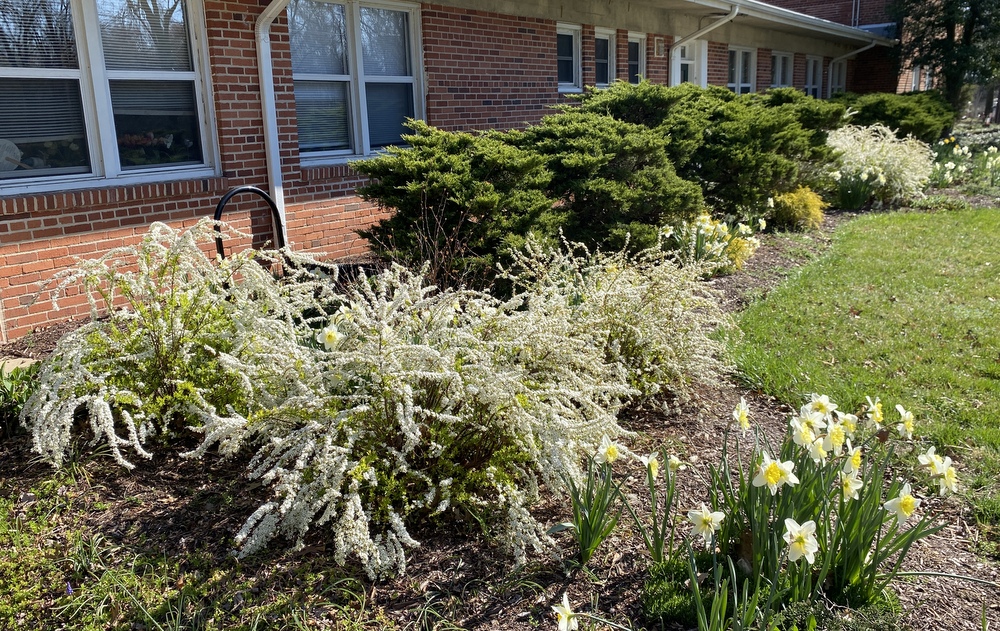 Here are some Ogons I planted at my coop’s offices, along with the later-blooming and -leafing-out Ninebark shrubs and beds filled with pollinator-pleasing perennials – all native, I believe.