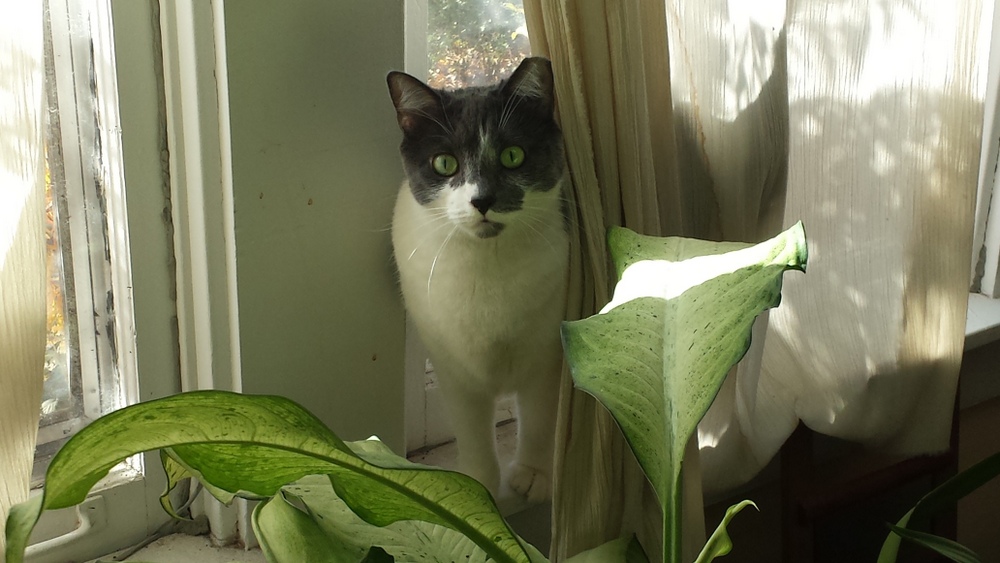 If you have a cat—not own a cat, because you own a cat perhaps the way you own a head cold—and you have indoor plants, you are familiar with the “plant question.” That is to say, what side is your cat on when it comes to your plants? There are three sides: yours, the plant’s (which is often not the same as “yours,”) and the cat’s. From what I’ve gleaned, 95 percent of the time, the cat wins. Another 4.9 percent of the time, the plant wins. You know where that leaves the plant owner. Do the math.

The cat can win in many ways. Certainly by chowing down on your plants. But that’s dangerous because there are more plants that are toxic to cats than there are galaxies that have been discovered by the Hubble Space Telescope in almost 30 years of floating around our planet—even after you consider that the telescope was as blind as Mr. Magoo for the first three years of its illustrious life. The cat can also knock potted plants onto your white carpet, though having a white carpet in the first place is a way of turning towards Fate and sneering, “Nyah, nyah!” Fate is not amused.

Or the cat can snub the plants. That’s the strategy of our cat. Her name is La Gata, having to do with two things: the basic ethnicity of our neighborhood, and the fact that I didn’t want a cat, so her name was going to be “The Cat.” If that’s the case, my partner Kathleen argued, at least put it in Spanish. So, for a short while, her name was El Gato, until we figured out the gender thing. About Spanish, not the cat.

La Gata showed up in our backyard one fine, summer evening, came up onto our porch and began purring. And purring. And rubbing against our legs. And being adorable. And looking into our souls with big, round, uncat-like green eyes. “Do. Not. Bond. With. That. Cat.” I ordered Kathleen.

And then I bonded to the cat like she was covered in Gorilla Cat Glue. You know how cats aren’t supposed to look you in the eyes? I say to her, “Don’t look me in the eyes.” She says to me, “I’m looking you in the eyes.” I say to her, “Well, stop it! The cat websites say you don’t do that.” She says to me, “That’s what you get for trusting the Intertubes.” So now we owned—er, had a cat, and I had a few dozen indoor plants, ready to be ravaged.

Except La Gata didn’t ravage. She snubbed. Cut them dead, but only metaphorically. She refused to nibble on them or to test the laws of gravity by pushing them off bookcases and plant stands (just dirty, desperately-in-need-of-sanding hardwood floors and a few throw rugs in our home, thank you very much), or to dig in the potted soil. None of it. Once in a while, she sniffs at the containers, gives an “I can find something more interesting” look and moves on to something more interesting.

By the way, when it comes to climbing in general, I liken our cat to a superhero with amnesia. She doesn’t seem to realize that she has superpowers—in other words, doesn’t understand that she’s a cat and can leap tall buildings with a single bound. Or could, if it ever occurred to her. 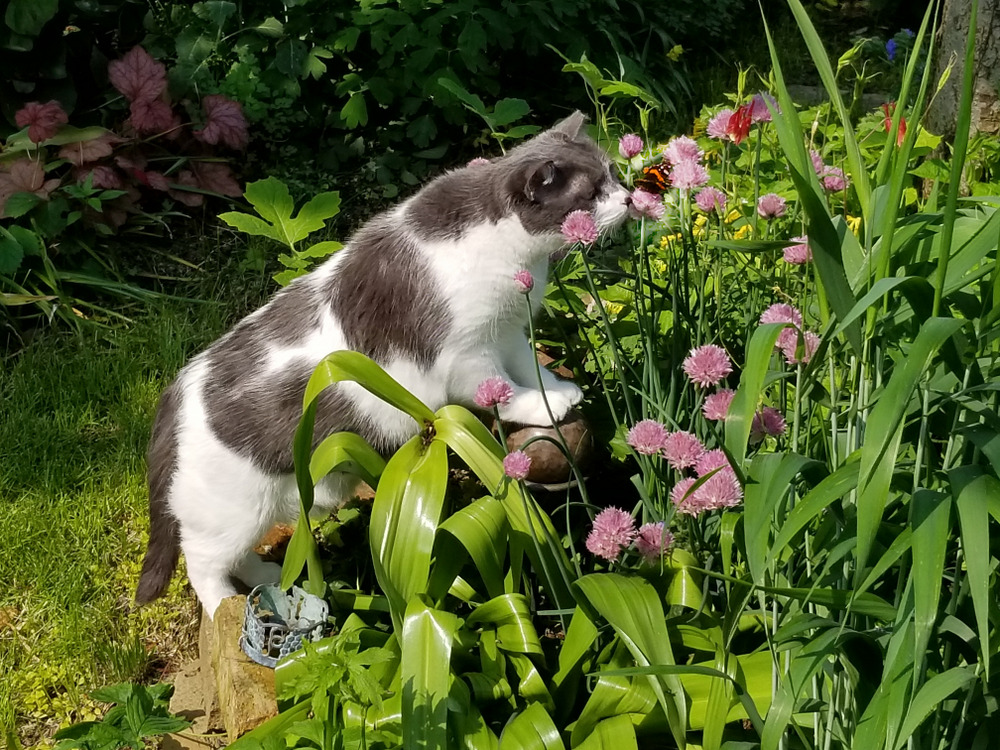 No butterflies were harmed in the shooting of this photo.

Which takes us to the outside world. I know, I know, you’re not supposed to let cats outside because of the carnage they can cause. Except that she doesn’t seem to cause any carnage. No dead birds. No dead mice “presents.” No smushing my sedges into oblivion. The birds flit overhead and if they pay attention to her at all, they tweet, “Oh. It’s just La Gata.” But La Gata doesn’t approve of Twitter, either.|

Prowling through my jungle of backyard plants and escaping detection is one of her few tricks. Once, as a last resort, I had to turn the hose on her to get her indoors. Actually, I turned the hose on a particularly dense clump of plants and she jumped out. That hasn’t been necessary since. Which is a shame because it was really fun. For me. But I’m no longer named in her will. That hurts.

She does try to escape the yard from time to time, until I figured out how to “cat proof” the wrought iron gates with some three-foot-high plastic netting. I’m serious—that is the sum and substance of my remedy. Remember the amnesia thing? It seems to apply to the outside world, too. If our yard were Alcatraz Federal Penitentiary, the netting would be San Francisco Bay.

Even when I’m gardening in front of the house, she sits on the porch and points out when I miss pulling a weed. People say, “Aren’t you afraid your cat will run out into the street?” I’m actually more afraid that my cat will unlock the secret to dark matter in the universe and win the Nobel Prize for physics. She occasionally does her cat burglar routine, trying to sneak down the front steps. I give her a “Hey. Hey!” and she cat burgles back up the stairs to the porch.

Goofy, sweet, endearing and plant-friendly. That’s my kitty. If you’re waiting for me to say something even a little bit cynical, keep waiting, bucko. It ain’t gonna happen. Now, can anybody tell me how to get Gorilla Cat Glue off my hands? 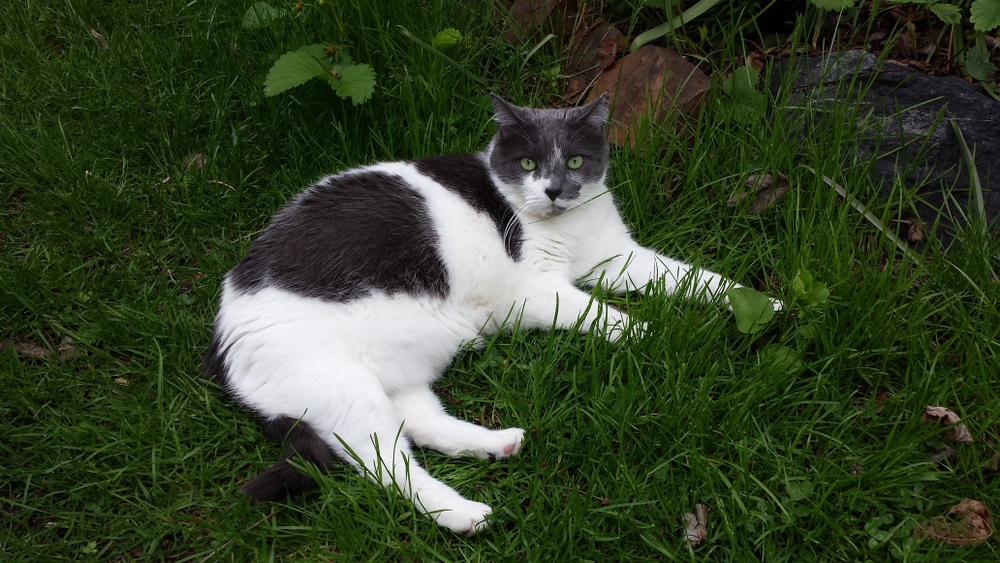 About the Author: Mike Nowak

In 2021 Mike Nowak celebrates 24 years talking about gardening, the environment and green living on Chicago radio. Before going “strictly internet,” Mike hosted programs on WGN Radio, WCPT 820AM, Que4 Radio, and WCGO 1590 AM. For two seasons, he was co-host of the local gardening and food TV program Dig In Chicago. His award-winning column was on the inside back page of Chicagoland Gardening Magazine for sixteen years before that publication’s unfortunate demise. In 2014, Around the Block Press published his first book, Attack of the Killer Asparagus and Other Lessons Not Learned in the Garden. He is also a popular speaker on the garden club circuit (currently via Zoom). 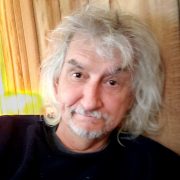