Once Upon a Childhood Oak Tree 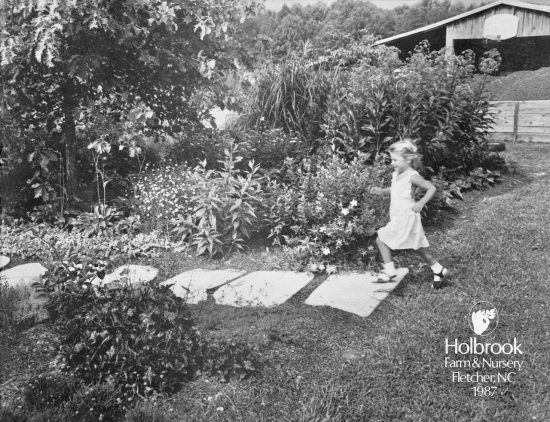 “Every oak tree started out as a couple of nuts who stood their ground.”     Henry David Thoreau

I have been inextricably bound to one swamp white oak since I was seven years old. For many years, I could only identify the oak, across the street, as a tree— one bigger than other trees. I wasn’t born a naturalist. I learned the hard way how to identify poison ivy by first grade but couldn’t tell the difference between an oak and a maple until I was in my early 20s.

I spent my early childhood playing in the woods at the end of a Louisville suburban cul-de-sac. A half-dozen boys gathered there daily to explore a small patch of wilderness. Our mothers tossed us out of our homes and told us not to come back until mealtime. Our woods were far from primeval. It was a cut-over, scrawny mix of maples, elms, basswoods, black cherries and an occasional oak.

Our getaway wasn’t more than a quarter of a mile from one end of the frontier to the other. It took most of a morning to follow a beaten path, beside a tiny stream, poking the ground with sticks, until we reached Little Niagara, a waterfall that cascaded over limestone bedrock. Little Niagara was barely three feet tall. None of us had seen the real Niagara Falls, but our Niagara figured mightily in our infinite universe.

We built crude wooden bridges that washed away in heavy rains and even attempted a tree fort in a dying maple. My father brought a hammer and nails to help out, but quickly lost interest. Home and woodland projects were not his calling.

After a few hours of watching dad grow more frustrated we were ready to move on to trying to catch water striders, anyway.

The crude framework of our rickety castle turret was left to rot for the next 25 years.

Dad wasn’t very handy, neither was I. He once told me that I handled tools about as well as a bear with boxing gloves on.

The acorn doesn’t fall far from the tree.

When I was seven, we moved a block and a half away. I didn’t give serious thought to what was under my nose or over my head for many years to come, but I absorbed so much that I can only vaguely describe now.

My mother paid closer attention to details.  She also liked rituals. Nasturtiums were always planted on Good Friday. Tomato plants were planted after Derby Day (the first Saturday in May) against the south side of the house where they would stay a little warmer to ward off late frost.

Baseballs and footballs were not good garden companions. By my early 20s I gave up ball games and began to look closer at what was growing  around me.  My new obsession with gardening, cultivated alongside a degree in sociology, begged a deeper understanding. 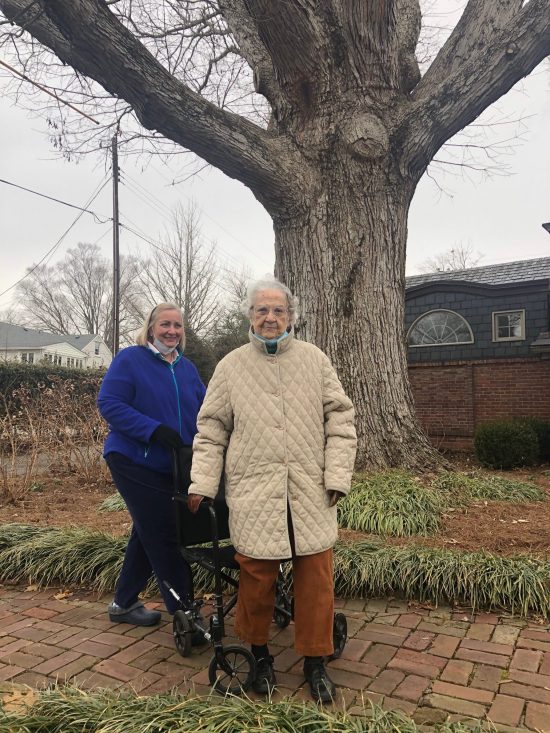 When I was 21 the Gray family moved across the street.  Mrs. Gray had a nice flower border. (A flower border sounded so grand, compared to a flower bed.) I began to visit Mrs. Gray occasionally. She would always encourage me, give me a tour and point out spiderworts, peonies and daylilies.

The front yard, however, held the not-so-hidden treasure.  I had passed the big oak tree hundreds of times. (I could identify the difference between and oak and a maple by now.) It resembled a white oak.

I sowed acorns from the tree in mom’s back yard in the mid-1970s. Mom had begun an inspirational small shade border of her own. Dad went golfing.

I moved to Fletcher, North Carolina in 1979 and started Holbrook Farm and Nursery. One of the first trees I planted was a small, walking stick-sized bare root oak that originated from Betsy Gray’s acorns.

Mike Dirr and Allan Armitage brought their University of Georgia horticulture students to visit Holbrook Farm every year. This was a  sharp group. I asked Dirr what kind of oak tree this was. He sharpened his eyes, pawed his feet like a cornered bull, and said it was “probably” a swamp white oak (Quercus bicolor). Dirr explained there was a reasonable chance that it could have crossed naturally with a white oak (Quercus alba) cousin.

I gave up the nursery in 1995 and eventually sold the farm to my friend and former Holbrook employee, Jeremias Ramirez. 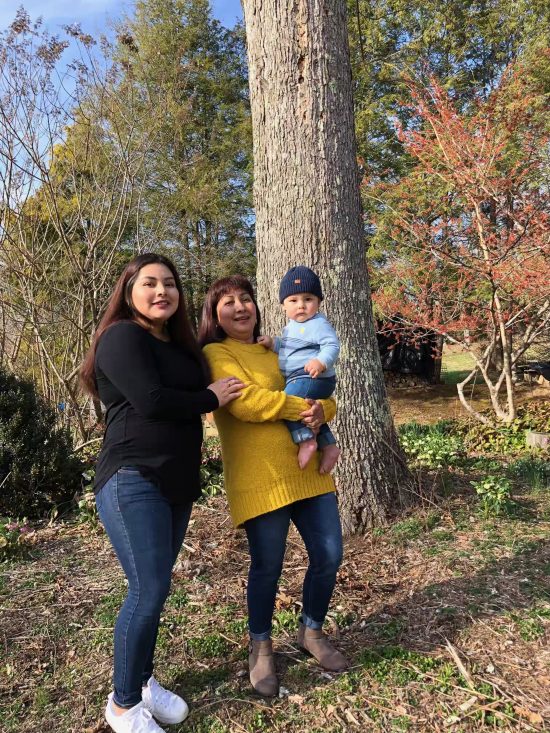 I gathered acorns from the Holbrook tree around 2015 and planted them back home in Kentucky. Squirrels made off with most of them. A handful survived and were planted on our farm in Salvisa, Kentucky. They are now six 6-footers, protected  from deer who want to graze branches and rub the bark off the trunks with their fuzzy antlers during the fall mating season.

I became curious again about the old Louisville swamp white oak a few years ago. I made devotional drive-bys. The tree looked very good, and obviously much bigger than when I’d first seen it 62 years before.  I got in touch with current oak tender and resident Briggs Harrison. She said she’d worked carefully with Robert Rollins, arborist and co-founder of Greenhaven Tree Care, to look after the oak.

I called Robert, who is a good friend, and quizzed him. I gave him only a sketchy hint. Did he know a big oak tree in my old neighborhood? Without a moment’s hesitation, he answered. “The swamp white oak?” Yes, I replied. “I’ve been in the tree,” Robert said proudly. 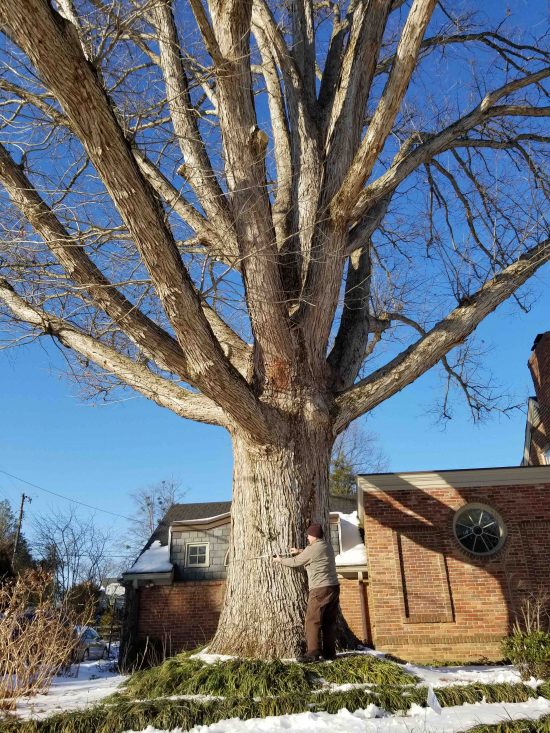 I met Betsy Gray and her daughter Holly a few weeks ago at the swamp white oak. We talked about the tree and its progeny. I asked Betsy if she’d given me acorns or if I’d stolen them? She laughed. She couldn’t remember. Neither could I.

Robert Rollins, the arborist, told me a few days later that the measurements he took, coupled with a method approved by the International Society of Arboriculture, put the tree at somewhere near 217 years old.

In or around 1804 the swamp white oak started life in what was then woodland Kentucky. (Henry David Thoreau was born 13 years later.) Why the tree, over its long life, was not chopped for timber, eliminated by potato farmers or dealt a blow by subdivision developers remains a mystery.

In my lifetime, the swamp white oak has withstood a tornado, powerful straight-line winds from a remnant hurricane, and devastating ice storms.

The swamp white oaks’ roots run deep and far. The rich, Crider silt-loam soil sustained and anchored the tree. The roots extended 100’ beyond the tree’s dripline, across the street to my childhood front yard.

A mere 217 years old doesn’t necessarily put the oak in the big league with longer-lived trees. There is an individual bristlecone pine in California that is over 5,000 years old, but no tree of my memory is older than the swamp white oak of my childhood.

Thoreau got it right.

A couple of nuts, some known and others unknown, stood their ground.