Be Gentle with the Land

For some people in the UK making a new garden means getting a designer in, or at least thinking radically about what to keep and what to change. This may then be followed by bulldozers and backhoes – or JCBs, as we call them in the UK.

We were never able to afford much land sculpting of that kind. A little was inevitable – just levelling for a pool and a path, and the removal of a dead tree and a large amount of soil by the house. We have large sloping areas which we couldn’t even think of terracing and on the whole we have left the land the shape it was when we came.

Meadows and not so much meadows.

When we came, the two acres which have become the garden were mostly grass. And we were rather cavalier about that, though I’m happy to report that the idea of a ‘meadow’ was fashionable enough for us to keep quite large areas of what transpired to be ancient pasture. 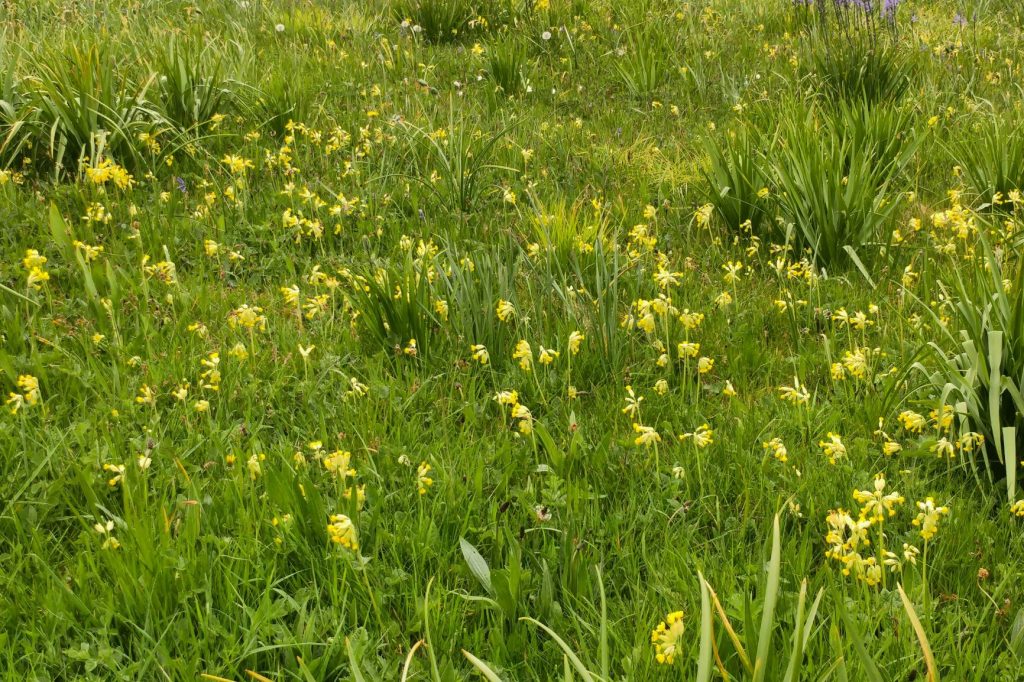 We learnt how to garden an ancient meadow, and the cowslips are very happy with it. 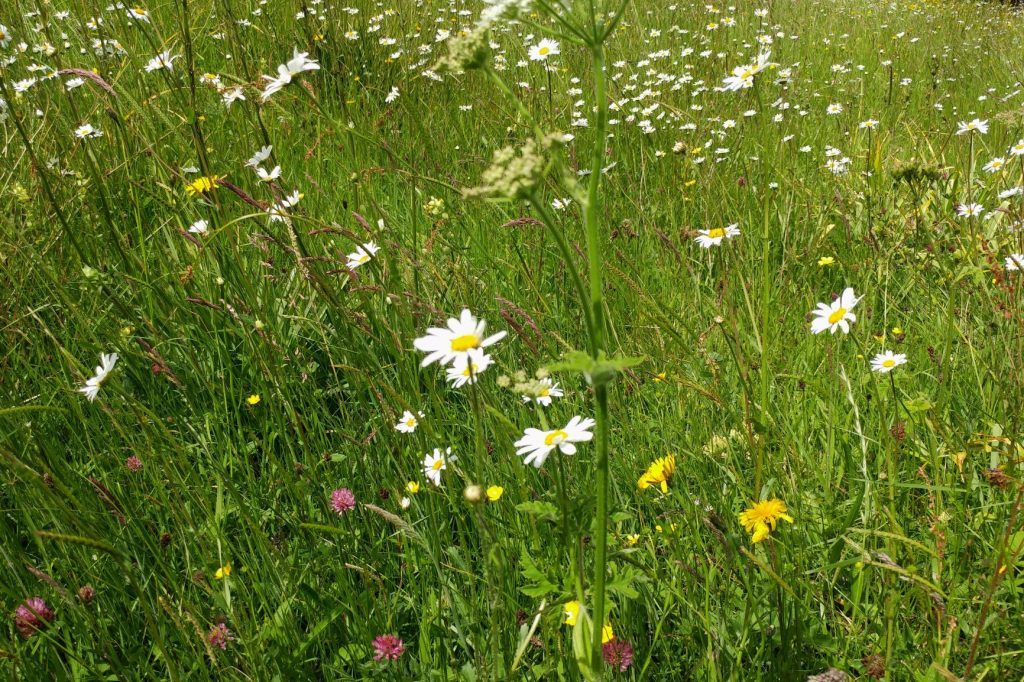 They are followed by this sort of thing… 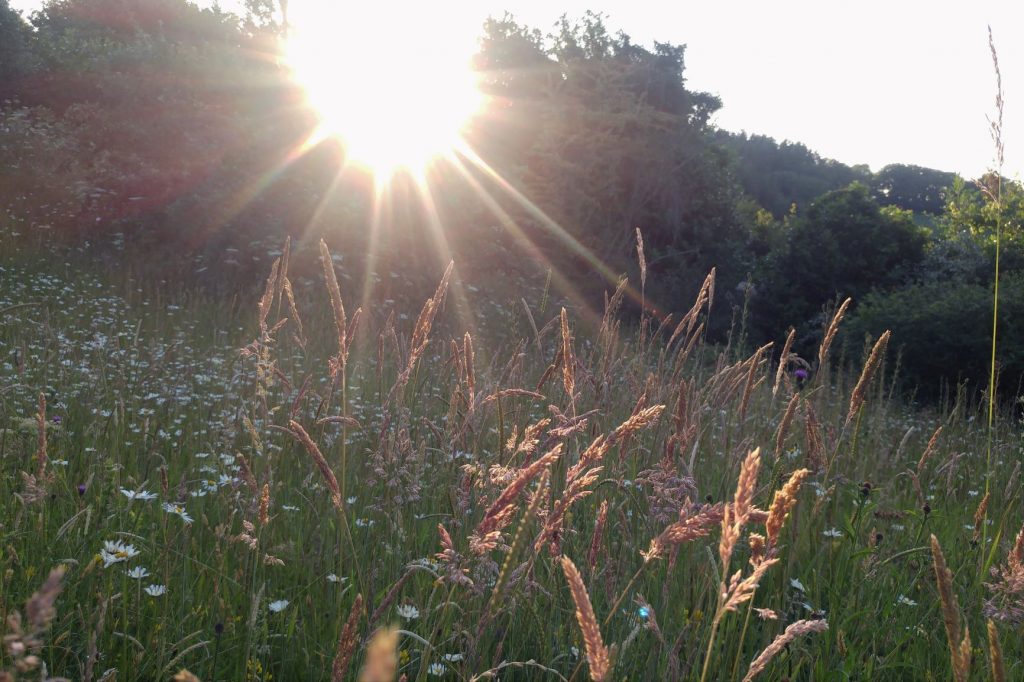 and this! (I love a bit of backlight…)

Sadly, it has become a big thing here in the UK for people to dig up boring old meadows like these, which are rich in plants adapted to and belonging to the local ecology, and which offer as much or more to the environment in carbon capture as woodland. They then transform them into that which has become known as a ‘meadow’ or ‘annual meadow’ by ploughing or digging and sowing annual flowers. The progenitor of this model is an arable field full of weeds, now reproduced with no arable crop. As below. 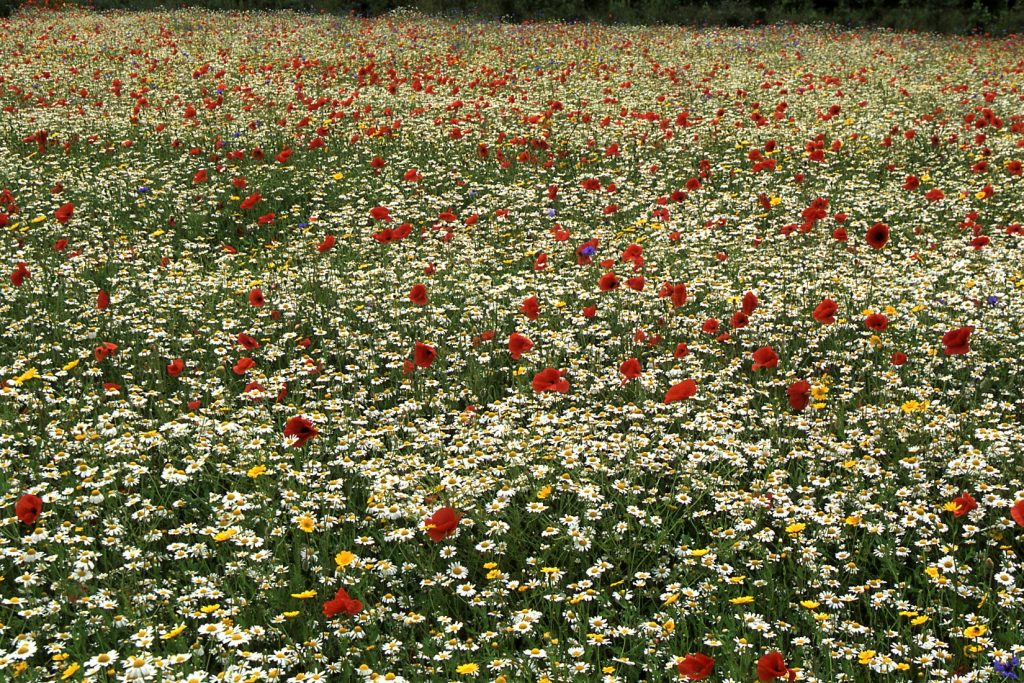 I think if we had had had lots of money, we might have done some regrettable damage.

It has been my interest in our local history which has possibly saved me from miserable mistakes like that and also made me look carefully and keenly at what the garden is telling me of its past.

For example, we have one piece on the edge of our land which didn’t make any sense – it just sort of sticks out into a field. But in time I came to understand a lot about this strange configuration.

First that it is the remnant of an old lane. Part of that lane is now our drive but our garage is now built right across it, so it’s very easy to not realise that it was once a public lane – and that the lane went on into a field. (Then where? I don’t know!) 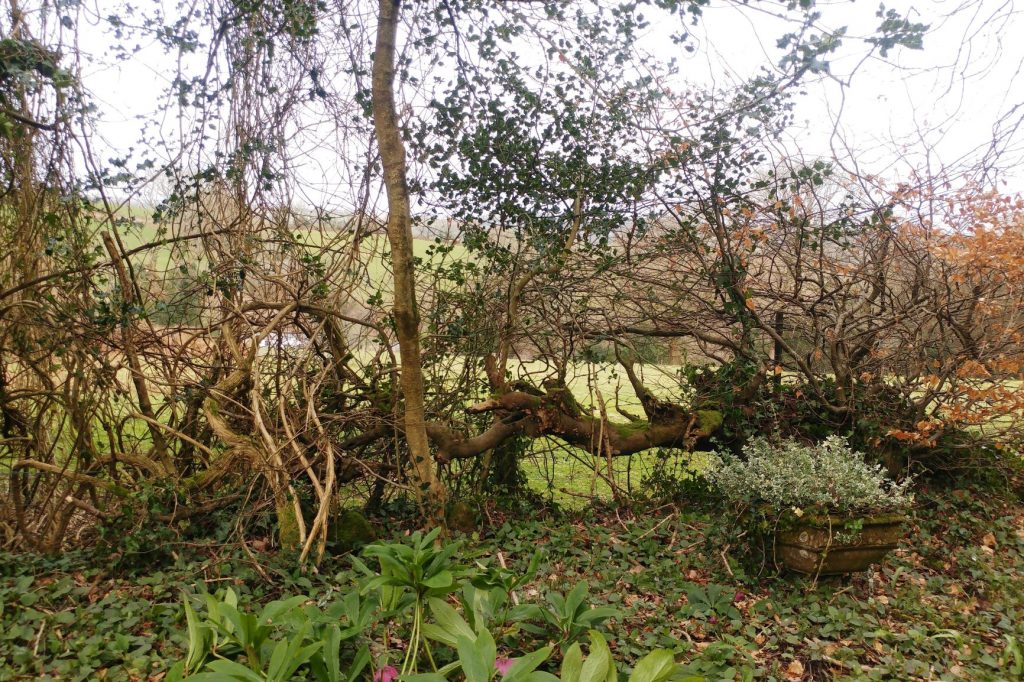 This is not so boring as it looks. The dark branch running sideways is a beech tree which was originally laid as part of the hedge along the edge of the lane. You can see the field I refer to behind it.

Wordsworth wrote about hedges like these in his poem about this very locality in Lines Composed a few Miles above Tintern Abbey:

‘Once again I see
These hedge-rows, hardly hedge-rows, little lines
Of sportive wood run wild’
and they were indeed often woodland trees cut and laid to create hedges as the woods were removed to make fields.

And a vanished home.

The sticky out bit was the end of someone else’s long thin plot. The cottage that was there has vanished completely and the associated land has all been absorbed into the field. There’s someone’s history gone – except that the end of the lane is still there and now at least understood. I think of those people when I look out over that field. 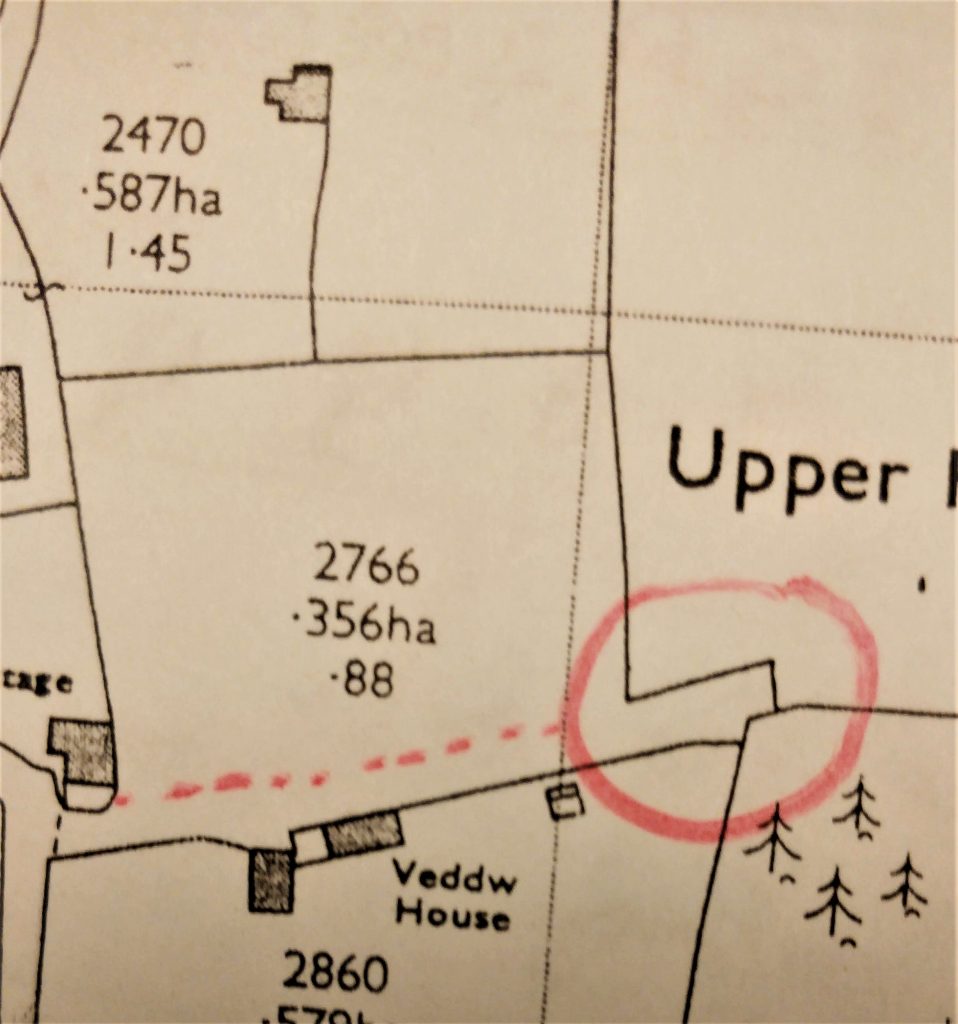 The circled bit is what became the end of the lane, sticking out into the field. On the Tithe Map the field is called ‘Almshouse Field’ and that is another mystery. The lane is marked edged in red here, but these days, between the house and the field, that small building has grown right over what was left of the lane.

We have more remnants of lost homes. In another neighbouring field there is a wonderfully huge mass of snowdrops, signalling where you can still find the overgrown stones which are virtually all that is left of that particular cottage. Alongside is a wreck of an abandoned car. (It’s not easy to imagine just how anyone got it there). 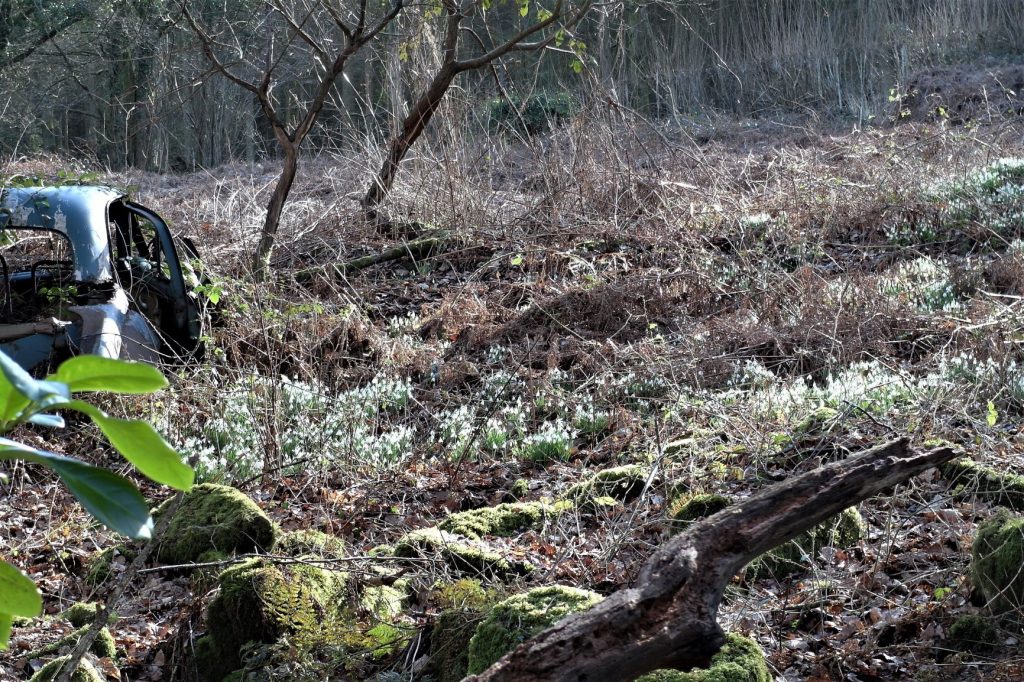 Charles poked around the ruins a little and discovered the base of an iron….. 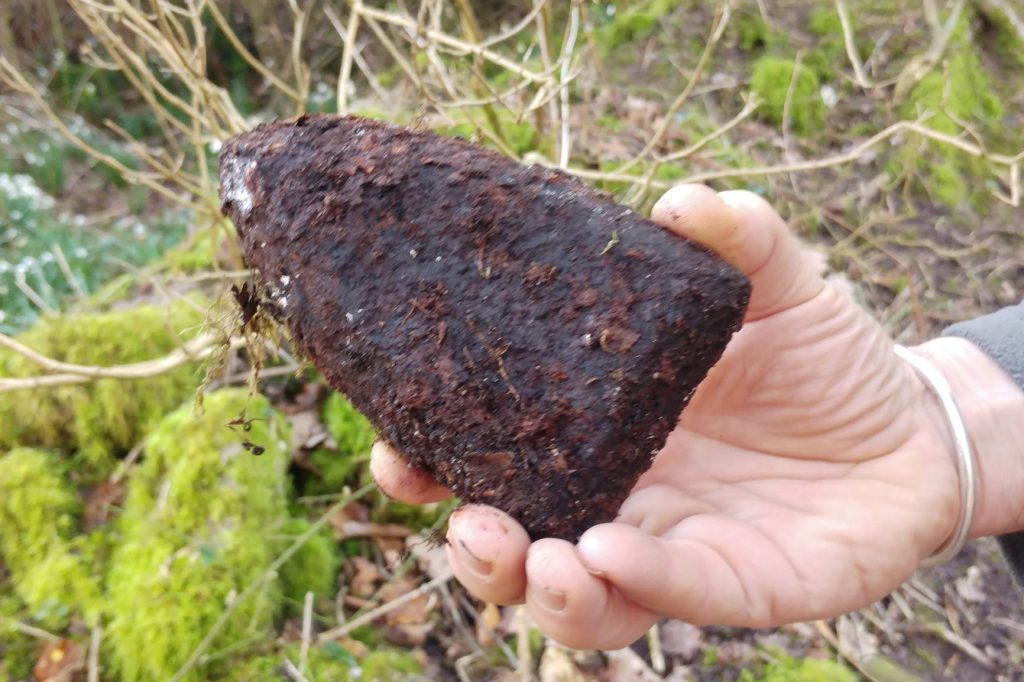 We also have our own ruin, partially rebuilt (and shaped) by Charles. 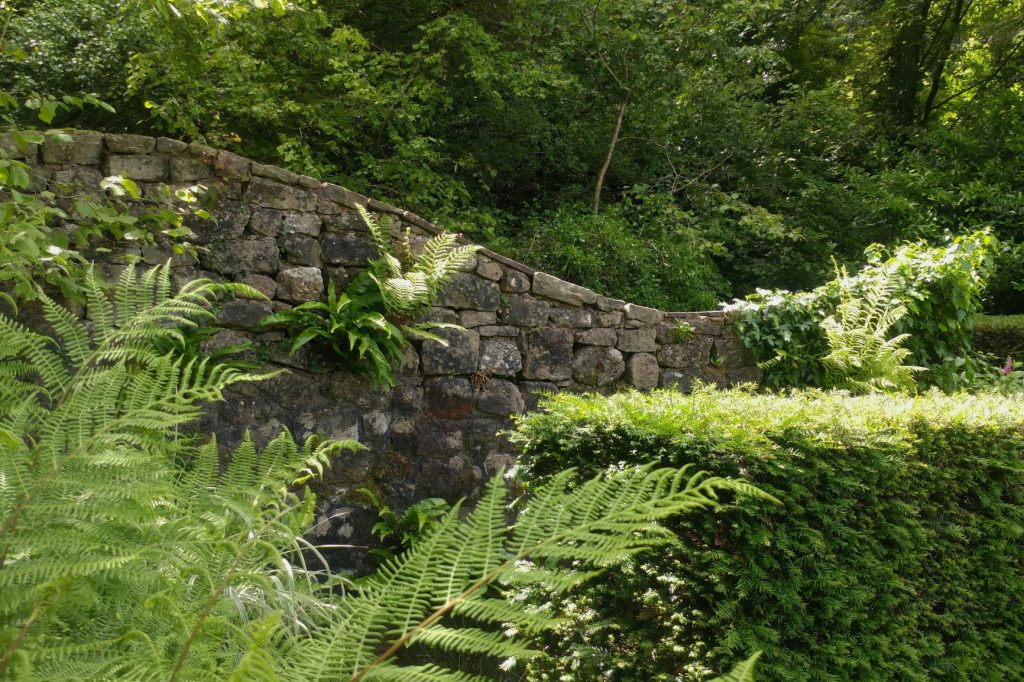 and behind it is a mass of vinca minor (periwinkle)

I can’t help imagining someone happily planting the original piece – perhaps a gift or perhaps a treat from the market. Now it has spread far beyond that person’s maddest imaginings: 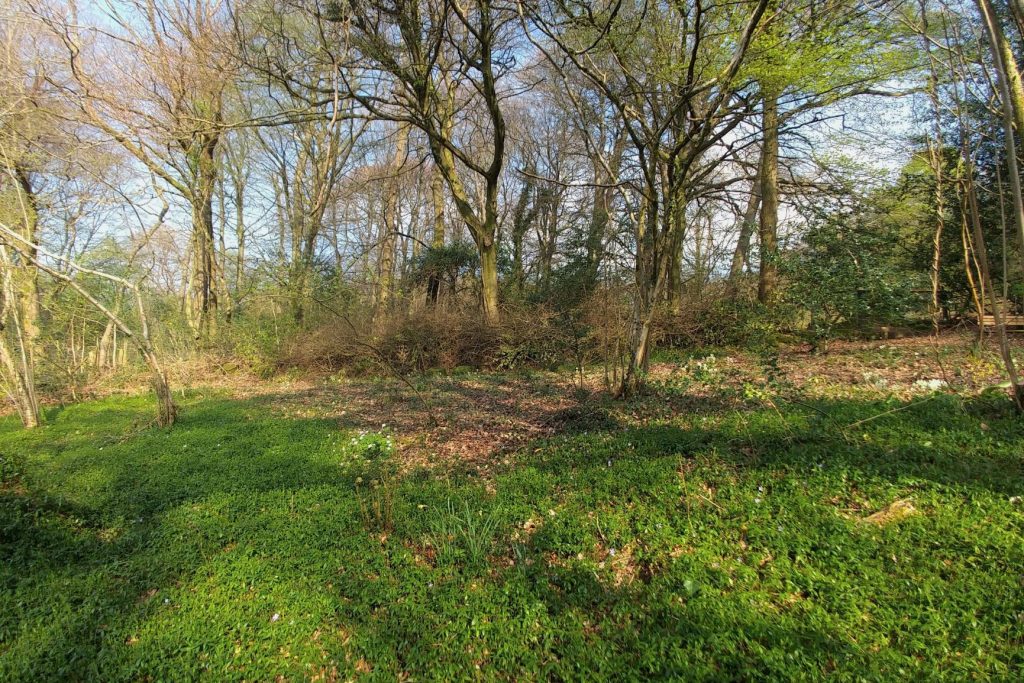 Yep, all that green is periwinkle.

Don’t imagine though that this becomes a mass of flowers. The flowers are quite scarce, suggesting that the plants spread like this before the surrounding trees put  them in quite deep shade.

The same piece of land also has a mass of boulders, which puzzle everyone who sees them. 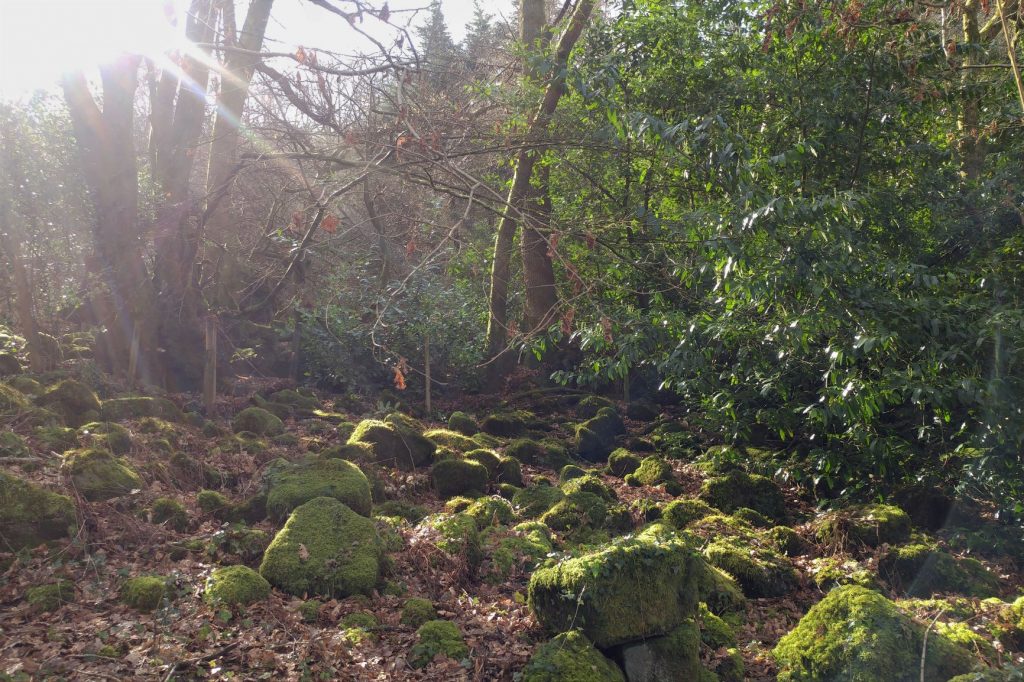 I have come to the conclusion that they were dragged off the fields above there at the time when the Tithe Map shows most of the land to be arable, not long after the Napoleonic Wars, when people were hungry enough to try such marginal farming. We have also found  mules’ shoes, (or donkey’s?) perhaps evidence of how the work was done. 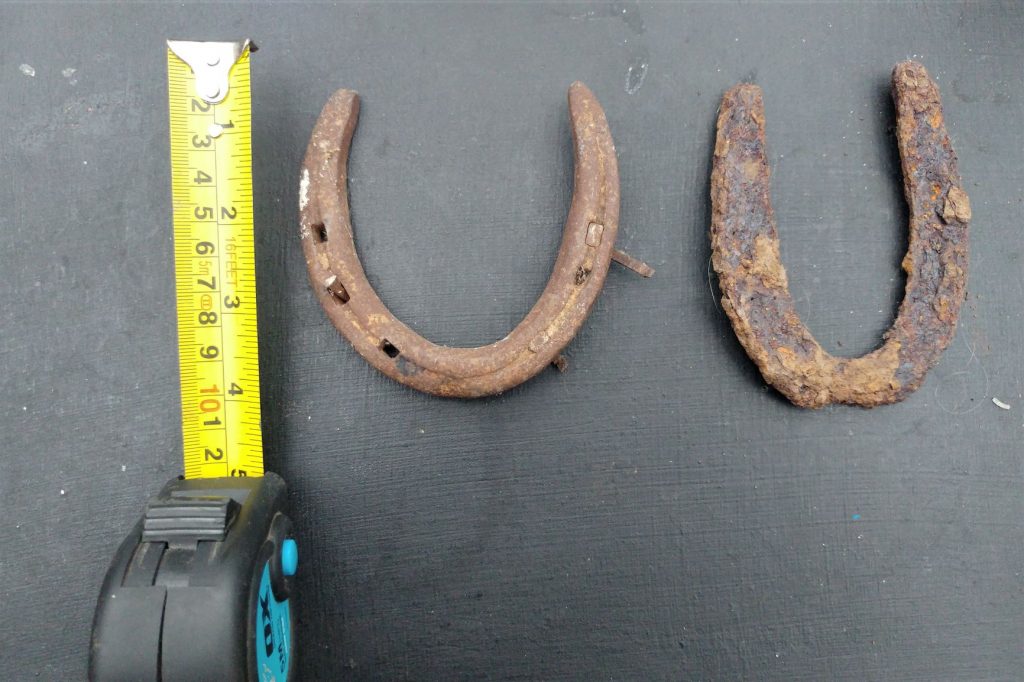 Somewhere in the garden are a pair of scissors, badly missed, but we lost them. And a pair of shears, several secateurs, who knows what else? And I often wonder what our legacy plant may be. We’ve planted thousands of plants: what will stay? Charles puts some of our broken things into a place we have come to call the midden. I have no idea what our mark on the land will be, but I suspect it will be faint. I hope someone will discover our traces one distant day. I wonder if this will stay? (It would take some moving..) 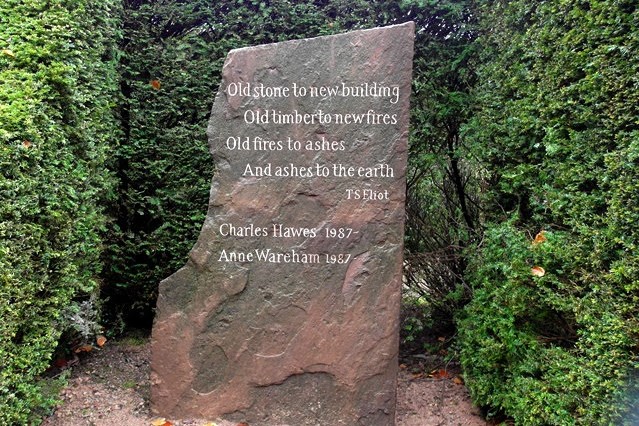 So much of our land has history, even a newly built housing estate sits on land that has been there, and probably used by people, for thousands of years.  And it is salutary to recognise that we will be part of that history. It is so worthwhile to seek out the traces of the past, though it can be hard to see sometimes. It took a visit from an expert on woodland to point out to us an old path – leading to the snowdrop cottage. It can be worth having someone else’s eye on a place.

‘The past is the book that records the steps to where we are now – and the missteps. It is also fragile as gossamer, likely to be brushed away…Remembering matters. In all of the universe, so far as we know, remembering is uniquely human. We must not take it for granted. We must pay attention.’ Neil Oliver.

I once attended a lecture by a famous garden designer, who talked about how sensitive we all should be to a sense of place. This was followed by pictures of garden making, involving bulldozers. Oddly, I saw this as a contradiction.